Samsung pulled off the considerable coup of launching the very first 3D-capable TV in the UK: the huge and mostly magnificent, edge-LED 55in UE55C8000. However, since then we’ve had Panasonic’s plasma technology join the 3D fray too, with the 50in P50VT20. So with LG and Sony 3D TVs also waiting in the wings, now would seem a good time to revisit Samsung’s 3D groundbreaker in the shape of the more mainstream 46in UE46C8000.


As with its bigger brother, the UE46C8000 really is beautiful. As in, ‘possibly the prettiest TV ever’ beautiful. The metallic silver bezel looks resplendent as it glints in the lights of our test room, and the screen’s sub-30mm slenderness is the stuff of technology design legend. 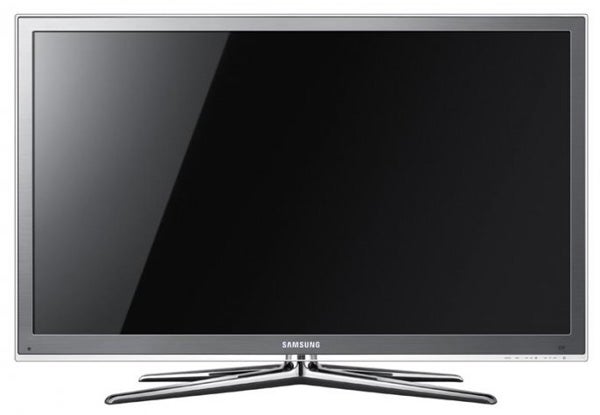 It backs these looks up, moreover, with a fearsome set of features and specifications beyond the 3D headliner. Its connections, for instance, include four HDMIs, two USBs, an Ethernet jack, and a D-Sub PC port. What’s more, in order to make the UE46C8000 easier to hang on the wall, these connections have been mounted at right angles to the screen, for side entry – a really thoughtful idea Samsung has followed through despite the fact that the screen’s thinness has necessitated the introduction of included down-sizing adaptors for a number of the connections.


All four HDMIs are built to the 3D-friendly v1.4 standards, as we would expect, while the USBs and Ethernet ports both warrant more attention on account of their multipurpose natures. The USBs can be used to record high quality video – including HD – from the TV’s digital tuners to most varieties of USB HDD, as well as more predictably playing back a wide variety of video, music and photo multimedia files, and making the TV Wi-Fi via a (sadly optional) dongle.

The Ethernet port can jack into a DLNA-enabled PC, access future Freeview HD interactive services, and get you online with Samsung’s Internet@TV service.


There are even a few games on there, though anyone who’s spent any time on an Xbox or PS3 will find these games laughably unfulfilling.


Samsung’s online efforts feel slightly behind those of Sony and Philips at the moment, but they can be constantly updated, and Samsung isn’t generally a brand that likes to feel like it’s behind anyone, so we suspect plenty of extra services will join the service in the coming months. Also, we should add that the UE46C8000 comes with AllShare software, allowing it to hook up with your mobile phone or other portable devices for further multimedia options.

Samsung has apparently had to work hard with the UE46C8000 to get its LED/LCD technology up to handling the extremely fast frame rates associated with HD 3D sources. It’s a 200Hz screen, for a start; in fact, thanks to a scanning backlight Samsung could easily have called it a 400Hz model had it felt comfortable in following the same ‘optimistic’ labelling system used by one or two rival brands.


Samsung has also developed a faster crystal address technology to help the screen respond fast enough to keep up with the active shutter 3D system, and has introduced blank frame technology to its 3D transmission system to try and make the screen and glasses sync up as effectively as possible. 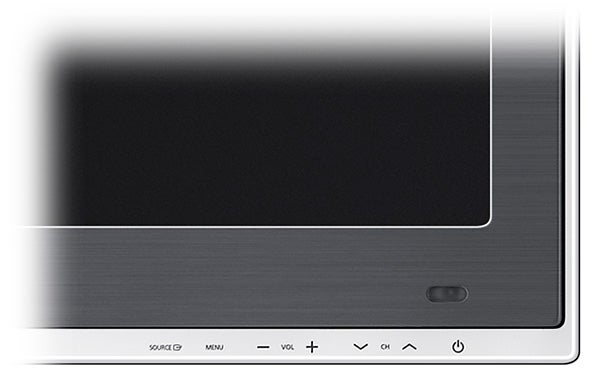 The UE46C8000 also goes big on picture adjustment options, with the most impressive highlights from a fine-tuning point of view being noise reduction routines; offset and gain adjustments for the red, green and blue colour elements; a 10-point white balance adjustment; and even an option for activating a local dimming tool that can activate separately different sections of the edge LED lighting. We didn’t like this option much, as it sometimes produced obvious ‘squares’ of backlight inconsistency. But we’d suggest you at least experiment with it yourself to see if you’re as bothered by the ‘squaring’ problem as we were.


The main pities of the UE46C8000’s set-up situation are that the colour management tools don’t go a touch further, and that Samsung hasn’t followed the lead of its Korean rival LG in seeking endorsement from the Imaging Science Foundation.


Turning to the UE46C8000’s picture performance, as with its 55in sibling it’s mostly terrific. Colours, for instance, radiate with startlingly intensity and striking cross-screen consistency, to an extent that you feel shouldn’t really be possible with edge-LED technology. 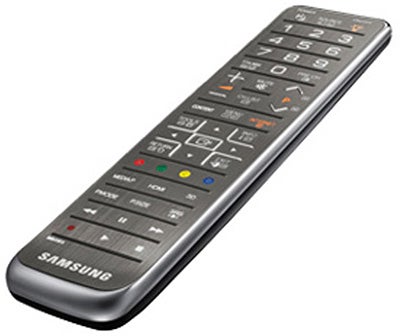 What’s more, this consistency of lighting is retained surprisingly well during very dark scenes, with only the faintest sign of the sort of pools of inconsistent brightness that stood out so much on last year’s 55in Samsung LED models. You can make the patches appear if you leave the brightness/backlight settings too high, but this also damages the contrast and general naturalism of the picture, so hopefully you won’t be tempted to do it!


The colours look credible as well as intense, meanwhile, with believable tones and bags of subtlety when it comes to blends and small tonal differentials. The picture is extremely bright too, yet unusually the UE46C8000’s aggressive approach to pictures doesn’t lead to the exaggeration of video noise. In fact, its performance with standard definition is one of the best we’ve seen, as the set’s upscaling processing adds enough detail to make pictures look sharp while simultaneously being astute enough to recognise source noise and try and take it out.


Not surprisingly, though, it’s with HD that the set really shines. HD images look blisteringly sharp and detailed – a fact which really rams home, too, just how accomplished the UE46C8000’s motion handling circuitry is. There’s practically no judder at all if you use the motion processing carefully, and LCD’s common motion blur issue is also more or less totally removed – factors which have a significant impact on 3D playback, too, helping it look crisp and fluid without looking processed or unnatural.

It’s also striking how bright and colourful the UE46C8000’s 3D pictures look, with markedly less brightness being lost when you’re wearing the glasses than is the case with Panasonic’s 3D pictures.


There’s a great sense of depth and vibrancy to the UE46C8000’s HD 3D efforts too, and we should further add that a built-in 2D-3D processor does a better job of converting ordinary 2D sources into 3D than we would have imagined possible. We can’t imagine many people using this feature all that often – especially as the converted 3D pictures are no match for the real HD 3D deal. But we guess it might just tide a few folk over until more 3D sources arrive, if they’re looking for an instant return on their hefty investment. 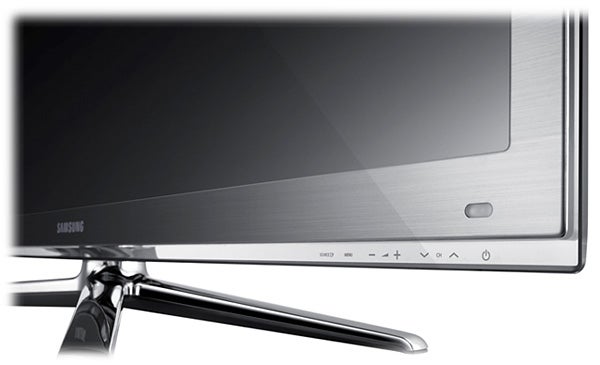 During our review of the UE55C8000, though, we noted significant problems with something called crosstalk noise when watching 3D – and this is sadly true of the UE46C8000 too.


Crosstalk appears as ghosting around objects, with the depth in the field of the object affecting how apparent the crosstalk noise is. For instance, in the ”Monsters Vs Aliens” 3D Blu-ray, the struts of the Golden Gate bridge during the fight scene there almost all suffer quite noticeably with crosstalk, especially those in the distance. Similar if less extreme signs of ghosting are common elsewhere too, including on Sky’s 3D channel and when playing the ”Avatar” 3D console game on our Xbox 360.


In fact, with the ”Avatar” game, the crosstalk noise makes your eyes feel tired after just half an hour or so of play. And finally in the 3D negative column, the picture’s clarity only reaches its best after the TV has warmed up for an hour or so after switching the TV on. 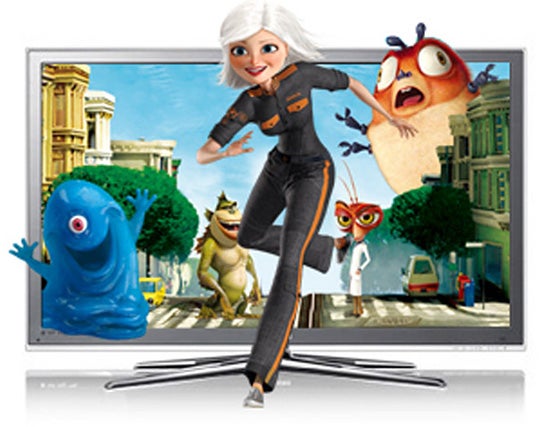 When we reviewed the UE55C8000, it was the first 3D TV we’d been able to spend quality time with, so we weren’t sure how much the crosstalk would be inherent to all 3D TVs. But now that we’ve tested Panasonic’s P50VT20 3D TV, we can say definitively that while the P50VT20 doesn’t completely eradicate crosstalk, it certainly suffers far, far less with it than either of the Samsung models we’ve now seen.


Two more general (not just 3D) concerns find the UE46C8000’s viewing angle rather limited, and its black level response less convincing than it was on Samsung’s previous edge LED generation – a result, we suspect, of Samsung emphasising brightness more to compensate for the brightness lost during 3D viewing.


The UE46C8000 manages to sound slightly better than Samsung’s previous edge LED models, with slightly more volume and ‘punch’ to the sound. But perhaps inevitably for such a slim TV, it still doesn’t sound anything special, thanks to a lack of bass and rather under-powered mid-range. In fact, it sounds slightly less impressive than the UE55C8000 – a result, no doubt, of it having 5W less power per channel than its bigger sibling.


As a piece of technological design, the UE46C8000 can’t be beat. And it’s a stellar 2D picture performer too. These two factors alone could be enough to make the UE46C8000 an essential purchase for some.


However, while we admire the brightness and colour vibrancy of the UE46C8000’s 3D pictures, now we’ve seen what Panasonic’s P50VT20 can do with 3D, we know that the amount of crosstalk noise the Samsung sets suffer with when showing 3D is actually unnecessary. This for us means the UE46C8000 merely confirms that the Panasonic is the model of choice for anyone serious about 3D.