The Samsung UE42F5500 is a 42-inch LCD/edge LED TV that manages to deliver Samsung’s full suite of Smart TV functions despite costing just £550. That puts it in genuine bargain territory, particularly given this is a large major brand TV. You’ll find it hard to find a TV this good for the same price without sacrificing on features. 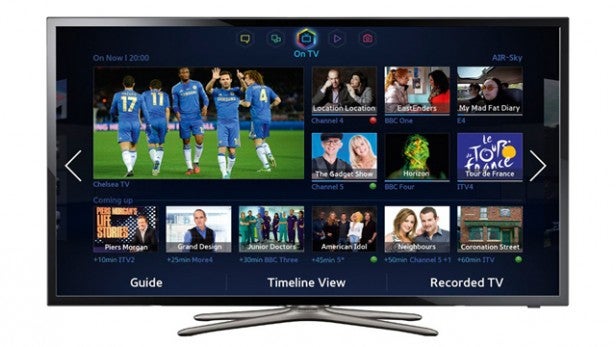 The Samsung UE42F5500 isn’t much to look at by Samsung standards. Its black frame looks very plasticky, and is pretty much a design-free zone with its simple rectangular lines. It’s also incredibly light – great for wall hanging, we guess, but not particularly promising as an early sign of the quality of its innards.

Connections are fairly strong for such an affordable TV, though. Three HDMIs (two mounted for side access, one sticking straight out) will be the main ports of call for most users these days, but other notables include an RF input that connects to an HD Freeview tuner, both LAN and built-in Wi-Fi network connectivity, two USBs for multimedia playback, and an optical digital audio output.

The network ports are not there just as mandatory support for the Freeview HD tuner, either. They also open the door to playing content from networked sources and going online with a full version of Samsung’s current Smart TV platform.

ROUND-UP: Best Value TVs 2014: Which cheap TV should you buy? 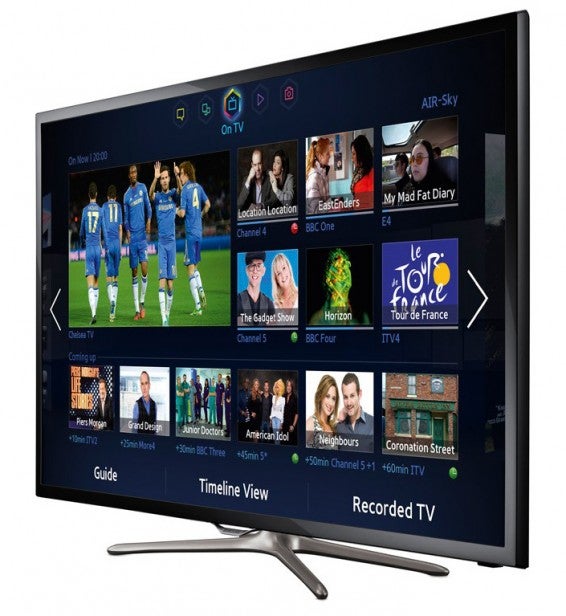 Samsung’s smart TV engine is a pretty successful system in most ways, although the social menu feels like a bit of a wasted opportunity. The star ‘Smart’ feature is the set’s recommendation system, which tracks your viewing habits so it can learn the sort of stuff you like to watch and pick out upcoming programmes from the listings that it thinks you’ll like.

The UE42F5500 doesn’t come with one of Samsung’s touchpad remote designs and there’s no camera built-in, so you can’t benefit from the gesture or voice control options available with Samsung’s higher-end TVs unless you cough up for optional extra gear. But none of these things felt like a particularly big loss, really.

Plus Samsung scores a major smart TV coup by being the only brand to date to offer all four of the free key UK catchup TV services – as well as other on-demand big hitters like Netflix and Lovefilm/Amazon Prime.

Heading into the Samsung 42F5500’s menus reveals a few interesting options, including the usual Samsung Dynamic, Standard, Natural and Movie picture presets (of which only Standard really does much for us); a multi-level dynamic contrast control; a surprisingly in-depth white balance adjustment; a simple gamma adjustment ‘slider’; flesh tone fine tuning; and two lots of noise reduction.

There’s nothing particularly spectacular here we guess – and we need to add too that the set doesn’t offer any 3D playback. But if it performs as we hope it will based on experience of other sets in Samsung’s range this year, there’s nothing missing here we need regret too much. Including 3D!

Wrapping up this section with a quick précis of the UE42F5500’s screen specifications, it enjoys a full HD resolution and a 100Hz motion system – though to clarify this, the native panel refresh rate is only 50Hz. The extra 50Hz is delivered via processing. 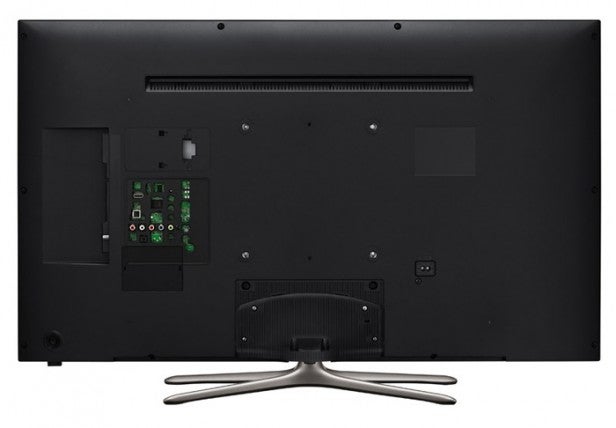 There are a few simple rules we’ve learned to follow with pretty much every Samsung TV. The main one being not to depend on any of the provided picture presets. The Dynamic and Natural settings both set the backlight and contrast levels way too high, causing noise and over-saturated colours, while the Movie preset suffers with a lack of contrast and some backlight clouding – even though it handles noise well and delivers an ‘accurate’ colour palette.

The Standard mode is the best starting point, and aside from making sure the noise reduction routines are turned off when watching HD we guess you could actually use this preset when watching TV in a relatively bright room. 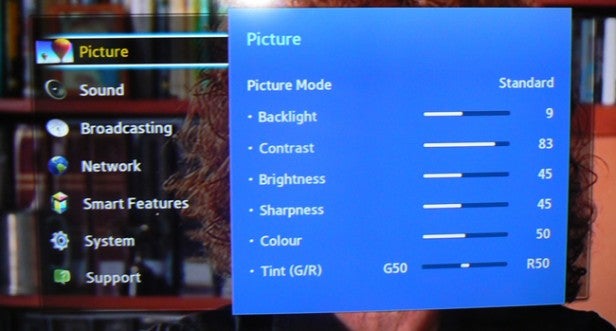 If you want to watch a film in a darkened room on the UE42F5500, though, you should definitely reduce the backlight setting – down to its 9 (out of 20) setting or even 8 if you’re watching a really dark film – as well as getting the contrast down to between 80 and 85 (out of 100). We also personally like to nudge the sharpness down to between 40 and 45 rather than its 50 default, as this tends to make grainy sources look less ‘fizzy’.

Setting up the UE42F5500’s smart features is pretty straightforward – and actually day-to-day use is arguably made easier on the UE42F5500 than it is on Samsung’s higher-end models by the fact you don’t need to get your head around gesture, voice and touchpad remote control options.