While 32-inch TVs still sell by the bucket load, their typical second-room status has seen them become the victim of an unseemly race to the bottom. The £270 Samsung UE32K5600, however, bucks the ‘cheapness first’ trend to give TV and gaming fans a rare small-screen treat.

Aside from some eye-wateringly expensive sets from Loewe and Bang & Olufsen, the Samsung UE32K5600 is probably the prettiest 32-inch TV I’ve seen. It comes dressed in a fetching metallic silver finish, sits handsomely on a striking brushed-metal X-shaped stand, and is almost supernaturally skinny around the back. That slender rear sports a sleek polished black finish too, giving the TV a truly 360-degree appeal.

The set is unusually heavy and robust by 32-inch standards, proving that there’s some genuinely superior build quality going on. That metallic finish isn’t just for show.

The UE32K5600’s relatively premium status doesn’t stretch to one of the minimally buttoned smart remotes you get with some of Samsung’s 4K/HDR TVs. The handset you do get, however, is comfortable to use and mostly sensibly laid out.

One of the best things about the UE32K5600 is how well it can adapt to different room environments. For starters, while all too many 32-inch TVs tend to suffer with a lack of brightness, in its Dynamic preset mode the UE32K5600 really can look punchy in any light bar direct sunshine. 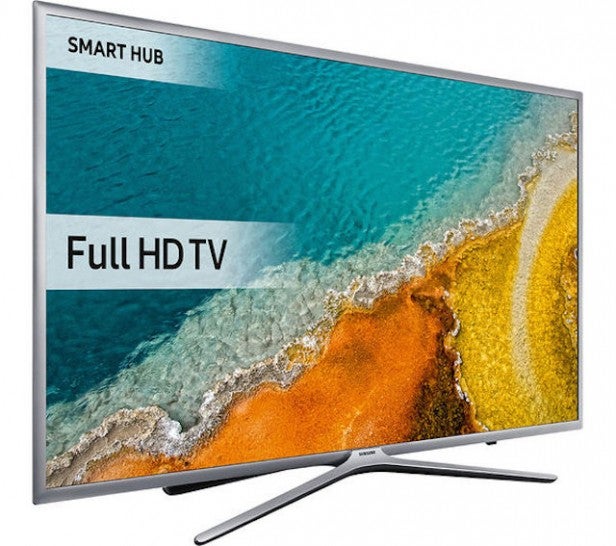 On the other hand, if you’re using a UE32K5600 in a dark bedroom or study, switching to the Standard picture preset and nudging down the backlight and contrast settings to around 15 and 85 respectively gives you an image that holds up exceptionally well by modern small-TV standards.

For the most part the UE32K5600 is fairly forgiving where other settings are concerned. I would recommend setting the Dynamic Contrast function to Low rather than its Medium default, and always remembering to toggle the Game ‘special viewing mode’ on and off when you’re switching between games console and TV/Blu-ray sources.

Finally, don’t leave the Sharpness setting higher than around its 20 level, as otherwise it can cause haloing around fine lines and moiré noise over areas of very fine detail.

Tucked inside the UE32K5600’s screen is a Full HD resolution of 1920 x 1080 pixels, and what appears to be a fairly high-end, edge-lit VA LCD panel from Samsung’s own production lines.

The fact that it’s a VA panel means, mercifully, that you don’t have to worry about the low contrast associated with rival IPS panel types. However, the VA panel also means that the screen’s viewing angle before colour and contrast degradation set in is relatively limited.

Impressively, the UE32K5600 sports a fully functioning version of Samsung’s latest Tizen-based smart TV system. This means all the usual apps – including Amazon Prime and Netflix – are accessible via two layers of icons running along the screen’s bottom edge. This ‘double decker’ interface is much improved from Samsung’s 2015 TVs, making it one of the most straightforward smart TV GUIs around.

The only niggles I could find are that the smart menus run noticeably more sluggishly than they do on higher-end Samsung TVs – though not unbearably so – and that the All4 catch-up TV app wasn’t available at the time of writing.

The UE32K5600’s connections are strong for such an affordable and small TV. Three HDMIs should be ample for what will likely be a second-room TV, as should two USBs for playing multimedia files from USB storage drives. The set carries built-in Wi-Fi too, giving you cable-free access to content available from Samsung’s online platform and DLNA-capable devices on your home network. 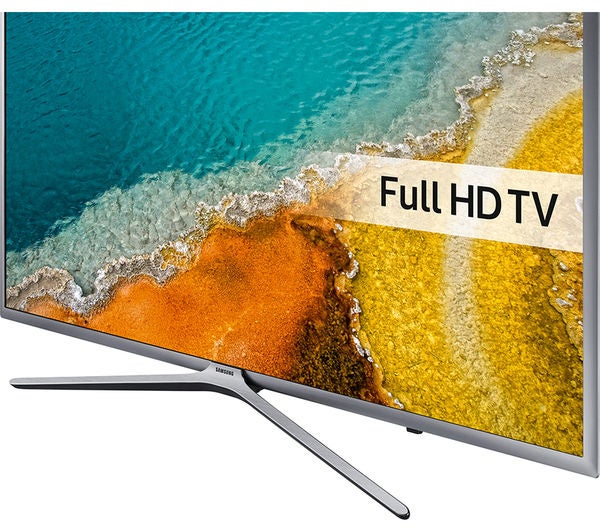 The only other features of note are full white-balance management and Samsung’s LED Clear Motion mode, which uses black-frame insertion to reduce judder and blur very successfully, albeit at the cost of some brightness.

The UE32K5600 is a mostly outstanding performer by current 32-inch TV standards.

Leading the way is an excellent black-level response. Small, affordable TVs tend to leave dark scenes looking washed out and grey, but on the UE32K5600 black means black – or at least something close to it. Especially if you’ve followed the backlight setting advice I offered above.

This black-level response immediately makes dark scenes look more natural and convincing, and helps the UE32K5600’s colours look far more vibrant than those you get from the vast majority of small TVs these days.

It’s not just the depth of the UE32K5600’s black levels that impresses, either; it’s also their uniformity. Provided, again, that you’re not running the backlight higher than its 15 setting, dark scenes appear with only minimal evidence of backlight clouding, even around the screen’s edges. This again marks Samsung’s set apart from the majority of today’s small-screen LCD TVs.

The dynamic contrast system works very effectively on its Low setting too, causing precious few distracting brightness ‘jumps’ as it goes about its backlight manipulation. Even the UE32K5600’s screen filtering gets in on the black-level act, soaking up contrast-spoiling in-room reflections remarkably well. 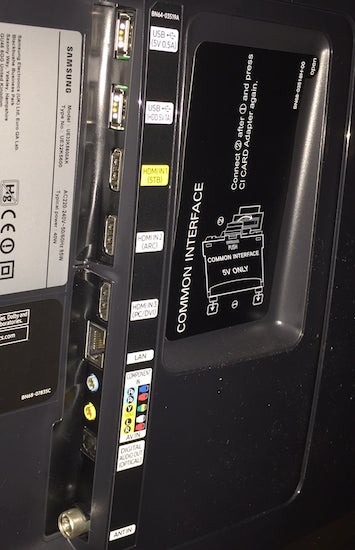 The UE32K5600 is not, predictably, a 4K TV. It does get as much impact from its Full HD resolution as you could reasonably expect of a sub-£300 32-inch TV. Detail levels from pristine Blu-rays are exceptional, and the sharpness remains impressively intact when there’s motion in the frame. The blur and judder witnessed during action scenes on many small-screen TVs just isn’t an issue here.

Just remember to reduce the default sharpness setting slightly if you want to enjoy all this clarity without any accompanying noise.

People thinking the UE32K5600 could make an excellent gaming monitor will be chuffed to hear that I measured the TV’s input lag – the time it takes to render image data received at its inputs – at just 10ms. This is pretty much as good as it gets in the TV world, putting this TV in the same ballpark as professional gaming monitors.

So good are the UE32K5600’s pictures that it seems almost churlish to complain about anything. But there are a couple of issues of which you should at least be aware.

Firstly, with the backlight reduced to remove backlight clouding, the picture is a little too dark to suit a bright room environment, and tends to crush out some shadow detailing. Secondly, if you push the backlight up to around its maximum level, clouding suddenly becomes quite noticeable in the image’s edges and corners.

Regarding the second point, though, unless you feel more troubled by the slight loss of shadow detail than I did, you’ll only really need to push the UE32K5600’s backlight up to levels where clouding starts to appear if you’re watching the TV in a bright room. And in a bright room the clouding is much less noticeable anyway. 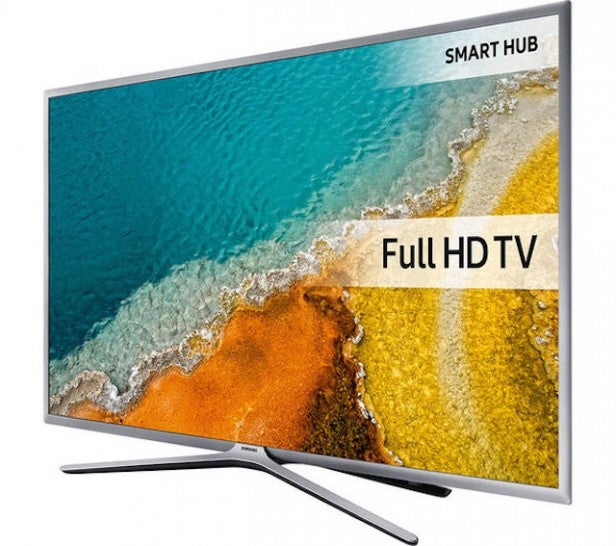 Despite its ultra-slim design, the UE32K5600’s audio also outperforms the vast majority of the small-screen TV competition. Treble details – even shrill screams or alarms – are delivered without sounding harsh or brittle. The mid-range is open enough to avoid sounding congested or overtly narrow during action scenes. Voices project well, avoid distortion, and remain clear during loud moments. Most surprisingly of all, the UE32K5600 even serves up a reasonable amount of bass.

The UE32K5600 is far from the cheapest 32-inch TV around these days. That said, I still consider it a bargain thanks to its rare (for the small-TV market) combination of useful smarts and really impressive picture and sound quality.

While you can get cheaper 32-inch TVs than the Samsung UE32K5600, you’ll struggle to find one that’s better.