Unlike a certain other Korean brand, Samsung doesn’t seem shy this year about letting us check out its cheap TV models as well as its high-end efforts. The Samsung UE32EH5000 is a case in point, as its stripped-down feature list, relatively small 32in size and remarkably low £299 price tag instantly reveal it to be very much one of Samsung’s most mass-market – maybe even second-room – propositions.

But while this might mean we don’t have to spend long stretches of this review delving into such premium tricks as online features, alternative control systems and 3D picture quality, the 32EH5000 could still potentially be a good TV. Basically, if it delivers good pictures and sound for its money, that will be more than enough itself to put a smile on the faces of not only us, but potentially a very large group of cash-strapped TV punters.

The use of the letters ‘EH’ rather than ‘ES’ in the 32EH5000’s name reveals that it’s not one of Samsung’s ‘super slim’ models. However, from the front, at least, it still looks fairly trim, thanks to a bezel that’s only a couple of centimetres across. The bezel’s glossy black finish is attractive enough too, and there’s a gentle arc effect on the bottom edge that’s also easy on the eye.

The Samsung 32EH5000’s rear does admittedly stick out a bit – OK, a lot – further than Samsung’s higher-end TVs. But as we so often point out, unless you’re a bit odd you’ll spend considerably more time looking at the front of your TV than its rear, or even its side.

The 32EH5000’s back does disappoint in one way, though, and that’s with its connections. For starters, they include only two HDMIs when we’d like even a fairly cheap TV now to have three. There’s also only one USB for playing back photo, video and music files, and no built-in Wi-Fi. Nor is there a D-Sub PC port for analogue connection of a computer. You can’t record to the USB from the built-in tuners either. 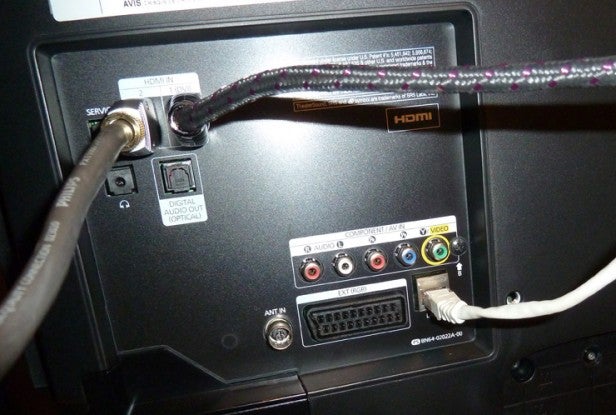 In one bit of good news, though, one of the tuners is a Freeview HD affair, backed up by the required LAN port. It’s just a pity this LAN port does not permit you to either go online for any of Samsung’s ‘Smart TV’ services, or to access content on networked PCs. But then what did you expect of a £300 32in TV? A built-in PC and butler?!

Searching through the 32EH5000’s onscreen menus in search of features, we were pleased to find a Backlight adjustment as well as brightness and contrast tweaks, while an advanced settings submenu includes such surprisingly subtle controls as different settings for the TV’s dynamic contrast system; a black tone booster; a flesh tone adjustment that treats skin tones in isolation; a white balance adjustment that lets you adjust the offset and gain of the RGB elements; and a small amount of gamma flexibility.

There are also two separate noise filters, and a small selection of picture presets. Though as usual with Samsung TVs at the moment, these presets aren’t especially helpful, as they all push contrast and backlight output too hard, causing noise and a few colour problems.

After toning things down a bit, though, our tests found Sky HD news feeds and a variety of daytime shows from the onboard BBC and ITV HD channels all looking startlingly good for a £300 32in TV.

Colours are much more vibrant and appear to enjoy a wider tonal range than you usually get for so little money. Plus they enjoy fairly natural tones aside from a skintone issue we’ll get to later. 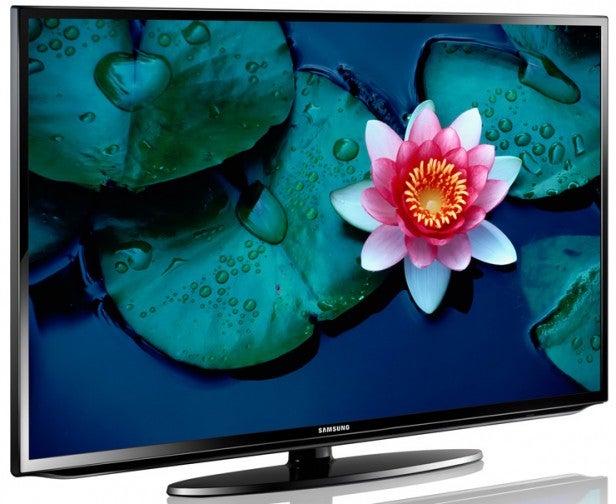 Pictures are decently bright too, avoiding another common cheap TV failing and thus becoming a perfectly acceptable second-room option for light environments like conservatories and kitchens.

The single most pleasant surprise where these first HD impressions are concerned, though, is the apparent contrast of the 32EH5000’s pictures. For alongside the rich colours already noted the screen delivers extremely punchy whites alongside what look at this stage at least like really respectable black levels.

We added the ‘at this stage’ qualifier back there because experience has shown that the sort of predominantly bright content that makes up most daytime TV viewing can give a ‘false reading’ where black level response is concerned. In particular, it’s very hard indeed to see potential backlight consistency flaws until you switch to the much more dark-dominated scenes contained in many films. 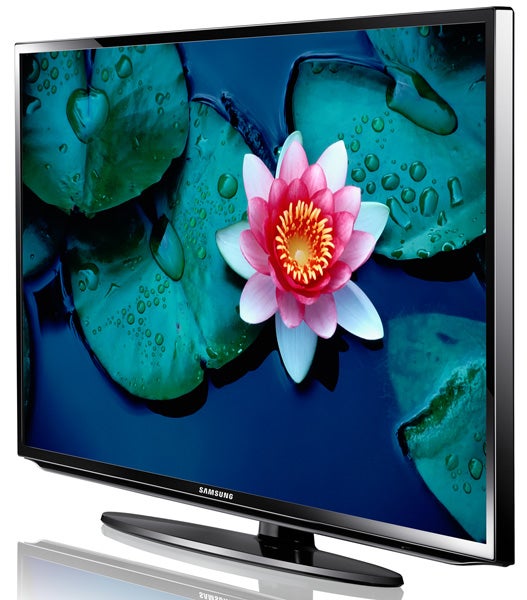 So let’s make that switch now… And actually, the 32EH5000 doesn’t fall down nearly as badly as we’d have expected. The biggest relief while watching almost completely dark footage is that the screen doesn’t suffer badly at all with backlight clouding. There’s a faint patch of extra brightness towards the bottom left corner, but this is hardly ever obvious enough to be in any way distracting. Especially if you’ve taken the TV’s backlight and contrast levels down to 11 (or less) and around 85 respectively.

Making the backlight uniformity all the more impressive is the fact that the 32EH5000 can produce a vastly superior black level response to most if not all other new TVs at its price level. Sure, there’s a shade of greyness over parts of the picture that would ideally look perfectly black. But this grey is nothing like as strong as the ‘mist’ that spoils so many budget TV pictures, leaving you able to feel much more involved with dark scenes – especially as the depth of black levels achieved helps dark colours look more natural, too.

It’s not entirely unheard of for other budget TVs to deliver a decent approximation of black colours. But usually the best budget black efforts only come at the expense of huge amounts of brightness, resulting in some heavy loss of shadow detail. The 32EH5000, though, retains a very decent amount of shadow detail in dark parts of its pictures, proving that its black level response is down to the quality of its panel and lighting technology rather than a basic willingness to take excessive brightness out of pictures during dark scenes.

While the 32EH5000 is predictably at its best with HD, it’s also perfectly watchable with standard definition. SD images don’t look as soft or noisy as might have been expected, and motion blurring doesn’t increase much either. There’s a slight drop off in colour naturalism, but it’s not a big deal, and is certainly nowhere near as damaging as it customarily is at the budget price level.

The 32EH5000’s pictures certainly aren’t wholly immune to its budget price. Skin tones look a bit mannequin-like, for instance, thanks to an apparent lack of subtlety in rendering marginally different skin shades.

Also potentially problematic to some people is the 32EH5000’s very limited viewing angle, which finds contrast and colour saturations both reducing quickly if you have to view from more than 30-35 degrees off axis.

Does more than it needs to

Just to be absolutely clear, meanwhile, you can do better in almost all picture areas – as well as likely getting Smart TV features – if you spend more money.  But this is kind of beside the point when you’re talking about a £300 32in TV. All you can reasonably hope for with this sort of price-focussed product is that the 32EH5000 is better than other budget sets and comfortably outperforms its price – two targets it hits remarkably well.

A 32in TV as cheap as the 32EH5000 clearly has potential as a gaming monitor, despite its lack of a D-Sub PC port. So we were very pleased to record an average input lag figure of just 25ms. This is one of the lowest around right now, and should mean you can safely game on the screen without your performance being significantly affected.

The 32EH5000’s audio talents aren’t quite as far above expectations as its video ones, but they’re still more than acceptable for the set’s money. The biggest weakness is that there really isn’t much bass, leaving action scenes sounding a bit thin and trebly. The mid-range is quite clean and broad, though, helping voices remain clear even under duress, and trebles are well-rounded enough to typically avoid harshness.

Despite its lack of Smart TV and DLNA features, it’s pretty difficult to see how you could reasonably expect the 32EH5000 to be much better than it is, for the simple reason that its picture quality is leagues ahead of what such a puny amount of money would usually get you.

Samsung might have found itself up against stiff competition at the top end of its range this year from the likes of Panasonic and especially Sony. But if the 32EH5000 is anything to go by, Samsung is still the brand to beat when it comes to the mass market part of the TV world.