Any twenty-something student or professional will have become used to fitting their lives into small spaces. Live in any of our over-populated metropolises and this particular problem becomes even more acute as the average budget barely stretches to a shoe box. As such, anything that does the job of two or more devices is invaluable. Enter the Samsung SyncMaster LD220HD, a 22in HDTV and monitor hybrid sporting a 1080p LCD panel and a highly tempting £200 retail price.


In terms of features the LD220HD is similar to the Samsung SnycMaster P2370HD we reviewed last year. However, while the P2370HD looked like a traditional monitor (albeit a stylish one), the LD220HD has a lower-profile design akin to a photo frame. Clad entirely in glossy black plastic, its slim bezel and comparative shallowness means it strikes a compact pose despite its sizeable 22in panel. An adjustable leg at the back provides somewhat limited adjustability, but it holds the monitor firmly and has a hole for cable routing. 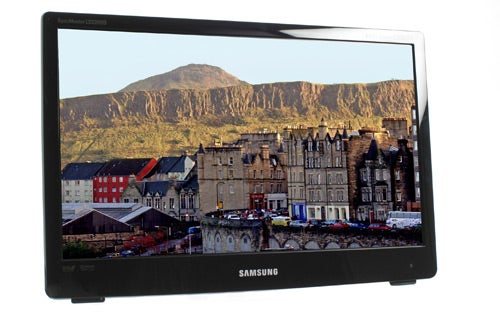 Being an HDTV and a monitor, the connectivity reflects its versatility. Alongside HDMI and DVI video connections, which are common enough on LCD monitors, are component video and audio, SCART, a headphone jack, and a CI (Common Interface) slot for Freeview subscription channels. There’s also a USB port, though it’s only for servicing, and an EX-Link port for use with a motorised mount. There are VESA mounts to facilitate the latter. All these connections, apart from the side-mounted CI slot, are at the back pointing outward, making them easy to access.

Naturally a remote is included too and it’s a damn good one. Buttons are arranged logically, with important functions like volume and channel controls given prominence, and have a nice positive action to them. We had no problems with range of the remote, either, and it sits very comfortably in the hand.


This excellent remote is teamed with a superb user interface and EPG that has clearly been lifted straight from Samsung’s TV division. Menus are thorough and intuitive, even going so far to explain what specific options do, while the EPG is clean, functional and includes picture-in-picture so you can continue to watch a channel while scanning the listings. If you ever wonder what you’re paying for from big name brands, such finer details are it. 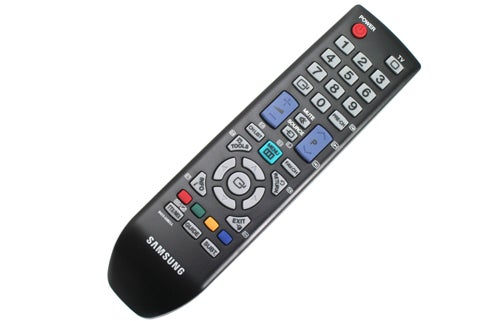 Should you ever lose or not need the remote these menus can also be navigated using the touch controls on the monitor. These are hidden by default, but tapping near the glowing power icon (and button) reveals them. They work okay and logically, but you wouldn’t want to rely on them alone so don’t lose the remote!

No new monitor could do without an outlandish contrast ratio claim. Samsung is no less guilty and the LD220HD has “50,000:1 dynamic contrast” etched into the top corner. In tangible terms the native rating is 1,000:1, brightness is 300 nits and the quoted grey-to-grey response time is 5ms. These are all par for LCDs based on TN panel technology and it’s difficult to glean much from them.


We’ll deal with Freeview TV performance first, which is about as good as you could demand from a cheap, non-specialist TV trying to cope with Freeview’s increasingly fuzzy transmissions. It’s perfectly watchable and doesn’t suffer from any alarming or distracting issues, but it’ll rarely astound you. 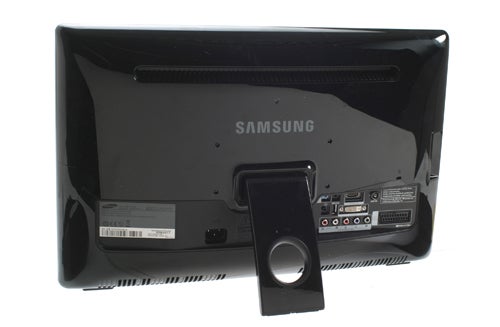 We were pleasantly surprised by the speakers, though. These are housed at the rear, projecting upwards from a vent at the back, and provide decent clarity with a little depth, too. Bass obviously isn’t a strong point and the speakers struggled with the guitar heavy opening theme to Casino Royale, but on the whole clarity is excellent and the SRS TruSurround HD processing adds a little ‘oomph’ to proceedings.


Viewing angles are good enough, too, particularly for the kind of small room this display is likely to be used in. Samsung has also implemented a somewhat odd mode called MagicAngle. This looks to compensate for any contrast lost from viewing the screen from an angle, be it slightly below (Lean Back Mode 1/2), above (Standing Mode) or from the side (Side Mode). 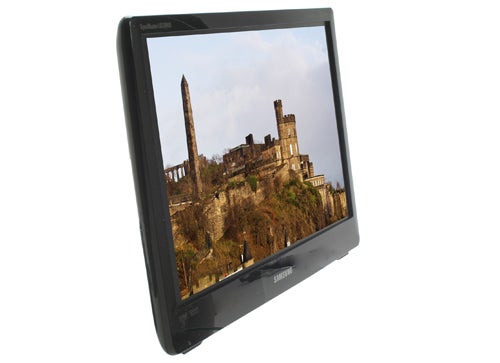 All this boils down to is adjusting the brightness and contrast, which is of occasional but fairly limited use. We found the first of the two lean back modes (the least extreme one) was useful from time to time, particularly as the natural angle of the screen is slightly upward, but beyond this it wasn’t really necessary.


Much the same can be said for the usual variety of picture modes available, which vary depending on what source you’re using. We’d especially avoid any that makes significant use of the Dynamic Contrast mode. Anything above the ‘Low’ setting lacks the speed and subtlety to be usable, with changes in brightness far too obvious and distracting. It’s not as if such measures are strictly necessary either, doing very little to enhance any type of content.

Of course the LD220HD must also function as a monitor and here it does another commendable job. Particularly impressive is the clean white-level, which makes working on documents a good deal easier. In synthetic pattern-based testing we found the LD220HD produced more subtle grey shades than many TN-based LCD monitors, but this was with the caveat of some yellowness creeping in. Trained eyes will also spot the tell-tale signs of dithering, which was particularly obvious at the darker end of gradients. In real-world use, however, these problems should rarely be evident. 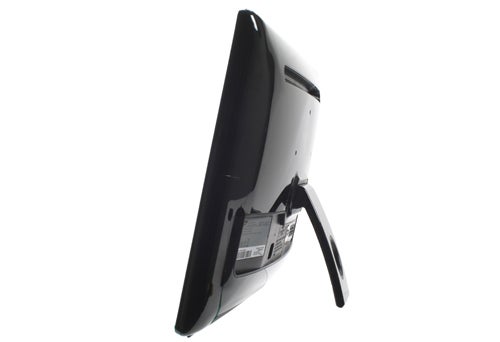 This is particularly true of HD content, which the LD220HD does a good job with. Its Full HD, 1080p resolution really helps here, making high quality video look sharp and detailed, while colours are punchy without looking oversaturated or unrealistic. Finer details in shadows are also well-produced and the display’s warm default colour temperature, indicated by the yellow tinge to grey tones, does suit film content.


It also helps that the backlight bleed issues evident on the P2370HD seem to be under control here, with just a tiny hint at the top and bottom edges. Consequently the black level is okay for an LCD, particularly if you dial back the backlight setting when suitable. 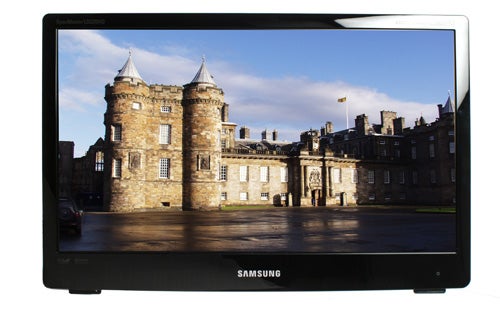 Only motion really highlights the modest origins of the LD220HD, with panning shots in particular suffering from stuttering, blurred motion. This, of course, is an intrinsic weakness of LCD technology and given the price of this monitor – and £200 is seriously good value for such a versatile monitor – it’s no surprise there’s little to no processing to smooth this out.


Anyone who demands flexibility on a small budget should seek out the LD220HD. For £200 it offers truly stunning value, particularly as the performance and attention to detail of the set far outstrips anything you’ll see on no-name alternatives.