We’ve been a little disappointed with the LED-backlit monitors we’ve reviewed to date. All of them, including theBenQ V2220, Iiyama ProLite E2472HD and BenQ G222HDL (which won an award on account of its excellent value), have essentially been budget TN displays with limited connectivity, rudimentary ergonomic adjustability and mediocre image quality. Today we’re taking a look at a monitor that might change all that: the LED-backlit Samsung SyncMaster BX2240.


Yet another Full HD, 21.5in, TN-based monitor, the business-oriented BX2240 sets itself apart with a fully-adjustable chassis that emphasizes form over function, and what at first glance appears to be some of the best image quality we’ve seen from this type of panel in a while. We’re cautiously optimistic. 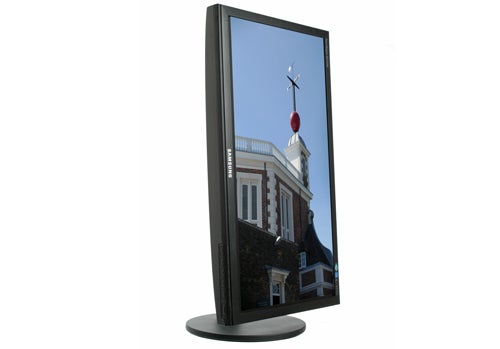 Our BX2240 came very securely packaged with power, VGA and DVI cables, in addition to a quick-start guide and driver CD. The monitor itself comes in two parts: the screen with attached leg, and the base. Putting them together is as simple as can be, and after tightening a thumb-screw they fit securely. Finally you need to remove a metal pin to release the spring-action, height-adjustable stand.


In terms of design we really like the BX2240. Being aimed at business users, it thankfully eschews the fingerprint and dust-loving glossy finish found on too many other LCD monitors for a uniform lightly-textured matt black that holds up far better to wear and tear, and requires less maintenance too. 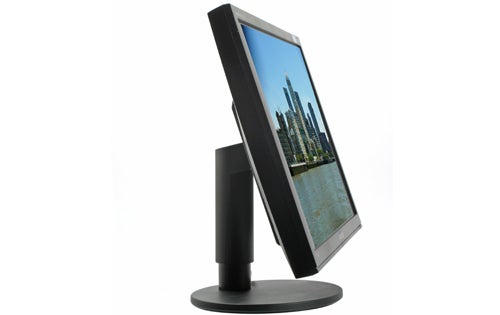 While not as anorexic as most LED-backlit monitors we’ve come across, the BX2240 is still a relatively slim 3cm at its edges, and features a lovely thin 1.7cm bezel (extending to 2cm at its base). Combined with its pivot abilities, this makes the BX2240’s chassis good for multi-monitor setups, though viewing angles will obviously play an important role here.


Adjustability is quite simply the best we’ve seen on a TN panel-based monitor since the excellent BenQ G2200WT. The solid, rounded leg allows for a generous amount of height adjustment, lifting the monitor’s base from 3.5cm to a comfortable 13.5cm off your desk. This immediately puts Samsung’s contender into a class of its own, as with most budget equivalents you need a stack of magazines to alter your monitor’s height. In addition there’s a large degree of tilt both backwards and forwards, nearly 90 degrees of swivel in both directions and, last but not least, pivot. Impressive stuff.

Connectivity on the SyncMaster BX2240 is quite basic, with DVI and VGA being the only options. However, this is certainly adequate for a business-oriented screen, and you can always plug in an HDMI cable via a cheap adapter. It’s really easy to hook up the cables thanks to the monitor’s connectors facing outwards, though there’s no cable management at all.


Build quality is generally good, though this monitor doesn’t feel anywhere near as solid as the Samsung SyncMaster F2080. There’s a little more creak than we would ideally like on the chassis, but to be honest it’s no cause for concern and the BX2240 shouldn’t suffer any build-related issues whether at home or at work.

At the bottom of the bezel, discreet grey icons mark the buttons hidden underneath it. A very subtle dark-blue LED demarcates the power button. All the buttons are also marked by physical protrusions and offer positive if somewhat stiff feedback, making them fairly easy to press. They’re not the best we’ve come across, but do the job.


Samsung’s OSD is visually attractive despite only using black and white with blue for highlights. Shortcuts are fairly intelligent and intuitive, with dedicated secondary button functions for aspect ratio, brightness and source switching. Of course VGA’s auto-calibration gets its own button altogether, but on a business monitor that’s not a bad thing.

Along with the basics common to all monitors, in the BX2240’s OSD you’ll find adjustments for sharpness, colour tone with individual RGB controls, gamma, MagicBright (a number of brightness presets including dynamic contrast options) and MagicColor (colour presets including Aqua, Sepia, Green and Greyscale).


Also among the options is MagicAngle, which lets you choose from a variety of presets to optimize brightness and contrast for viewing from various predefined angles. It works reasonably well, but obviously wouldn’t be necessary in the first place if the BX2240 used a superior panel technology. Like the Samsung LD220HD that also had this feature, it feels like an artificial solution to a fundamental problem.

Thus far the BX2240 has consistently impressed, but the most important factor for any monitor is always its image quality. Straight off, our subjective first impressions of the BX2240 were positive, as it lacked that slightly washed-out quality that’s common with TN panel-based displays (and LED-backlit ones especially). Instead everything was bright, clear and well-defined, with crisp colours that remained faithful rather than oversaturated.


Horizontal viewing angles are also above par for this type of panel, but this is tempered by some severe vertical contrast shift across the top of the panel. This won’t be a problem in most day-to-day usage scenarios, but will perturb anyone planning to use this display for watching video or playing games. In this regard, this Samsung is inferior to many competitors, such as the Iiyama ProLite E2472HD. 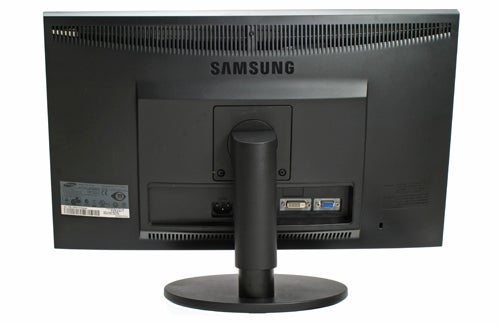 Backlighting is just slightly uneven, though there’s no sign of any backlight bleed. As usual for a TN-based display, the BX2240 doesn’t cope well with the darkest and lightest ends of the greyscale, but it can achieve reasonable dark detail resolution at the cost of white purity. Even then you will miss out on some subtle dark detailing in films and games.


Post-calibration colour production is fairly realistic, though graphical enthusiasts and photographers certainly need not apply due to the aforementioned contrast-shift alone. Banding is minimal and there are no obvious artefacts. Finally, at the correct setting sharpness is excellent, which should help reduce eye-strain through prolonged use.


Also worth noting is that this monitor’s minimum brightness is lower than most, so it may suit those with particularly sensitive eyes who work in a well-lit environment. Another potential benefit for office users and consumers is that,, even when playing video at ideal brightness, the BX2240 maintained a frugal 16W maximum power draw. This is bound to be beneficial to the electricity bills in a large office. 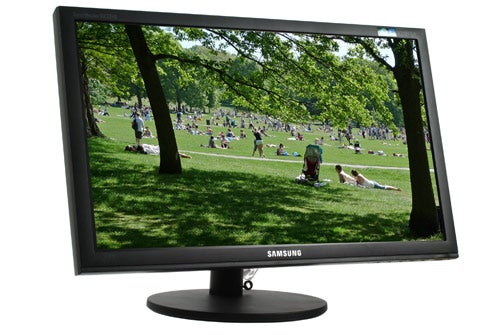 Slightly iffy vertical viewing angles aside, then, the BX2240 has a lot going for it, despite its premium over similarly-sized but non-adjustable Full HD displays such as the £130 BenQ G2222HDL. However, somewhat predictably, its stiffest competition comes from another Samsung product, the SyncMaster F2380. The bigger, Full HD cousin of the award-winning F2080, the £220 F2380 matches this model for adjustability and resolution but has a superior cPVA panel, better build quality and an extra DVI input. If you have the extra £30 then we’d encourage you to spend it, but if your budget is tight and you need adjustability then the BX2240 is still a good option.


While not without its weaknesses, excellent adjustability, frugal power use and slightly above average image quality make the Samsung SyncMaster BX2240 a good option for office and home users who value practicality over flashiness.