It’s taken a long time but we’ve finally got our hands on a 22in monitor from Samsung. Over the last few months we’ve looked at number of examples from Miria, IIyama, Viewsonic and Acer but with a strong presence in the PC display market many people will be considering Samsung’s effort – the 226BW.


If the decision was based on looks alone then the Samsung would have things wrapped up before we even left the starting blocks. Over the past couple of years Samsung has really raised the game when it comes to display design and the 226BW takes no prisoners in that regards. The glossy black bezel with pleasing curved edges is beautifully offset by a smart silver power switch at the bottom right with a cool blue light present behind it. A silver strip runs underneath, with the OSD commands subtly imprinted and the buttons hidden underneath. 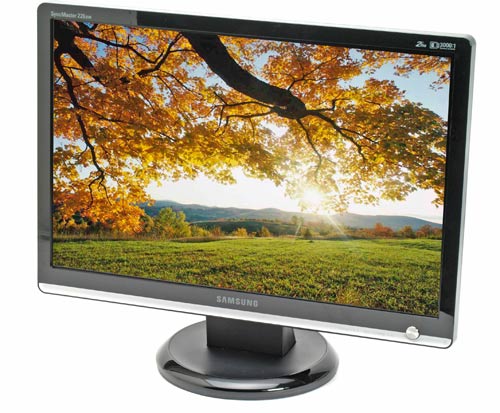 The Samsung logo and model name are placed at the bottom centre and top left respectively, but I don’t see the need to have specifications such as ‘2ms’, and ‘3000:1 Dynamic Contrast’ permanently etched on as well. After all, if you’ve bought the monitor there’s no need to keep advertising the specs to you forever.


The stand is not height adjustable but it is circular, which is a simple method of getting the whole display to rotate. It does tilt forward and back and it is wall mountable with 100mm VESA standard holes. There are no extras such as USB ports or built-in speakers and round the back connectivity is straightforward too – just VGA and DVI.


On the up-side the DVI port is described as HDCP compatible, the only 22in we’ve seen that does, which gives it a huge boost over its competitors. If you have any intention of watching Blu-ray or HD DVD on your PC at some point in the future, HDCP support is a necessity, which immediately rules out the competitor 22in displays that we’ve looked at so far. There’s no HDMI connector, but converters are easily available.


Samsung has the rear ports completely covered by a plastic cover, which ensures that even with everything plugged in, it looks clean and elegant even from the rear. 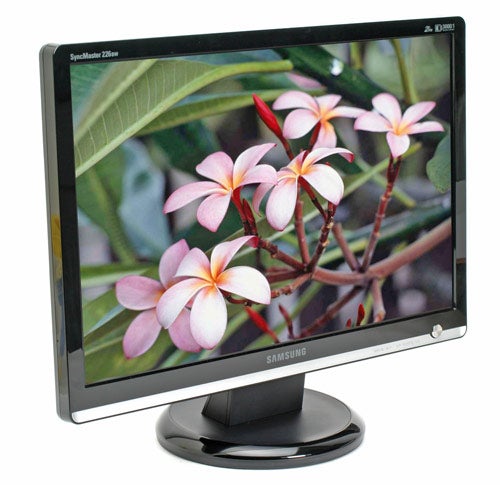 Neither the manual on the CD nor the Samsung Web site reveals the technology used in the panel. The headline figure is the 2ms grey-to-grey response time, which normally infers that the panel is a basic 6-bit TN. However, the quoted figure for the amount of colours configurable is 16.7m, which is only possible from an 8-bit panel. Either way, the viewing angles are less than that available from IPS panels – just 160 degrees both horizontally and vertically. However, in reality that’s enough for most users and good enough so that people don’t have to be right in front of it. However, you still can’t view from too far above or below.

The OSD is fairly comprehensive. You’d expect the Brightness and Contrast controls but there are many colour other adjustments available too. The Magic-Color option provides a colour boost, with a demo mode splitting the screen in two to show its effects – more on that later. Color Tone lets you choose between Cool, Normal, Warm and Custom and you can manually adjust the Red, Green and blue Colour levels and Gamma. In the Image adjustments option you can adjust Sharpness. Coarse and Fine are also listed available but these options are not adjustable.

Pressing the second OSD button from the left brings up the MagicBright menu with each press selecting one of seven presets – Custom, Text, Internet, Game, Sport, Movie and Dynamic Contrast.


I set up the monitor on my desk as a replacement for the Acer AL3316w 22in model, and even aside from the much more aesthetically pleasing housing I could tell straight away that the image quality was better. The viewing angle was superior with the whites of the screen not fading to yellow when moving off centre, which was an immediate plus. General Windows, Office and browser use was excellent with 226BW delivering a bright clear white, while text was sharp and easy to read. 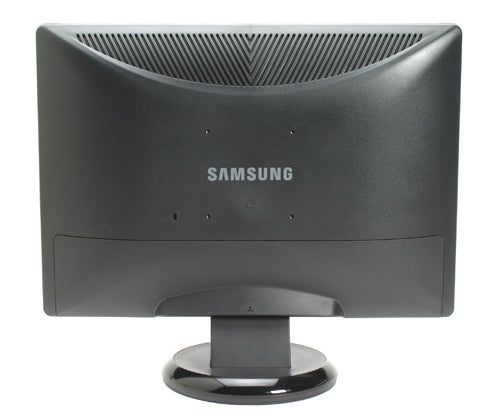 The figure imprinted at the top right is a claimed Contrast Ratio of 3000: 1 but only when the Dynamic Contrast preset is selected. This setting actually automatically brightens or dims the monitor depending on the content, which sounds great. However, I would recommend avoiding this setting. This boosts colours at the top end, but it merely makes for overblown images, which aren’t great to look at.


If a display is too bright it makes prolonged viewing more stressful so the Text or Internet settings turned down the brightness level so you can sit in front of the display for longer periods. If you’re gaming or watching a movie then the Sport or Movie settings are preferable. In the other modes you’ll be getting a contrast ratio of 1000:1 which isn’t bad for a desktop LCD monitor.

Indeed, when watching both standard definition and high definition content I was impressed by the detail and contrast on offer particularly in darker scenes with good motion. The screen also isn’t as overly reflective as some displays are.


The native resolution of 1,680 x 1,050 is just shy of full HD in terms of vertical resolution, so it’ll have to scale down for Full HD and scale up for 720p content, but the screen dealt well with both.


The Magic Color option I mentioned earlier does what it says on the tin but like Dynamic Contrast it washes out the high end so you lose subtle colour graduations. It makes Windows more vivid but I would make sure it’s turned off when photo editing.

For gaming I fired up a favourite game – Trackmania Nations. It only really gets to come out for monitor testing but it’s fun, with plenty of motion and lots of colour, though mainly green. It looked great with the smooth images and good colour and high native resolution making for a great experience. To see how a twitch game would fare I used Counter-Strike: Source, and that too was fine.


Some displays tend to struggle with shadow areas but the contrast ratio and the adjustable gamma curve option on this monitor means that you won’t have a problem, whatever the ambient light conditions. 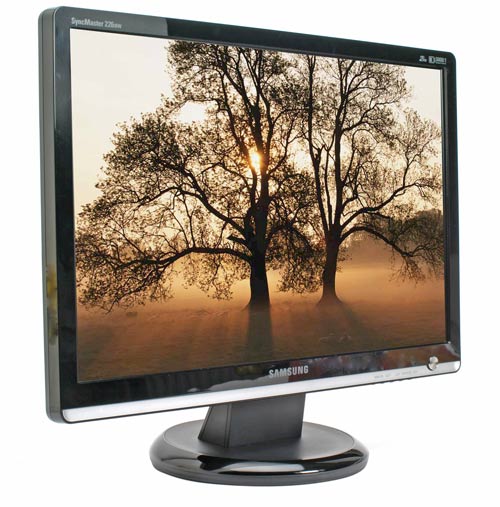 In our DisplayMate test, the 226BW put in a very good performance; so long as the extreme Dynamic Contrast mode wasn’t used. Colours were vivid without being overdone and colour fading was excellent. There was a hint of banding in the 256 Intensity Level Colour Ramp test but it was only really evident with the Dynamic Contrast mode.


Suffice to say then that with the looks, features and performance, the Samsung 226BW is definitely our pick of the 22in bunch. However, as another Samsung’s display that gives it the most competition in the form of the 215TW.


This is still our benchmark for widescreen monitor quality and it also has the advantage of Component and S-video inputs, which makes it much more flexible, especially for use with consoles. Of course, you lose an inch to the 226BW and it costs more and for that matter isn’t quite as stylish, so the choice is there. In the end it’s still our favourite widescreen display but if you don’t need the extra connectivity and want the larger size then the 226BW comes recommended.


The Samsung SyncMaster 226BW combines a stylish housing, and great features such as HDCP compatibility on its DVI port, with very impressive image quality. It’s a combination that means that it wins an award and makes it the pick of the 22in bunch.