A couple of weeks ago I looked at the Samsung ST1000, an ultra-compact digital camera equipped with the touch-screen interface, built-in GPS, Bluetooth and WiFi features more usually found on a modern mobile phone. Samsung is clearly keen on this idea, because today’s camera also features mobile phone technology, with a second LCD monitor on the front of the camera. 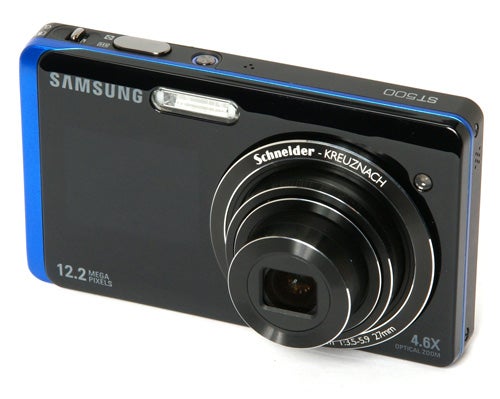 At first glance the Samsung ST500 looks like any other mid-range ultra-compact digital camera. It has a slim body measuring 99.8 x 59.8 x 19.1mm, and is fairly light, weighing just 160g including battery and memory card. The body is made of plastic, but the build quality is reasonably good. The camera is only available in black, with a metallic trim in red, blue or silver.


The back of the camera holds a three-inch wide-screen format touch-sensitive LCD panel with a resolution of 230k dots. This is smaller than the touch screen on the ST1000, and the camera comes with a small and very losable stylus to operate the rather small on-screen buttons. However at least the smaller screen leaves plenty of room on the back for a decent sized thumb grip area. 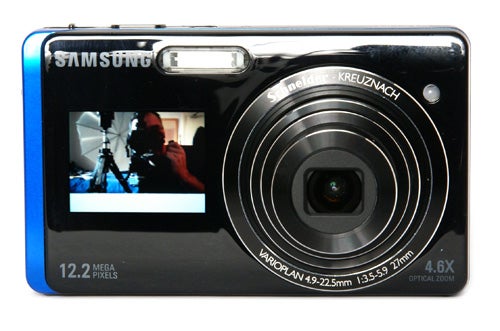 The camera’s gimmick is its second LCD monitor which is hidden beneath the transparent surface of the front panel, to the left of the lens. When not in use the display is almost invisible beneath the tinted black surface, but shines through when activated. The idea of the second display is to make it easier to frame self-portrait shots. It’s a fairly low resolution display, with only 61,000 dots, but if you’re a couple of metres away that doesn’t make much difference.

To be fair the second display does exactly what it says on the tin. It does make it easier to frame self-portraits and self-timer shots, and the clearly visible countdown in self timer mode means that everyone knows when to say “cheese”. If you frequently find yourself taking that kind of shot then there’s no question that it is a useful feature, but is it useful enough to pay extra for it? The ST500 is currently selling for around £170, which is a lot of money for what is otherwise a fairly unremarkable compact camera. 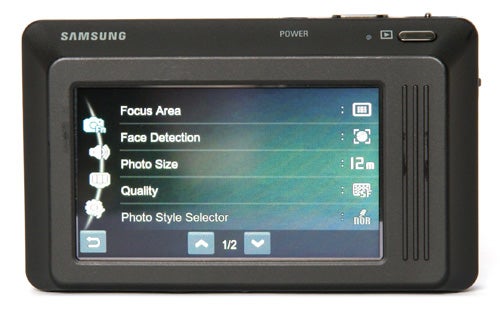 It does offer a couple of other nice features though. It has a decent 4.6x zoom Schneider Kreuznach branded lens with optical image stabilisation and a 27-124mm equivalent zoom range. It also has a good video recording mode, shooting at 1280 x 720 resolution and 30fps. The optical zoom can be used while recording, but unusually the camera mutes sound recording while the lens moves. Personally I’d rather have a bit of motor noise on the soundtrack than big silent gaps, but maybe that’s just me being odd.


The touch-screen interface on the ST500 is a prime example of why I don’t think touch-screens are a particularly good idea on cameras. On a phone, where the interface is the main purpose of the screen, they’re fine. Phones tend to have bigger screens than cameras anyway, so they can have nice big buttons that are quick and easy to use. On a camera the main purpose of the monitor is for framing shots and viewing images, which means that the touch-screen elements have to be either very small or hidden away most of the time, or in this case both. The screen of the ST500 is also pressure-sensitive rather than the finger-only capacitance-sensitive screens used on most phones. The sensing layer is slightly silvered producing nasty glare when used in sunlight. 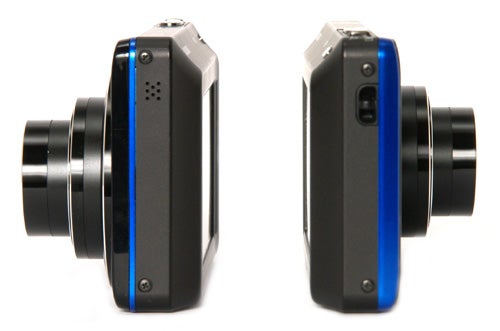 As well as the touch screen, the ST500 has an accelerometer, allowing a limited degree of “gesture” control. Oh, and it has “haptic feedback” too. The cameras buzzes slightly when you touch an on-screen button.


Other than the gimmick features of dual screen and touch interface the ST500 is a fairly average camera. It has the usual selection of program auto, full auto, “smart” auto and scene mode, with 13 scene programs. It has adjustable contrast, saturation and sharpness, but not much else in the way of creative image control.


The ST500 is the second recent Samsung camera that I’ve seen which uses MicroSD cards for storage. These are the tiny memory cards normally used in mobile phones. They are a little more expensive than regular SD cards and are a lot easier to lose. Of course they are also much easier to swallow if you’re captured by enemy agents, although off the top of my head I can’t think of any other advantages.

In terms of performance the ST500 acquits itself reasonably well, although compared to other compacts in the same price range it’s not that quick. Its start-up time of approximately two seconds isn’t too shabby, but in single-shot mode its shot-to-shot time of a little over three seconds is a bit on the slow side. In continuous shooting mode it can manage a shot every 1.3 seconds; there is an audio cue to let you know when a picture is taken, but the monitor remains blank after the first shot.

The autofocus system is also good. Options include centre-spot, nine-point multi-zone, or a touch-screen selectable focus point. Focusing is quick and accurate, and works reasonably well in low light. The ST500 has an AF assist lamp with a useful range of about two metres. The flash is a little weak though, with a useful range of less than its claimed 3.4 metres. The recharge time of around nine seconds is also quite slow.


The ST1000 has a powerful 1150mAh battery to power all its built-in gizmos, but the ST500 has only a relatively puny 720mAh cell. While testing the camera I used the flash and the front screen probably more than most users would, and I found that the battery was down to one bar after only 70 shots, but after that it went up and down like the Assyrian Empire, going from three bars to one bar and back again between shots, until it finally ran out of juice at 140 shots.


Image quality has not been a great strength of recent Samsung cameras, a trend which the ST500 unfortunately continues. Considering that it has a supposedly premium quality lens, a 12.2MP sensor and a low compression file size of around 5.8MB, the level of detail is surprisingly poor; I’ve seen 8MP cameras with better fine detail.


The lens is sharp enough in the centre of the frame and shows very little distortion at wide angle, but corner sharpness could be better. Dynamic range is also very limited, as is always the case with 12.2MP 1/2.33-inch sensors, with badly clipped highlights in all high contrast shots. The camera has an automatic contrast booster, but all it really does is brighten the image, clipping the highlights even more. 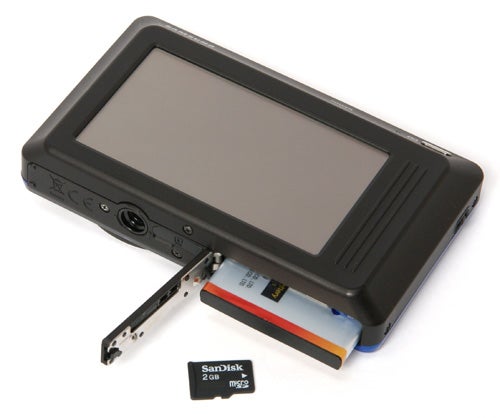 Image noise control, on the other hand, is surprisingly good. Images at 400 ISO have a little noise and colour distortion but are quite printable, and even at 800 ISO tone gradients remain fairly smooth, usable for web and email purposes.

The Samsung ST500 is a fairly typical 12MP ultra-compact, distinguished only by its touch-screen control and by its unusual front-mounted second monitor. This feature has its uses, and the camera is capable of taking good shots in most social situations, but the high price makes it poor value for money. 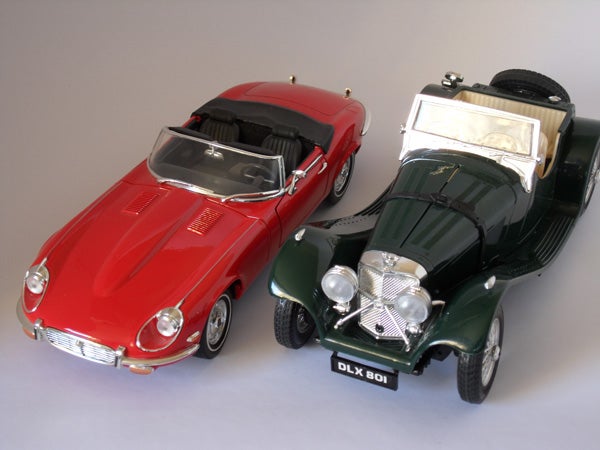 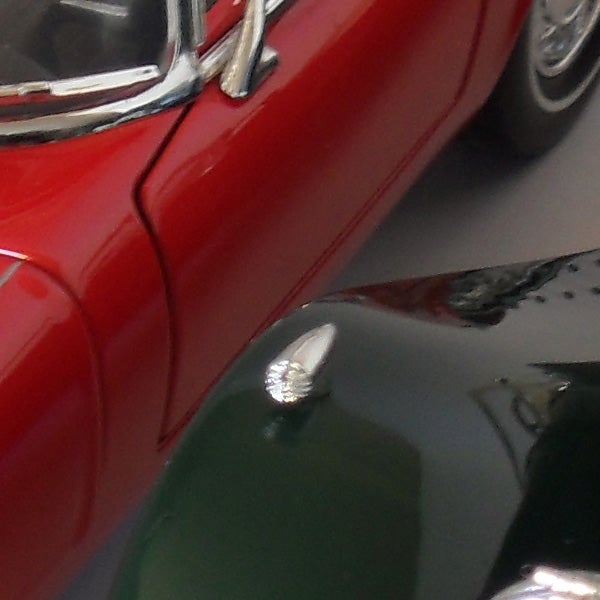 There’s a little bit of camera shake on this shot, but you can see the image quality is nice and smooth at 80 ISO. 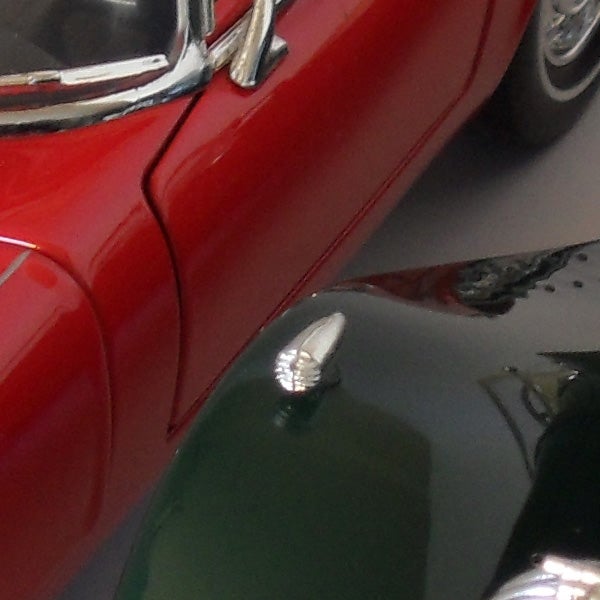 Still no noise problems at 100 ISO. 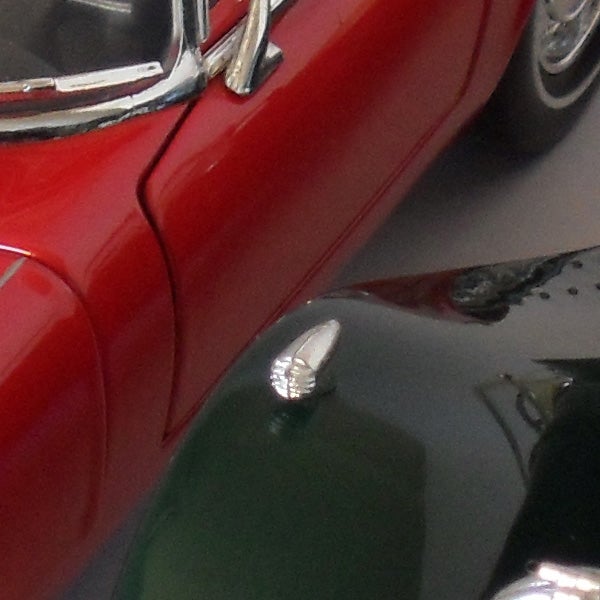 A bit of noise is starting to creep in at 200 ISO. 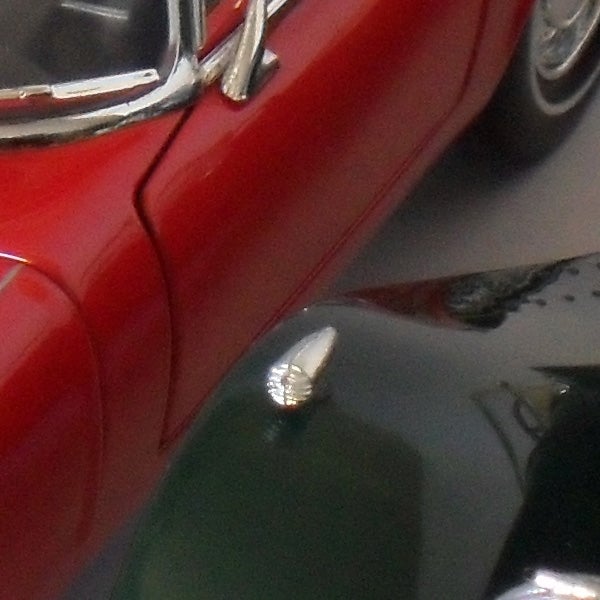 Results are still good at 400 ISO. 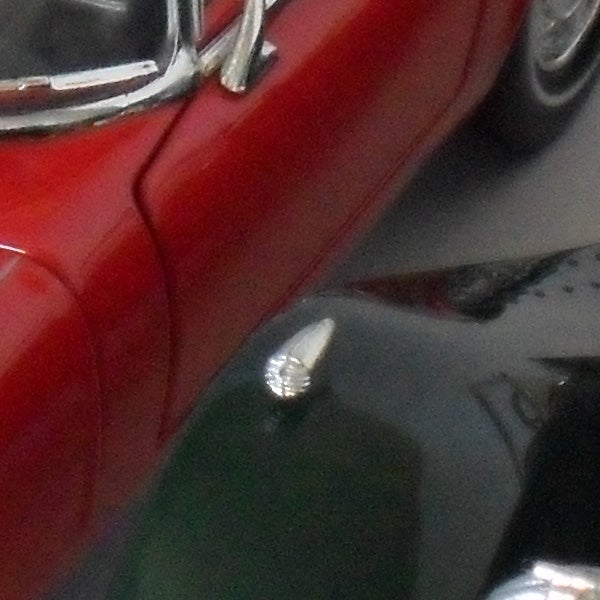 Noise and colour distortion are visible at 800 ISO, but overall quality isn’t too bad. 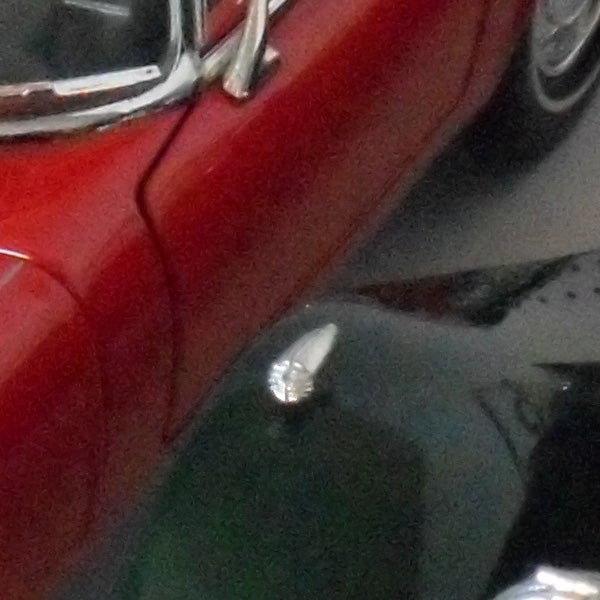 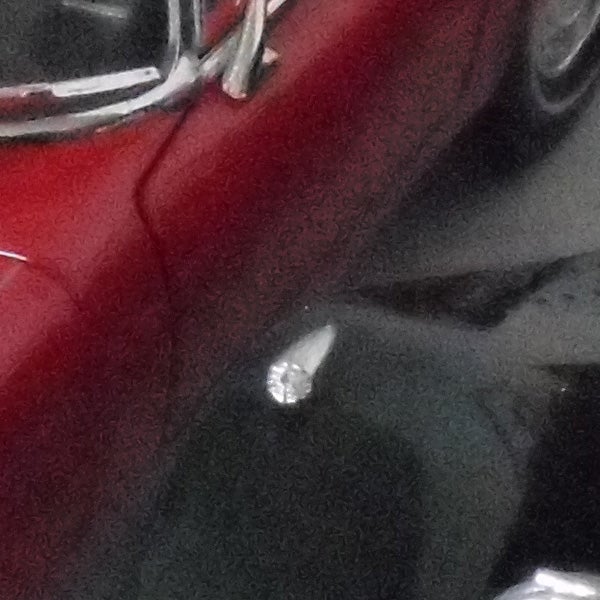 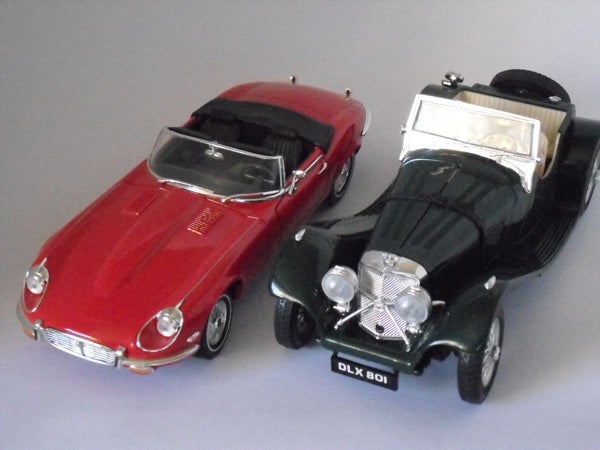 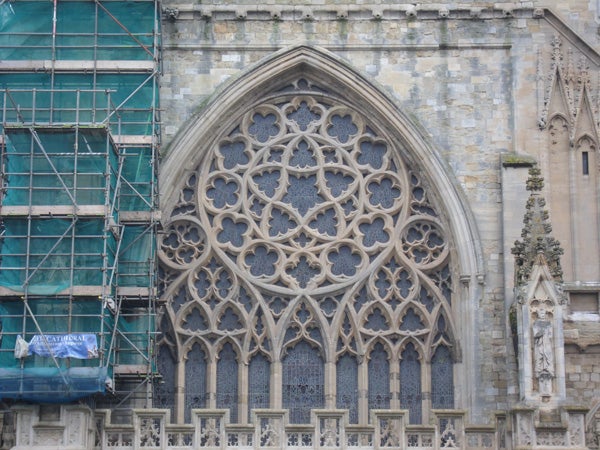 Here’s the usual detail test shot of the West Window of Exeter Cathedral, for you to compare with other cameras. See below for a full res crop, or click to see the whole picture. The downloadable file is approximately 5.8MB. 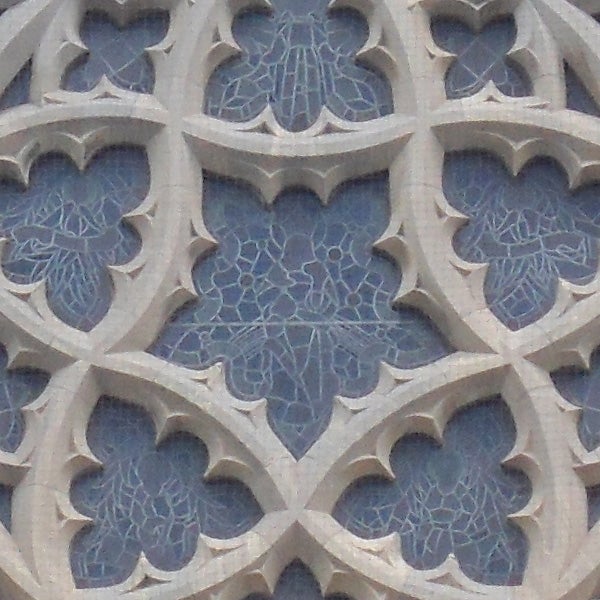 Despite the Schneider-Kreuznach lens and 12.2MP sensor, the level of recorded detail is not that good. 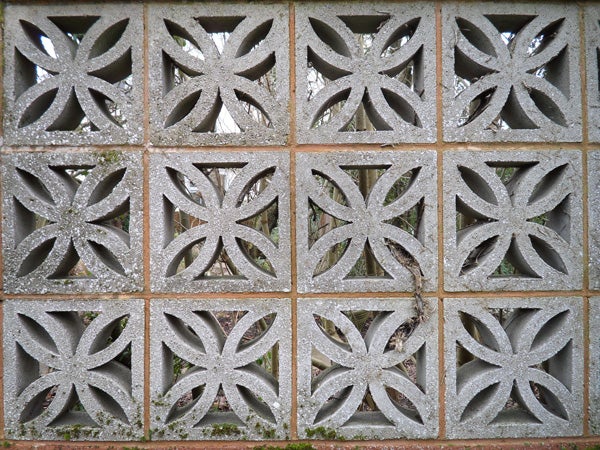 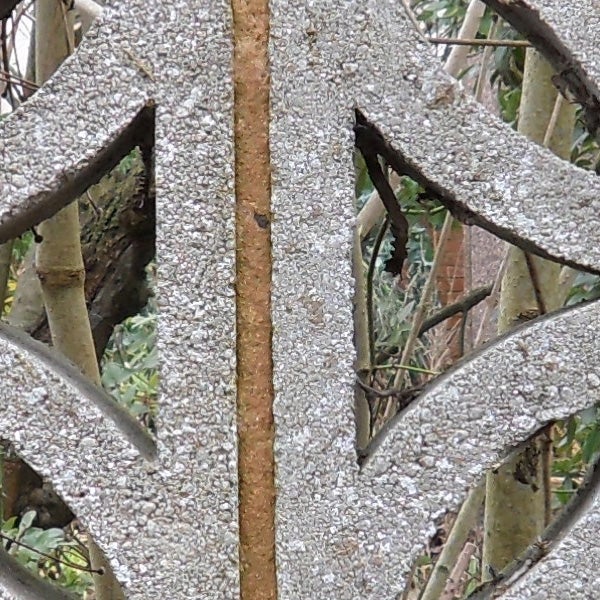 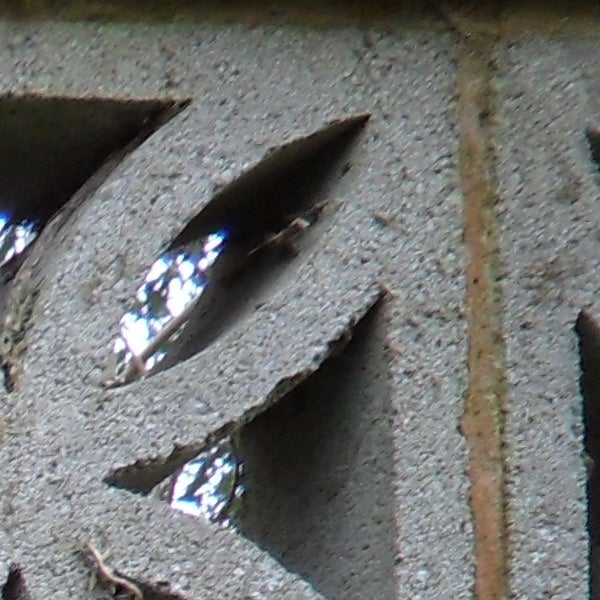 Corner sharpness could be better though. 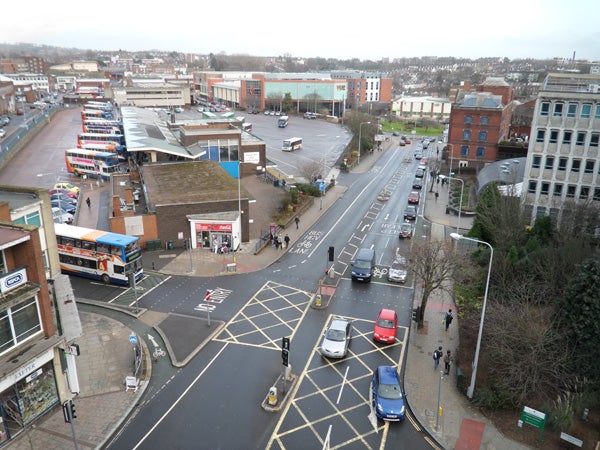 The wide angle end is equivalent to 27mm. 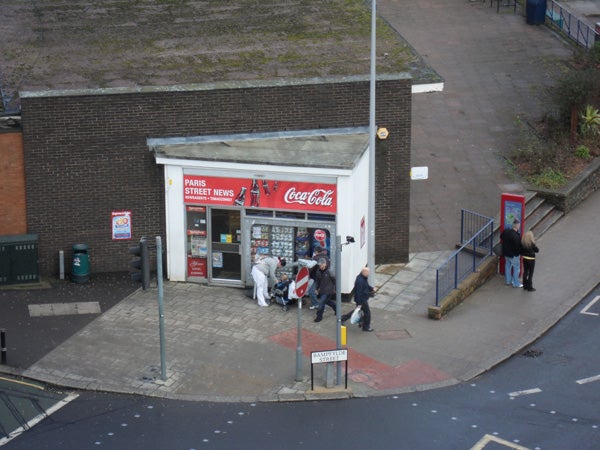 The telephoto end is equivalent to 124.2mm. 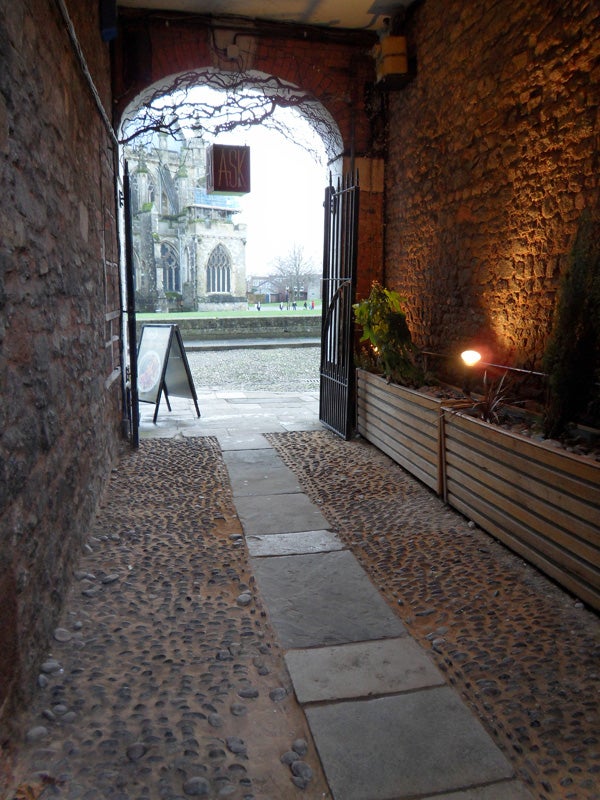 In this high-contrast shot with the Auto Contrast Booster turned on, there is good shadow detail but highlights are badly clipped.