In the current brutal war of words between the active and passive 3D camps, one of the strongest arguments put forward by passive supporters is that active shutter glasses are much more cumbersome, heavy, fiddly (because you have to recharge them) and expensive than passive ones.

Inevitably Samsung is mighty keen to try and quash this criticism of its beloved active 3D technology. So it’s become the first brand to produce a pair of ‘designer’ active shutter 3D glasses, the SSG-3700CRs, created in conjunction with Austrian design company Silhouette.


What’s more, as if paranoid that these goggles alone might not be ‘sexy’ enough, Samsung has also designed a rather stylish wireless recharging post to keep its groovy new glasses company.


This all sounds gorgeously gadgety to us. So we’ve wasted absolutely no time getting our hands on a pair of the glasses and the charging post to see if they’re as hot in the flesh as they sound on paper.

Starting with the glasses, they genuinely are a revelation in terms of weight and bulk. At just 28g they feel little if any heavier than typical passive glasses thanks to the remarkably slender head band and minimal lens frame. Even better, they still feel balanced, thanks to the careful addition of little weights at the rear end of each side of the head band.


These chunky terminations have a further practical value too, in that one of them carries both a manual power over-ride button (the glasses normally switch on and off automatically) and a USB input for people who don’t want to cough up for the wireless recharging post.

Another excellent touch is the flexibility of the head bands. You can bend, twist and contort them into all sorts of crazy shapes without them breaking or even threatening to crack, and they always spring right back into their proper shape. With this in mind they’ve got more chance of surviving you sitting on them than any other active shutter 3D glasses, though inevitably the prescription-ready lenses and the frame they’re in are both completely rigid, so we certainly wouldn’t recommend sitting on them just for yuks!

Turning to the charging post, the best way to describe its shape is as a top hat for toddlers. Only more glamorous. For with its high-gloss finish and smokey plastic ‘brim’ it manages to look oddly elegant while still oozing gadget appeal.

Obviously you need a power wire running into the charge post, but crucially you don’t need to physically attach the glasses to it by further cabling. Instead, you just pop the glasses onto the charger as if you were putting them on your head, and it will recharge them wirelessly using electromagnetic induction. Sweet.

A fully charged set of 3700CR glasses is reckoned be good for around 70 hours of continuous use. But as we discovered, if you get the recharging post the reality is that you never actually have to think about them running out of juice, as it quickly becomes habitual to pop the glasses on the post whenever you’re not using them.


The SWC1000A can handle up to four pairs of glasses simultaneously, and during our tests it always recharged the glasses we put on there with no problems. Which is pretty much all that needs to be said about it, really!


As for the glasses, they really are remarkably comfortable – easily the most comfortable active shutter models we’ve ever put on, in fact. So much so that wearing them for even hours at a time really isn’t an issue.

The way the nose grip is designed allows the 3700CR’s lenses sit up reasonably close to your eyes, meanwhile, reducing the amount of distracting ambient light that can get between the lenses and your eyes. The lenses cover more of your vision field than many rivals too, and it’s noticeable that the SSG-3700CR glasses seem to remove much less brightness from the picture than many rival active shutter glasses. 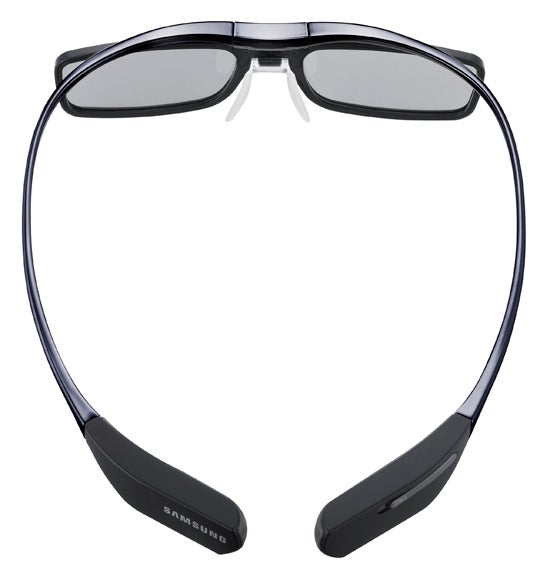 The only real issue we had with the 3700CRs is that the lens frame is a touch small, so that you become aware of the frame within your field of vision at times. The self-conscious thinness of the frame also means some ambient light can sneak into your viewing field from the left and right sides. But this latter issue is pretty easily solved by just making your room as dark as possible.


We guess we should add that some people might be affected by a flickering effect while using the SSG-3700CRs, caused by their active shutter technology. But our experience is that this only seems to affect a small portion of users to any serious degree, and in any case it’s no certainly no worse and is arguably better on the 3700CR glasses than it is on other, less ‘trendy’ active 3D glasses.

The SSG-3700CRs succeed startlingly well in making it clear that active shutter glasses can be pretty much as lightweight, comfortable and ‘cool’ as passive ones. In fact, their already high cool factor goes off the scale when they’re used in conjunction with Samsung’s genuinely ingenious SWC1000A wireless charger.


Samsung’s hip new 3700CRs, then, definitely get round some, even many of the usual glasses-based objections raised by active 3D bashers. One problem remains, however: they still cost at best £99 each, representing a significant extra investment for anyone with a family of four or more – especially if you also factor in the irresistible wireless charger.


In other words, while the SSG-3700CR glasses and SWC1000A charger are well conceived, superbly constructed, highly functional and a great salvo in this year’s bitter 3D fight, their price prevents them from delivering a knockout punch.