For some reason, Samsung has never got truly serious about the home projection market. Sure, we get the occasional model that promises much but seemingly always ends up strangely out of date once we get our hands on it. But it’s very much a ‘side venture’ for the Korean giant.


That’s not to say, though, that Samsung isn’t serious about projectors full stop. For in fact, it’s increasingly active in the business projector sector, where it’s made great waves, in particular, with its pretty handy ‘Pico’ (as in, pocket-sized) SP-P400B LED projector. 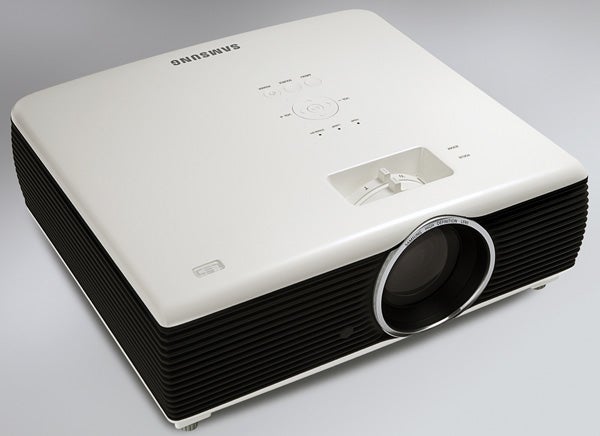 Indeed, it’s tempting to see the success of the P400B as the inspiration for the SP-F10M we’re looking at today. For while the F10M certain isn’t nearly as small as the P400B, it does use LED lighting – and to rather groundbreaking effect, as it’s the first LED-driven data projector to claim a 1,000 ANSI lumens light output.


This really is a significant development in a projector world where previous cheap, business LED projectors have struggled to get above the dim and dingy 200 lumens output level. After all, it finally makes LED a potential direct competitor with LCD and DLP in the mass business projector market, and even more excitingly from a film-loving point of view, it raises the possibility of LED projectors also entering the affordable home cinema projector market at some point soon.

Despite being much larger than the cutesy P400B, the F10M is reasonably pretty with its white glossy top cover, and is actually a standard size for the data projection market. In other words, its exterior gives no real hint at the innovative innards inside. Unless, that is, the grilled side panels turn out to be necessary for venting more heat than might be expected from a typical sub-£1k data projector.


The F10M’s connections are promisingly flexible. There’s an HDMI, for starters, which can be used for video (including HD, of course) or PC playback. This sits alongside a D-Sub PC loopthrough, an RS-232 control port, a composite video input, an S-Video input, a USB port, and a LAN socket for limited network functionality.


There’s even a stereo audio input, there because, as with many data projectors, the F10M has a small (7W) built-in sound system. This audio is actually more powerful than most – as it needs to be to combat the distracting racket pumped out by the F10M’s clearly hard-working cooling fans if you’re running it in its brightest output mode! However, the sound certainly won’t be sufficient to serve any home cinema purposes.

Getting back to the F10M’s LED lamp system, its key draw has to be the bulb’s massive life span. Samsung is happy to predict a 30,000-hour life for the LED bulb if you stick with the projector’s lower-brightness Eco setting, potentially meaning you’ll never have to replace the bulb even once during the product’s realistic lifetime. What’s more, the F10M’s LED bulb won’t lose anywhere near as much brightness over its vast lifespan as normal halogen bulbs do over their relative short lives.


Add to this the fact that the projector can be unplugged the moment you’ve switched it off, rather than having to wait for the bulb to cool down as happens with most LCD and DLP projectors, and you’ve got a projector that offers potentially great convenience and cost-saving appeal. The F10M even runs slightly more economically than LCD projectors, with a typical power consumption of 270W and standby power consumer of less than 1W.

Promisingly, the F10M claims a contrast ratio of 2,000:1, which is high for a budget data projector, raising hopes that the projector’s high brightness output won’t come at the expense of a respectable presentation of dark picture information.


Anyone hankering after a projector to do dual movie and business duties, though, will be disappointed to find the F10M’s native resolution coming in a 1,024 x 768 pixels, since this is a 4:3-ratio configuration rather than a widescreen configuration. So if you watch widescreen stuff on it, you’ll only be using a portion of the projector’s available pixels. 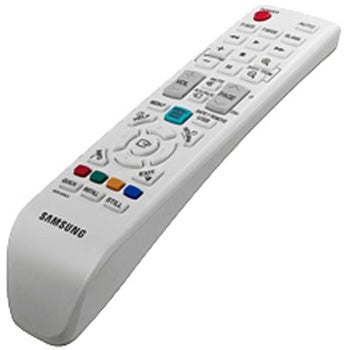 Setting the F10M up is straightforward. There are simple but reasonably ‘tight’ focus and zoom rings round the lens, while a couple of drop down legs under the projector’s front help you angle the picture up correctly onto your screen. Sadly, there’s no optical shift, meaning you essentially have to distort the picture with keystone correction to get the image’s edges straight. But this is par for the course in this section of the projection market, and at least there’s a reasonably effective auto keystone facility to make your life easier.


Features of note within the F10M’s onscreen menus, meanwhile, include a digital NR option, the facility to deactivate overscanning, the option to turn on or off a dynamic contrast system, and even a film mode that proves Samsung doesn’t necessarily solely have business-world hopes for the F10M.


It is business users, though, who will most appreciate the F10M’s multimedia facilities. These include the ability to play movies, music, photos and even documents (including Word, PowerPoint and Excel files) from either a USB drive or the projector’s own built-in memory. This internal memory only stretches to 60MB, but it’s still great to find a projector that can unchain you from your laptop when you want to do a presentation.

The first thing we noticed about the F10M’s performance was indeed its brightness. For its 1,000 lumens output actually looks rather brighter than the outputs from many similarly specified halogen LCD/DLP models. The brightest parts of the picture really leap out, even on a neutral gain screen more regularly used for testing dedicated home cinema projectors.


This is about as far as it’s possible to get from the washed out, drab pictures associated with the majority of the affordable LED market to date.


We should clarify here that the sort of punchiness we’ve just been talking about only really applies if you leave the F10M in its high brightness mode; nudging things down to the Eco output definitely reduces overall brightness quite a bit. However, if you want to watch any video on the F10M, we’d actually recommend that you use the Eco mode, despite the loss of brightness it incurs.

There are three main reasons we say this. First and most importantly, the F10M’s colours look massively more natural for video with the bulb set to Eco output than High. In High, many tones – especially rich reds and greens – appear as if they’re being pushed far too aggressively, producing a picture that looks unnatural and unbalanced. Though it should be said that even in Eco mode the colour tones remain clearly data- rather than video-biased.


It is, of course, a shame when using the Eco mode not to be getting the maximum use out of the F10M’s high brightness ‘killer app’. Especially as the projector’s Eco brightness level brings it more in line with rival LCD projectors – even some slightly cheaper ones. But it’s important to stress that the image still looks punchy, and it’s comforting to know that the Bright mode exists if you want to give added visual drama to PC presentations – especially if you’re having to contend with ambient light.


It does no harm to the F10M’s sense of dynamism that its general black level response is slightly above average for such an affordable, data-led projector. Sure, there’s much more greyness and much less shadow detail around during dark scenes than we’d expect from a projector designed with home cinema in mind, but there’s not the complete ‘grey out’ of blacks so often seen with budget LCD projectors.


Wrapping up the eminently respectable performance detailed so far are a striking lack of visible pixel structure when watching the F10M on a 100in screen; clean motion reproduction; and a dearth of technology-related video noise.


While it’s hard to rave about the F10M, it’s also pretty hard to seriously fault it. For basically, aside from some rather hit and miss colour tones, it produces data LCD-like performance levels for only a small cost premium while delivering all the usual LED benefits – including, most notably, that ‘one bulb for life’ boast. All of which means it’s surely only a matter of time before we start to see LED lighting having a go at the affordable home cinema market too.