Samsung’s camcorders have been increasingly impressive over the last couple of years, with the VP-HMX20 showcasing the company’s new-found abilities. More recently, Samsung has been returning more to its budget-conscious roots, with models such as the HMX-H104 again balancing quality against a keen price. The SMX-C10 takes things back further towards value, costing less than £150 from some vendors.

So the price is unimposing, and so is the C10’s size. It’s about the length and height of a small mobile phone, and only around twice as thick. It’s also beautifully designed, with attractively rounded ends and a stylishly slanted lens. There’s a zoom rocker on the top and record button on the back, so you can use the C10 in traditional Handycam posture, although this is a little uncomfortable unless you have hands the size of a child’s. Samsung has taken the slightly odd decision of angling the lens upwards, which takes a little getting used to but does make Handycam-style shooting easier on your wrist.

Samsung has also made the sensible decision of situating additional controls on the edge of the flip-out LCD. This allows you to operate the C10 with two hands at waist height, which is far more comfortable than the usual orientation. Here again the angled lens further aids posture, once you’re used to idea that the camcorder body should be pointing below what you will actually see onscreen. 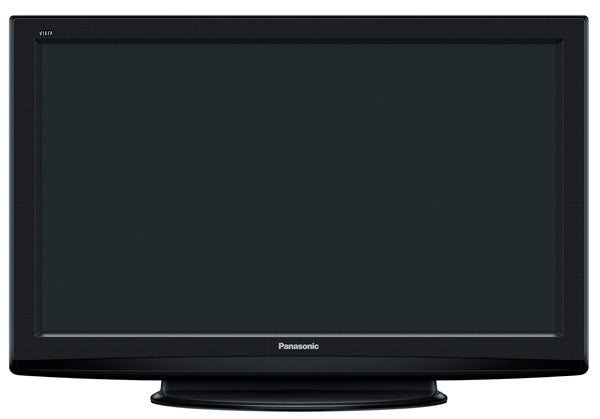 The C10 records standard definition footage to SD memory. Five different quality settings are available. The three TV modes record video in the regular PAL format of 720 x 576 pixels at 25fps, whilst the two Web modes use a more online-friendly 640 x 480 pixels resolution, although the frame rate is still 25fps. At the top TV Superfine setting, which operates at approximately 6Mb/s, you can fit 23 minutes of footage per GB of storage. In all modes, the C10 employs H.264 compression, producing MP4 files, which we found widely compatible with current editing software.

With its tiny size and low price, the C10 is clearly not aimed at video-making enthusiasts. It’s too small to integrate an accessory shoe, and there isn’t much room for microphone or headphone jacks, which unsurprisingly are therefore not present. The only connections are mini-USB and a minijack for composite video and RCA audio output. However, Samsung has still included a reasonable array of manual controls. Easy access is provided to the most frequently used functions via the joystick on the LCD edge. Simply press this down to call up the options.

A basic exposure control with 12 steps is available, but there’s no independent adjustment of shutter or iris. You can toggle between autofocus, face detection, and manual focusing. As with the exposure control, manual focusing uses the joystick for configuration, so is quite fiddly. The scene modes are also accessible via the joystick, covering the usual suspects such as sports, portrait, beach and snow, plus a few oddities like food and waterfalls. However, Samsung also includes its white balance presets in the same list, so you can’t use these at the same time as scene modes, which is slightly frustrating.


Also frustrating is that backlight compensation can only be accessed via the main menu. Aside from including this and all the functions discussed above, the menu includes 10 digital effects, a wind-cut microphone option, and a time lapse facility. The latter lets you capture frames at intervals ranging from one a second to one every 30 seconds, for a duration of 24, 48, or 72 hours, or until storage runs out. Naturally, you will need to hook up the mains adapter for this, although Samsung also boasts a 160-minute battery life for the C10, which we found fairly accurate. 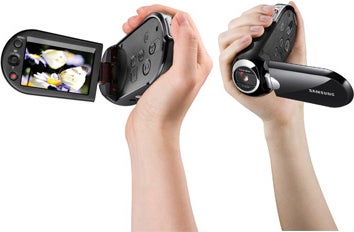 It should also be noted that the C10 has a true 10x optical zoom, something which the cheapest camcorders and pocket Internet models almost always lack. The digital zoom boosts this to a ludicrous 1,200x, but as usual definition will disappear completely when you use this so it’s best disabled.

The C10 relies on a small 1/6in CCD sensor with 680K pixels, which is usually a recipe for mediocre video performance. Nevertheless, image quality is perfectly acceptable in good lighting, with reasonably faithful colour, albeit nowhere near as saturated as with many camcorder brands, particularly Sony. 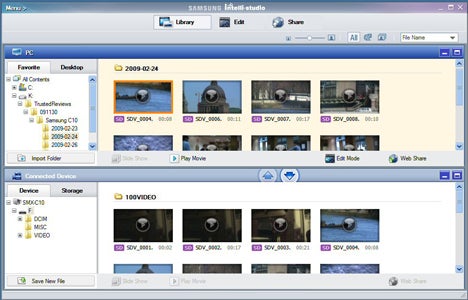 In adequate artificial lighting, the C10 still achieves reasonable results. However, the C10 produced a dark, almost featureless image in our gruelling ‘100W ceiling light’ test. Turning on the Darkness scene mode did improve things to a tolerable level, but this drops the frame rate so produces a brighter image at the expense of jerky motion. Pocket Internet camcorders with larger 1/4in sensors produce better results in these conditions. For example, both Creative’s Vado HD and the Flip Video UltraHD will pick up much more acceptable images in low light.


Nevertheless, the C10 is clearly targeting the burgeoning pocket Internet camcorder market, as it includes its Intelli-Studio software on the device itself. The first time you hook the camcorder up to your PC, the app will be installed, and even updated to the latest version. You can then perform simple trimming and add effects to your clips, plus overlay titles and sound. You can also line up a storyboard of clips with transitions in between, although there are no layering abilities. 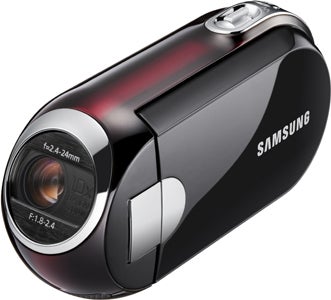 However, the primary function is uploading videos to the Internet. Options include YouTube and Flickr, plus sending your videos via email. There’s even a button on the side of the C10 itself allowing direct YouTube upload via an attached PC’s Internet connection, although you have to mark the files for sharing on the camcorder for this to work. The Intelli-Studio software also only runs on Windows PCs, not Macs.


The Samsung SMX-C10’s sub-£150 price pits it directly against pocket Internet camcorders, which have now moved up to 720p HD. So its lower video resolution may seem a little backward. However, the C10’s optical zoom, removable memory and greater control give it much more flexibility, despite the inferior low light performance compared to the best pocket Internet models. So if you want a cheap holiday camcorder, the SMX-C10 is a very good deal indeed.