Mobile phones have become fashion icons, there’s no doubt about that. No longer is your phone simply a communication tool, now it’s as important as the suit on your back or the watch on your wrist. After all, there’s no point strapping the latest Tag Heuer to your arm and then pulling out a three year old, brick like mobile – that’s definitely not creating the right image now is it.


Mobile phone manufacturers have made the most of this somewhat sad social evolution, by creating smaller, sleeker and more stylish phones that appeal to our vanity. Can you remember the very first Motorola StarTac? It cost £1,400 and it wasn’t even that small. But despite the exorbitant price, fashion victims rushed out in droves to purchase the StarTac, behaviour that we saw repeated last year with Nokia’s 8800. 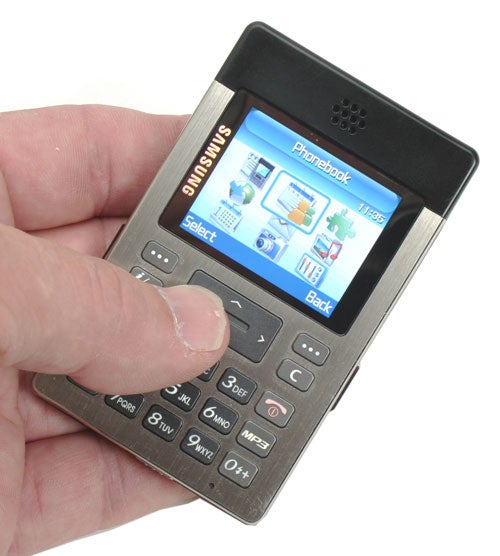 But even if you can’t afford to spend silly money on a phone, manufacturers still want you to use their particular hardware, and will do their best to make their particular handset look more sleek and stylish than the competition. Motorola tried this with the PEBL and now Samsung is trying to make waves with its new SGH-P300.


There’s no denying that the P300 is very slim and light, but I’m not sure I agree with Samsung’s website which states “At only 9mm, it is as thin as a credit card”. I don’t know about you, but I don’t have any credit cards that are 9mm thick – if I did I’d have a hell of a time fitting my wallet in my pocket. Perhaps what Samsung meant was that the P300 is the same height and width as a credit card – exactly the same in fact.

The P300 definitely feels well made – the front fascia and rear battery panel are brushed steel, while the plastics employed feel equally robust. It has the “cold to the touch” quality feel, that no doubt helped sales of the Nokia 8800 as well. But unlike Nokia’s steel encased fashion icon, and Samsungs own superb D600, the P300 isn’t comfortable to hold. You see, quoting the same dimensions as a credit card may sound good on paper, and may even have been good in practice when the Motorola StarTac was around, but by today’s standards the width of a credit card is actually quite large for a mobile phone. Also, the angular design of the phone means that it’s hard to hold it against your head for an extended period of time.

The actual dimensions of the P300 are 88 x 55 x 9mm (HxWxD), while it weighs in at a waif like 81g. Strangely it doesn’t feel that light in your hand, or in fact in your pocket. That said, the P300 spent most of its time encased in the supplied leather wallet. The wallet does add some size and weight, but it does improve the aesthetics of the phone. More importantly though, the leather wallet is also an extended battery. With the P300 snugly secured in the battery wallet the battery life is truly superb – I managed to get almost 10 days on a single charge, including almost two hours of talk time. 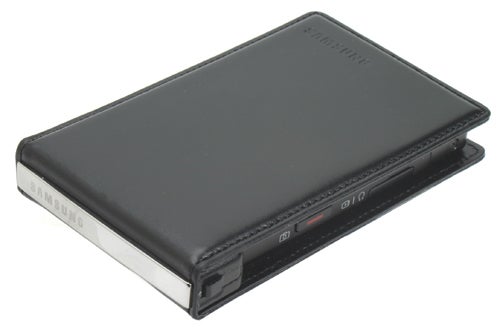 When it comes to design, I can’t help but think that the P300 looks like a pocket calculator – an opinion that was shared by many people who saw it. But it’s the button layout that’s the real issue. The number pad only has three rows as opposed to the more traditional four (not counting soft keys and navigation buttons), but to make up for this Samsung has squeezed five buttons per row as opposed to the usual three. As a result the 0 button isn’t at the bottom where it should be, instead it’s to the right of the 9 button. This makes dialling numbers a little confusing at first, while writing text messages can be downright annoying if you’re using T9. Add to this the fact that the hash button is now next to the 7 button and the star button is next to the 4 button, and you’ll soon realise that using this phone intuitively is going to take some time. The OK button has also been moved – usually this is located at the centre of the four-way navigation pad, but now it’s next to the pad, again making things far less intuitive than they should be. 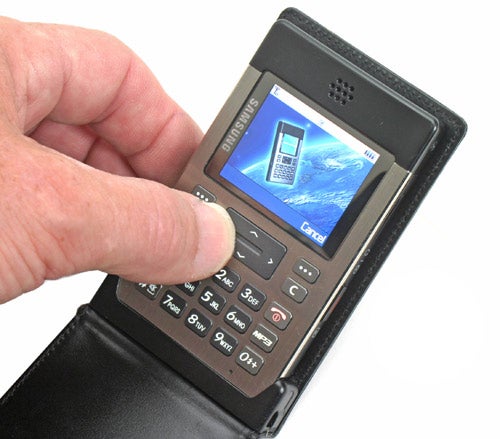 There’s a dedicated MP3 button that launches the media player, which is a little bizarre considering that there’s no memory card slot in the P300. There is a generous 80MB of internal memory, but that’s nowhere near enough to make the P300 a viable music playback device. Also, there’s no standard headphone jack, meaning that you can only use the supplied handsfree set, which doesn’t offer the best in audio quality. One way around this would have been to have a headphone jack on the microphone section of the handsfree set, but Samsung has missed this opportunity.


There’s a 1.3-megapixel camera built-in to the P300, which is again a little disappointing compared to the 2-megapixel camera seen in the D600. The results from the camera were variable, and definitely no match for my D600, even though that phone is almost a year old now. The P300 is also only Tri-band compared to the D600 which supports quad-band GSM. 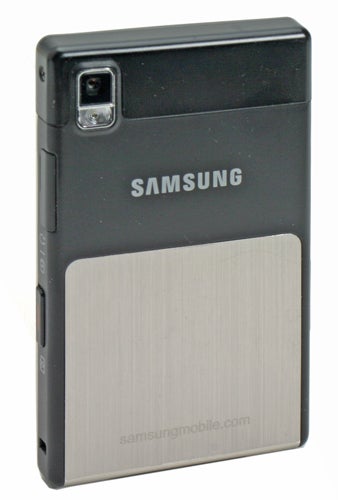 Unlike most phones, the screen in the P300 is positioned in a landscape aspect ratio, rather than the more traditional portrait mode. The 1.8in screen has a resolution of only 220 x 176, compared to the pin sharp 240 x 320 screen in the D600.


The speaker in the P300 is not as loud as other phones, and I often found myself missing calls because I couldn’t hear the phone ringing, even with the ring volume set to top. As already mentioned, the P300 will happily playback MP3 files, so you can assign pretty much anything as your ring tone to add a bit of individuality, just don’t expect to hear it when someone calls you. 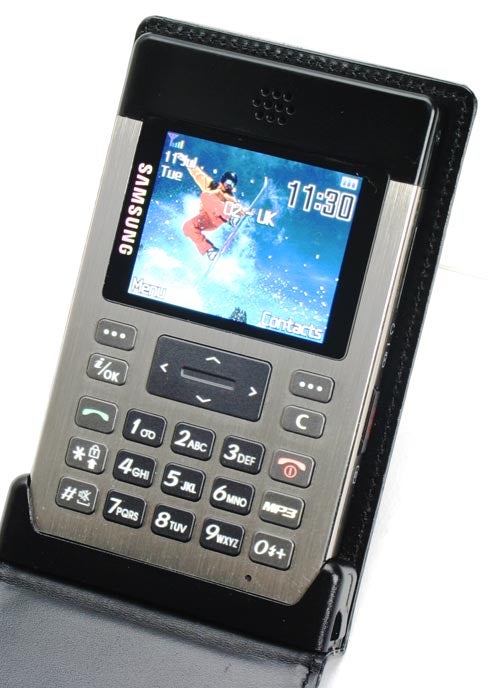 The comparisons with the D600 make it clear that the P300 is actually based on the older D500 platform, making the phone inside the shiny metal case almost two years old already. That said, the original D500 is still a more comfortable phone to use, and the call quality is also far superior. To be fair, I doubt that the call quality on the P300 is actually worse than the D500, but it’s just not as easy to hold the P300 to your ear, resulting in compromised sound quality.


Price wise, the P300 can be picked up for nothing on a £30 per month O2 Anytime 400 contract, if you sign up for 18 months. That’s pretty standard these days, although it is good to see that Samsung hasn’t expected customers to pay through the nose for a stylish phone with basic features the way Nokia did with the 8800. But even so, there are far better phones available right now, including the ageing Samsung D600, that are more worthy of your consideration. 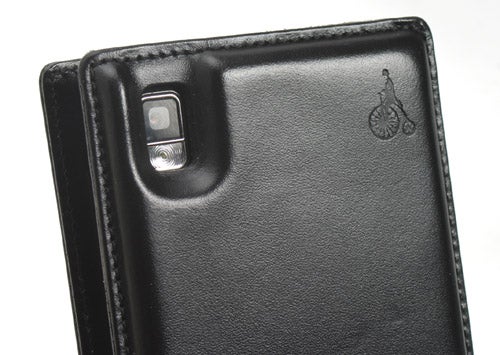 
There’s no denying that the Samsung SGH-P300 is slim and stylish in a retro pocket calculator way, but what you’ve really got here is an old Samsung D500 in a party dress. The handset is also a bit too wide to sit comfortably in your hand, while pressing it to your ear when making a call is also a little awkward. But it’s the keypad layout that really ruins this handset, making simple things like dialling a number more difficult than it should be.


Of course if you’re just looking for a slim, light and very different handset, the P300 might appeal. Add to that the fact that with the leather wallet, the battery life is truly excellent and this phone starts to make a small case for itself. For me though, that’s not enough to consider the P300 over other options.