Samsung’s Ultra range of handsets has really caught our imagination here at TrustedReviews. Riyad has already cast a favourable eye over the D900 review and we have the D830 and X820 in our sights too.


The i320 has everything going for it in the looks department. Where other Windows Mobile smartphones tend to the standard candybar format, this handset is wide – so as to incorporate a miniature keyboard, and is very, very thin. We are taking 111mm tall, 50mm wide and a mere 11.5mm thick. The weight, at 95g is no bother for the pocket.


Normally I leave battery life analysis to the end of a review, but in this case the very thinness of this handset means that there is only room for a small cell which makes battery life a very important consideration, so let’s cover it early on.


My standard music rundown test, playing MP3s from a memory card and forcing the screen to stay on, got me a minute short of five hours of battery life, which is pretty poor for a Windows Mobile Smartphone – or any handset, come to that.


To its credit, the low battery warning came an hour before the battery gave up completely, offering a fair amount of time for you find mains power.


But you probably won’t have to do that, as Samsung provides a spare battery, and better than this, has actually bothered to give you a way to charge it without needing to put it into the SGH-i320. You get a small black container into which you put the battery. This has a slot for Samsung’s mains power adaptor. Plug it in and the adaptor’s red light turns green when the battery is charged. 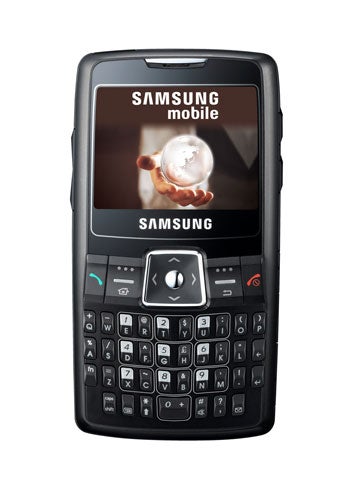 This is a neat solution, but it just makes me wonder why Samsung insists on a proprietary mains power charger rather than going USB. The same goes for its PC cable, which of course uses the same jack as the mains power cable.


Very unusually for a Windows Mobile Smartphone there is a widescreen format to the SGH-i320 so that the 320 x 240 pixels are flipped onto their side. The screen is up to Samsung’s usual high standards when it comes to sharpness and clarity, and the widescreen suits Windows Mobile Smartphone very well, allowing for a better rendering of information such as emails and calendar contents than the more usual portrait format screen does.


Under the screen the navigation button is large and very easy to manipulate. The same can be said for the rockers to its left and right which cater for Home, Back and the Windows Mobile Smartphone softmenus. To the outside of these rockers, slightly thinner Call and End keys, the latter doubling as the power key, are still large enough to find easily.


Beneath all this lies the keyboard. Its keys are tall, thin and very small. A predictive text entry system offers word suggestions, and this speeds up data entry a little, but still I found getting sentences into the SGH-i320 a rather laborious process. I think the bevelling of the keys doesn’t help here – they are raised in the middle which seemed to make me think I needed to hit just the bottom half to get a QWERTY character when in fact pushing anywhere would do it. The long and short of things is that this isn’t the fastest mini keyboard around, but it does work.


There is a good range of buttons around the thin edges of the hardware. On the left edge is a volume rocker, the infra red port is on the top. On the right edge the proprietary headset connector and mains power ports have small covers that require a fingernail to dislodge. This edge also house two buttons. The upper one launches the profile switcher on a short press and activates keylocking on a long press while the lower one can launch two applications of your choice – one on a short press, one on a long press.

This last in particular is all about being user friendly, and I have to say I like it. I am also happy to see the software tweaks Samsung has added to the standard Windows Mobile fare.


Among these is a pair of alternative Today screens. On one of these a complex information and shortcuts panel can be maximised to replace the usual Windows Mobile Today screen, while on the other you scroll through single line information bars.


In both cases you get access to incoming message notifications, applications, file viewing, a view of upcoming appointments, missed calls and the Windows Media Player. With the single bar option, the remainder of the screen can be devoted exclusively to a wallpaper, with is a rather more pleasant on the eye system than the Windows Mobile Smartphone default – though you can have that too if you prefer.


Samsung adds applications to the Windows Mobile Smartphone standards too. For example a group called Organiser contains not only Microsoft’s Calendar, Tasks and Voice Notes, but also an alarm application and one called D-Day. This lists dates by category and tells you how many days away they are. It won’t pick up dates from the Windows Mobile Smartphone calendar but does cater for recurring events and could be useful.


There is also a unit converter, stopwatch, voice control software, and the Picsel viewer for Word documents, Excel spreadsheets, PowerPoint files PDFs and some image formats. 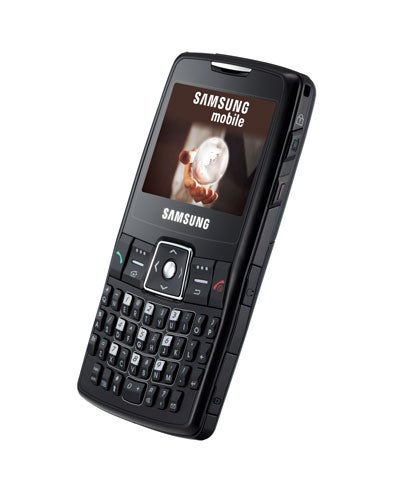 There was 109MB of free storage memory on my review SGH-i320 which came SIM free from Expansys. If you get yours through an operator you may find its software consumes some of this, but there should still be a healthy amount available. You can expand on this using microSD cards. Hotswapping cards is out of the question as you have to remove the battery to get to them.


Windows Media Player and all that available memory in theory makes the SGH-i320 a viable portable music player. But Samsung’s headset is a horrid in-ear type that simply won’t stay in my ears. That pretty much meant music listening was a no-no.


Had it been possible, I’d have been irritated by the sound quality controls. The SGH-i320 incorporates the SRS WOW system, which caters for various equaliser settings and quality enhancements, but you can’t access these while music is playing. Instead you have to set it up before running Windows Media Player. This means you can’t fiddle with equaliser settings while listening to music, which is simply irritating.


The 1.3 megapixel camera is something of a letdown in terms of megapixels, and I wouldn’t suggest you use the miniature flash unit unless you are absolutely desperate.


Indoors without the flash shots are reasonable as the sample image of the coloured dish shows. Outdoors on an overcast autumn day colours were quite vibrant but of variable quality. The purple, yellow and white of the single flower are well reproduced but the camera seemed quite keen on turning the vibrant crimson in the multi flower shot into a rather more pinky hue. Both the flower shots were taken at quite close quarters – around 30cm from the subject.


The SGH-i320 is a triumph in some respects. The wide screen does Windows Mobile Smarpthone a real favour, much of the additional software is useful, and the second battery system is handy. But the keyboard is something of a let-down.

””These are resized images so that you can evaluate the overall exposure.”” 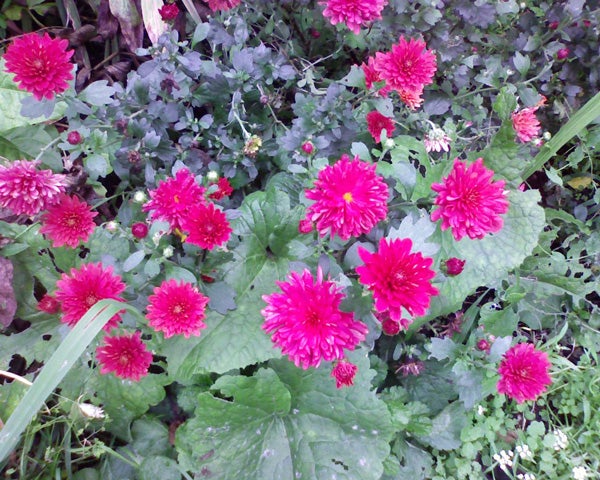 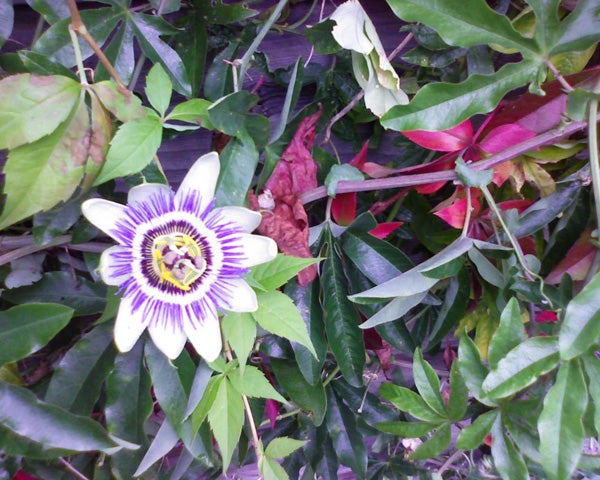 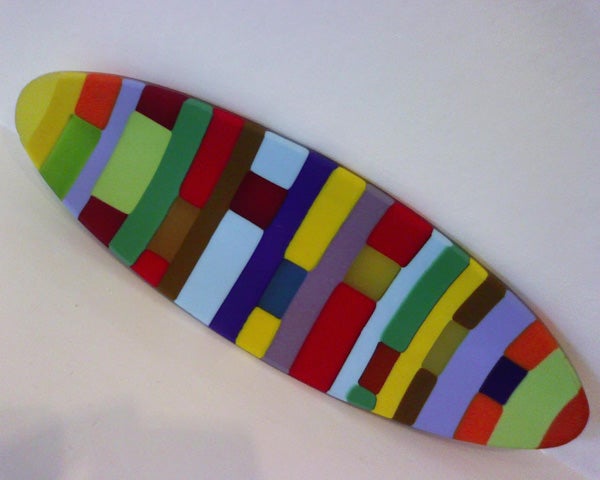 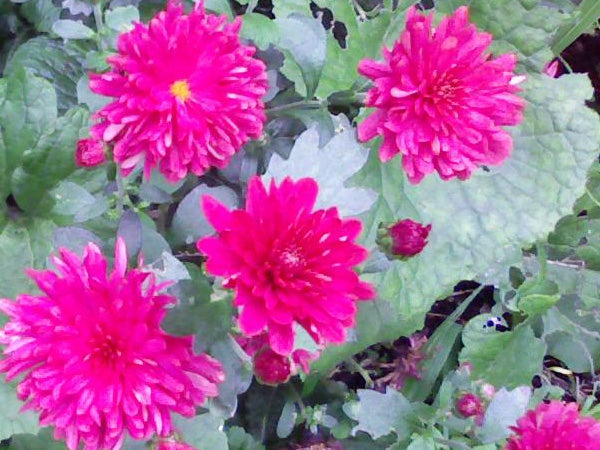