Laser-based, multifunction printers are proving increasingly popular, as they provide copying and faxing as well as print and scan. One of Samsung’s latest releases is the SCX-4824FN, which is aimed at the SOHO market and including a couple of useful extra functions.


Designed with a curved and slightly chunky appearance, this multifunction machine combines a mono laser printer with an A4 flatbed scanner, complete with a 30-sheet Automatic Document Feeder (ADF). Both the ADF feed and the output tray are near the horizontal, so the sheet feeder adds little to the overall height of the machine. 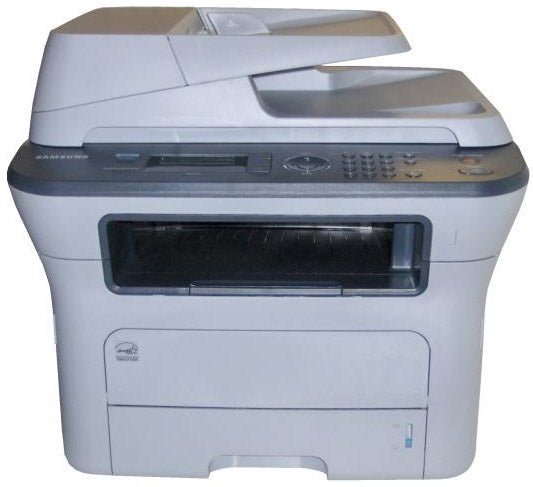 There’s quite a large gap between the top of the laser printer section and the underside of the control panel, though this does make it easier to take paper from the output tray. Although there’s a small stub extension and a flip-up paper stop, neither of these is needed under normal printing.


There’s a 250-sheet paper tray at the bottom of the machine and a rather large, flip-down cover reveals a slot for special-purpose papers, but only a single sheet at a time. A second, 250-sheet tray is available as an option, though this raises the whole machine by 80mm or so.


The control panel runs the full width of the device and includes a 2-line by 16-character, mono LCD display, a disk of menu navigation controls and a number pad for fax dialling. There are large start and stop buttons at the right-hand end of the control panel and an ID Copy button, which enables you to scan one side of an ID card, flip it over and scan the second side, before printing out both images on a single side of the paper.

Sockets at the back of the SCX-4824FN provide USB and Ethernet connections, as well as sockets for a fax line and an optional handset. There’s no provision for wireless networking, though you could use a third-party wireless print server if Wi-Fi operation is important to you.


Hardware setup is pretty straightforward, as the only consumable is a single-piece drum and toner cartridge. This slides in from the front, once you’ve hinged the front panel down. Software installation is easy, too, as there’s only a driver and Samsung’s SmarThru and Dr. Printer utilities to install. Support is provided for Windows 2000, XP and Vista, Mac OS X 10.3 and above, as well as various versions of Linux.

Samsung specifies the SCX-4824FN at 24ppm, but although it has a fair turn of speed, we couldn’t get more than around two thirds the speed under any test. Our five-page text print took 23 seconds to complete, giving a speed of 13ppm and when we printed the longer, 20-page print it took 1:13, which still gives only 16.4ppm. A text and graphics print gave 9.38ppm.


One reason for these comparatively slow speeds, which is also a cause of the difference between Samsung’s claims and our test results, is that the printer takes a long time to warm up. Anything between 17 and 20 seconds before paper starts to move and if the printer has been asleep, as it often will be in a typical small or home office environment, it can be longer than that. 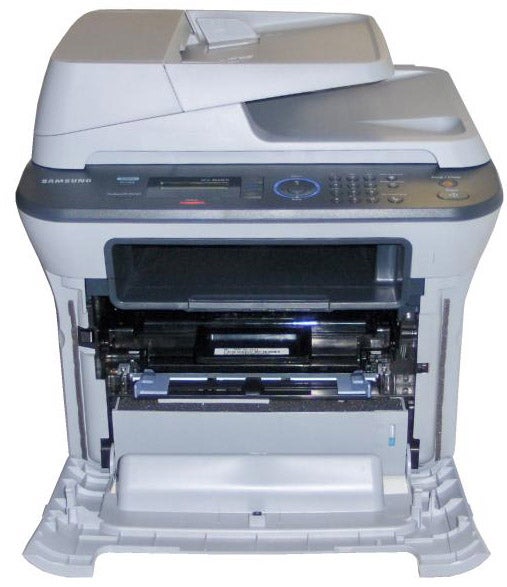 Black print quality is generally good, though it’s safe to say this is true of most mono laser printers and multifunctions. There are very few devices which don’t give more than adequate text print. Graphics print is also good with this machine, though, producing smooth and largely un-banded areas of graphics, good variation in grey tone for representing different colours and very readable text overlays, even on the darker greyscales.


This is reflected in our photo print, too, which gives surprisingly good reproduction for a mono laser. Copying of the greyscale output from this machine is the only place where it’s let down, as the greyscales suddenly get very dark, making it hard to read overlaid text. This is true of straight scans, too, both from the flatbed and from the ADF, so you may have to compensate by changing settings in whatever scanning software you’re using.


There are two capacities of drum and toner cartridge, offering 2,000 and 5,000 pages, though the starter cartridge supplied with the machine gives a meagre 700. Using the high yield, 5,000 page cartridge gives a page cost of 2.28p, including 0.7p for paper. This compares very well with other machines in a similar price bracket, which can cost up to 4p per page, even using their best-case consumables.


The SCX-4824FN is a pretty good multifunction laser printer for general, small-office work. It produces good-quality text, reasonable graphics and although it’s mono photocopies are a bit shaky, its scan and fax facilities are useful additions. It would be useful to have a USB input for memory drives, but the low running costs compensate to some extent.