Laser-based multifunction printers continue to drop in price and Samsung’s SCX-4600 is one of the least expensive we’ve tested. At just a smidge over £100, it’s still some way from being an entry-level machine and is quite suitable as a home and small office workhorse.


Decked out in frosted black with high-gloss trim round the edges, the machine sits squat and purposeful on the desk. The easy-to-lift scanner lid is provided with extending hinges, so you can put a book on the flatbed and still close it. 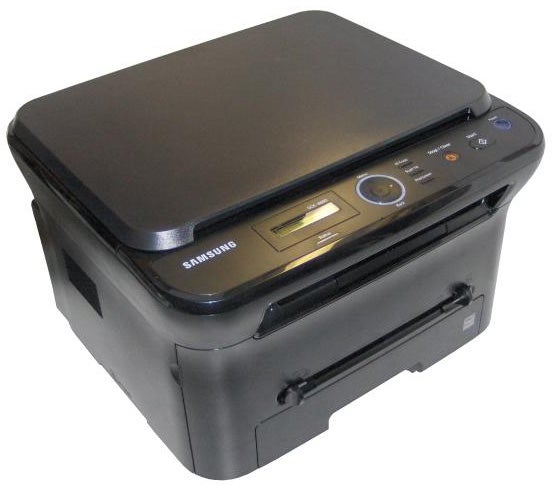 Directly in front of the scanner is a simple but functional control panel, running the full width of the machine. There’s a 2-line by 16-character LCD display which, even without a backlight, is easy to read under normal light. To the right of this are a four-way button ring with an OK button in the centre and a ring of blue LEDs round the outside, which cycles round when the SCX-4600 is printing.


Three buttons to the right of the ring cater for copying ID cards, scanning to a PC and printing the current screen. This last function is so far unique to Samsung laser printers and multifunctions and produces a scaled image of the current screen in a single click. This is a very handy extra, particularly if the screen contains a page from a Web site.


Below the control panel is a slot for output pages and, although this has a small extending paper support and flip-up stop, it isn’t actually needed if you’re using A4 paper, which projects by 25mm or so and is easy to collect when a job is complete. You can lift the scanner section of the printer up slightly if you need to get a hand in to deal with paper jams, but we had no trouble during testing.

A 250-sheet paper tray sits at the bottom of the front panel and there’s a single-sheet feed slot for special media, directly above this. At the back there’s just a single data socket for USB, as this machine has no network connection.


Drivers are supplied for Windows versions from 2000 onwards and OSX from 10.3. Drivers for various Linux distributions are downloadable. Software installation is straightforward and includes basic document management and OCR software.


The only consumable is a single drum and toner cartridge, which slides in from the front, once you’ve folded down the front cover. The cartridge is provided pre-installed, though you do have to remove it, pull off protective tapes and reinsert it before you can start printing.

Samsung continues to make best-case speed claims about its laser printers, which don’t include processing time, just the time the machine is actually feeding paper. Using this methodology, the SCX-4600 is rated at 22ppm. In a more real-world situation, our five-page text print took 24 seconds, which is equivalent to 12.5ppm. The longer 20-page one completed in 1:16, a slightly better 15.79ppm. So, it managed around 75% of the rated speed, which isn’t bad.


The five-page text and graphics print gave a speed of just over 9ppm and a single page copy from the flatbed took 13 seconds. A 15 x 10cm photo print took only slightly longer, at 14 seconds. 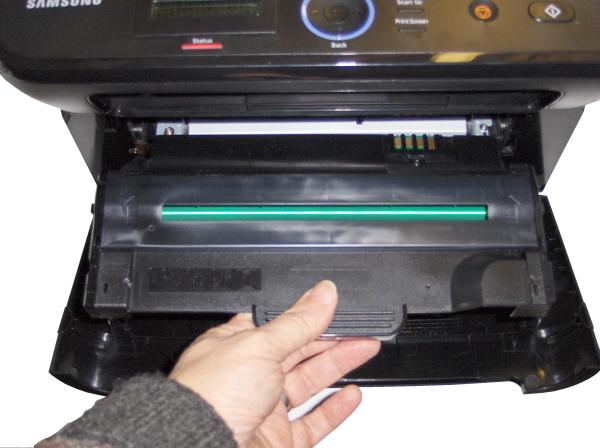 The prints these tests produced were all of very good quality, belying the low-cost of the machine. Text print was crisp and solidly black, with no noticeable spread or spattering of toner and produced well-formed characters, even at small point sizes.


Greyscale graphics are also good, with clean dot patterns and enough shades of grey to distinguish between different colour hues in an original. There weren’t many signs of banding, either. The only duff cannon in the machine’s arsenal is when copying greyscales, which are blotchy and much darker than the originals from which they’re copied. It’s fine for text and solid graphics, but not ideal for greys.


Photo images, which can be printed at up to 1,200dpi, are good for a mono multifunction in this price bracket. They give clean areas of sky, with only a little banding apparent. Detail is good though, as usual, some darker shades tend to black. 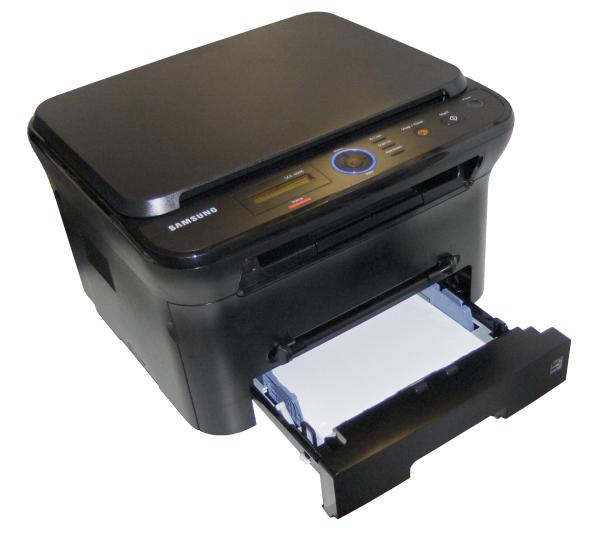 The all-in-one drum and toner cartridges are available in 1,500 and 2,500 page capacities and using the higher yield version gives a cost per ISO page of 3.15p, including 0.7p for paper. This is slightly more expensive than, for example, the £112 OKI MP260, which managed 2.95p from the same calculation. It’s still not a bad result, though, for a £100 multifunction.


This is a well-designed, nicely integrated multifunction printer, which is well capable of handling reasonable workloads in a SOHO environment. It’s fast, easy to maintain and won’t cost you the earth to run. While it’s very much a one-per-desk solution, without built-in networking, extra features, such as the simple, one-click screen print, make it a very attractive proposition.