Samsung did something quite impressive with its Soul U900, which I reviewed back in the middle of last year. It came up with a new type of handset – a slider with a front screen and a small touch panel where you’d more usually find a navigation button. The idea was obviously one that pleased the Samsung design team because it has popped up again, this time in the S7300, which you may also see referred to as the Light Edge. It is available exclusively with 3 in the UK. 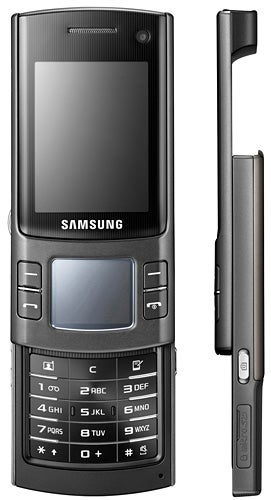 The S7330 is an obvious follow-up to the U900. It looks rather similar and functions in similar ways. It doesn’t offer everything the Soul does, though. Its camera is 3-megapixels where the Soul’s was 5-megapixels for example. But this is still a nice phone at a nice price – free on contracts as little as little as £15 a month.


The S7330 I was sent to review was pink. There are far too many shades of the colour adorning the phone’s metal and plastic casing. For instance, there’s a purple-ish frame around the screen, pale pink elsewhere on the front; slightly different shades on the backplate and fixed part of the back fascia; and a further two shades inside the slide. Samsung really should have chosen two or three shades at most, and stuck with them. Anyway, if you hate the pink idea there is a black option. 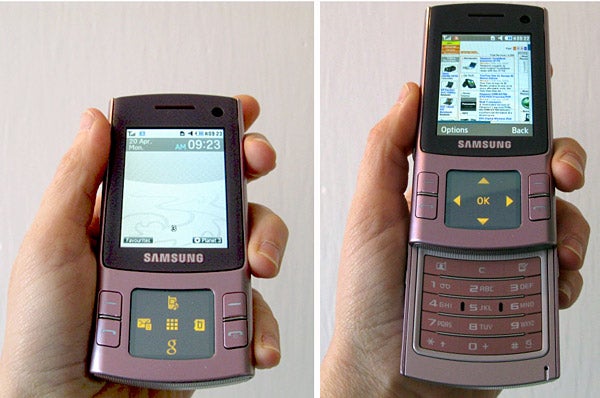 This is quite a tall handset at 104.8mm with the slide closed, rising to 145mm with it opened. The weighting is good and the phone feels comfy in the hand when opened and closed. It is 49.4mm wide and 13.7mm thick. It weighs 110g, which is perfectly acceptable for the pocket.


The 240 x 320 pixel screen measures 2.2in diagonally and looks a bit lost in its surroundings, but there’s nothing wrong with it per-se; it’s just that in these days of large touch-screened mobiles, anything short of three inches seems puny at first glance.

The numberpad under the slide is large enough and is very comfortable to use at speed. Texting fast should not present any problems. With the numberpad hidden away, you are reliant on two softkeys, the Call and End keys and that touchpad. It functions very like the one on the previously mentioned Samsung Soul.


There are up to five options available at any one time, and what you get depends on what application you are in. So, when you are looking at the home screen you’ve got shortcuts to profiles, phone book, messaging, the main menu and a Google screen offering Google search and Google Mail. 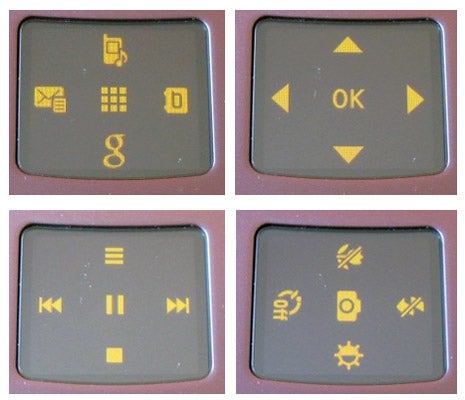 When you are playing music you’ve got forward, back, tracklisting, pause and play controls. When you are using the camera, you can toggle macro mode, flash, make self-timer settings, change brightness and take a shot. The camera options flick round 90 degrees so they are easy to use when you hold the phone horizontally to take photos. It is all quite intuitive, and the tiny bit of haptic feedback you get when you make a press is welcome.


The only real problem is that with all this touchy feely stuff going on, the temptation to tap at the main screen for more touch control is great. Certainly if you’ve used a fully touch-capable handset before you may find yourself hankering for one again here.


As far as the main specifications go, this is a fairly well appointed mobile phone. As it is on 3 you will have guessed already that it is a 3G handset. It supports HSDPA to 3.6Mbps and is tri-band GSM. A front camera caters for two-way video-calling and a button on the number pad area gets you started with a video call.

What it lacks, however, is Wi-Fi and GPS, and automatic screen rotation. And if you are interested in buying a phone on 3 to take advantage of mobile web browsing you might want to think twice about this one. Yes, you can browse, but the small screen doesn’t provide a lot of viewing area, and the phone grumbled at some pages. For example, it told me the TrustedReviews home page was too big for it to handle.


However, there is one group of users who might want to consider this phone as a prime choice, and that is music fans. Not because of the headset connector, which remains staunchly proprietary in its connector type. Nor because of the built in memory, which is limited to just 30MB, (although it is expandable via a microSD card slot on the right edge of the casing). No, music fans may love the battery life. Samsung puts this at 420 minutes of talk and 350 hours on standby. I played music from a full battery charge for an impressive 17 hours 22 minutes. After music playback stopped, the phone stayed alive for a good few hours more giving a total battery life of 22 hours 51 minutes.

And so to the camera. The 3-megapixel lens, flash unit and self-portrait mirror are nicely protected under the slide. It is easy to change some settings via the front touchpad and for others the main menu is no bother to move around. Autofocus, a macro mode, smile shot and panorama mode help things along. It is a great pity, though, that the side button only launches the camera when you are in the phone’s home screen. There’s no camera shortcut if you are in another app so taking quick off-the-cuff snaps is difficult. 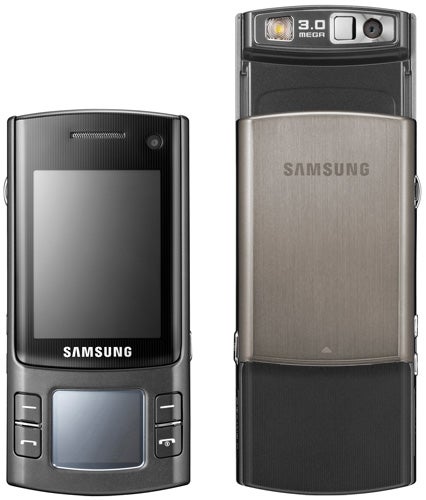 Shots were average with some issues along the way. The coloured dish photographed indoors under normal household lighting is a bit washed out and colours lack vibrancy, but the photo is passable. Outside the chair is pretty good for a camera of this quality, though zooming in on some of the more intricate parts reveals the inevitable lack of ability to capture detail.


The macro mode disappointed the most, though. The flowers were photographed quite close in, and focus is very dodgy. Colour reproduction is poor too. The flowers are all the same colour, tending more to the purple hues in the photo than to the blue ones.

The usual range of software not already mentioned bulks out the handset’s offering. An FM radio, voice recorder, calendar, some basic image and video editing tools, RSS reader, memo maker, task manager, world clock, calculator, unit converter, timer, stopwatch and five alarms. Oh, and this handset’s look is very customisable even allowing you to fiddle with the colours of the icons on that touchpad. More pink, anyone?


This is a slightly below average phone in terms of specifications, but its touchpad may appeal, as may the excellent battery life and low monthly tariff. Don’t expect too much from the camera, though. 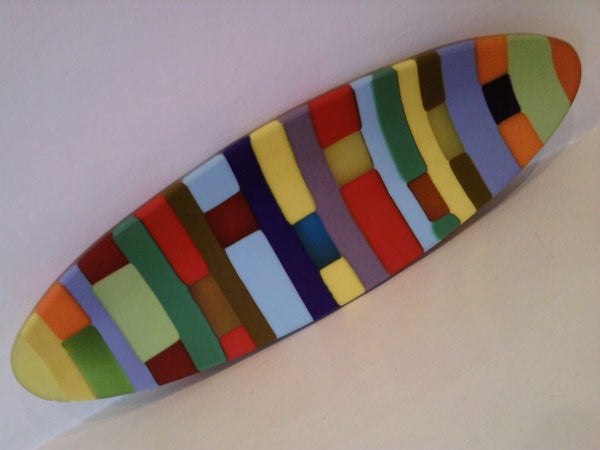 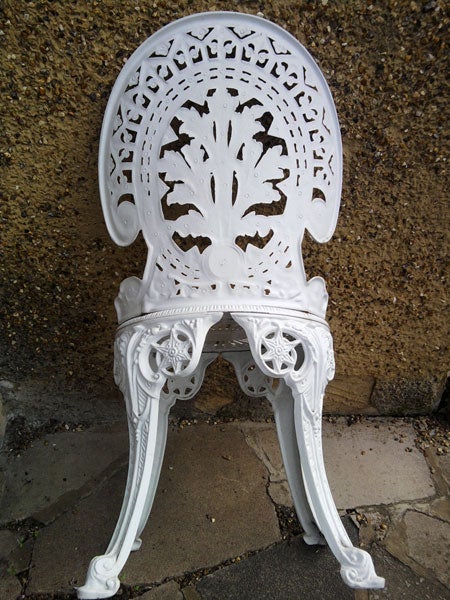 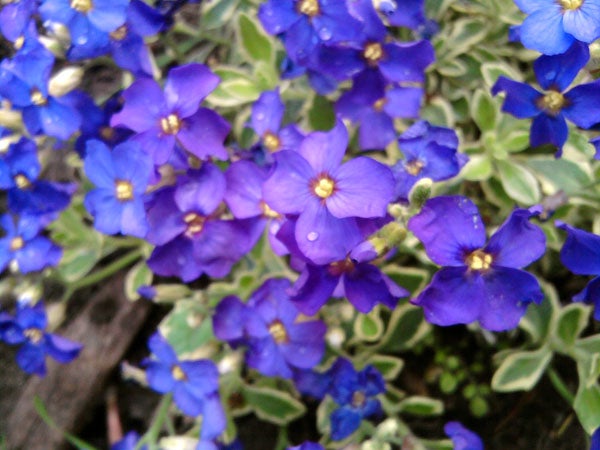