Though the mainstream laptop market still belongs to the
15-16in portable PC, ever more people are looking to replace their ageing
desktop machines for around-the-house browsing and multimedia. Since this
doesn’t emphasise mobility or long periods away from a socket, you would
usually look for the largest screen size that’s readily available, which tends
to be around the 17-18in mark. Samsung’s latest entrant into this arena is its RF711,
an attractive 17.3in multimedia machine that’s filled to the brim with the
latest technology and connectivity. 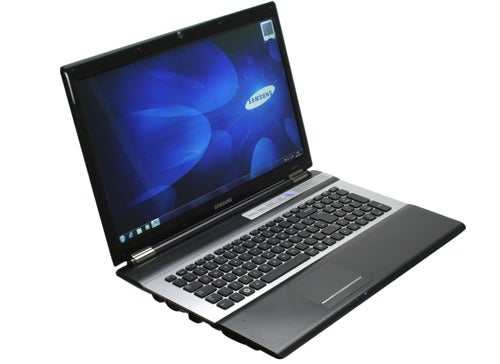 It’s important to get the letters right here, as the very
similarly-named RV711 offers the same stylish chassis, Intel ‘Sandy Bridge’
internals and extensive connectivity, but starts you off with a dual-core Core
i3-380M, 4GB of RAM, a 500GB hard drive and Intel’s integrated 3000-series
graphics – pretty decent for its £473 asking price and perfectly adequate for
the vast majority of users, but a budget machine no matter how you turn it.

At nearly double the price, our RF711-S01 review sample isn’t
quite as wallet-friendly, but does get you a quad-core Core i7-2630QM which
runs at 2GHz by default and can clock up to 2.9GHz, with support for
Hyper-Threading giving you up to eight virtual cores. That’s some serious
number-crunching power, and it will have little trouble with HD video encoding and
other intense workloads that the RV711 might struggle with.

It’s backed by 6GB of memory and a whopping 1TB for storage
(actually two 500GB drives spinning at 7,200rpm). We would have preferred to
have seen a small SSD boot drive combined with a slower 640GB storage drive,
but that would have increased its price.

Driving the RF711-S01’s 17.3in, 1,600 x 900 screen is an
Nvidia GeForce GT540M graphics card with 1GB of dedicated RAM, which uses
Nvidia’s Optimus technology to switch between the fast Nvidia graphics card when gaming and the low power Intel integrated graphics to save battery
life – essentially you get the best of both worlds. Thanks to its relatively
powerful, DirectX 11 discrete graphics, the S01 will serve as a ‘lite’ gaming
machine, unlike its cheaper siblings.

At our regular test settings in Stalker: Call of
Pripyat, the GT540 managed an average of around 45 frames per second (fps) whether
in DirectX10 or 11, a very decent result. Cranking the resolution up to the
screen’s native 1,600 x 900 setting and upping details to maximum, this Samsung still
managed a playable 30fps.

Given these good results we decided to submit the RF711 to
the ultimate torture test with a run of Crysis at high detail on 1,280 x 720,
where the laptop just about limped along with a 21.5fps average.

Naturally, Blu-ray playback is also included on this
machine, where the Core i3 and Core i5 711 models sport DVD-rewriters instead. Finally,
all models carry a HD 720p webcam, Wi-Fi N and Bluetooth 3.0. 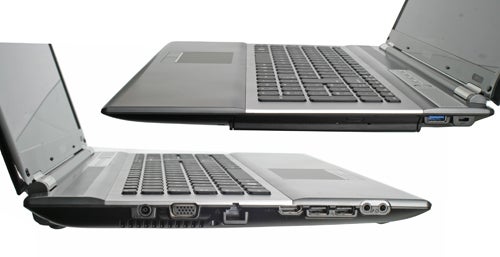 Physical connectivity is also well catered for. There are
two USB 2.0 ports and two of the faster USB 3.0 variety, an SDHC card reader,
VGA and HDMI for video, a Gigabit Ethernet port for wired networking and 3.5mm
headphone plus microphone jacks. That’s pretty much as good as you can expect
on a consumer laptop.

In terms of design, the RF711 is attractive though it
doesn’t quite manage the premium feel of some high-end competitors. On its lid,
only the chromed Samsung logo provides relief from the plain, glossy black
plastic. Fingerprints and other marks will definitely be an issue here, unlike
with the Envy 3D, which was the last premium 17.3in laptop we looked at. Compared to
Samsung’s Duralumin-clad Series 9 900X3A, the RF711 doesn’t exactly exude class, but then that’s
hardly a fair comparison considering this same chassis is used in a sub-£500
machine while the Series 9 will set you back well over £1,000.

Opening the RF711 up reveals a far more attractive and
practical inside. The screen’s bezel is still glossy black plastic, but a
dotted texture provides both visual variety and prevents fingerprints from
being as visible.

Moving on to the base, it’s finished in a combination of
gunmetal and silver plastics that look just like real metal from a distance.
The smooth, semi-matt finish feels quite pleasant and doesn’t suffer from
finger or palm prints, while some subtle blue LEDs for power, wireless and
status indicators enhance the relatively minimalist finish.

The only incongruous touch is its chromed hinges,
which don’t match the silver used elsewhere in this laptop’s interior. 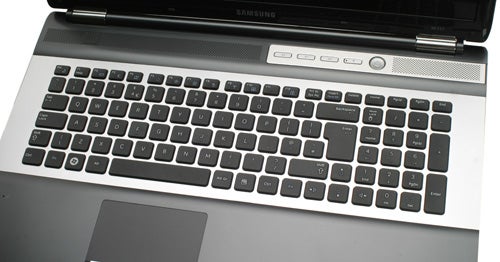 Build quality is decent, though again the chassis betrays
its budget coverage with slight creak and some unwanted flex. However, there’s
not even a hint of flex on the keyboard, a problem many rivals do fall prey to.

Getting to usability, the matt black, isolation/chiclet
keyboard features a flawless layout, with our favourite touch being the
secondary Fn key right next to the cursor keys which give easy access to screen
brightness and volume adjustments (there’s also a separate set of additional volume
controls which join a handy wireless ‘switch’ next to the power button). 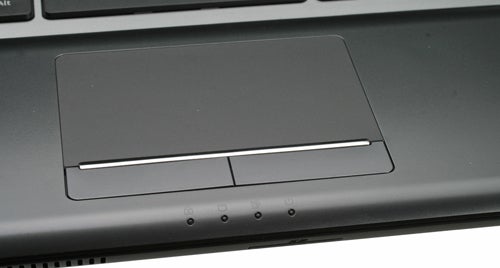 Key feedback is good, especially for a ‘shallow’ keyboard.
Keys are well-spaced and offer a positive click. The whole keyboard is recessed
slightly, allowing your palms to rest comfortably and flat on the palm rest,
and we didn’t find the touchpad interfered with typing. Overall, we’d be happy
to use this as our main word-processing machine.

Thankfully, the touchpad holds up just as well. Naturally it
supports multi-touch and offers a large area in which to execute gesture
controls. Its surface is smooth though not slippery, and its two individual
buttons offer an assured if slightly shallow action. Again it doesn’t match
up to the glass ‘button-less’ pad on the Samsung Series 9 900X3A, but it’s still nice to use.

Considering the RF711-S01 is a potential media powerhouse,
the quality of its 17.3in, 1,600 x 900 screen is an important factor.
Unfortunately, while there are no major complaints, it doesn’t quite hold up
well enough compared to the machine’s specifications and ergonomics.

While there is no backlight bleed, backlighting is slightly
uneven and isn’t helped by (admittedly very mild) contrast shift from nearly
every angle. Horizontal viewing angles are otherwise good but vertical ones are
as poor as ever, making it important to tilt the screen just right to get the best viewing experience. It’s also a
good idea to avoid strong ambient light due to the screen’s glossy finish.

Blacks are deep and dark detailing is adequate, though the
RF711’s display couldn’t distinguish between the three darkest shades in our test, meaning
you might lose out on subtle details in gloomy movies and games. It’s a little
easier to discern subtle whites, but that’s not an ideal compromise. There’s no
banding and sharpness is generally excellent, but we did spot noticeable
dithering.

We’ve seen better on many premium multimedia laptops, and
after the superb showing of Samsung’s Series 9 900X3A, we must admit our hopes were high. However, many consumers
will still consider the RF711’s visual performance perfectly acceptable. 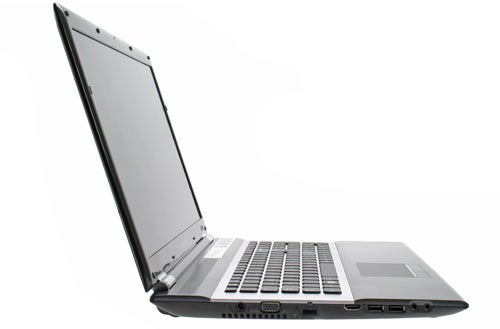 It’s pretty much the same story with the speakers. Though
they manage quite a bit of volume, distortion creeps in quickly. Even when this
is eliminated, there’s a subtle lack of clarity, detail and punch that makes a
set of headphones (like the affordable MEElectronics HT-21) or external speakers a definite recommendation here.

When it comes to battery life, the RF711 doesn’t stand out
either. Its 4,400mAh/48Wh battery only lasted two hours and nine minutes in
Mobilemark’s non-intensive Productivity test – and that’s with Wi-Fi and
Bluetooth turned off. Playing a DVD we only achieved just over an hour and a
half, though that was with screen brightness turned up full.

Only the HP Envy 17 3D fared worse out of our recently reviewed 17.3in laptops, and that
machine used an older, more power hungry CPU. Even then, the
XPS 17 shows it’s still possible to get good battery life using Intel’s
previous generation internals. Basically, most of the time you’ll want to keep
Samsung’s multimedia monster near a socket. 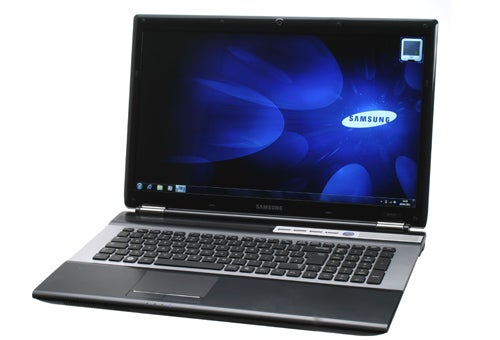 Value now becomes a pretty important criterion for Samsung.
Thankfully, this is where the RF711 shines – if you can live with its average
screen, all-right speakers and poor battery life. A similarly-specified XPS 17,
for example, would set you back £1,100 – over £250 more. On the other hand,
this does get you a better chassis, superior connectivity, a richer audio
experience and longer battery life.

Samsung’s RF711 is an affordable and stylish multimedia
powerhouse that’s stuffed with features and connectivity yet is held back by an
average screen and speakers, not to mention battery life that can be measured
in minutes rather than hours under intensive workloads. However, if you want
its quad-core power, don’t mind its weaknesses and your budget won’t stretch to
pricier rivals, it’s definitely worth considering.