The best fridge freezers will achieve your thermostat temperature accurately and keep the temperature very consistent throughout the cycle where the compressor switches on and off. The less swing in this temperature the better fresh food, particularly fruit and vegetables, will be preserved and lower the overall energy consumption.

As usual we loaded up the Samsung with 0.5kg of produce per 10 litres of fridge space and 1kg of frozen food per 10 litres of freezer space. While that required a trip to the greengrocers and several jars of home-made jam for the fridge, a few packs of frozen peas and a ready meal pretty much sorted our freezer requirement. We also put in a container with two litres of room temperature water to test fresh to frozen time, and how frozen food fares in a power failure situation.

The fridge freezer is kept in an environmental chamber at around 18-19 degrees C to simulate a UK kitchen, and we opened the doors six to eight times per day to simulate normal use. Due to the Samsung penchant for odd numbers on the thermostat, we set the fridge at 3 degrees C and the freezer at -19 degree C – one degree cooler than our regular test practises. 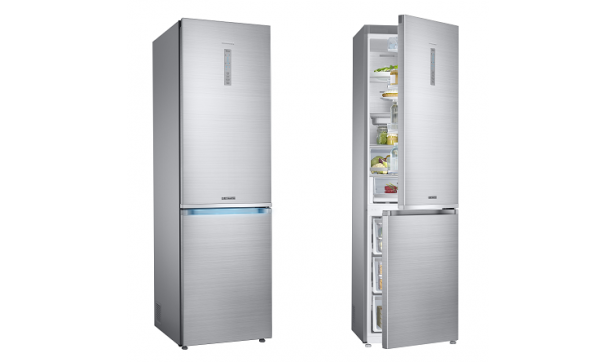 In the fridge compartment, the RB5000 turned in excellent average-temperature results with all shelves and both drawers being within a degree or so of the temperature we set on the thermostat. However, while the vegetable drawer was very consistent in temperature throughout and barely wavered by half a degree, the shelves and the meat drawer temperatures swung around quite a bit.

The main fridge space bounced between 1 and 7 degrees C, while the meat drawer peaked at 4 degrees, but frequently dipped right down to just below freezing. That will keep meat and fish very well preserved (like keeping them on ice) but the swing in the main compartment won’t do soft fruit and veggies any favours. That said, with the size and temperature stability of the vegetable drawer, you’re unlikely to have your plums and peaches in the main fridge space anyway.

It is a very similar story in the freezer. This offered very consistent average temperature of -19 degrees C across all three drawers. Our fresh food sample froze down in a very quick 14 hours and remained within +/-1 degree of the average temperature throughout.

But all three drawers showed a noticeable temperature swing through the compressor cycle, bouncing between -23 and -16 degrees every hour and a half or so. This is a fairly good result, but not the super stable freezer temperature that we have seen in the more upmarket RB7000 and RB8000 Chef Collection models from Samsung.

Similarly, the three-hour power failure test results were only average. Our frozen food sample rose by almost 7 degrees C during this period, giving an estimated food safe limit (where frozen produce begins to defrost) of around 10 hours. However, when the power came back on the Samsung proved very efficient at bringing the freezer, and our frozen food, back down to temperature quickly.

The RB5000’s A+ rating is two whole plusses below the A++ rating on Samsung’s Chef Collection models, so energy consumption was certainly likely to be a little higher. The lower rating is almost certainly due to the very thin walls of the appliance where Samsung has tried to maximise the usable space. In our tests, in our constant 18 degrees C environment, the RB5000 used around 750Watts per day, or about 11p.

Over the course of year that would add up to 274 kWh, which will cost you approximately £41 if you’re paying an average tariff of 15p per kilowatt hour. In a hot kitchen, or where kids are opening that huge fridge door more frequently, the energy used is likely to go up to or above the 314 kWh per annum stated on the energy label. That is about right for an A+ appliance. To put that into perspective though, that figure is almost twice as much energy as Samsung’s A+++ Chef Collection models used in our tests. 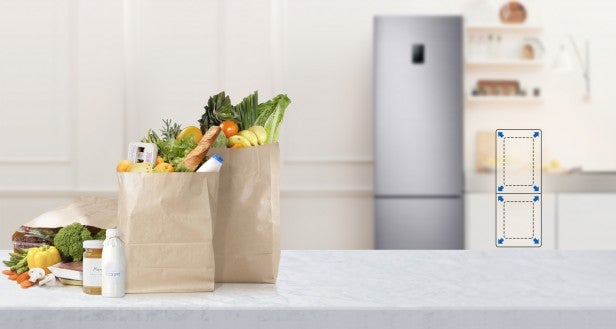 The RB5000’s huge, well-appointed fridge and relatively small, basic freezer will certainly polarise opinion, as will the tall overall height. For those with just the right sized space to fit it and that aren’t reliant on huge freezer capacity – or that have a second freezer – it’s ideal.

We love the flexibility in the fridge and that stainless steel finish certainly looks the part too. While not quite as ‘wow’ technically or feature-wise as Samsung’s Chef Collection models, the RB5000 is a solid performer for those looking to really maximise their fridge space.

While not a class-leader in energy efficiency and performance, this large fridge freezer is a solid performer that will be ideal for certain households.