Though the likes of Dell offer the option of colourful lids and designs, in general PC manufacturers shy away from bold colours. Anything grey, black, or brown-ish goes down well, as has white in times past. Samsung, however, is unusual in making its laptops more than a little colourful. For the R580 and R780 we reviewed earlier this year the colour of choice was red, but the new R590 opts for a fetching deep blue instead.

Aside from the change of colour, the R590’s chassis is more or less identical to its predecessors. Both the lid and body are punctuated by a pretty swirling pattern, and the touchpad is flanked by small blue LEDs on each corner. One difference, however, is that the R590 has a seamless, flat bezel surrounding the screen. This looks cool, but does suffer reflections worse even than the standard reflective finishes of most laptops. 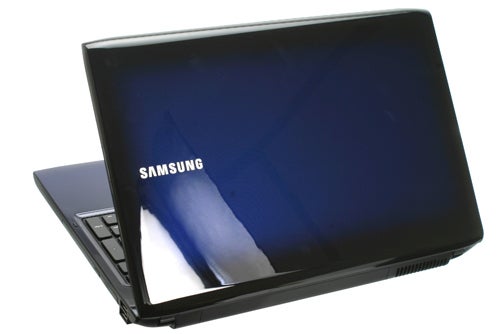 In general the design is an attractive one. The R590 mightn’t be as thin or light as the Q530 we reviewed earlier in the week, but its 2.6kg weight isn’t too hefty and it’s no thicker than the majority of laptops in this segment. Our only pressing criticism, a common one as it happens, is that the glossy finishes are very fingerprint prone – a problem not present on the Q530.


Where the R590 excels is in its generous specification. Despite actually costing less than the Q530, it boasts a faster 2.4GHz Intel Core i5 processor. Added to the 4GB of RAM, 500GB hard drive and a capable 1GB Nvidia GeForce GT 330M graphics card, and the R590 ticks a lot of useful boxes. Also under the features column is the now obligatory 802.11n Wi-Fi, Bluetooth 3.0 and Gigabit Ethernet, not to mention a 1.3-megapixel webcam. 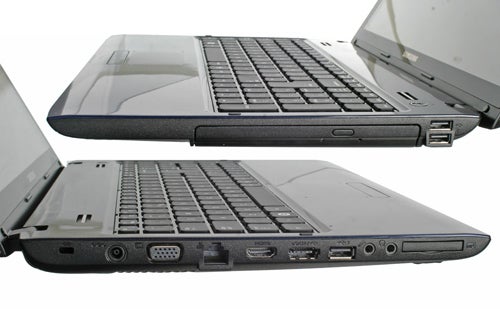 You’re unlikely to be left wanting for connectivity, either. There are four USB ports, one of which doubles as an eSATA port, while another offers standby USB charging. HDMI and VGA are present, too, and the R590 is unusual in retaining a 34mm ExpressCard slot – useful if you want to add USB 3.0 support, for instance. Also included, but not shown above, is a memory card slot that’s on the front edge.

Samsung tends to use a lot of common components among its laptops, which is no bad thing as the keyboard on the R590 is just as good as its other machines. As is the modern fashion the keys are isolated, and there’s also a numeric keypad for making quick calculations. Key actions are sharp and precise, and don’t suffer the shallowness often attributed to isolation keyboards.

However, also in common with other Samsung laptops of late, the R590’s touchpad is positioned to the right of the Spacebar. Consequently, when typing, your palm tends to rest on the edge of it, jogging the cursor and often causing errors. It seems a trivial, minor problem at first, but the reality is a good deal more irritating. If you’re concerned, it’s worth giving the R590 a test run before purchase. 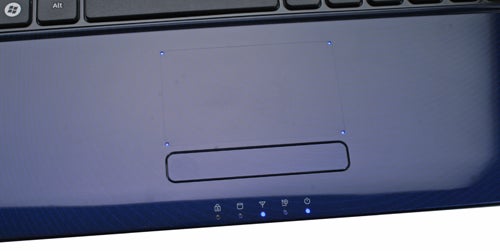 Aside from getting in the way, the touchpad is very good. It’s a good size, has a nice, low-friction surface and its buttons are precise and easy to located. We’re not sure the four LED lights that demark each corner add much, but they don’t hurt.


As mentioned earlier, one of the side effects of the fetching seamless bezel is the 15.6-inch screen is quite reflective. Not a problem if indoors, where this machine is likely to spend most of its time, but not a positive trait in the great outdoors. In its element, however, the display is impressive. Its 1,366 x 768 resolution is nothing outstanding, but it’s vibrant and reveals plenty of detail in videos and photos. 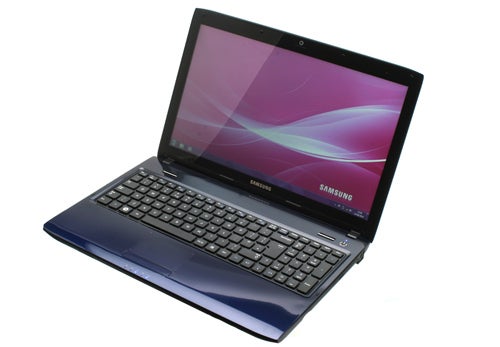 You’ll need a decent set of headphones or speakers to hand, however, as the R590’s speakers are thoroughly mediocre. They just about pass muster for watching online video clips and maybe the odd TV show on BBC iPlayer, but for anything else they lack the mid-range clarity for genuine enjoyment or immersion.

As discussed earlier in the review, the R590 is actually faster than another Samsung laptop, the Q530, despite the two costing more or less the same. Indeed, the R590 even outperforms the Asus N53Jn, which can be had for around £1,000. Admittedly it has more features than the Samsung, but it shows you’re getting good performance for the money.


In practice, the R590 is the kind of machine that can genuinely replace a desktop. It won’t break sweat with day-to-day computing tasks, and is fast enough to tackle more demanding tasks like photo editing and video encoding. It’s an all-round workhorse.

This applies equally to games, where the R590 also performs well. It registered good results in both our tests, though the more demanding Stalker: Call of Pripyat demonstrates you’ll need to stick to medium detail settings for the latest games. Less demanding titles, on the other hand, won’t pose any meaningful challenges.

Battery life isn’t very long, registering around three hours of productivity, but a fair way short of two of DVD playback. Reduce the brightness and you’ll get a little more than this, but the reflective screen demands a slightly higher brightness than other laptops.


Mediocre battery life is easily forgiven, however, as in every other respect the R590 is a very good laptop and a great deal to boot. Some may find the colourful finish, and its all-round glossiness, off putting, but if not then it’s definitely worth a look.


A powerful, flexible and good-looking laptop, the R590 can service all your computing needs without breaking the bank.