Is it any wonder notebooks are taking over the world? Only a little while ago we looked at the Medion Akoya S5610, which won our Recommended Award by offering so much for so little. And though you can still get better-specified desktop systems for less money than the Akoya’s £500 asking price, there is simply no comparing to the all-in-one convenience and portability of a notebook.


Samsung has always been a strong player in the value notebook market, also winning its fair share of awards on TR. At just over £650, its new R560 Notebook might not seem all that affordable, until you consider the impressive specifications this 15.4in machine brings to the table, including discrete nVidia 9600GS graphics. 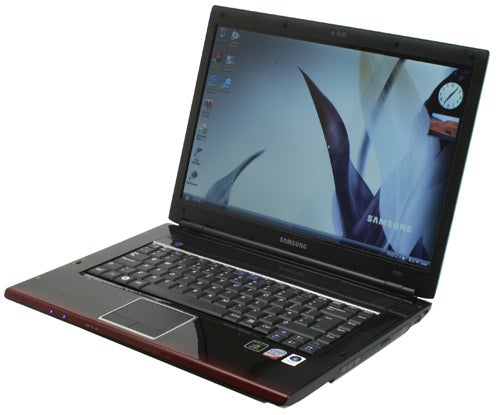 It is part of Samsung’s extensive Touch of Colour range, which in the case of notebooks gets you a band of colour across the palm-rest, visible whether the notebook is open or closed. For now, this means you’d better like red, since it’s the only colour available and though we feel the implementation isn’t nearly as subtle or attractive as on the company’s LE32A656 32in LCD TV, many will still like the way it complements the rest of the R560’s piano black chassis.


As ever, the glossy black finish is a fingerprint-magnet, so it’s a good thing Samsung always provides a soft cleaning cloth. As long as you don’t mind the high maintenance, it provides an attractive look.

Samsung’s name is moulded in silver lettering on the lid, which works well against the shiny black. Opening the notebook up, it’s aesthetically very similar to the previous Rose Red TOC notebooks we reviewed, the Q310 and the Q210. In fact, the only change is a silver trim that now separates the matte charcoal touchpad from its glossy black and red surroundings. This is complemented by a narrow silver strip above the keyboard and though combined they provide a little contrast, opinions in office were divided as to whether they were improvement over previous offerings.


Above the keyboard there’s a dotted section, which does a good job of hiding the perforated speaker grills, while the power button sits flush with this section, glowing blue when the R560 is turned on. Likewise the activity indicators for hard drive or wireless activity and such are blue when active, easily visible from the notebook’s front even with the lid closed. Surrounding the 15.4 inch screen is a matte screen bezel that will please many and this is matched by a matte keyboard, so at least you can’t muddy the keyboard with your greasy fingers.

Inputs are another area where little has changed from the Q310, except for placement. Unfortunately, Samsung still doesn’t offer e-SATA, which is becoming ever more prevalent and essential if you want to swap large files between external drives. Digital audio connectivity in the form of S/PDIF out is another regrettable absentee, though the sorts of price driven users that might opt for the R560 are unlikely to miss such a feature.

Besides these absentees, the rest of the selection is decent. On the left is a single USB port, VGA and HDMI for video connectivity, 3.5mm headphone and microphone sockets and a 54mm ExpressCard slot. On the the front there’s only the memory card reader, while the right is quite sparse, housing a LightScribe capable DVD-writer and Kensington lock slot.


On the notebook’s back there are a further two USB sockets, the power socket, a Gigabit LAN port and the good old 56K modem. Wireless connectivity, meanwhile, is well taken care of by 802.11 Draft-N Wi-Fi and Bluetooth 2.0+ EDR.

Getting to usability, the touchpad is rather good. It’s large enough, pleasantly textured and responsive, while the solid left and right buttons are also large and feature good feedback with a positive click. Likewise, the keyboard is pretty solid. It has large, well-shaped keys and an excellent layout, including Samsung’s signature secondary function key to the right that allows one-handed adjustments of brightness and volume. If anything the key travel is little shallow, but keys do have a firm and crisp feel to them and for a notebook at this price, it’s a pretty decent effort. 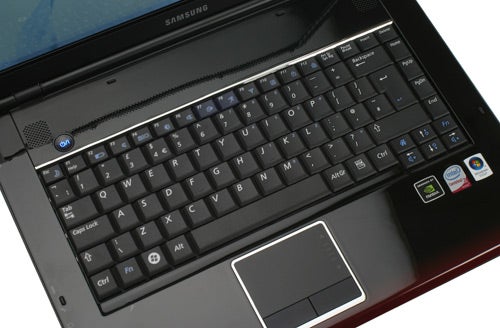 After using the Medion Akoya S5610 one might bemoan the lack of number pad as well, but the Medion is more or less exclusive in having this feature so it wouldn’t be fair to penalise Samsung.

So far, there’s little to explain this Samsung’s relatively high compared to the plethora of sub-£500 notebook out there, but that changes when we get to the specifications. To be honest, it’s pretty cool when you can list a 250GB hard drive and a Centrino 2 Intel Core 2 Duo P7350 processor (running at 2.0GHz with a 1066MHz FSB) as the least of a notebook’s components.


Although you’re unlikely to see much real-world benefit to the 4GB of RAM being 1066MHz DDR3 rather than the usual 800MHz DDR2, it’s still rare at this kind of price point. Moreover, despite the 3GB practical limit imposed by the 32-bit version of Windows Vista Premium, having 4GB not only allows the memory to run optimally in dual-channel mode, but means you won’t have to upgrade even if you switch to a 64-bit OS. 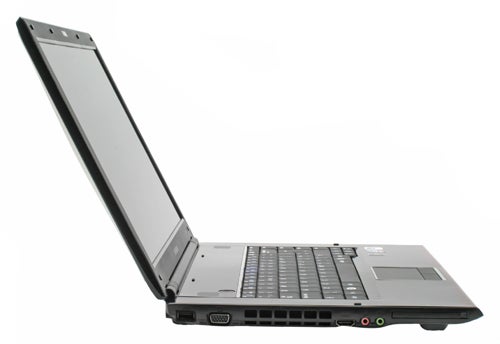 The icing on the cake is the R560’s discrete graphics card; an NVidia GeForce 9600M GS with 256MB of DDR3 RAM. To be blunt, you won’t get a great gaming experience on any notebook using less than a GeForce 8800/9800 series chip, but if you’re willing to put up with a few compromises (or some major ones in the case of recent titles), the 9600 does a better job than anything you’re likely to find under a grand.


Naturally, this is reflected in our TrackMania Nations Forever notebook benchmark, which this Samsung happily chomped through at 52.4FPS, with detail set to medium and at the screen’s native 1,280 x 800 resolution. Even at very high quality and two samples of anti-aliasing enabled, the 9600M GS managed a (barely) playable rate of 18 FPS. 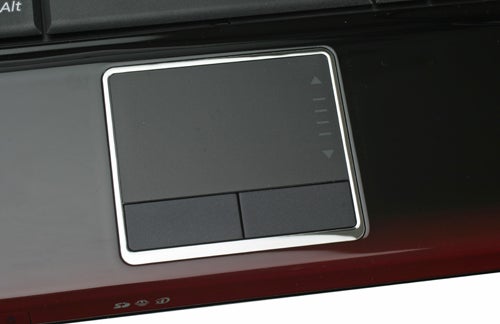 Of course, without a decent screen to see everything on, even the best graphics chip won’t make a good entertainment system. This is another area where the R560 is quite strong, but only under certain conditions. Its 15.4 SuperBright LCD does an adequate job in greyscale differentiation (for a notebook panel), meaning you’ll get a fair amount of dark detailing in films. There was no sign of banding or backlight bleed either and even at lower brightness levels colours are still vibrant, with sharp text being a nice bonus.


Unfortunately, these positives are tempered by one fairly major problem: they’re only apparent from a very narrow ‘ideal’ viewing angle. If you don’t angle the screen right, blacks become greyed over, and strong colour and contrast shift make for a far from pleasant entertainment experience. A high-gloss and incredibly reflective finish doesn’t help matters, unless you’re looking for a portable mirror.

As ever the speakers are rarely a strong point of any laptop (with Toshiba’s Satellite A300-177 being a notable exception) and the R560 doesn’t break the trend. Audio sounds tinny and distorts easily, lacking both volume and depth even at maximum volume. Thus a set of headphones or something like the excellent Edifier M300 Plus 2.1 speaker set are worth investing in.


Battery results, on the other hand, were fairly encouraging, with the R560 stopping just a minute short of three and a quarter hours in our Productivity benchmark. As demonstrated in the Reader test, with frugal use you can easily eek three and a half hours out of the machine and a DVD at maximum brightness lasted a decent two hours and ten minutes. 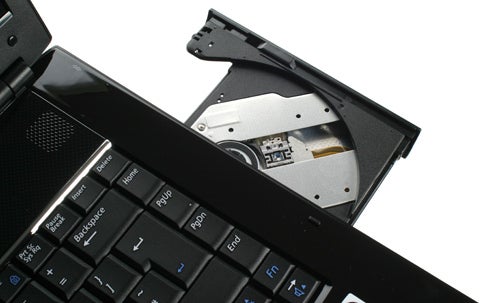 But is the Samsung R560 worth your precious cash? There is no question that it’s excellent value for the hardware you’re getting, even if certain components in that hardware are not exactly budget-friendly. The 4GB of DDR3 RAM, for example, is not only more than the OS will use, but DDR3 only offers a slight increase over DDR2 in performance for a large increase in cost.


So, if f you’re into portable gaming but can’t afford better graphics, then the R560 is definitely worth considering. If on the other hand you’re after a basic 15.4in notebook for everyday use and the occasional film, then the Samsung R510 is a far better option since it is now readily available for £390 online. 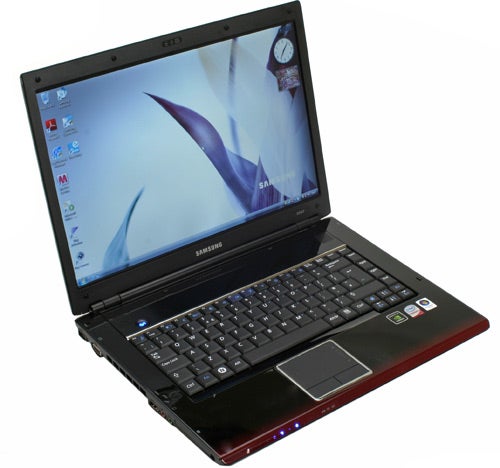 Its most significant competitor, however, is Medion’s Akoya S5610. While the R510 offers far better battery life, slightly more speed, superior graphics and, from the right angle, a better screen, the Medion gives you more connectivity and a full number pad for £155 less. In the end it’s a tough call to make, though if you intend to do any gaming or use GPU-accelerated applications, the Samsung’s 9600M GS alone is worth the premium.


Samsung’s R560 is let down somewhat by its screen’s poor viewing angles, but remains a very powerful notebook which is good value for what you get if you need its power.