This isn’t the first time we’ve looked at the Samsung R530, but the JA02UK model we have here is a new version of this budget laptop that likely hopes to tempt the lucrative back-to-school and student markets. This much can be garnered by the sub-£500 price, but also from the decent spec that includes a capacious 500GB hard drive. 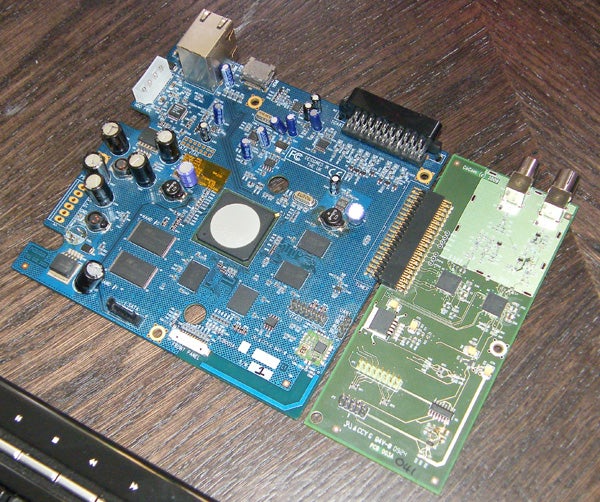 One rarely expects great visual splendour from budget laptops, but the Samsung R530 is better looking than most. Samsung’s restrained approach to design helps, as the inside of the machine is clad entirely in textured, matt silver plastic that looks good and is far more durable than the gloss finishes of many laptops. Samsung has added a little colour to the lid, though, in the form of a graduated black to red finish with an imprinted pattern. It’s nothing too alarming, but it does brighten things up a jot.


Thanks to its 15.6-inch screen, the R530 falls comfortably within the desktop replacement bracket. At 2.5kg in weight, however, it’s not totally importable so long as you have a decent bag to carry it in (e.g. Pakuma Akara A1). If you take it out on the road, the R530 should survive a few bumps and scrapes. Rugged it isn’t, but the basic build quality is sound and the comparative lack of scratch prone surfaces is a rare bonus. 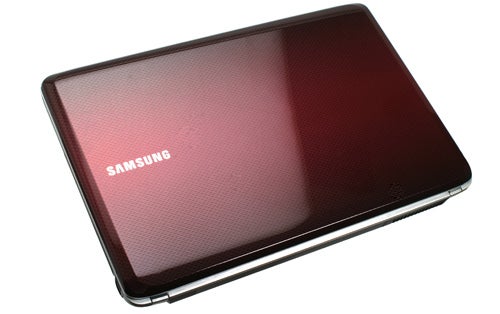 Inside, the R530 employs a relatively low-end Intel Pentium T4400 processor – a minor downgrade on the previous R530 we saw. It uses previous generation Intel processor technology, but it’s still a more than able performer. Its two-cores run at 2.2GHz and have a 1MB Cache to share, and Samsung hasn’t held back in supplying 4GB of RAM and a 500GB hard drive to go with it.


It’s baffling, however, that Samsung ships the R530 with a 32-bit version of Windows 7 Home Premium. This means only 3.5GB of the provided memory can be addressed, which is a bit of a waste. Don’t expect to enjoy too many games on the R530, either; the Intel integrated graphics can cope with only the most basic games. 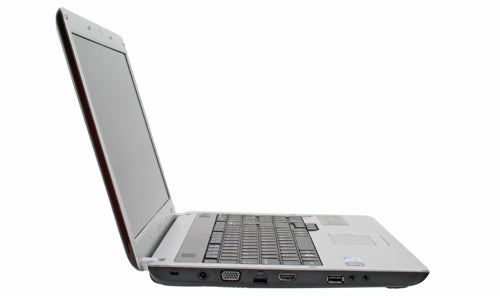 At this price it’s no surprise to discover there’s no Bluetooth, and that the wired networking is of the slower 10/100 Fast Ethernet flavour. You do get 802.11n Wi-Fi, however, and other essentials like a webcam are present. There’s nothing to get excited over here, but at least you’re not paying for stuff you don’t need.

Just like the specs, the connectivity on the R530 is as basic as it comes. HDMI is included for digital video outputting, as is the old-school VGA alternative. There are three USB ports, two of which are next to the DVD drive and could potentially block one another off if using large devices. On the front is a memory card reader, and there are two audio jacks for audio connectivity.

One of the R530’s best elements is the keyboard. It’s nice and large, and features a useful numeric key pad to the right. Best of all, however, are the nicely defined key actions. Matched to a good layout, they make typing on the R530 an unlikely pleasure. Laptops of this price so often fall foul at this point, so the R530 gains extra brownie points.


Regrettably Samsung has persisted in an error it was also guilty of with the Q330, its 13.3-inch offering. Instead of putting the touchpad directly below the spacebar, it’s set slightly to the right of it. Consequently, when typing, it’s easy for your palm to jog the pad and the cursor on the screen. This is annoying, and can result in frustrating errors when typing. It can be solved by increasing the sensitivity of the ‘Palm Check’ feature of the touchpad driver, but without a little guidance this setting is very hard to find.

It seems a trivial thing, but a company of Samsung’s experience ought to be able to get this stuff right by now. Nonetheless, positioning aside, the touchpad is very good. Its surface glides smoothly, and the two buttons offer decent feedback. It also features the now obligatory multi-touch support, and it works perfectly well.


For a sub-£500 laptop, the R530’s screen is particularly good. Though viewing angles are predictably shallow, the display produces crisp, clean colours, decent blacks and is very sharp and bright. It doesn’t have the fidelity for colour critical work, but for general image editing and video viewing it’s more than adequate. 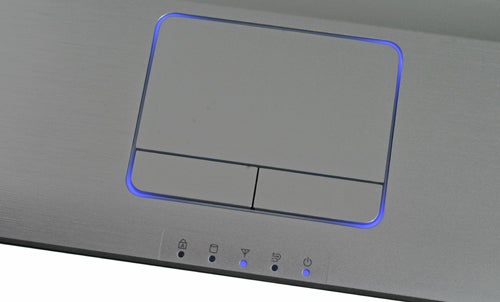 While Samsung’s laptops tend to have good screens, the opposite can be said of its speakers. Those on the R530 aren’t terrible, but like most laptops they lack any mid or low-range power and merely serve as a fallback when nothing better is to hand.

At this price one doesn’t expect amazing performance, but the R530 is still competent enough and won’t have normal users pondering too much about speed. In our testing the slightly downgraded processor did score lower than the previous R530 we reviewed, but on the whole performance was comparable. Had Samsung actually installed a 64-bit OS, it might have done better.

What does this mean in the real-world, though? While this isn’t the machine for processor intensive video editing, its dual-core processor and reasonable clock-speed ensure it can cope perfectly well with day-to-day multi-tasking. HD video, in all its forms, plays faultlessly and there’s enough memory to ensure you can install lots of Chrome Extensions (for instance) and not worry about running out.

Thanks to Intel’s HD Graphics, the R530 is no gaming machine. It didn’t even manage a playable frame-rate in TrackMania, which doesn’t demand much. You’ll still be able to play older titles, however, and if you don’t play games then its lack of prowess here won’t concern you.


Likewise, while decent battery life is important, the R530 isn’t really portable enough for it to be major concern. Still, it is a little disappointing to find this version has worse battery life than its predecessor, lasting a little over three hours in our productivity test and less than two of DVD playback. Both are around 30 minutes less than before, and are nearly identical to the Acer Aspire 5551 we reviewed a few weeks ago.


For the money the Samsung R530 is a decent laptop, and benefits from a particularly good screen. Its large hard drive is also a plus point, but a little more attention to detail in the design is required.