Samsung isn’t as big a name in notebooks as it is in televisions and mobile phones. But, with a well deserved reputation for quality and style, any new product from the Korean giant comes with a healthy level of expectation. Having made a big splash last year when in first launched its ‘Aura’ notebook concept, it has returned and refined its design with its latest offering, the R410. 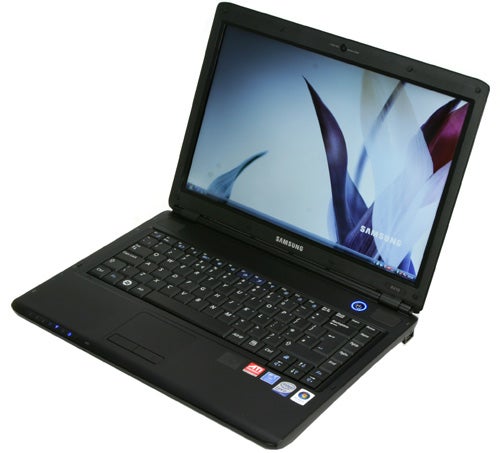 A follow-up to the original Aura laptop, the R20, the R410 is an affordable 14.1in model aimed at people who want a moderately portable all-rounder. Weighing 2.4kg, in essence it’s a compromise for those that find 15.4in machines too heavy and bulky, but find the smaller screens and keyboards found on 12.1in and 13.3in laptops uncomfortable to use for long periods.


Outwardly the changes in appearance are quite subtle. You’ll still find that glossy black lid that’s so recognisably Samsung, but everything about the R410 looks and feels a little more accomplished. Where the R20 looked slightly angular, the R410 is smooth, rounded and pleasant to handle. This “smoothness” is continued in the finishing. Whereas inside the R20 had a slightly gritty, textured feel, the matte plastic inside the R410 is…well, it’s smooth. 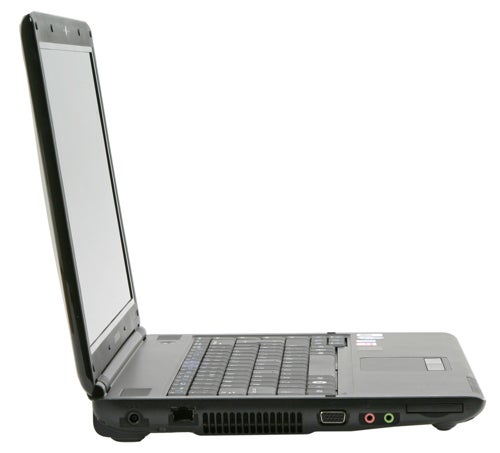 There are few other nice touches, too. Around the edges are symbols to help you locate ports and the touchpad is nicely integrated flush into the surface. Meanwhile, Samsung has finally got its keyboard layout right, with the Fn key sitting inside of the Ctrl key. This was the only thing that really irritated about Samsung notebooks of the past and, as a consequence, the keyboard on the R410 is really very good. Keys are light, lighter than many, and have a nice level of depth and response and the now adjusted layout has no discernible problems.


Another area of improvement is the glossy black lid. Predictably, it’s still a magnet for fingerprints (a cleaning cloth is supplied), but Samsung has applied a new coating that makes it far less vulnerable to scratches. Anyone who has used or owned any of Samsung’s previous generation of notebooks will appreciate this point and though this isn’t to say the R410 is totally scratch proof, it’s nothing like as bad as before. 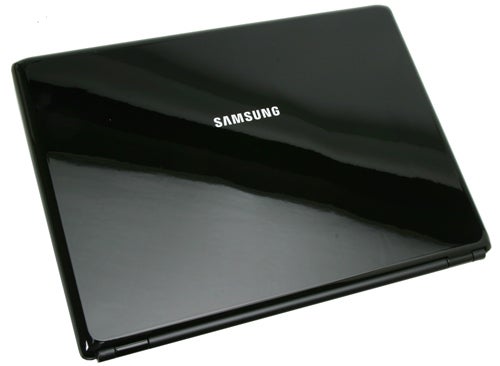 This should help keep the R410 looking good for longer and there’s no doubt this is an attractive machine. It may not be as eye-catching as some, but it has a classy simplicity that’s hard to dislike.

Inside, however, the R410 isn’t anything like as interesting. Directing proceedings is an Intel Core 2 Duo T5550, with two cores running at 1.83GHz with a 667MHz front side bus and 2MB L2 Cache. This is supported by 2GB of RAM and somewhat unusually is all based on the ATI Radeon RS 6000ME chipset, rather than one of Intel’s. This does mean, however, that you benefit from the slightly superior ATI Xpress 1250M integrated graphics. 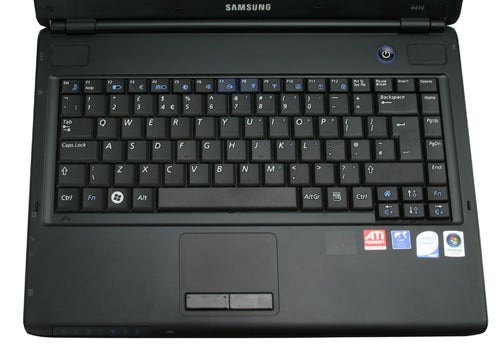 Another more useful feature is the 320GB 5400rpm hard drive. This is very generous for a notebook costing less than £500 and allows for more photos, music, and video than the majority of people will need. As ever there’s a DVD Re-Writer as well, so there’s always scope to move data onto disc instead.


Everything else, though, is fairly standard. You get 802.11 b/g Wi-Fi and Gigabit Ethernet for network connectivity, but no Bluetooth. There’s a 1.3 Megapixel camera for video chat, but physical connectivity is fairly limited. A single D-SUB (VGA) port is the only video output, no HDMI here, with 3 USB ports, a 34mm ExpressCard slot, headphone and microphone jacks and a 3-in-1 card reader rounding off the features. Other absentees are a hardware wireless switch and media playback keys, features that are increasingly standard in this price range.

As with most Samsung notebooks, the screen is a good one. It has a glossy finish and a 1,280 x 800 native resolution, is bright, sharp and as noted previously the 14.1in size is nice one for general viewing. An even backlight helps film viewing and though it’s not the most colour accurate display around, for the price one can hardly complain.


It’s something that can’t be said of the speakers. One never expects miracles on notebooks, particular on mid-sized ones such as this, but those found on the R410 are particularly disappointing. They lack any real bass, aren’t especially loud, and will quickly necessitate a decent pair of headphones or desktop speakers.

Happily, Samsung does gain some brownie points for not overloading its machines with useless software. You’ll find all the basics, such as DVD playback and authoring software and a trial version of McAfee Virus Scan, while Samsung’s own software isn’t overbearing and is generally useful.


One final useful feature comes on the battery pack, which has a battery meter. This is an invaluable little tool, enabling you to check your batteries charge without powering up the system.

If anything, then, the R410 isn’t the most feature rich notebook, while the speakers and the lack of smaller touches such as a hardware wireless switch and media keys do prove a little disappointing.

But it’s performance, specifically battery performance, that’s the really disappointing aspect of the R410 – even compared to Samsung’s own R60 Plus, whose battery life was by no means spectacular. In the MobileMark 2007 Productivity test it managed two hours and 20 minutes, while in the lower intensity Reader test it just edged past two and half hours. In DVD playback, meanwhile, it powered down just a minute short of one hour and 40 minutes.


These results are put into stark relief by the likes of the HP Pavilion dv6750ea that managed three hours in the Productivity test and nearly two in DVD playback. This is far more like what we expect from a notebook these days and given the more portable credentials of the R410, its lack of longevity is disappointing.

Its raw performance is a little more promising. Despite failing to produce results in some tests, its marginally faster CPU meant it bested both the R60 Plus and HP dv6750ea. In practice, however, you’d be hard pressed to tell the difference, though the ATI integrated graphics might mean you can play undemanding games at slightly higher settings than on Intel’s current integrated graphics.


In some ways, though, the R410 feels like a missed opportunity. It’s not a bad machine by any stretch of the imagination. It’s smart, classy and comparatively portable but it’s crippled by poor battery life, a fact that negates the advantage of being smaller in the first place. Consequently, you could easily opt for a 15.4in model, like the Dell Inspiron 1525 or HP Pavilion dv6750ea that has more features, better battery life and costs more or less the same. 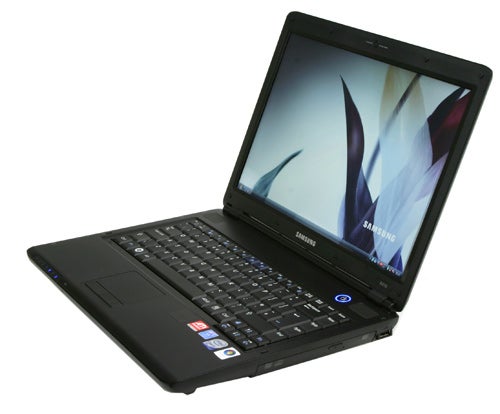 
An attractive, good value and well put together notebook with a large hard drive. However, the R410 is let down by battery life that doesn’t match its more portable ambitions. It’s a good option for those trading up from very basic older notebooks, but it could have been a lot more. 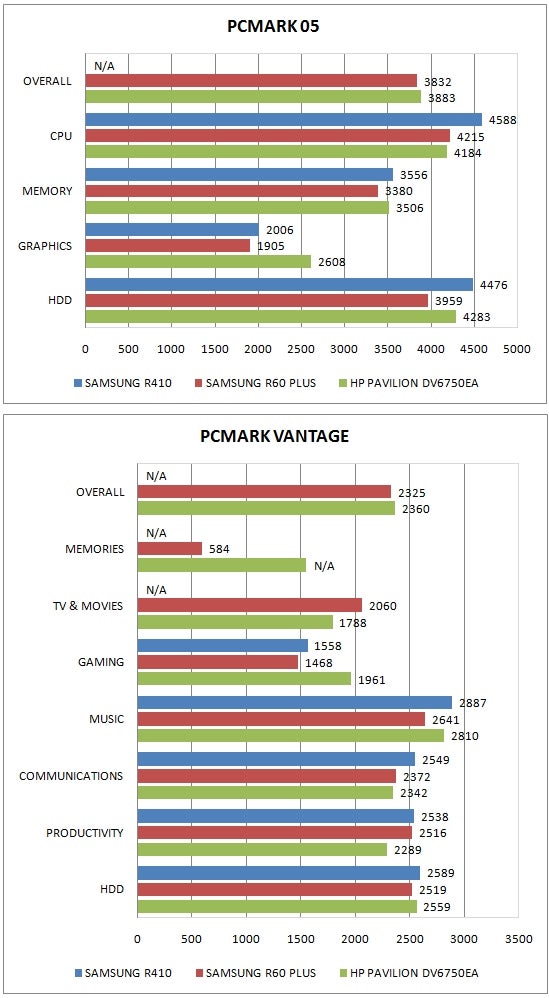 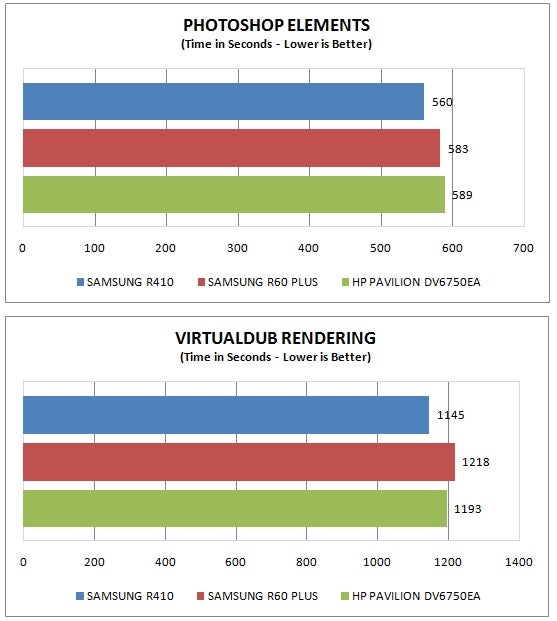 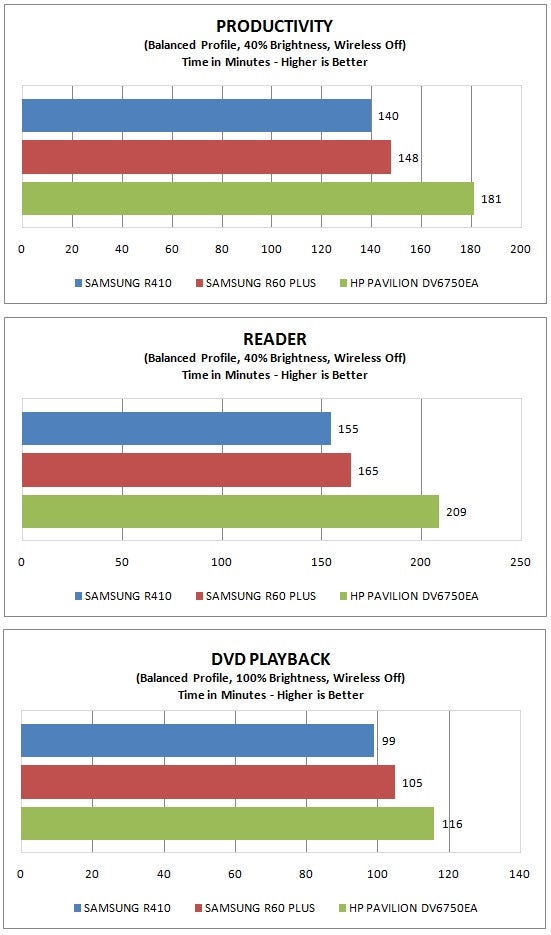