Hey PC, what are you doing tonight?


Well, I’m having the latest version of Microsoft Office installed, a fancy new printer hooked up and I’m going to play a whole bunch of games. How about you, Mac?


Erm… well I cost nearly twice as much as you, so now my owner can’t afford any of that stuff sooooo…. I’m just going to browse the net and check email. 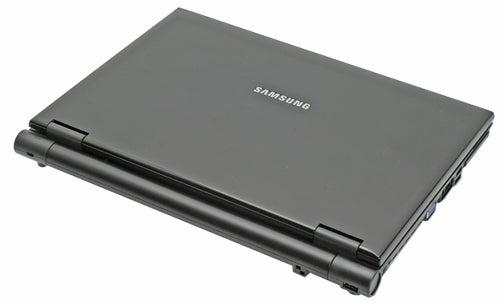 You, see it’s all very well harping on about how fantastic the Mac is, and don’t get me wrong I think they’re great, but when it comes down to it, price counts for a lot. This Samsung R20 is a case in point – it does the classic PC job of offering a lot more for your money than an equivalent Mac. This is particularly relevant as in designing the R20, the first of its notebooks to appear under its new Aura branding, Samsung is clearly gunning for the black MacBook.


The key talking point is the lid, which, though it doesn’t really come across in our picture, is piano key smooth, shiny and very impressive.

While this is great, it means that when you open up the notebook you’re rather brought down to earth with a bump. The finish and design really doesn’t manage to hide the fact that this is a budget piece of hardware making the lid seem as if it actually comes from a different notebook altogether.


Before I go into the notebook in detail though, it’s worth talking about the spec – a T2250 Core Duo CPU with 2MB of cache, backed up with 1GB of RAM. There’s a massive (for a notebook) 160GB hard disk drive, and a dual-layer DVD burner. The presence of a Core Duo, rather than the newer Core 2 Duo might make some people stop but in fact for Core 2 Duo’s that don’t have 4MB of cache, there’s not much difference to the previous generation. A feature that Core 2 Duo does have is hardware support for virtualisation but if you need this, you have to set your sights higher than a £600 notebook.

The spec is impressive for the price. The Toshiba Satellite U200 that we looked at last month cost more but sported a lower clocked CPU, half the RAM, a much smaller hard disk and slower integrated graphics. The latter is quite significant as the R20 is running the RS600, the new chipset from ATI featuring integrated X1250 graphics, which is said to be appreciably quicker than anything you can get right now from Intel. We’ll see.

Moving back to the look and feel of the notebook, opening it up reveals a 14.1in display with a 1,280 x 800 resolution. The quality of the screen is only reasonable, not outstanding, with noticeable colour shift when you move to the left and right and up and down. It’s not the brightest or sharpest I’ve seen either. What’s most surprising it’s what’s beneath it. In a strip running above the keyboard is a curious design consisting of circles and curves – others in the office commented that it looked like Artex. Personally I think is looks rather daft but it does at least prevent the notebook from looking too bland. 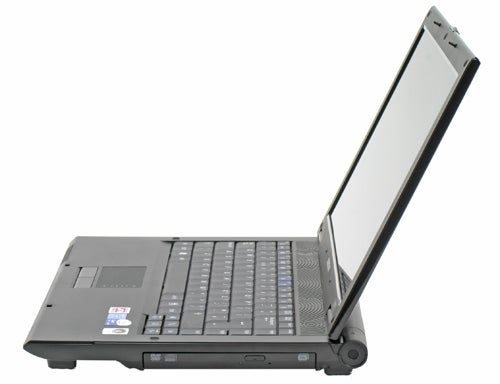 There are two buttons in this area – one for power and one that launches Samsung’s AV Station Now software. This is essentially Samsung’s own basic version of Windows Media Center, but it feels a little redundant considering that MCE is preinstalled on Premium and Ultimate versions of Windows Vista, the former being installed on the R20. It does launch much quicker than MCE however, so that might be reason enough to have it here. Either way, there’s no remote included or TV Tuner.


Moving down, I was very impressed with the keyboard. It seems that even budget notebooks have decent keyboards these days, which wasn’t the case several years ago. The keys are very firm but springy too, so you can quickly get a quick typing speed up. Pleasingly there are no strangely shaped or oddly placed keys, though I’m not too sure why the F7 and F8 keys are coloured blue when all the others are black. Function/F8 lets you switch between power profiles, giving you Silent, Normal and Speed. Usefully there is a Function key on the right hand side of the keyboard. 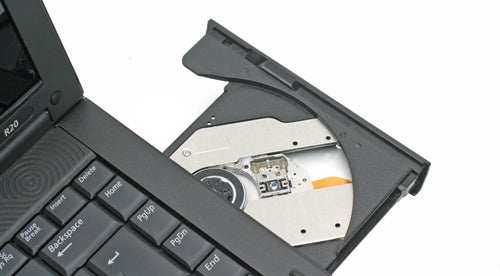 The trackpad and the mouse buttons beneath are perhaps the cheapest looking part of the notebook. The buttons are the same piano black as the lid, but as a design motif it doesn’t really work. If it had been repeated in other areas it might well have had more impact. They do the job though and the scroll area on the right hand side of the trackpad is handy.


Connectivity wise you’ll find that there’s only two USB ports on the right hand side, which could be a little limiting. There’s an Express card slot which gives you future proofing and we’re starting to see 3G data cards in that form factor, which is good. I couldn’t help but be disappointed that the Ethernet was limited to 100Mbps speeds and not Gigabit. However, it’s clearly not cost effective enough to release it at this price level. Next along you’ll find a VGA output, useful for presentations and you’ll also find a modem socket. 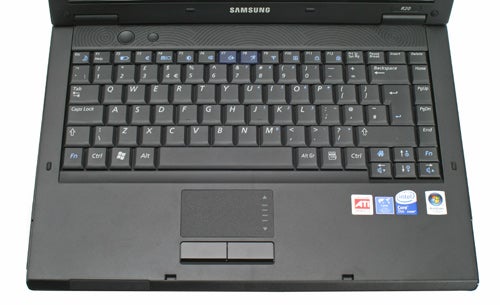 A the front of the notebook you’ll find a line of lights for power, Scroll, Caps and Num Lock and an indicator for the Wi-Fi, which can be activated easily via the Function key and F9. Bluetooth isn’t present however on this model, which is a bit of a shame.


Unfortunately, our MobileMark battery life run down test doesn’t operate under Vista but it’s fair to say that you’ll struggle to get to two and half hours of battery life with this notebook. There is a battery power level indicator on the underside at least, which is a nice touch. 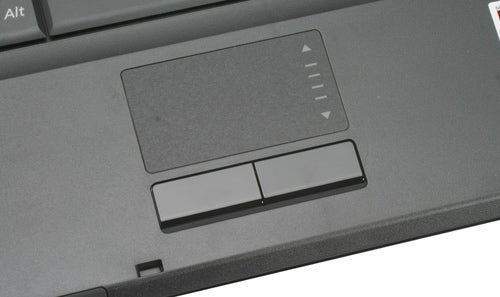 Performance was pretty decent though. Though it has twice the memory of Toshiba’s U200 it actually gets a slightly worse memory score in PC Mark 05, indicating how much more demanding running Windows Vista is. Overall though, it does a lot better, thanks to superior hard disk and graphics performance. The fact that it is Core Duo compared to a Core 2 Duo in the Toshiba doesn’t seem to have hurt it, particularly because it’s clocked slightly higher.

Overall it’s a better machine than the Toshiba, being faster, better looking and cheaper. Sounds like a date. There are aspects I don’t care for and sacrifices have been made for the price, namely lack of Gigabit Ethernet and Bluetooth, while the screen is not the most impressive I’ve seen. However, there’s no doubting the value. This is only emphasised further when you compare to something like a similarly specced Macbook, which would cost you over a grand. Sure the Macbook is a more desirable machine, but is it really worth nearly twice this machine?


Samsung has managed to offer a budget notebook that doesn’t actually look like a budget notebook, at least when the lid is closed. The screen is only adequate but the basics are all there, such as an excellent keyboard. If you’re on a budget and want your notebook to look good and perform well, this is a solid choice. 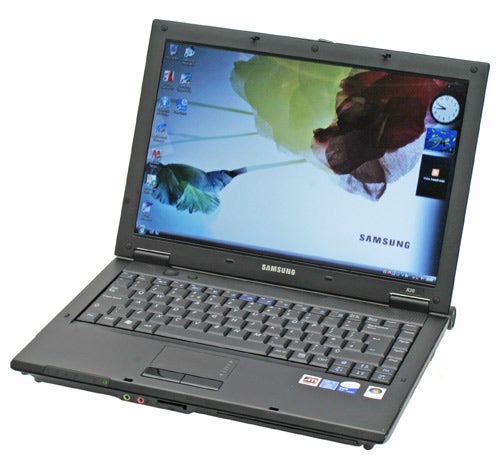