From the outset it was clear what Samsung was getting at with its Aura branding for notebooks. It was back in the February that we first reported on their existence, and even then the similarities in price, specification and design pointed toward an Apple shaped inspiration. When the R20, the first of the Aura notebooks, arrived in the office our suspicions were verified, and it went on to earn itself a well deserved Recommended award.


Last week I looked at another of the Aura branded notebooks, the Q45. As the successor to the superb Q35 it had a lot of live up to, but live up it did; once again proving that Samsung knows how to make a superb portable notebook at a criminally low price. Today I’m looking at another of the Q range, the slightly larger and more expensive Q70. 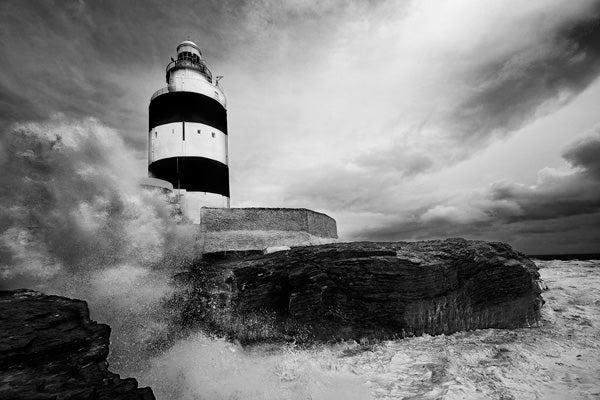 Interestingly, of all the Aura branded notebooks we’ve seen so far the Q70 is probably the most natural Apple competitor. With its 13.3in display, and 2.03kg weight, it sits directly in MacBook territory and since Apple has switched to Intel it shares a fair amount of internal characteristics too.


Our sample came complete with an Intel Core 2 Duo T7300, this is one of the new Santa Rosa processors and sports a clock speed of 2.0GHz, 2MB L2 Cache and an 800MHz front-side bus. This is supported by 2GB 667MHz DRR2 RAM, a 160GB 5,400rpm SATA hard drive and an nVidia 8400M GS with 128 MB of dedicated memory. Sound is provided by Realtek, and as with the Q45 the system is based on the Intel 965PM chipset and runs Windows Vista Home Premium. 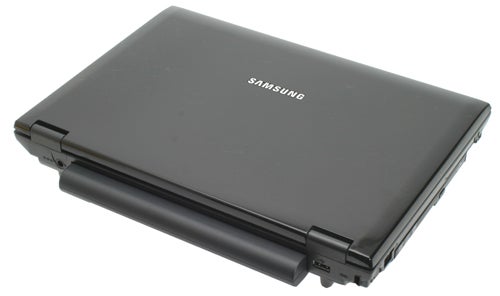 You also get a DVD Super Multi drive with Lightscribe support, while connectivity includes 10/100 Ethernet, 3945ABG Wi-Fi and Bluetooth 2.0 EDR. As with the Q45 it’s disappointing to not get either Gigabit Ethernet or Draft N wireless, and given that the Q70 is a little more expensive at £900, the disappointment is all the more acute.


However this price still makes the Q70 good value for money, just not to the degree of the Q45 and though the Q70 provides a larger hard drive and more RAM comparative to a MacBook, all the new MacBooks come with Draft N wireless and Gigabit Ethernet. As ever there’s a balance to be had, one only an individual can decide upon. You’ll get better performance and a more generous spec with the Q70, but with the MacBook you get the things I’ve already mentioned and OSX. Obviously you pay a premium for buying into the Apple brand, but that’s just how things are.

Aesthetically, one can again see that the Q70 shares the same basic chassis as the Q45; all the connections are identically arranged and it shares an identical keyboard to boot. Unfortunately, this means that it also has the Fn key to the left of the Ctrl key; to my mind and others this is the wrong way around and it would be appreciated if Samsung would take note. 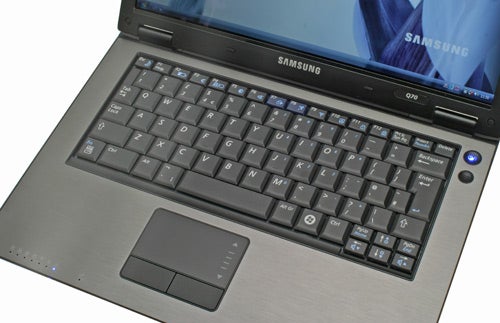 That doesn’t mean there aren’t some differences, with Samsung adding a very smart graphite coloured brushed aluminium finish to the inside of the notebook. It certainly adds a sense of class and quality to the Q70, and it provides a nice counter balance to the more eye-catching shiny black exterior.


Another small difference between this and the Q45 is the lack of a web cam. Considering this is the more expensive of the two I’d expect the Q70 to at least match the Q45 in this regard, thus it seems like something of an oversight. 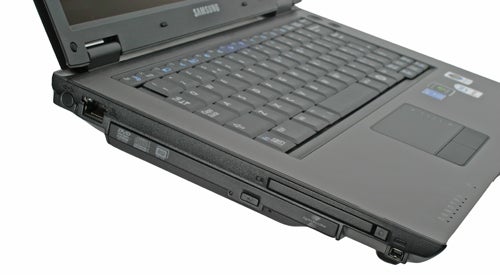 Connection wise on the left you’ll find the Ethernet port, Type II PC Card and a 4-pin FireWire port along with the optical drive. The front features a combined Headphone and S/PDIF socket, a Mic socket and a memory card reader. All the usual formats are supported, including MemoryStick, MemoryStick Pro, SD, MMC, MMC Plus and xD.


One of the few differences can be seen on the right edge, where the modem, D-Sub and USB ports that were exposed on the Q45, are covered by a small plastic flap. This helps tidy up the look of the exterior edge, but it can be a little annoying to open every time you want to use one of the ports – especially considering the only other USB port is on the back of the unit. 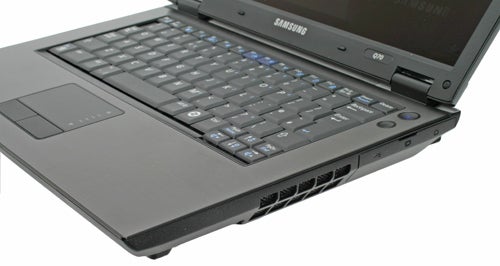 Once again Samsung has furnished the Q70 with an excellent display. A native resolution of 1,280 x 800 is fairly par for the course these days, as is the high contrast glossy finish. It’s noticeable that the back light bleeding evident on the Q45 is much less pronounced on the Q70, and the viewing angles are improved too. However, if anything the black levels aren’t quite as deep as on the Q45, though they’re still very good and the display produces crisp clean text, nice colours and a generally good contrast level.

In the performance stakes the Q70 is also very competent. In PC Mark 05 it sits comfortably between the Q45 and the Acer Aspire 5920, which considering it’s a smaller chassis is quite impressive. It should be able to handle pretty much anything you throw at it, beyond the most demanding gaming titles that is, but even then the 8400M GS does provide some gaming performance and will be able to handle the likes of WoW or a similarly undemanding game, the name of which I refuse to use in this review.


The Q70 managed 2 hours and 40 minutes, which is okay but is fair way off the 3 hours and 20 minutes managed by the Q45. As ever one will get more by tweaking the settings, but there’s a noticeable gulf in longevity and this is always an important factor. 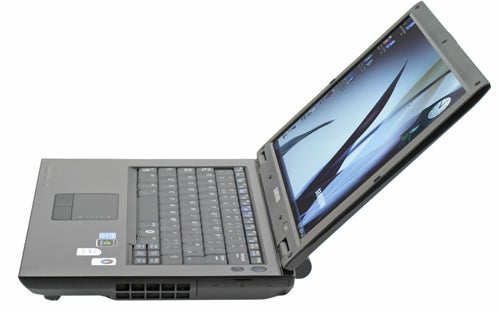 This also gets to the nub of what I see as the main problem of the Q70, that it defies qualification. It’s not an ultra-portable, and doesn’t quite have the grunt of a desktop replacement. It’s not as light as the Q45, and is also noticeably thicker measuring 39.2mm compared to the Q45s 36.3mm. Moreover that makes the Q70 a good deal bulkier than the 27.5mm of the MacBook, and even given the Q70 being lighter there is something to be said for having a balance to between weight and thickness.


Ultimately, it does leave you wondering why you’d choose a 13.3in notebook over a smaller 12.1 which has more or less the same features but is lighter and more portable. Average battery performance also counts against it, and as with any notebook – especially one that’s meant to be portable – this is a vital factor. Moreover the Q45 will be available with a similar specification in the future, so you could spec a faster CPU if you so desired.


Overall the Q70 is another sleek and attractive notebook from Samsung. The shiny black exterior provides the initial eye-catching element, and the metallic internal finish provides a very different but no less attractive effect. General performance is excellent, while the nVidia 8400M GS provides some limited gaming performance for those who require it.


If anything, though, the Q70 isn’t quite as compelling an option as the super cheap and more portable Q45, while with the likes of the newly announced Dell XPS M1330 may make the Q70 look a little less attractive in the near future. If you definitely prefer a 13.3in screen rather than the smaller 12.1 variety then the Q70 is still a very good option, but it’s worth looking around before settling on it.