When I reviewed the Samsung Q30 back in January 2005 I decided that it was a great ultra-portable notebook, but the lack of PC Card slot concerned me. Plus, the fact that the Q30 doesn’t have an optical drive is a definite issue these days, with machines like the Sony VAIO TX2XP sporting a DVD writer while remaining feather light and wafer thin. I was therefore very pleased when the Samsung Q35 landed on my desk and addressed both those issues. 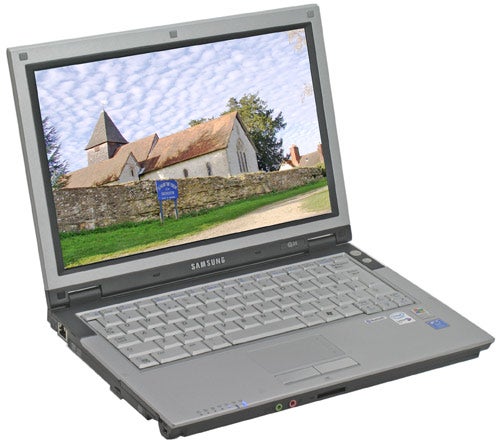 To be honest the Q35 isn’t exactly a natural replacement for the Q30, since it weighs over a kilo more than its older sibling. Of course I’m not suggesting that 1.89kg is heavy for a notebook, but when you consider that the Q30 only weighed 822g, almost any other notebook seems portly by comparison. But with dimensions of 299 x 214 x 35mm (WxDxH) the Q35 is still pretty damn small by anyone’s standards.


Like most Samsung notebooks I’ve looked at, the Q35 is finished in matt silver and it looks pretty good. There is a rumour of a gloss red version of the Q35 appearing though, something that the company did with the Q30 as well. Opening up the lid reveals a 12.1in widescreen display, complete with high-contrast glossy coating. With a screen resolution of 1,280 x 800, you’re getting a decent amount of desktop real estate considering the physical size.

In use the screen is very bright, with vivid colours making it ideal for watching the odd movie on a plane or in your hotel room. That’s not to say that the screen isn’t good for general application work, because it is. However, as I always mention, some people just don’t get on with these glossy screens, especially where there are multiple light sources around you. Of course if you don’t like high contrast screens on notebooks, you’re going to have to get used to them, because the majority of notebooks I see these days have them. It’s a good thing that I like them then.


Despite the small dimensions, the keybaord is very good. I’ve stopped being surprised at ultra-mobile notebooks having good keyboards because all the major players seem to have cracked this issue. Sony, Fujitsu-Siemens and now Samsung have all managed to squeeze good quality keyboards into the slimmest chassis. The keys aren’t too small, and there’s a good amount of travel, with a solid break. What’s really impressive is that there wasn’t the slightest hint of flex no matter how hard or fast I typed. 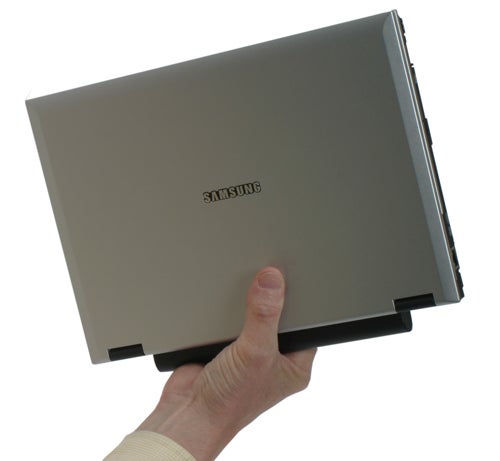 Samsung should be congratulated for making sure that the right keys are treated to a bit of extra size. The Caps Lock, Shift, Return and Backspace keys are all large, and while the Fn key is in the bottom left corner where the Ctrl key should be, at least Samsung has made the Ctrl key large to make it easy to hit. 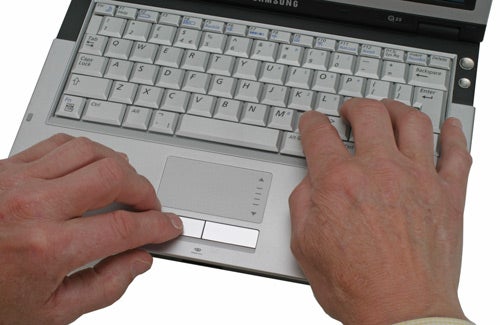 Below the keyboard is a touchpad, with two brushed silver buttons below it. The touchpad has a widescreen aspect ratio to match the screen, while you can scroll vertically through documents and web pages using the right hand side. It’s good to see that Samsung has actually marked the right side of the touchpad to indicate the scrolling area, something that few notebook manufacturers seem to do.


To the right of the keyboard are two round, silver buttons – one for power and one for Samsung’s AV Now media playing environment. There’s no programmable soft keys that have become popular on notebooks these days, but I rarely use shortcut buttons, so I can’t say that I’ll miss them. 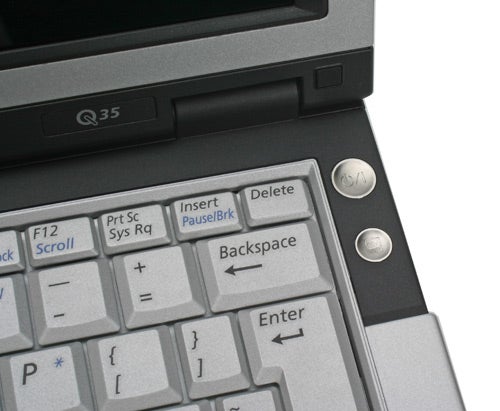 When it comes to specification the Q35 doesn’t disappoint. Unlike Sony’s TX2XP, Samsung has equipped the Q35 with a dual core Intel Core Duo CPU. My review sample had a T2300 1.66GHz CPU and an 80GB hard disk, but Samsung has informed me that this model has now been upgraded so you’ll get a T2400 1.83GHz chip and a 100GB hard disk for the same price. There’s a decent complement of memory with 1.25GB on offer – the reason for this rather odd total is that the motherboard has 256MB hard wired to it, and Samsung has augmented this with a 1GB SODIMM. The Intel integrated graphics take a small amount of system memory, so having that extra 256MB is quite handy. 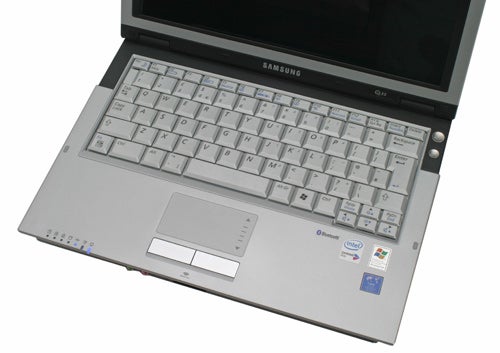 You’ll have no problem getting connected with the Q35. There’s an Intel PRO/Wireless 3945ABG wireless adapter, giving you the option of connecting to 802.11a, b or g networks. There’s also built-in Bluetooth in case you want to get online via your mobile phone, while the inclusion of a PC Card slot means that you can use a 3G Data Card if you wish. Wired connectivity comes in the shape of a 56k modem and a 10/100 Ethernet port. I would have liked to have seen Gigabit Ethernet, but complaining about that really would be nit picking.

On the right of the chassis there’s a D-SUB port for hooking up an external monitor, a modem socket and a USB 2.0 port. At the front there are headphone and microphone sockets, with the headphone socket doubling up as an optical S/PDIF. There’s also a memory card reader at the front which supports MemoryStick, MemoryStick Pro, SD, MMC and xD cards, although strangely it’s only labelled MemoryStick. 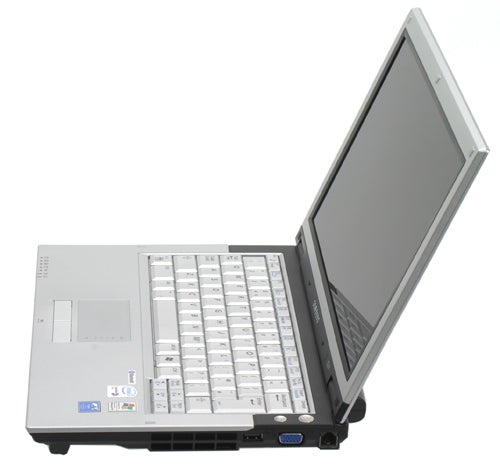 The left is dominated by the DVD writer which is a super-multi drive supporting DVD-R/RW, DVD+R/RW, DVD+R DL, DVD-RAM, CD-R and CD-RW. Only DVD-R DL is missing from its reportoire, but with a lot of drives that’s just a firmware flash away.


Also on the left is a four-pin FireWire port, an Ethernet port and a Type II PC Card slot. The protruding battery takes up most of the rear, but there’s also a second USB 2.0 port and the power socket squeezed either side of it.


Performance wise the Q35 gave a pretty good account of itself. The SYSmark 2002 score of 265 is pretty impressive for a notebook this size – that’s almost 100 points faster than the Sony VAIO TX2XP which had a single core, ultra-low voltage Pentium M chip, and 57 points behind the Sony VAIO SZ1VP which was equipped with a 2GHz Core Duo. 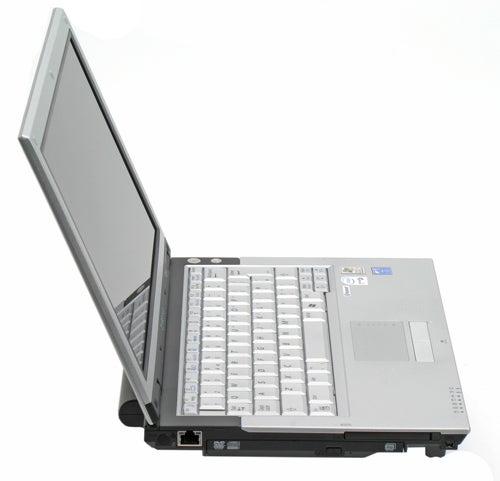 The Q35 sits between Sony’s two ultra-portable machines when it comes to Mobile Mark too. If there was one area that the Sony SZ1VP wasn’t completely convincing, it was battery life, but the Q35 suffers no such issues. Running the Mobile Mark productivity test, the Q35 turned in a very impressive result of five hours 39 minutes battery life – giving it well over an hour more than the SZ1VP. Strangely though, the Q35 lagged behind the SZ1VP when it came to DVD playback, although only by six minutes.


You’re usually expected to pay big bucks for a thin and light notebook with cutting great components, but Samsung has decided to buck this trend. Amazingly, the Q35 will set you back less than £1,000 including VAT! This price of £993.90 is even more impressive when you consider that you’ll be getting the upgraded version of the Q35 if you choose to buy one, and you can expect the faster CPU to improve performance markedly.


The Samsung Q35 ticks pretty much all the boxes when it comes to ultra-mobile computing. It’s small, light, stylish and is packed with cutting edge features to keep even heavy duty users happy. The dual core CPU, super-multi DVD writer and well above average battery life combine to make the Q35 a very tempting prospect. But when you throw the attractive price into the equation, it’s impossible not to recommend this notebook.