Samsung has a good track record where portable laptops are concerned. You can track this all the way back to the Q35 (one of which still knocks around the TrustedReviews offices even now), its successor, the Q45, as well as last year’s two efforts the Q210 and Q310. All excellent laptops and most significantly they were affordable, something that can’t often be said of machines below the 2.0kg mark. Curiously, the advent of the netbook might have made this reputation less prestigious, but Samsung hasn’t missed the boat there either – its excellent NC10 set the benchmark for netbooks as far as we’re concerned.


However, while many seem preoccupied with netbooks, nothing can beat a proper notebook PC as far as power to weight ratio is concerned and the Q320 is Samsung’s latest effort. Based, as seems the fashion these days, on a 16:9 ratio display (13.4in in this instance) it continues Samsung’s reputation for affordability, cramming a comprehensive specification into its £650 price point of our review model, the NP-Q320-AS02UK. 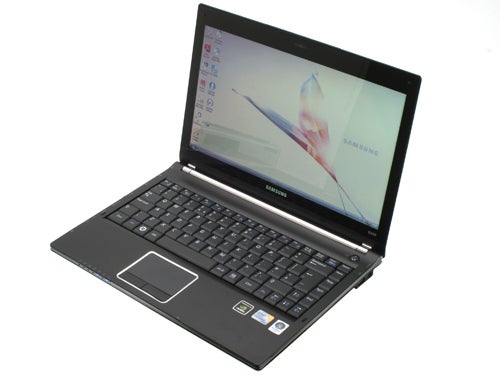 For this money you get an Intel Core 2 Duo T6400, which runs at 2.0GHz, has 2MB L2 Cache and runs on an 800MHz front-side bus. This isn’t a Centrino 2 processor, so isn’t the latest of Intel’s mobile offerings, but it should offer enough processing punch for most needs. This is backed by 3GB DDR2 RAM and a 320GB hard drive, so the Q320 isn’t lacking for system memory or physical storage, either.

Unlike many notebooks in this form-factor you also get discrete graphics courtesy of an nVidia G105M with 256MB dedicated memory. Like the CPU this is no speed demon, but it offers just enough to run older games fairly comfortably, as proved by the solid 34.1 frames per second produced in ”Trackmania Nations” with detail set to Medium. In addition to all this you get both Draft-N Wi-Fi and Bluetooth 2.0, as well as Gigabit Ethernet for wired networking. Throw in a few other sundries such as a 1.3-megapixel webcam and you’ve got a system that offers all the features a typical user might need.

This includes decent connectivity. There are three USB ports in total, one of which also doubles as an eSATA port and another that remains powered when the machine is turned off – something that’s ideal for charging mobile phones and the like. You get both HDMI and VGA video outputs, headphone (line-out) and microphone (line-in) jacks for audio, while a 34mm ExpressCard slot adds support for additional peripherals. A 3-in-1 memory card reader on the front supports SD, SDHC and MMC formats. Handily, all these ports are labelled on the main body of the machine. In a new departure for Samsung, the Q320 also features a slot-loading 8x DVD-Rewriter drive, though it’s worth remembering it doesn’t support (albeit rare) non-standard size disks.

There’s little in the way of accessories in the box, with just a cleaning cloth and a software/driver CD supplied. No real attempt has been made to condense the power adapter, either. Measuring 123 x 29mm it weighs 270g alone, but combined with the attached wire and mains plug connection, you’re looking at an extra 570g in your bag.

Compared to the Q310, the Q320 is quite a departure in terms of design and a positive one at that. While it was hard to quibble with the build or layout of the Q310, Samsung’s ‘touch of colour’ design and fondness for glossy black plastic proved polarising. But, like with the R522 we reviewed recently, the Q320 abandons this approach in favour of simpler and more durable materials. 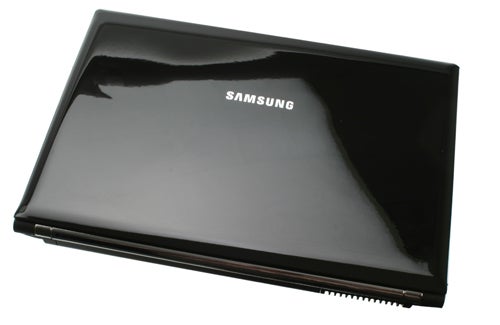 Glossy black remains on the lid, mind you, but inside the body of the machine is smooth matte black, punctured by the neat use of faux-chrome along the hinge section and around the touchpad. Combined with the frameless screen (another first for Samsung) and slim silver trim on the front and sides, the Q320 instantly impresses with its simplicity and class. It’s also a very well put together machine, with every element feeling taut and secure and no obvious signs of structural weakness.


This leaves our only real complaint, in terms of design, being the relative thickness and heft of the Q320. At a maximum 36mm thick and 2.18kg in weight this isn’t the lightest or slimmest machine in its class, though we wouldn’t class it as heavy, either. All we’d really ask is that it were just a few hundred grams lighter, pushing it under the 2kg threshold. 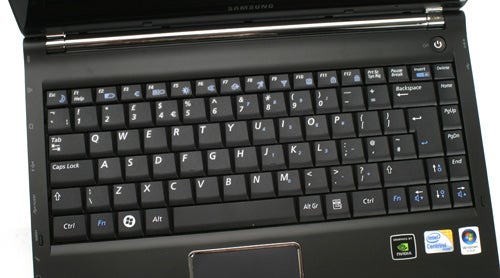 No complaints can be made of the keyboard or touchpad, though – a crisp response and faultless layout results in fast and error-free typing, while the touchpad is nicely proportioned and serviced by two satisfyingly positive buttons. One thing we would highlight, though, is the lack of a dedicated button for ejecting the optical drive, with this mapped as a secondary function to the ‘Insert’ key. It’s not a biggie, but it seems a tad stingy and is less than convenient.


Another reasonable and habitual complaint could be made of the screen resolution which, due to the 16:9 ratio, is 1,366 x 768 and thus features fewer vertical pixels than most will have become used to. In most other respects, though, the Q320’s display is very good. It’s LED backlit, so is very bright, while horizontal viewing angles are superior to those found on the Acer Aspire Timeline 4810T. Colour fidelity and grey-scale production are also good, though boosted by a significant amount of dithering (where processing is employed to make extra shades) that results in some banding in gradients. Very small text (i.e. 6.8 Arial) could also be a tad sharper, but motion is relatively smooth and tearing free. 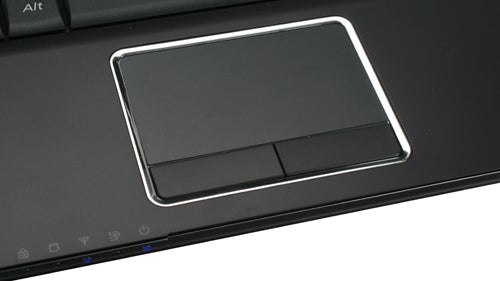 Less positive things can be said of the speakers. Hidden beneath the front of the machine, they’re passable for watching video clips, but for anything else a set of decent speakers or headphones are essential. Volume is okay, but there’s a complete lack of bass and depth to the sound that’s punctuated by sterile mid-tones and harsh treble.

For our performance benchmarks we compared the Q320 against the outgoing Q310 and the similarly specified Toshiba Satellite U400-189 we looked at recently. All are 13in machines of some variety, so make for natural comparisons. Until recently the Q310 was available for around the same price as the Q320, but in most instances (where stock is available) it’s retailing for £100 or so more than the Q320 now. 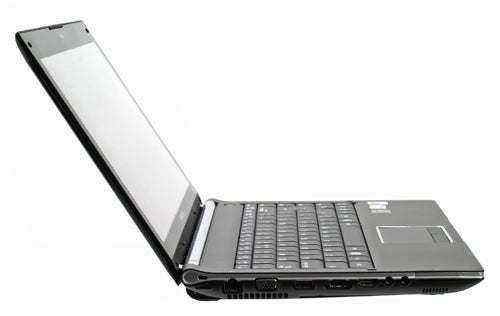 This price differential is logical given the slight performance superiority the Q310 enjoys over the Q320. This is due to it featuring a faster Centrino 2 spec processor, though the Q320 still puts in a creditable performance. Unless you need oodles of processing overhead there’s little cause for complaint.


It also manages to outperform the Toshiba, which has the same processor and complement of RAM. This is due to the Q320’s discrete graphics, which gives it a significant edge in the Gaming segment as well as the TV & Movies tests, where it benefits from nVidia’s video processing engine. It also outperforms the Q310 here due to its video engine being a newer version than that of the nVidia 9300M powered Q310. In reality, though, the difference is pretty negligible. 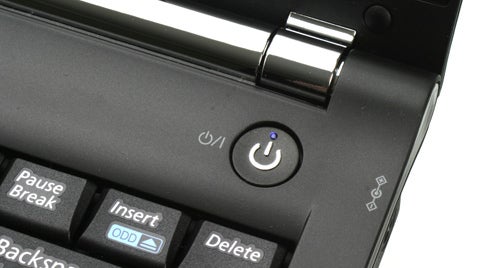 Just as important, if not more so, than raw performance is battery life and the Q320 is strong here, too. Though it’s beaten by the Q310 by 20 or 30 minutes in the Productivity and Reader tests, its six-cell 4,400mAh battery (which has a handy battery meter) still delivers over three and half hours and four hours respectively. This puts the Q320 comfortably ahead of the Toshiba, and other than the likes of the Acer Aspire Timeline 4810T, whose £100 premium and significantly slower processor put it in a different class, there are few notebooks at or around this price that can match the Q320. This said, if you’re less concerned with performance and more with battery life, the 4810T does provide a tempting alternative provided you can find the extra cash. Failing that you can always expense it! 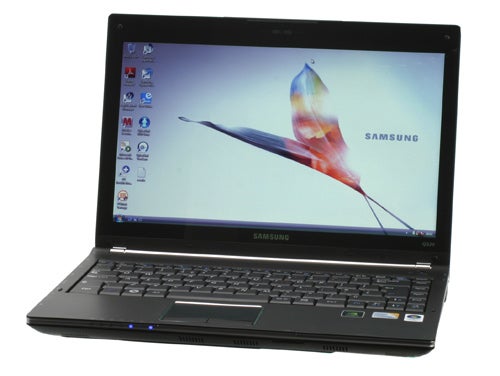 
This is a well considered and classy step-forward from its predecessor. While the Q310 was overly flashy and slightly gaudy, the Q320 is more restrained and offers a look and feel that surpasses its affordable price. This view can be applied to its feature set and performance as well, making this a stonking bargain that’s perfect for anyone who needs a little portability without sacrificing performance.

(centre)”’For general use, the Q320 will cope no problem. Its discrete graphics gives it a modicum of gaming performance too”’(/centre)

(centre)”’Just over three and a half hours of battery life is an excellent result for any notebook, but outstanding for a notebook of this price”’(/centre)