Samsung has long been the purveyor of excellent portable laptops. Its Q35 and latterly the Q45 were great little machines and were often priced very competitively as well. More recently, however, the Q45 was starting to show its age since, short of a new lick of paint, it hadn’t seen a meaningful chassis overhaul since the original Q35 that we reviewed all the way back in June 2006. It’s all change now, though, as the Q45 makes way for the Q210 and Santa Rosa for Montevina, Intel’s new mobile platform that’s known to you as Centrino 2.


Centrino 2 brings with it a completely new chipset with improved integrated graphics, better power management and a new range of processors. We’ll get into the details of this new platform a little later, but first let’s take a closer look at the shiny veneer that houses it all. 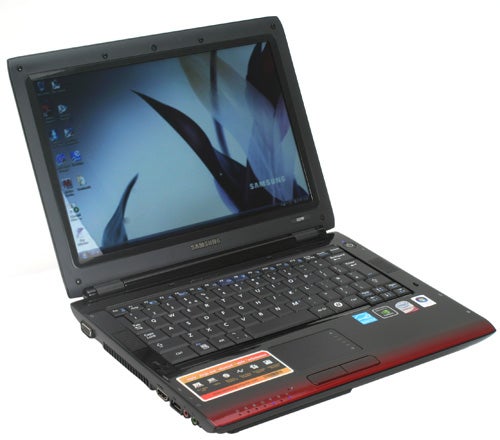 On the outside its classic Samsung: glossy and black. This introduces all the usual issues such as fingerprints and scratches but, as with the R410, the Q210 is more durable than previous machines thanks to a new coating. This doesn’t make it impenetrable, this is no ToughBook, but the glossy finish on the Q210 is appreciably more durable than on previous models.


Inside things have changed quite a bit and not necessarily for the better. Carrying over its ‘touch of colour’ theme from TVs and monitors, the Q210 features its own deep red ‘touch of colour’ along the front edge. Samsung has also decided to extend the use of glossy black plastic inside and around the keyboard, too. Unfortunately, to our eyes at least, this effect isn’t anywhere as attractive on the Q210 as it is on the TVs. It’s not ugly per se, just underwhelming and less subtle than the rose tinted bezels of the TVs. 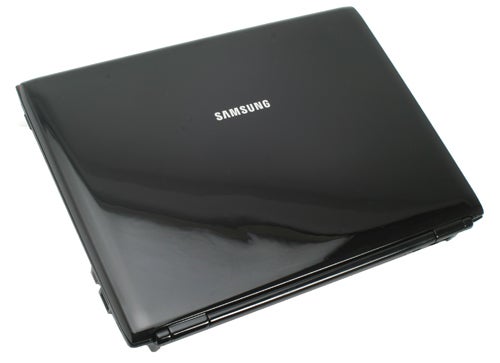 Moreover, knowing that glossy black finishes spoil easily, it’s not the best thing to have around the one part of the notebook you’re constantly touching. Even after relatively light usage the Q210 begins to look rather grubby and greasy and makes regular use of the provided cloth a necessity. Overall, the jury is very much out on both the touch of colour and glossy internal finish. Some will like it, but we’re not so convinced.


Moving onto more subtle differences, the Q210 is also marginally wider and deeper than the Q45 it replaces. This is largely because the battery now sits flush with the system rather than protruding from the rear, as it did on the Q45. This arrangement is definitely preferable, so the extra size is perfectly acceptable. 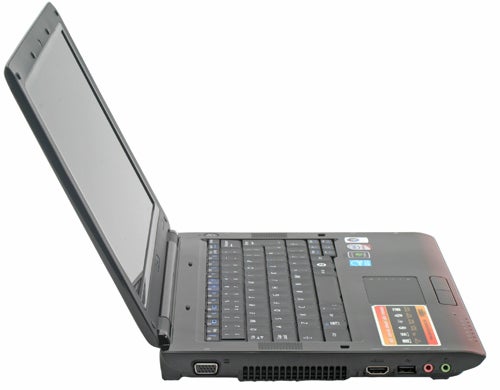 Thankfully, this extra size hasn’t had too noticeable an effect on the overall weight of the Q210. Weighing just 1.95kg the Q210 isn’t the lightest notebook of its type, but less than two kilos is the ideal target for a machine of this size and anyone used to larger 15.4 or 14.1in machines will notice the difference straightaway.

Further changes can be seen in the keyboard, one area where the Q45 wasn’t as strong as it could have been. Samsung has finally corrected the placement of the Fn key, which now sits inside the left-Ctrl key rather than outside – hooray! This is a welcome change, but we’re not so keen on how it has placed the forward-slash key next to the right-Shift key, instead of on the left as it normally would be. When you start hitting that instead of the Shift key, you’ll understand why. 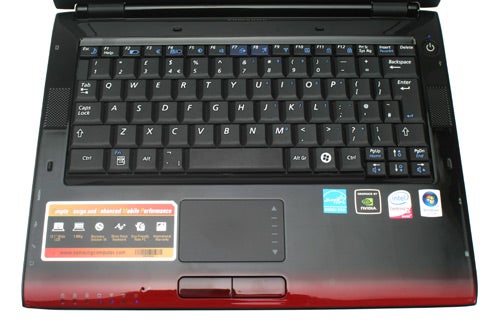 As for the keys themselves they’re good, but not outstanding. On the plus side keyboard flex is near non-existent and this reflects the overall build quality of the machine, which is exemplary. We did, however, find that the depth of travel and response wasn’t as positive as we’d like, proving a little shallow. Again, it’s not terrible and with a little use you’ll quickly get used to it and even begin to like the feel of the keyboard, but it doesn’t have that instant comfort we look for.


No such complaints can be made of the touchpad or its accompanying buttons. Both are nicely proportioned and positioned, never interfering with typing. There are both vertical and horizontal scroll zones, though oddly only the vertical one is marked on the touchpad itself.

Either side of the keyboard are the two integrated speakers. This marks another positive change from the Q45 that had them underneath the front edge, hardly an ideal place for speakers. This said you shouldn’t expect great sonic pleasures from the Q210. Volume levels are disappointingly low and even the speakers on an Eee PC 901 or Eee PC 1000 would best those on the Q210, though the Eee PC speakers are unusually good for their size.


Connection options have unequivocally improved. For instance, gone is the long since out dated PC Card slot in favour of a 34mm ExpressCard slot. There’s also one more USB port, three in total, and an HDMI connection joins VGA in the external video options. One touch we rather like is the labelling of ports around the edges. This makes it that much easier to find the port you want and unlike similar efforts from some manufacturers, the labels actually line up with the corresponding ports properly!

As is often the case with Samsung laptops the screen is a very good one. A native resolution of 1,280 x 800 is par for the course, but colour reproduction and brightness levels are good and the glossy “high contrast” coating on this model doesn’t appear as thick as on previous models. Backlight bleed is kept to an acceptable minimum and text is typically sharp at the sizes people are likely to use on a laptop. Viewing angles aren’t amazing, though this is less of an issue on this machine as they might be on a larger multimedia targeted notebook.

Having dealt with all the cosmetic changes, it’s now time to talk technology. There are currently two Q210 models on sale whose only core difference is the processor. We’re looking at the more expensive option, the NP-Q210-AS02UK, which retails from between £675 and £715 inc. VAT depending on where you look. A cheaper model, the NP-Q210-FSS0UK, uses an older 2.0GHz T5750 Core 2 Duo and has list prices ranging from £575 to £615. 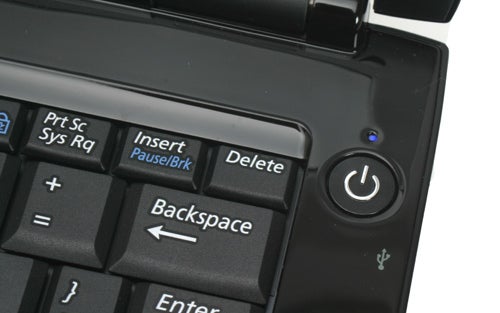 Our sample, however, features a new Intel Core 2 Duo P8400 CPU that runs at 2.26GHz with a 1,066MHz front side bus, up from 800MHz on previous generation machines, and with 3MB L2 Cache. It’s also part of a new range of medium voltage processors that feature a 25W TDP (Thermal Design Power) instead of the typical 35W. This is a potentially great development for smaller notebooks like the Q210, since it allows for superior battery life and thermal output without taking a significant hit on performance – for a full list of the new processors see: Intel Centrino 2 Mobile Platform Detailed.


Indeed, we found the Q210 did run quite cool. At idle the system registered a running temperature of 43 degrees Celsius, rising to a maximum of 60C during a prolonged stress test. These are quite acceptable levels and the Q210 remains comfortably cool on your lap, even when performing relatively taxing tasks.

You won’t be disappointed by the overall feature set, either. System memory totals an ample 3GBs and there’s a large 320GB 5400rpm SATA hard drive, more than enough for sizable music and video collections. There’s also the usual 8x DVD+/-RW optical drive, though LightScribe label burning is a nice added bonus. For graphics there’s an nVidia 9200M GS with 256MB of dedicated memory that’s just about good enough for casual gaming, but nothing more. 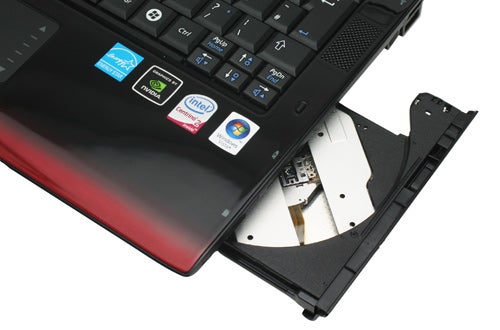 Network connectivity is strong. You get Gigabit Ethernet and there’s a still a standard modem for those that need it, but the highlight is the Wireless-N capable Intel Wi-Fi module. Though it has taken a while to come to fruition you can now expect to see all new Centrino 2 branded laptops to be Wireless-N compliant. Rounding things off is Bluetooth 2.0+ EDR for easy connectivity between other mobile devices.

So how does this new platform influence performance? Starting with PCMark Vantage, the Samsung Q210 puts in an excellent effort. It manages to match the Asus Lamborghini VX3, with its 2.4GHz T9300 Core 2 Duo, in pretty much every department and in some instances outperforms it. This is a good sign for the new P-Series of CPUs, since even the entry-level model holds its own in the performance stakes.


Things begin to look even better when we look at battery performance, though. In the Productivity segment of MobileMark 2007 it manages an impressive four hours and 28 minutes, an excellent overall result. Just under two and half hours in the high intensity DVD playback battery test is pretty decent, too, and though the Asus VX3 manages longer stints, it used a larger capacity eight-cell battery whereas the Q210 utilises a six-cell 5,200 mAh battery that makes it far more portable. 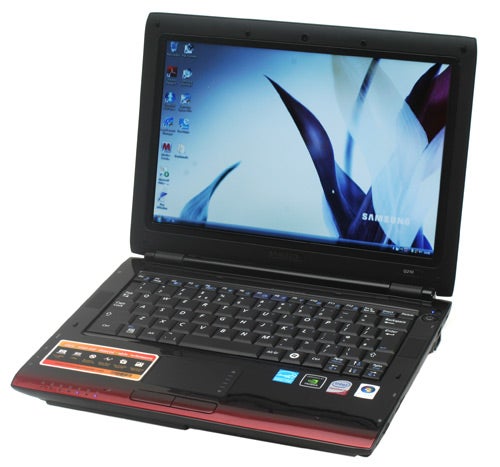 Overall, the performance of the Q210 is very good indeed. It strikes a nice balance between raw power and longevity and at around the £700 mark you’re not paying a fortune for this performance, either.


Despite some questionable design decisions, the Samsung Q210 continues Samsung’s legacy of well balanced and affordable portable laptops thanks to excellent battery life and application performance at a price that won’t break the bank. 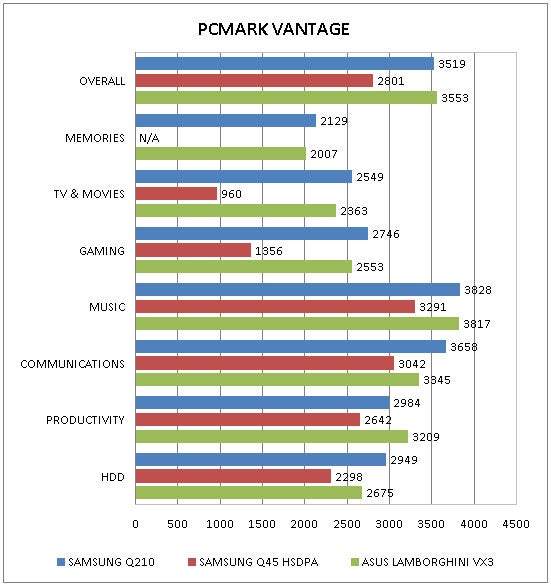 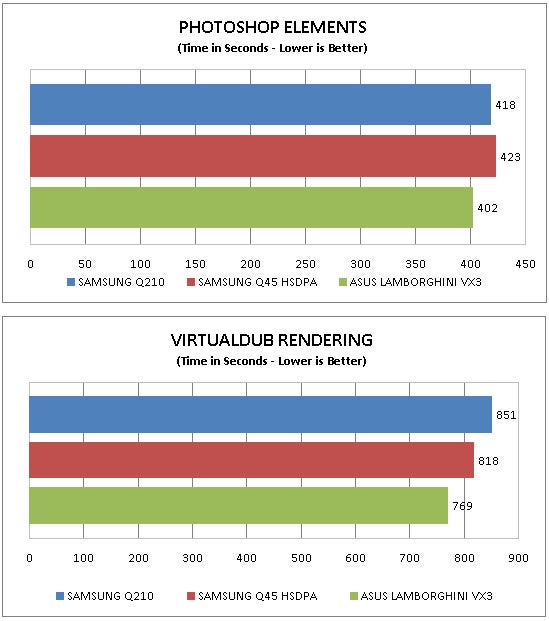 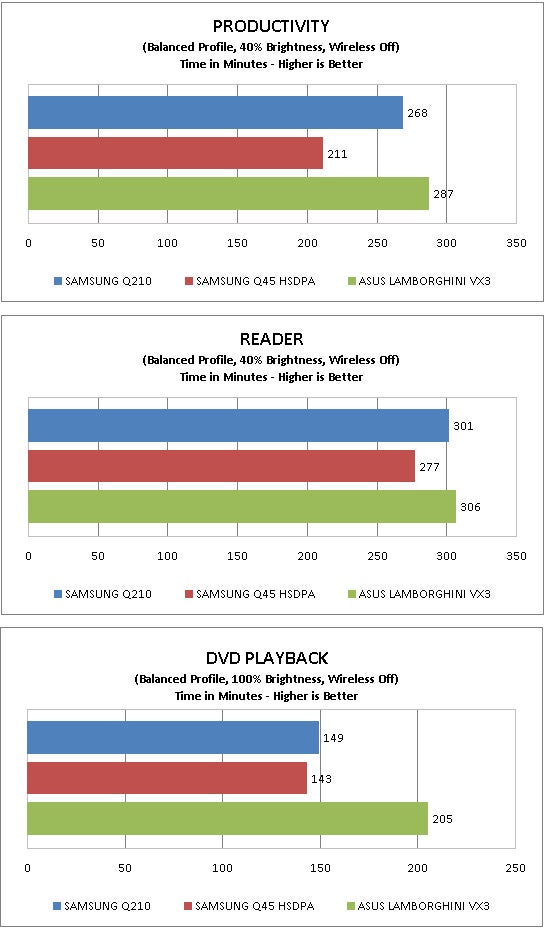