The rest of the AV industry must be royally sick of Samsung. It just keeps on delivering genuine quality at knock-down prices. And surprise surprise, the Korean giant is at it again today – with knobs on!


The product in question is the PS-50P96FD: a 50in plasma TV which, as ever with Samsung flat TVs, comes dressed to kill courtesy of a luxuriously glossy, jet-black bezel that oozes far more build quality than you’ve a right to expect for only fractionally north of £1500.


But that price becomes even more eye-catching – almost miraculous, in fact – when you add in the fact that the 50P96FD has a full HD resolution. For yes, Samsung has finally caught up with Pioneer and Panasonic and shrunk its plasma pixels sufficiently to fit 1,920 x 1,080 of them into a 50in screen. Crikey. If Samsung proves to have achieved this without compromising the impressive quality seen with its latest ‘normal’ HD Ready plasmas, the 50P96FD has the potential to be just about as attractive a big-screen bargain as we’ve ever tested. 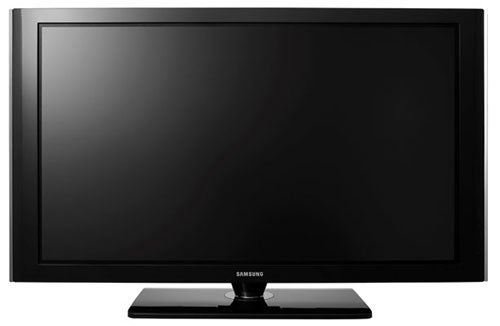 The phenomenal early attraction is built on admirably by the 50P96FD’s connectivity, too. Three HDMIs lead the way, all of which, remarkably, are v1.3 affairs. This makes them compatible with such v1.3 features as Deep Colour and automatic lip-synching. Plus they’re CEC-compatible, meaning you can use the TV’s remote to control any CEC-enabled devices connected to them.


Other highlights include a D-Sub PC interface, a digital audio line out for passing on to an AV receiver multichannel audio tracks carried in via the HDMIs, plus all the paraphernalia associated with a digital tuner.


Turning now to the 50P96FD’s full HD pixel count, it’s pleasing to find it backed up by a special aspect ratio that permits 1,920 x 1,080 sources to be mapped ‘pixel for pixel’ to the screen’s own resolution. Furthermore the HDMIs are able to take in 1080p sources in all their configurations, including the 24fps format used to encode most HD movies onto HD DVD and Blu-ray discs.


So far, so good. But this set still has plenty more hidden treasures to unearth. Not least among these is the inclusion in the 50P96FD’s screen construction of a new Ultra FilterBright element that Samsung reckons eliminates up to 90 per cent of ambient reflections from the screen, giving a noticeable boost to perceived black levels in the screen’s images. Indeed, so potent is the Ultra FilterBright effect in conjunction with Samsung’s core plasma engine that the 50P96FD boasts a huge claimed contrast ratio of 15000:1 – a figure that’s only marginally down on the 16000:1 claimed by Pioneer’s ground-breaking KURO plasmas.

It’s worth remembering before we get too carried away by this that few brands play the ‘extravagant numbers game’ better than Samsung. But even if the 50P96FD’s black levels don’t get quite as close to those of Pioneer’s KURO sets as the numbers suggest, they must surely still be a cut above the average.


And still we’ve not touched on anything like the full setting flexibility available to you, with other user options including adjustments to the white balance, gamma levels, colour tones, noise reduction levels and black levels. 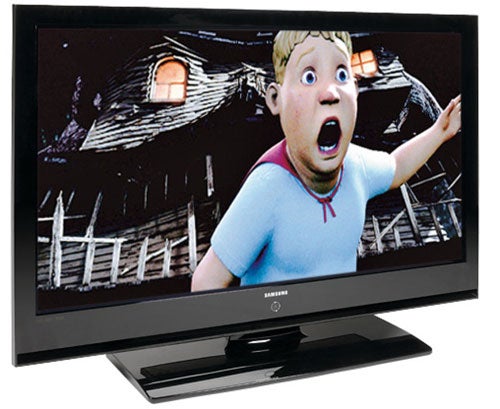 It should be said here that having all these features is made a little less enjoyable by the TV’s use of a strangely sluggish set of onscreen menus that react really slowly to the remote control. But of course, the chances are that once you’ve spent some quality time getting things looking right the first time you use the TV, you probably won’t need to return to most options again very often, if at all.


The above statement assumes, naturally, that it’s actually possible to get the 50P96FD’s pictures ‘looking right’. So we’re happy to say that our assumption is fully supported by the 50P96FD’s image performance. In fact, it looks very right indeed.


Looking first for obvious benefits brought by the full HD pixel count, all the things we’d expect to see are abundantly apparent. And so, for instance, fine details while watching HD sources are sensational, delivering every last atmospheric texture with the Xbox 360’s Bioshock, and every last leaf of the Skull Island jungle in the HD DVD of Peter Jackson’s King Kong.


Colours, too, enjoy the sort of blend subtlety only possible via the extra pixel density afforded by full HD TVs, helping skin tones in particular look more authentic and three-dimensional than is common.

As for noise, the fact that the TV does not need to scale down full HD sources to a lower resolution results in absolutely immaculate HD images, free of such common flaws as dot crawl, grain and edge softness. Provided, of course, that you use the 1:1 pixel setting.


So the 50P96FD delivers on its full HD credentials. But that’s far from the end of its talents. Black levels, for starters, are outstanding too. Life in Bioshock’s underwater city of Rapture is made both easier and more unsettling by the fact that you can see hidden enemies or objects in even the darkest of corners, thanks to the way the screen can resolve black without serious interruption from the greying over effect seen with so many (especially LCD) flat TVs. Or in movie terms, you can actually see the background walls of Captain Barbossa’s treasure cave in the Blu-ray of Pirates of the Caribbean, rather than them being lost in a low-contrast grey-mist.


The Samsung’s colours aren’t just subtly blended, meanwhile. They’re also unusually vibrant by plasma – especially full HD plasma – standards, really bursting to life for rich, bright material like the red jackets of the soldiers during Captain Jack’s escape from hanging at the end of the Pirates of the Caribbean Blu-ray. 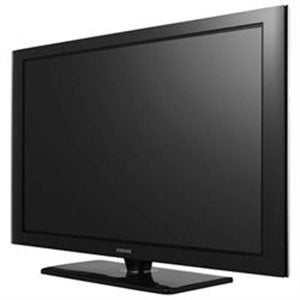 One final plus point is the 50P96FD’s almost complete freedom from the sort of dithering noise over skin tones that still affects a number of plasma TVs.


That’s not to say that motion is immaculately handled, mind you. For really quick motion, such as the ships during the space battle that kicks off Star Wars Episode III: The Revenge of the Sith, can look a touch blurry at times. Bringing in the Movie Plus mode definitely helps such motion look crisper, but only at the expense of some quite noticeable noise around the moving objects’ edges. In other words, we couldn’t get motion totally perfect no matter what we tried.


We’d also say that good though they are, the Samsung’s black levels aren’t as profound as those of Pioneer’s KURO screens, while the images from Panasonic’s new full HD plasmas can perhaps look a touch more naturally coloured.

One final niggle concerns the 50P96FD’s audio, which doesn’t quite have the aggression to do its large pictures proud.


So a run of little niggles at the end of our review prove that the 50P96FD isn’t perfect. Big bloody deal. Yes, its black levels might not be as good as Pioneer’s, and yes, its colour palette might not always look quite as natural as Panasonic’s. But put up more fairly against anything else in its own price bracket, it’s in a class of its own.