Pebble: a small, rounded stone, often worn smooth by the action of the elements. Or so you would think. Of course, in this case, Pebble: a rather large, rounded PC monitor, worn smooth by the action of designers and marketeers. Indeed, Pebble is the standout name Samsung has chosen for part of its recent LCD monitor and television range. Inevitably, this monitor still carries the name SyncMaster, and model number (2232BW), but there’s just something cool about being able to say you’re browsing the net or playing a game on a Pebble. 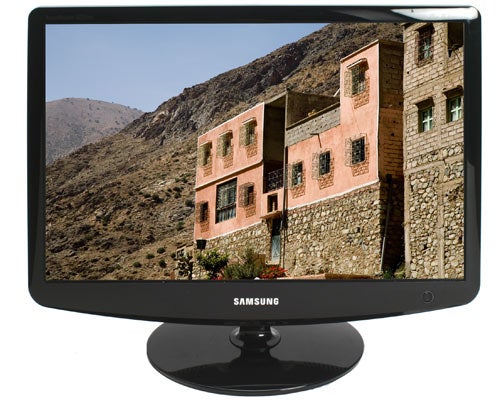 So what can another 22in monitor do to distinguish itself in an already overcrowded market? Perhaps offer a superb quality IPS or MVA panel as opposed to the usual cheap TN? Or how about full-HD resolution? Not quite. However, what the 2232BW supposedly does bring to its corner is a dynamic contrast system and fast 2ms panel in a gorgeous package. To find out if this is enough to compete against the contenders in its size-class, read on.


This iteration of the SyncMaster comes with all the cables to match its inputs, VGA and DVI, and thankfully a nice cleaning cloth. I say thankfully because this is one accessory you will be using a lot – the 2232BW’s finish is remarkably resistant to fingerprints, but dust shows like a fluorescent flea on dark carpet. For its Pebble monitor range, Samsung has decided to port some of its rather spiffing television styling to computer screens, and the results are very pretty indeed.


Featuring the same hard curves and smooth edges as its namesake, I am tempted to compare the Pebble to some sports-car or other. Its looks are that sleek, with a piano-black mirror finish that mercifully doesn’t extend to the panel’s coating. Overall, it’s not hard to see why the 2232BW won Samsung a 2007 iF Product Design Award. The only thing that spoils its svelte curves slightly is the Samsung logo in white lettering across the lower bezel.

The OSD buttons are labelled on the front of the monitor across the lower bezel, but before you cheer at how much easier this makes operating the settings, or groan at the aesthetic crime of it, let me tell you that they’re a mixed blessing. On the one hand, they’re just clear enough to read in bright light without being in your face, therefore leaving the Pebble’s looks unmolested. On the other, in dimmer light they’re simply illegible. But kudos to Samsung for daring to stick them on the front of a designer monitor nonetheless, and saving us some neck-ache.

The only problem with the design is that the 2232BW doesn’t just have the looks of a TV, but the ergonomics as well. And that’s most definitely ”not” a good thing. Samsung’s ‘revolutionary ball hinge’ is aptly named, as trying to assemble the three parts of the Pebble was something of a nightmare. Compared to the wonderfully easy click assembly of, say, BenQ’s 22in X2200W, having to spend ten minutes sweating and cursing to get a base properly fitted is a demoralising experience.


This might have been forgivable if the ‘revolutionary’ system actually led to increased flexibility, but here the 2232BW betrays its TV-styling ambitions by featuring almost no adjustability whatsoever. You get tilt, and that’s it. It doesn’t really get more basic than this. On the bright side, the rigorous assembly process left me with no doubts of the Pebble’s excellent build quality, with strong plastics that don’t flex or creak under excessive force. 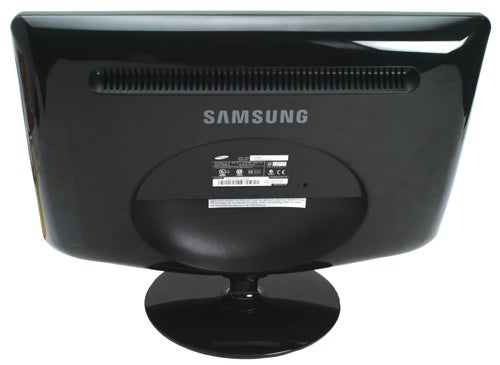 Personally, I would choose features over looks anytime, but for those of you who prefer the reverse (that’s you MacBook Air users – ed.), this is one classy display (even if you will need to find a few telephone directories to put under it). Now I’m beginning to make the 2232BW sound like the Barbie doll of the monitor world; all looks and no intellect. Let’s hope at least the former holds true for the panel.


Actually, at first glance the SyncMaster 2232BW seems to have both, as we find good colours complemented by the intelligent dynamic contrast and MagicColor systems. Except, much like Barbie, the dynamic contrast system really isn’t that intelligent. Unlike for example on the recently reviewed LG Flatron L206WU, it doesn’t seem to have a particularly positive effect on movies and games, and that’s the only material I would consider it for. 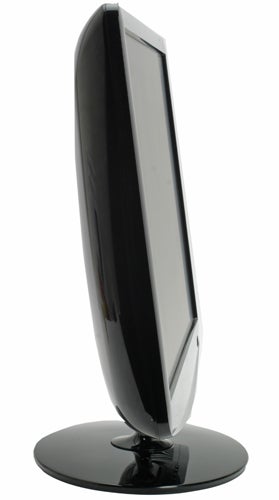 However, the SyncMaster 2232BW does have some tricks up its sleeve. First of all, there are the seven MagicBright presets, which, while nothing to write home about, are mostly well-balanced and accessible at the touch of a button. The Text mode is suitably dimmed to give you hours of typing pleasure without causing undue fatigue to your eyes, though I preferred Internet to the Movie and Game modes for… well, movies and games. As a matter of fact, if you want to retain dark blacks, forget the Movie and Game modes exist, since they crank brightness up to maximum.


Secondly, we have the MagicColor System, which not only makes a discernible difference, but does so mostly to the good. Obviously, when doing work that requires colour accuracy, it’s best left off. It also introduces very slight banding, but this is so minimal you probably won’t notice during normal use.

Samsung has been employing MagicColor in its screens for a while now. In movies and games especially, it really does make a lot of difference, adding vibrancy and depth to colours and in some cases actually having a greater perceived effect on contrast than the Dynamic backlighting. Only if your movie material is predominantly dark with few bright colours, like for example Donnie Darko, is it better left off.


It’s essentially the software equivalent of glossy coating: a gimmick that actually works. Unlike coating though, it can be turned on or off at will. In addition, Samsung is one of a growing number of manufacturers that offers split-screen adjustments, allowing you to see the effects of MagicColor as you apply it. 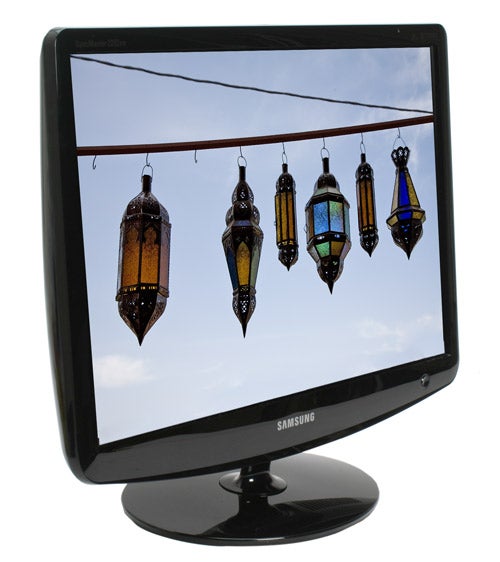 However, all the processing in the world isn’t going to solve a few basic problems that afflict the 2232BW. Despite its 3000:1 claimed contrast ratio, blacks aren’t the deepest, and you lose some detail in dark areas no matter how you configure it. White-differentiation isn’t the best either, and despite offering better viewing angles and less backlight bleed than many others in its class, there’s a slight red cast to blacks that is difficult to compensate for.

Don’t get me wrong, the Pebble SyncMaster 2232BW doesn’t offer bad image quality by any means. As a matter of fact, for a TN panel it’s above average – but for the money, it simply isn’t good enough. Never mind the Pebble’s minimal inputs, complete lack of physical adjustability, or even a cable-tidy system; the truth is you can get similarly-specified brand-name screens for two thirds of the price. Or for the same amount, the 22in HP w2207 offers far superior adjustability, more connections, and better image quality.


Samsung’s SyncMaster 2232BW Pebble draws you in with its great looks and smooth curves, but from the moment you assemble it to the instant you install it on your desk, you realise it’s a case of style over substance. It still manages to entice with its picture quality, but for the money there are better alternatives out there. If you are willing to sacrifice two inches, you can even get LG’s DisplayLink-enabled (Linkout:https://www.trustedreviews.com/displays/review/2008/04/17/LG-Flatron-L206WU-20in-Widescreen-DisplayLink-Monitor/p1 Flatron L206WU) for your money, which apart from the design is superior in every respect.