The Samsung Odyssey G9 almost has it all – image quality is superb, it’s packed with features and it has a stunning form factor. The aspect ratio and price mean it won’t be for everyone, but it’s a deeply impressive bit of tech.

The Samsung Odyssey G9 is one of the most ambitious gaming monitors on the market.

It’s a huge amount of technology, but it does mean the G9 is expensive – Samsung’s latest costs a whopping £1280. Is it worth the steep price?

The super-wide design is brilliant for racing games, and it works well in RPG, strategy and adventure games; titles that benefit from expansive views.

It’s great for productivity, especially if you work in large horizontal timelines, and it can easily replace a multi-monitor setup. The 1000R curve improves immersion and viewing angles when compared to conventional 1800R designs too. 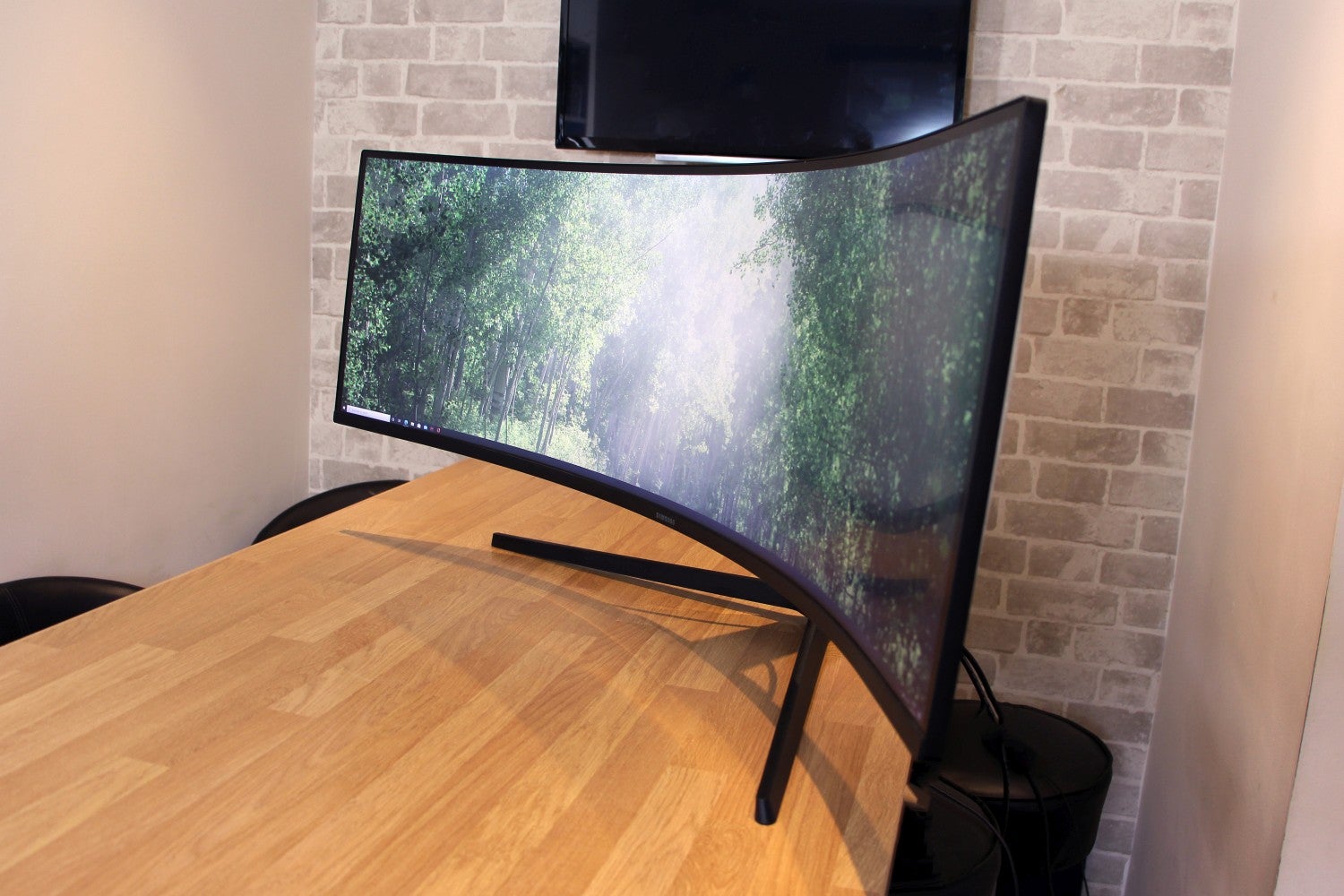 Bear in mind that the 32:9 form factor may not always work well. In FPS games you’ll need more vertical space, and lots of esports games don’t really benefit from the extra width. You’ll also get black bars down the sides when watching movies.

The G9 mixes glossy white plastic with rear-mounted RGB LEDs and a stylish stand. It’s got 120mm of height adjustment, which is good for a super-wide panel, and it has tilt and swivel options. Build quality is rock-solid, and the panel has two DisplayPort connectors, an HDMI port and two USB 3.0 ports. 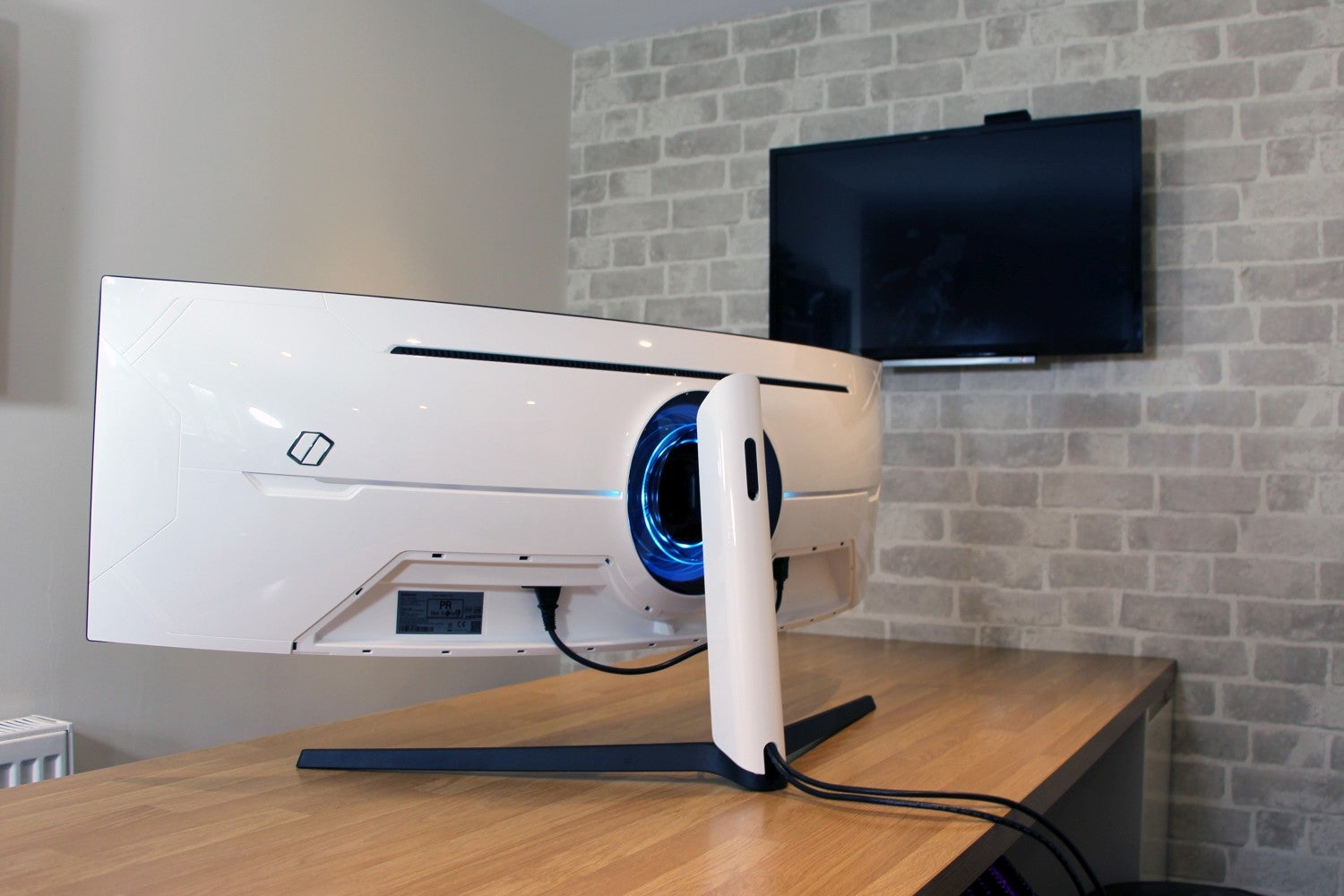 As with the G7, though, the G9 does have physical disappointments. There’s no USB Type-C or Thunderbolt, and the lighting is underwhelming – not very adjustable and impossible to see from the front.

The weight of 16.7kg is necessarily hefty, and the headphone holder is flimsy and difficult to reach. Setting this screen up can be inconsistent: the OSD is excellent but a proliferation of screws means the G9 is awkward to build.

The generous 5120 x 1440 resolution delivers a density level of 109ppi, which is easily good enough for gaming. Only 4K screens will be sharper. A trickier issue will be the sheer number of pixels produced by this panel – the G9 uses almost as many as a 4K screen, so you’ll need a powerful graphics card.

You’ll also need a powerful GPU to take advantage of the 240Hz refresh rate, although that’s a welcome addition here. It works with AMD and Nvidia graphics cards and delivers butter-smooth performance in the fastest games thanks to the latest syncing technology. It did however exhibit a little bit of ghosting and modest halo effects, but it’s better than most of its contemporaries and most people just won’t notice. Similarly, there’s a tiny bit of backlight bleed but it’s barely noticeable. 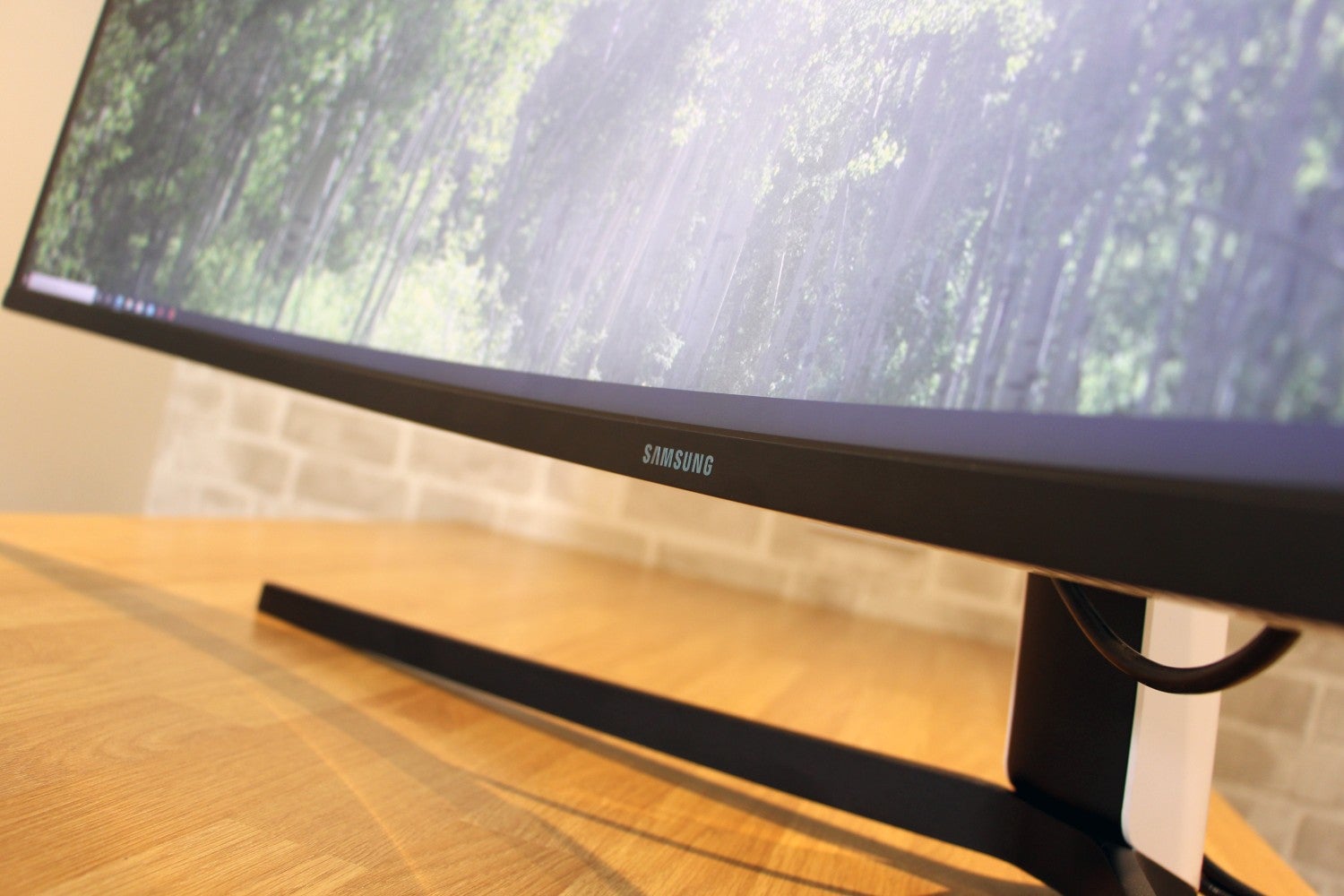 Elsewhere, the Samsung uses DisplayHDR 1000, which is another area where this screen outpaces its rivals, and the underlying panel is a 10-bit VA display with a 1ms response time.

Out of the box, the G9’s brightness and black points of 354 and 0.18 nits deliver a contrast ratio of 1967:1. That’s far better than any IPS display, and it means games have huge punch, vibrancy and depth. The great contrast is paired with a reasonable Delta E of 2.73 and a colour temperature of 6435K, so colours are easily good enough for gaming. The G9 maintained these impressive results with the brightness reduced to a more conventional level, and its uniformity is great – a backlight strength deviation of just 11% on a 49in widescreen is tremendous. 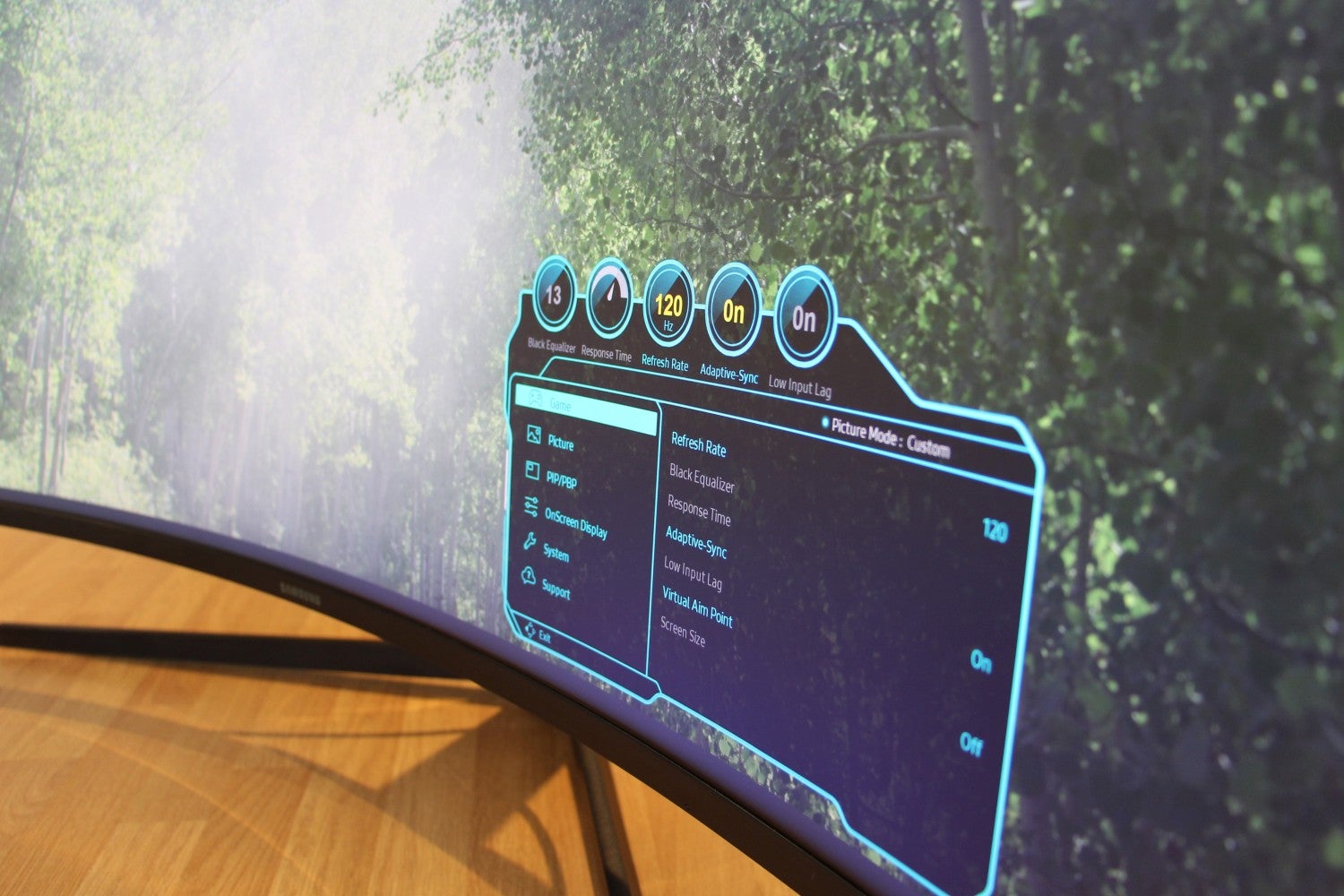 The G9 rendered 99.7% of the sRGB colour gamut and 97% of the DCI-P3 space, and its HDR performance was impressive. It peaked at around 1000 nits of backlight strength and delivered a black point of 0.05 nits, with both figures adhering to DisplayHDR 1000 standard.

These figures helped the screen deliver a noticeable increase in depth and vibrancy in HDR content. It’s better than most gaming screens in this regard, although the inclusion of ten local dimming zones is disappointing, meaning the HDR lacks nuance when compared to the best TVs. 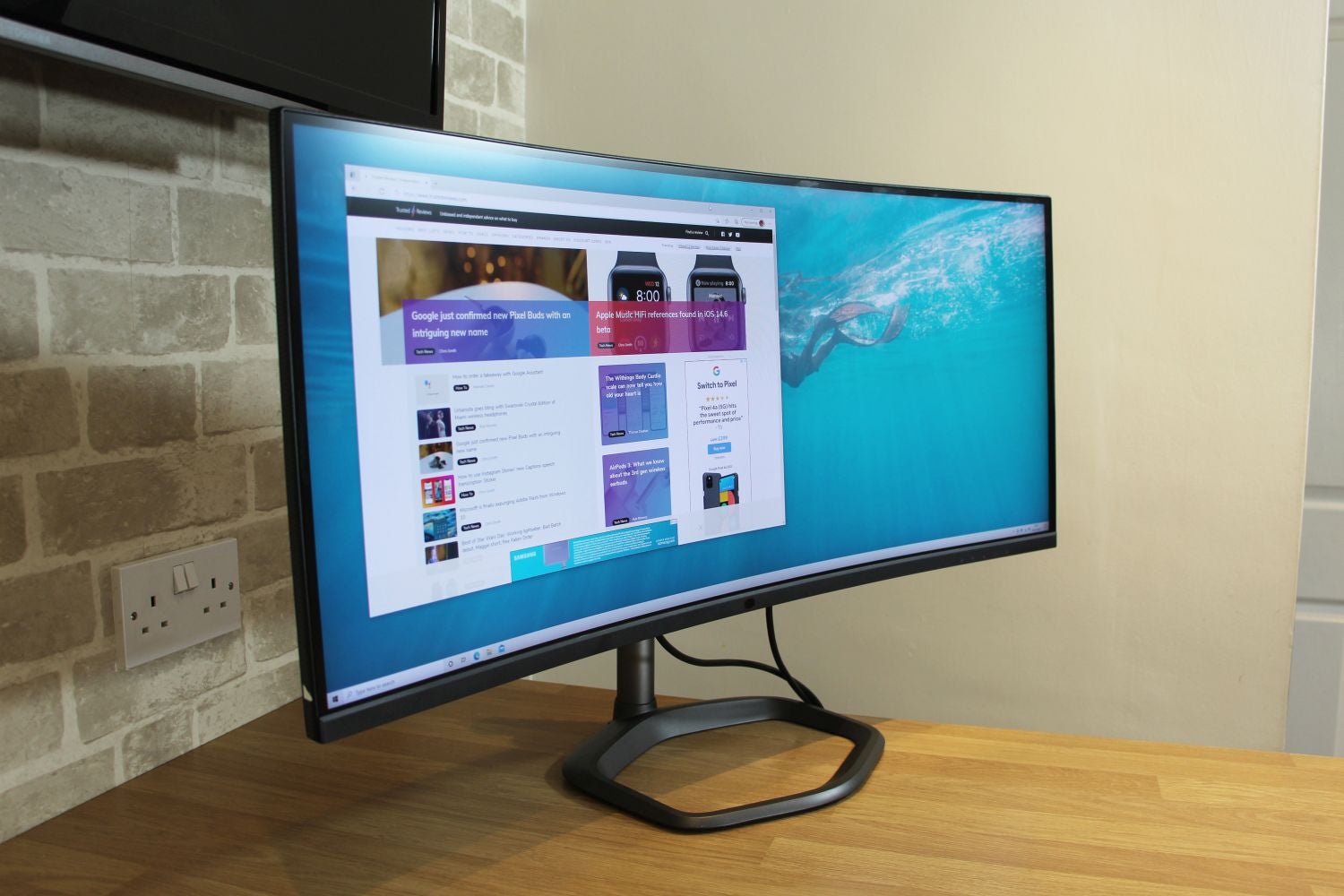 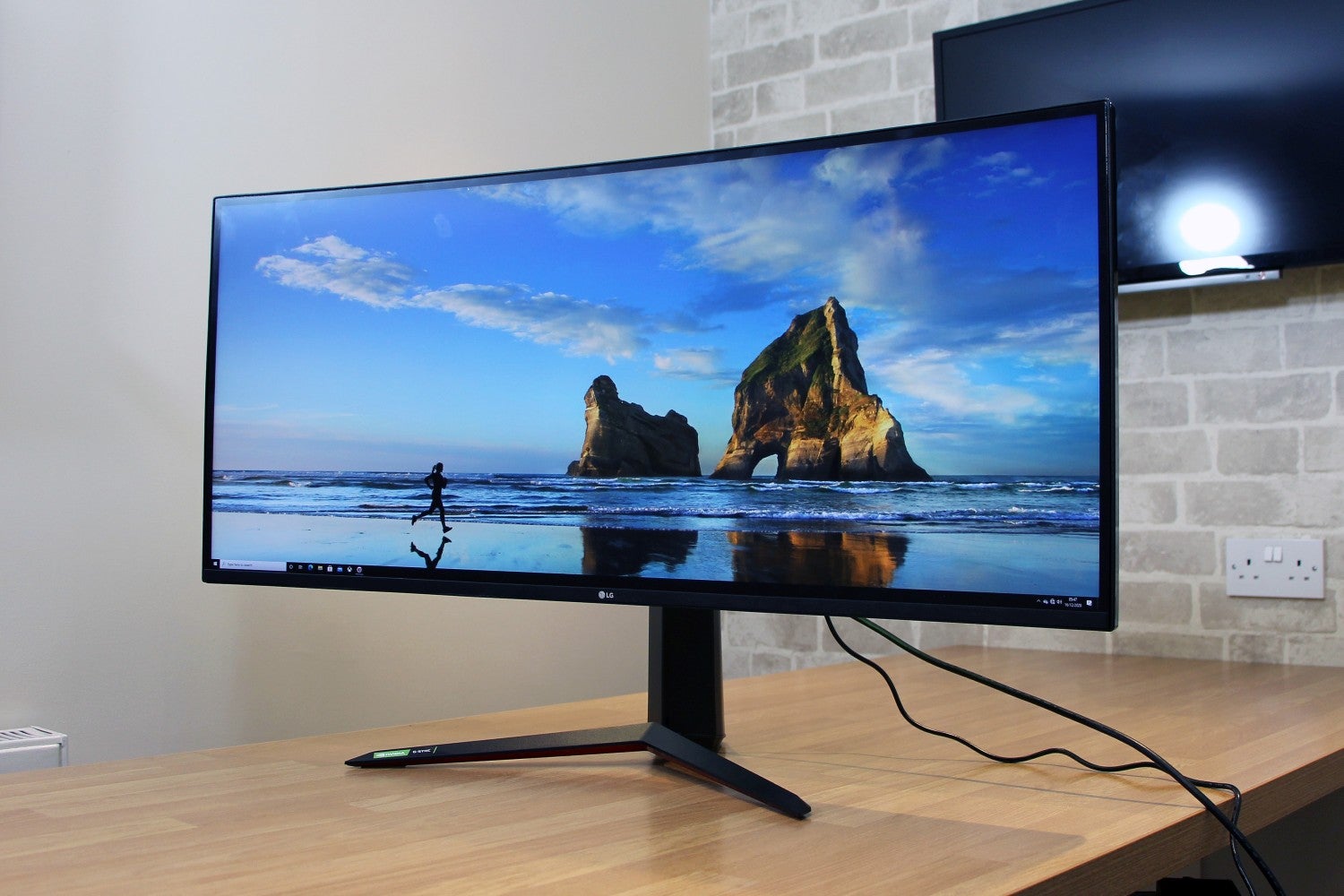 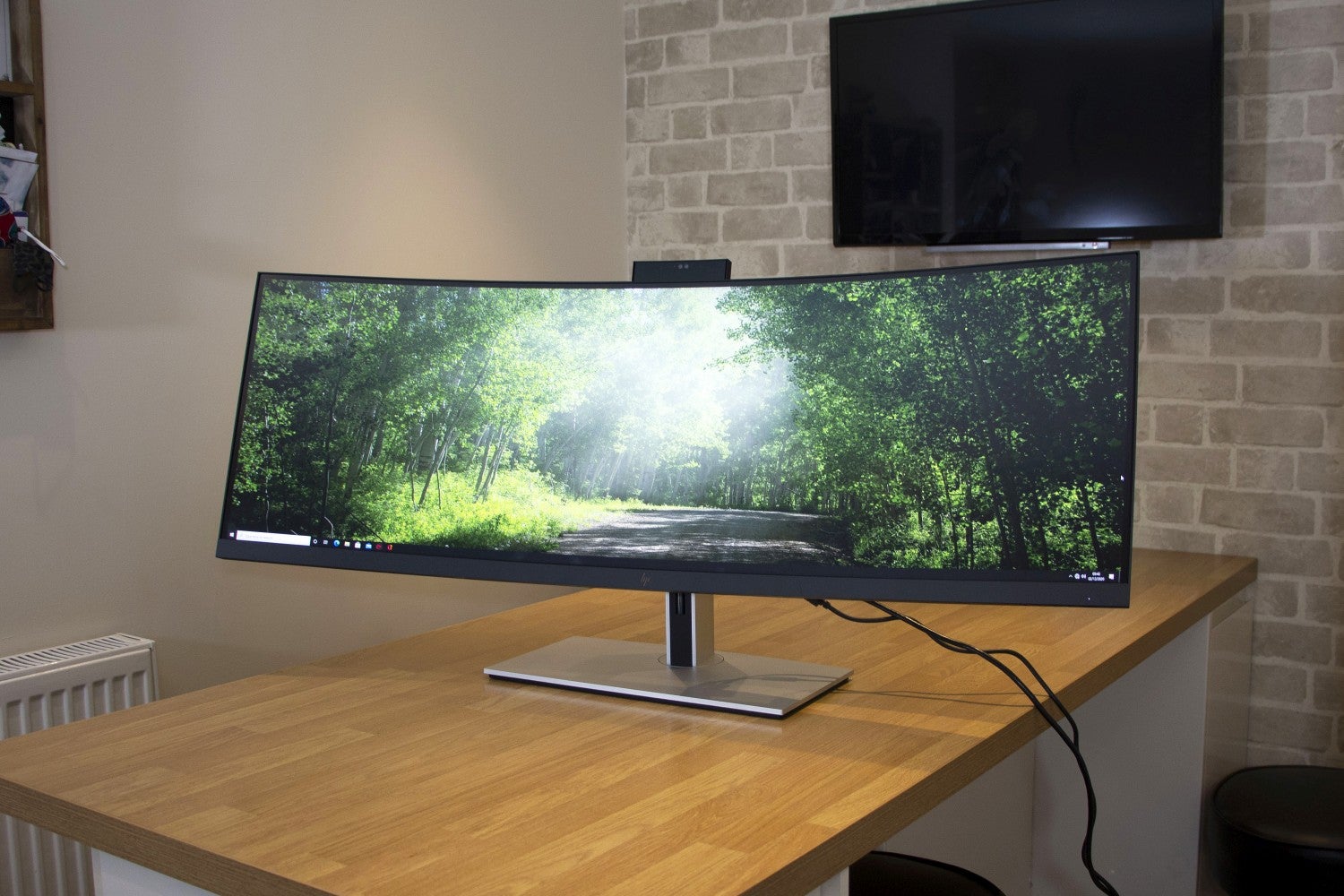 How do you update Samsung Odyssey G9 firmware?

You’ll have to download the drivers from Samsung’s support website to a USB drive, plug the USB stick into the G9’s service port and then go to ‘Software Update’ under the ‘Support’ menu.

Does Samsung Odyssey G9 have speakers?

The Samsung Odyssey G9 does not have any speakers.

When was the Samsung Odyssey G9 released?

The Samsung Odyssey G9 launched back in June 2020.

The range of colours a display is capable of reproducing.