As is evidenced by Samsung’s growing range of Android-powered Galaxy compacts and CSCs, as well as a host of innovative Wi-fi-powered Smart cameras, Samsung has a growing tradition of leading the way in digital camera development.

This is no doubt in some part thanks to the Korean tech giants prominence in several other electronics sectors, including Smartphones and LED development.

The new Samsung NX Mini is the latest model to benefit from the bumper R and D department, setting new standards in the interchangeable lens camera market.

The model supersedes Nikon’s 1 series and the Panasonic Lumix GM1 in the micro CSC department, leapfrogging the pair and taking the title of the smallest and lightest interchangeable lens camera in the world.

Such a feat is impressive, although at times it can present issues with regards to handling and performance, begging the question of whether Samsung has delivered a class-leading miniature CSC. 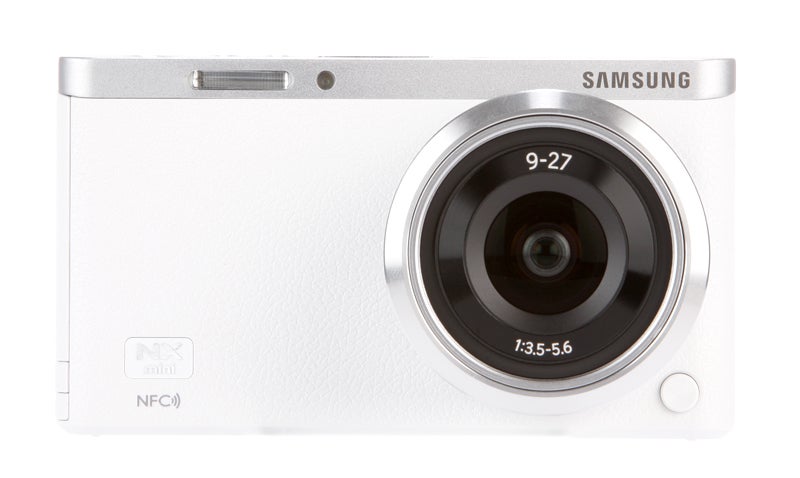 The model sports a good sized 1in BSI CMOS sensor complete with a 20.5MP resolution. Although the sensor is not quite as large as some other smaller CSCs, it’s the same sized sensor as that utilised in the headline-making Sony RX100 III.

The sensor is also capable of delivering HD video capture at full 1920 x 1080 resolution and at 30fps.

The NX Mini’s small frame also manages to pack in a decent sized LCD screen. The model sports a 3in TFT LCD touchscreen, although unfortunately its 460k-dot resolution is somewhat disappointing by today’s standard.

The screen is, however, of the vari-angle variety and can be tilted around 180-degrees to be viewed from in front of the lens – perfect for selfies.

As you might expect for a new Samsung CSC, the NX Mini ships with a host of connectivity options. The model sports both Wi-fi and NFC connectivity, meaning that it can communicate with either Smartphone or Tablet on both the Android and iOS operating systems with ease.

Once connected, users have the option to wirelessly transfer images, as well as control the camera for wireless shooting and image review. 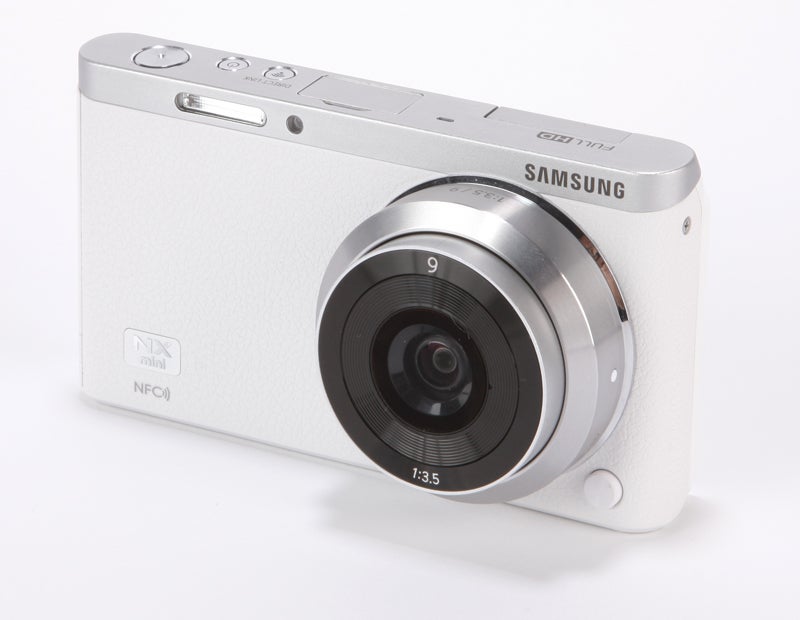 As you might expect for a camera that undoubtedly has an eye on the consumer market, the NX Mini features a range of different shooting modes, some of which could be described as being more towards the ‘novelty’ end of the spectrum.

For example, the model features ‘Wink’ and ‘Smile’ shooting settings – these modes automatically take a picture when a face is detected in the frame and can detect up to 10 individual faces.

A by-product of developing such a small body is that the NX Mini sees the debut of a completely new lens mount. The model now features the NX-M lens mount, and as such will see the introduction of new lenses in the near future, although for the time being existing NX mount lenses can be used with the ED-MA4NXM lens adapter. 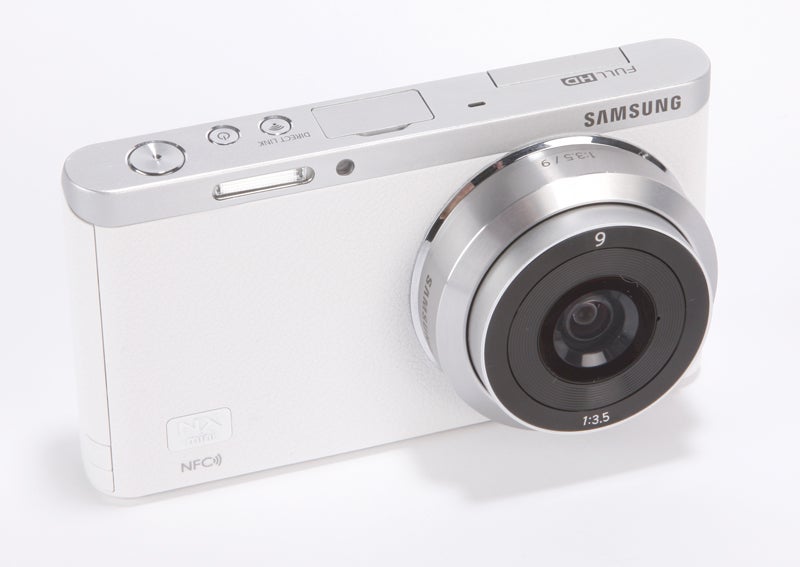 Again, as you might expect for a CSC which sits firmly in the ‘consumer’ category, the NX Mini is available in a range of different colours.

As mentioned previously, the NX Mini is the smallest interchangeable lens camera in the world, but just how small is it?

Well, measuring in at around 119mm wide, 62mm tall and 22.5mm thick – and weighing just 196g body only – it’s more in the category of most flagship smartphones currently on the market than competing CSCs.

What’s also welcome is the choice and design of the kit lens which ships with the NX Mini. This is a 9mm f/3.5 prime optic which both provides a pleasingly wide angle shooting experience and also is designed much like a pancake lens, and thus adds very little to the overall depth of the camera body. 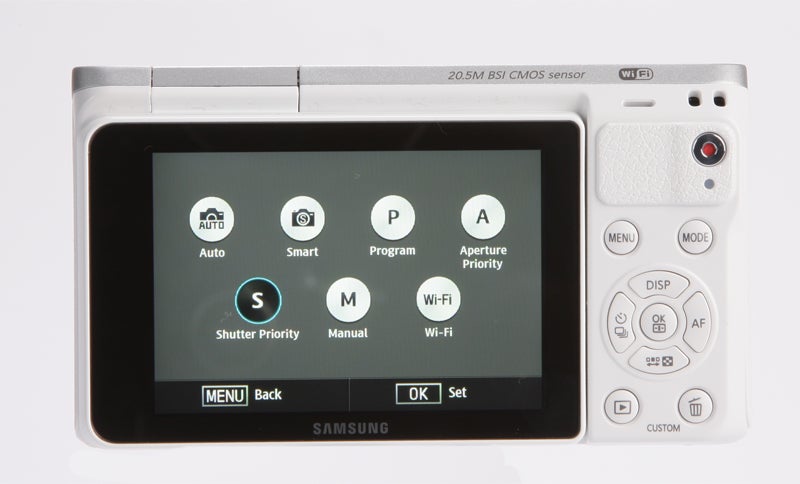 The majority of the camera’s shooting functionality can be accessed through the camera’s reasonably-sized touchscreen, although unlike some other touchscreen cameras there are a range of physical buttons placed around the camera’s body.

Unfortunately some of the buttons are poorly placed, with two particular culprits. The model’s ‘Direct Link’ button is placed right next to the power buttons, while the movie record button is placed perilously close to the natural resting place of your thumb while shooting.

As a result, both of these buttons are easy to press accidentally, something I found myself doing on more than one occasion.

The actual finish of the body itself is described by Samsung as being ‘bound by a natural leather-like material’, although closer inspection reveals this to be a somewhat misguided claim.

The finish is much more akin to a leather-look tough plastic one, although such a material will give it a hard-wearing finish. 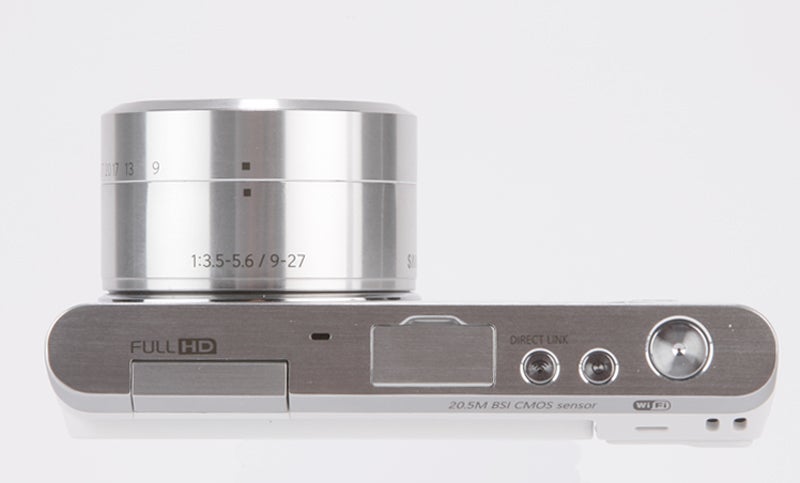 Although the NX Mini does feature a reasonable AF set-up, unfortunately it is lacking in the kind of on-chip phase detection AF several other cameras in Samsung’s CSC line-up feature.

The set-up found in the NX Mini is solely of the contrast detect variety, featuring 21 AF points in the standard mode, increasing to 35 points when shooting in close-up mode.

On the whole the AF performance is generally acceptable, delivering fast focusing speeds and accurately-focused subjects.

There is one concern over the camera’s AF performance, however, and that’s when shooting self-portraits. On occasion the NX Mini showed a tendency to lose focus all together, hunting for focus just before taking the shot and then triggering.

In terms of tracking focus, however, the camera does perform a lot better. The touchscreen allows users to simply press on the subject they want to track and the camera does the rest. 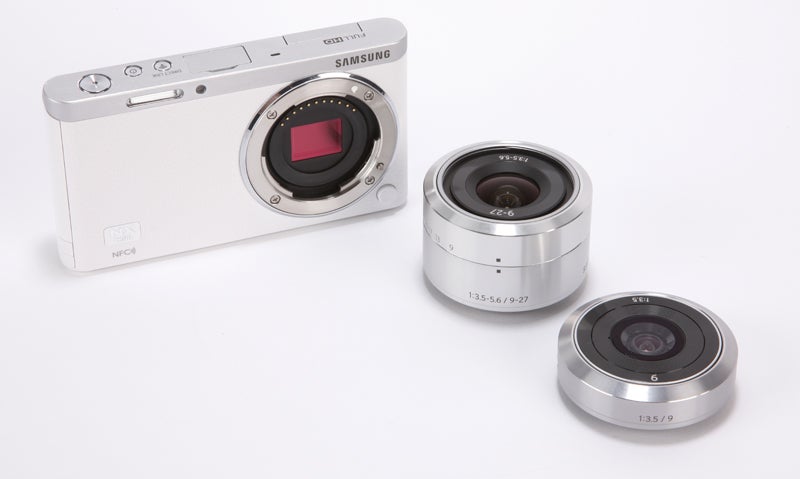 This makes the NX Mini a capable action shooter, a facet enhanced by the fast maximum shutter speed of 1/16000 second and a burst mode shooting speed of 6fps.

One impressive area is the camera’s battery life, especially when you consider how small the camera’s body is. Samsung claims that the 2330mAh battery is good for around 650 shots on a single charge with the kit lens, and during the test I generally found this claim to ring true. 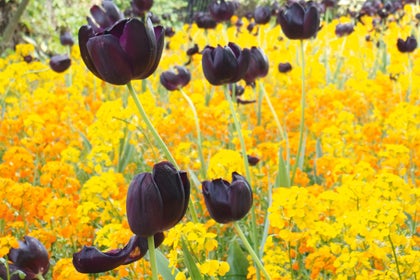 While the NX Mini’s auto white balance generally performs well, it does display a slight tendency to lean towards the warmer end of the spectrum when the chance presents itself. As a result, greens can suffer and appear less vibrant than in reality.

That being said, the NX Mini does cope well in the majority of settings, delivering attractive blue skies and generally even scenes.

Furthermore, there are a host of white balance presents available, including custom white balance, while each setting can be tweaked to suit personal taste.

The NX Mini utilises the same 221-block segment metering system as seen in previous NX models, and not without good reason.

The system has performed well in the past and it does so again with the NX Mini, rarely requiring any intervention with regards to exposure compensation in the variety of metering modes available.

The level of dynamic range captured is also fairly reasonable considering the fact that the NX Mini isn’t packing an APS-C sensor. There is a slight tendency towards the darker areas of the scene, thus resulting in odd occasions of blown highlights, however this can be rectified thanks to the camera’s Smart Range+ and HDR modes.

In practice, the far reaches of the camera’s ISO range are best reserved for emergencies however, with the NX Mini struggling towards the upwards extremities.

Between ISO 160 and 1600 there’s not much noise of note, although it does become noticeable at the latter of those settings.

Above ISO 1600 thing deteriorate, with images becoming smudged and displeasing due to aggressive noise reduction.

As ever, if you’re happy to shoot Raw then you can control the noise reduction yourself in post-production, something made even more attractive by the fact that the NX Mini ships with Adobe Lightroom in the box.

The Samsung NX Mini signals a new first in the world of digital photography, and it does generally fairly impressively.

Complete with the 9mm kit lens, the camera forms a compact package that’s sure to prove attractive to those who like to travel light.

The wireless connectivity is another plus, while the selfie-targetted LCD screen is sure to prove popular.

It’s not without flaw, with said screen proving a touch under-specified and a few image quality issues, however for those that like to travel light the Samsung NX Mini might well make the shortlist. 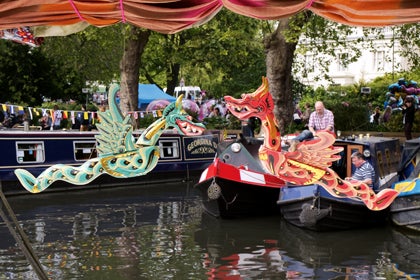 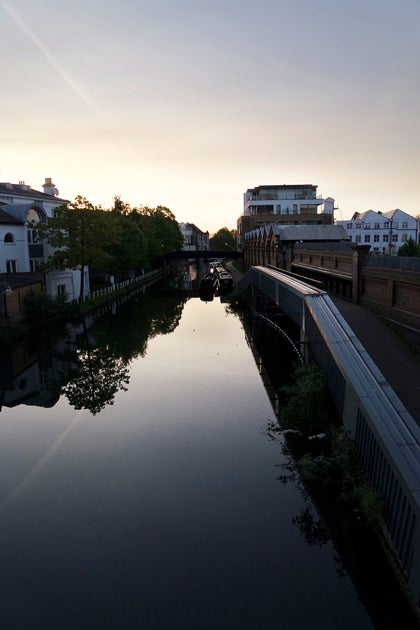 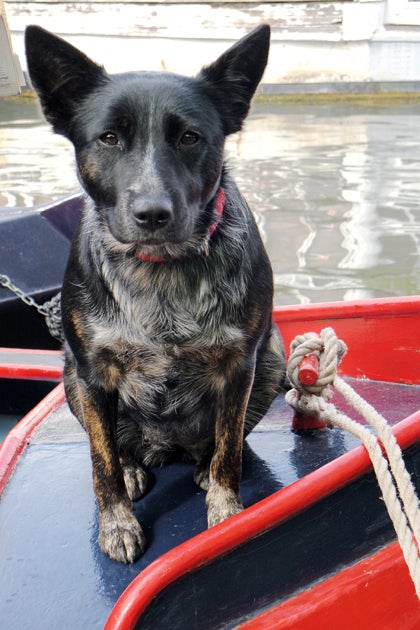