It’s an axiom of photography that a camera is only as good as its lens. You may have the world’s highest resolution sensor, the fastest auto-focus, perfect metering and flawless noise control, but without a decent lens it’s all for nothing. That’s not to say that you can’t have a terrible camera with a good lens (although it’s rare), it’s just that you can’t have a good camera with a bad lens.


Samsung is clearly aware of this. The lenses on its better cameras bear the name of the renowned German optics company Schneider Kreuznach, and I’ve found them to be among the best lenses on any digital cameras. Sometimes when a modern product bears a prestigious and historic German name, it is simply because a large Japanese company has bought the right to use that brand name on its own products, or even owns a large interest in the German company. However, as far as I’m aware, Samsung’s lenses are actually made by Schneider Kreuznach (Jos. Schneider Optische Werke GmbH) in Germany. The same brand is also used by Kodak on many of its higher-end cameras. 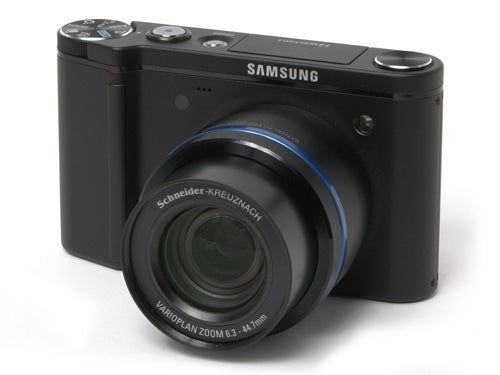 There is a prime example of Schneider Kreuznach’s finest product on this, the Samsung NV7 OPS. It is a high-spec 7.2-megapixel camera launched at the same time as the gorgeous NV10 which I reviewed last September. It shares many design similarities with the NV10, although there are also many differences. One large and obvious difference is the NV7’s big 7x zoom Schneider Kreuznach Varioplan lens. It has a focal length equivalent to 38 – 270mm, which is a useful range, but even more useful is its maximum aperture of f/2.8 – f/4.0, which is particularly fast for a digital compact. This gives the advantage of faster shutter speeds especially at longer focal lengths. For comparison, the 6x zoom lens on the Canon A710IS, a camera with a broadly similar specification, has a maximum aperture of f/2.8 – f/4.8. 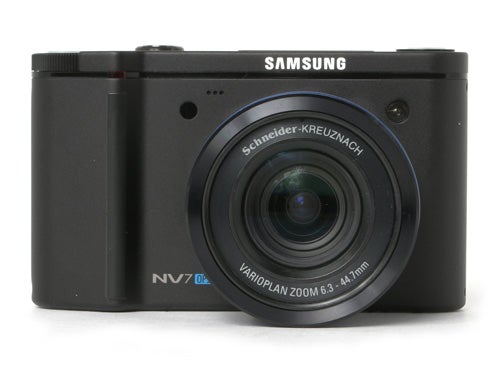 In fact there aren’t many other cameras with which to directly compare the NV7 apart from the A710IS. As well as its 7.2-megapixel sensor and 7x zoom lens it also features an all-metal body, a full range of manual exposure options, CCD-shift image stabilisation, a pop-up flash and a big 2.5-in 230k LCD monitor screen. It’s an impressive camera from any point of view, but it doesn’t come cheap. Although one retailer has had it listed at under £165, its retail price is more usually around £210-£220. By comparison the Canon A710IS is around £178, and the Ricoh Caplio R6 is about £185.

One feature which the NV7 does have in common with the NV10 is the unusual Smart Touch control system. While its two rows of unmarked black buttons may look daunting at first, it is actually a very quick and easy system to use, and completely eliminates the need for a conventional menu system. When the camera is switched on, icons are shown on the monitor next to each button, indicating functions such as image quality, exposure compensation, ISO setting and more. Simply press the button next to the parameter you wish to change, and a column of options appears. Press the button on the other axis that corresponds to your choice, and it’s done. In aperture priority, shutter priority and full manual exposure modes the Smart Touch system works especially well. Aperture or shutter speed settings are adjusted by stroking your finger along the row of buttons to move an on-screen indicator. It is very quick and precise once you’re used to it. 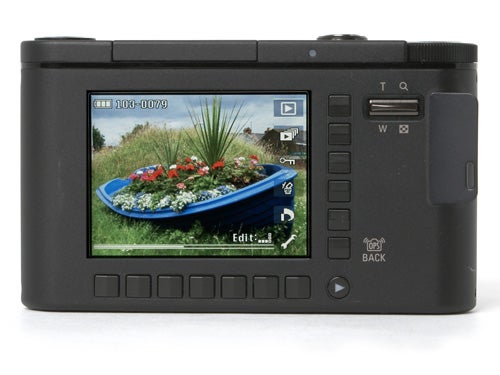 Despite its stylish exterior and unusual control interface, the NV7 is well equipped for creative photography. In manual mode shutter speeds of 15 seconds to 1/1500th are available, as are aperture settings from f/2.8 to f/7.3 in 1/3rd EV intervals. It also has matrix, spot or centre-weighted metering, and optional manual focus. There is also automatic exposure bracketing. Thanks to the sculpted front handgrip and the strap lug that doubles as a thumb grip it handles extremely well. Its performance is better than average for what should probably be considered a super-zoom, although it’s a little slow if you’re used to style compacts. It starts up in a fraction under three seconds, and shuts down again in just under two. In single-shot mode it has a shot-to-shot time of just under three seconds, while in standard continuous mode it can shoot at about 1.3 seconds per shot. There is also a high-speed burst mode that fires off three shots in just under two seconds, as well as a motion capture mode which shoots up to 20 frames at 1024 x 768 resolution and 7.5 frames per second. 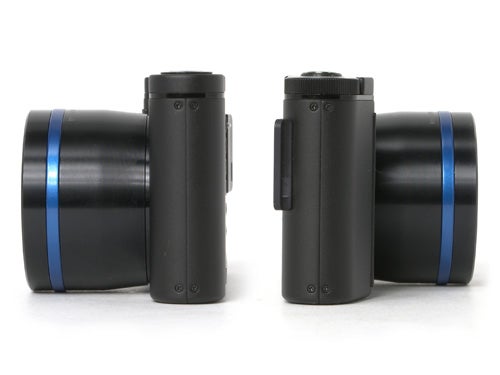 Other performance figures are also good. In video mode the camera can shoot at 640 x 480 resolution at 30fps, and the zoom lens can be used while filming. The camera is powered by an 860mAh battery which is larger than average for a compact camera, although Samsung makes no specific claim for its duration. I took over 90 shots on a full charge and the battery indicator was still reading as full. As for storage capacity, a freshly formatted 1GB card provides enough space for at least 270 shots at maximum quality, although it should be noted that the NV7 is not compatible with SDHC cards.

The moving CCD image stabilisation system is presumably Samsung’s own, although it operates on the same principal as systems used by Pentax and Sony. Motion sensors and tiny actuators move the CCD in response to any camera vibration, allowing the camera to be used hand-held at shutter speeds lower than would otherwise be possible. The Samsung system has two modes, one which works only when the photo is taken, and the other which works continuously while the shutter button is half-pressed, giving a stabilised view on the monitor. In this mode you can actually hear it working as a high-pitched buzzing noise. The system definitely works, but I found that it wasn’t quite as effective as other manufacturers’ image stabilisation systems. It provides a reliable one stop of extra low-speed stability, but pushing it to two stops proved to be less reliable. 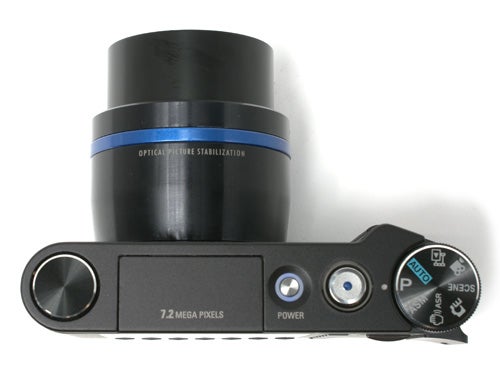 As might be expected the lens performs superbly, producing excellent sharpness across the entire frame at all focal lengths, with minimal wide-angle barrel distortion. Colour rendition and exposure are also excellent, although dynamic range is somewhat limited, with little shadow detail and some burned-out highlights. However the NV7 does have a major problem with image noise, and I’m not talking about the buzzing OPS system. Even at the lowest ISO setting and normal shutter speeds there was visible chromatic noise (random red/green mottling) in the darker and mid-tone areas of the picture and luminance noise elsewhere. The 7MP image files average just over 3MB, which is a bit on the small side, and there is some evidence of image compression on most images even at the maximum quality setting. This is the fault of the image processing system, which is very disappointing. It could have been so much better. 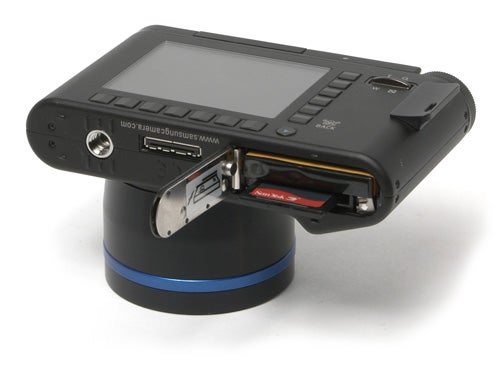 The Samsung NV7 OPS had the potential to be an outstanding camera, with a superb lens, great styling, adequate performance and a useful range of features including image stabilisation. However the sub-standard image processing system and resulting image noise problems really let it down. 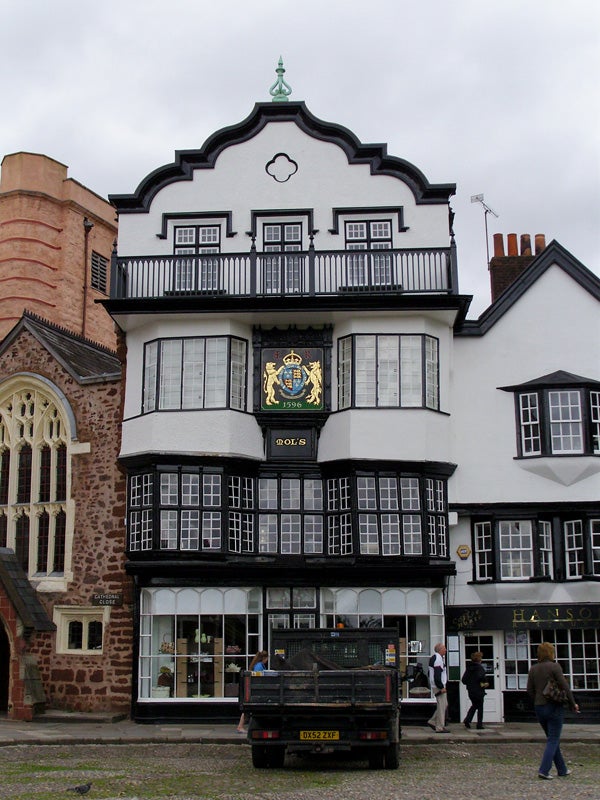 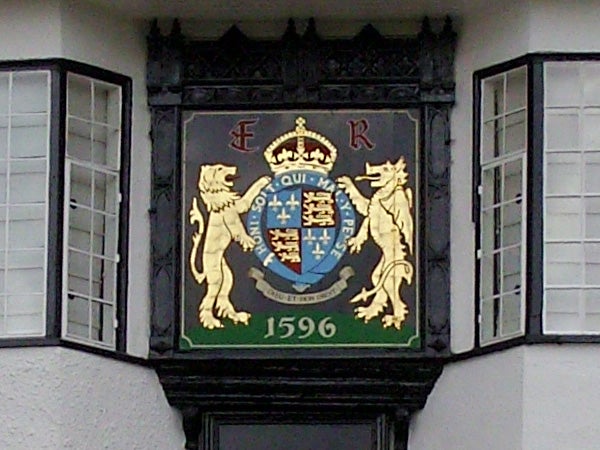 Even at the lowest ISO setting there is colour speckling plainly visible. 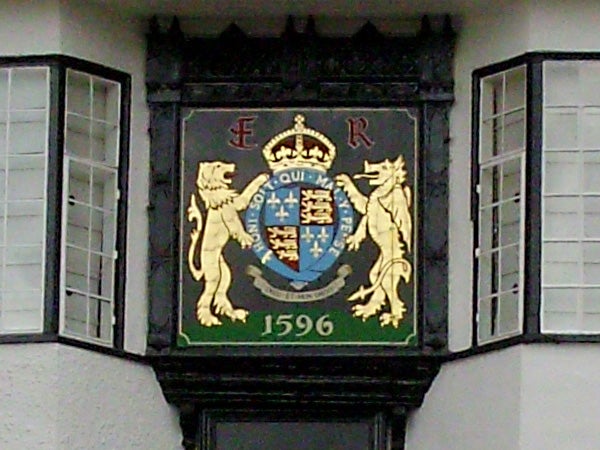 At 200 ISO the noise is worse, and the level of fine detail is much lower. Look at the lettering on the central banner. 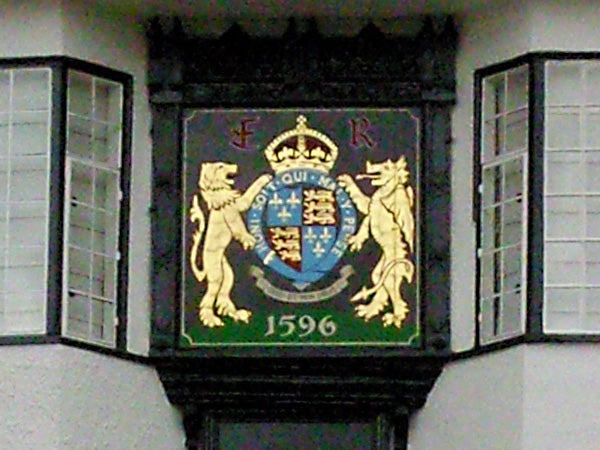 At 400 ISO the image quality is very poor, and the colour noise has resulted in a green tint over the whole image. 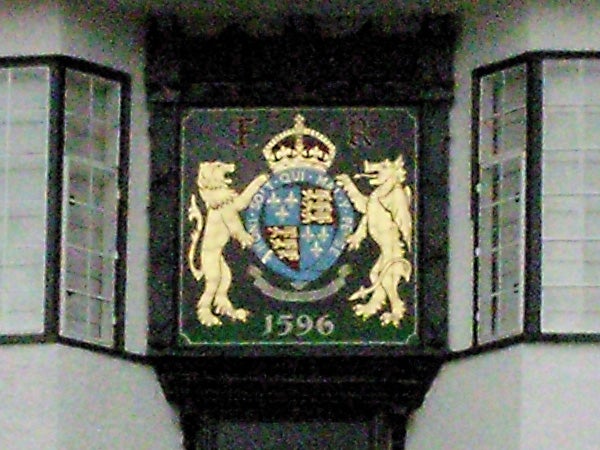 At 800 ISO the image quality is so poor as to be almost unusable, and there is almost no fine detail left. 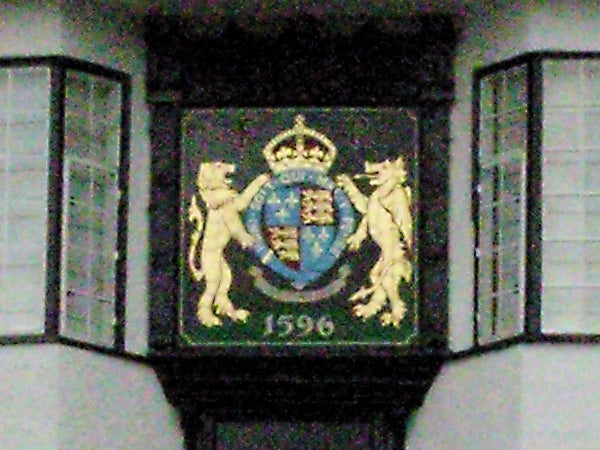 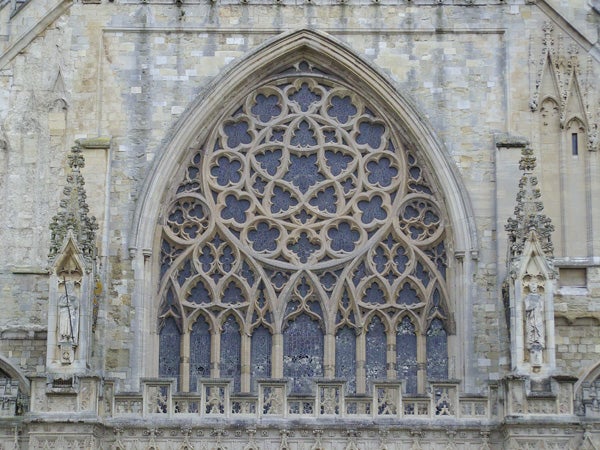 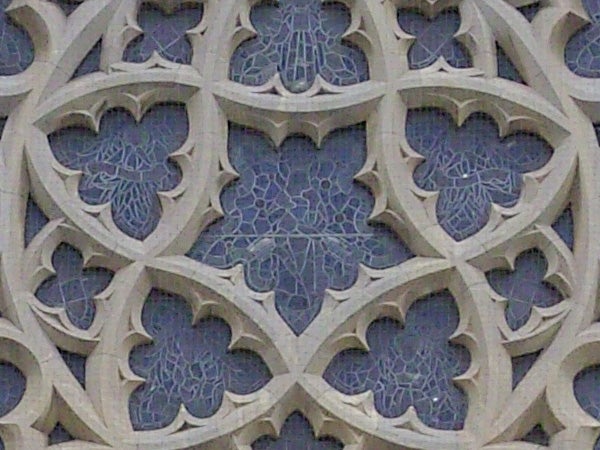 The lens produces plenty of detail, but the sensor and image processor simply can’t take advantage of it. The shot is spoiled by image noise and compression. 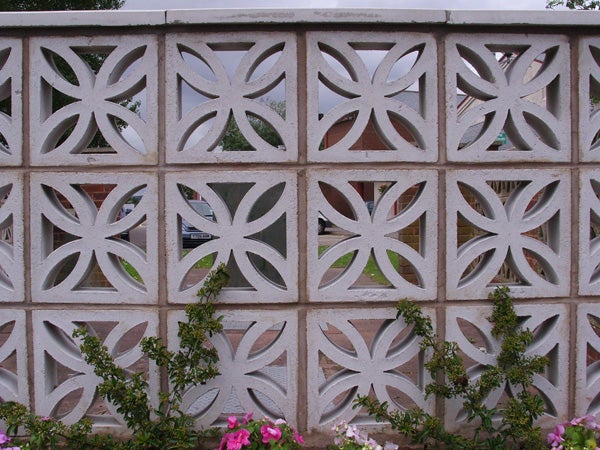 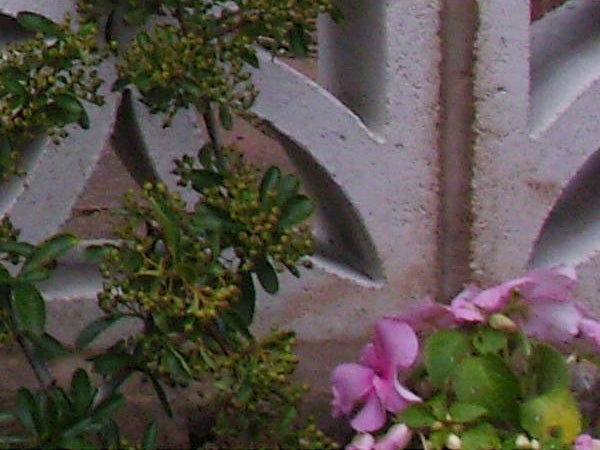 This corner crop from the above image shows excellent corner sharpness. 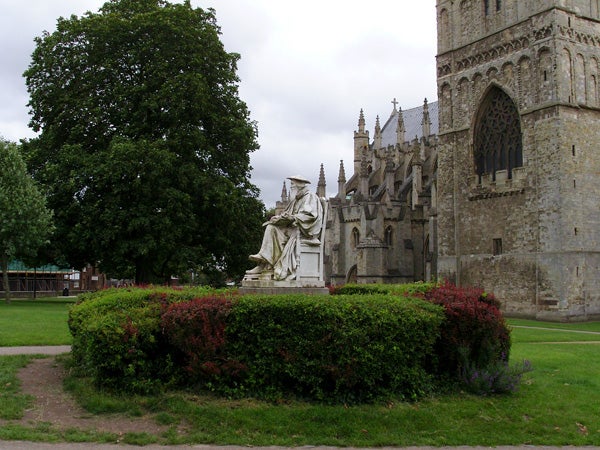 The wide-angle end is equivalent to 38mm. 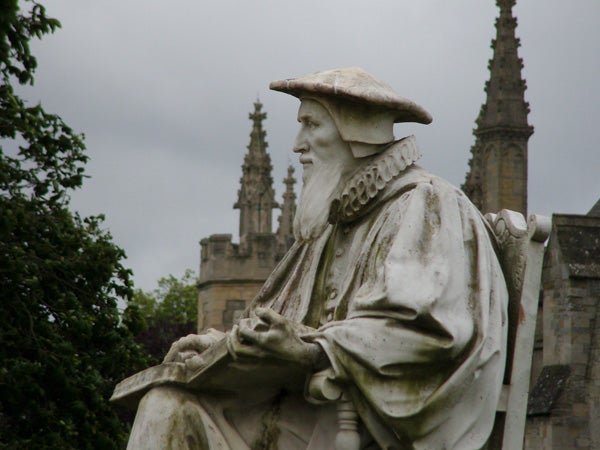 The 7x zoom lens has a telephoto setting equivalent to 270mm, great for pulling out details in a scene. 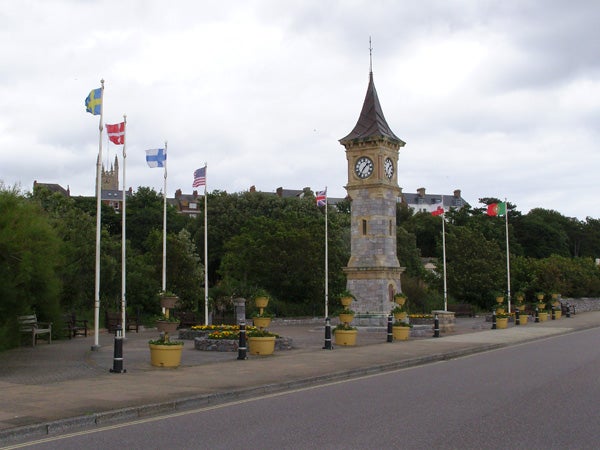 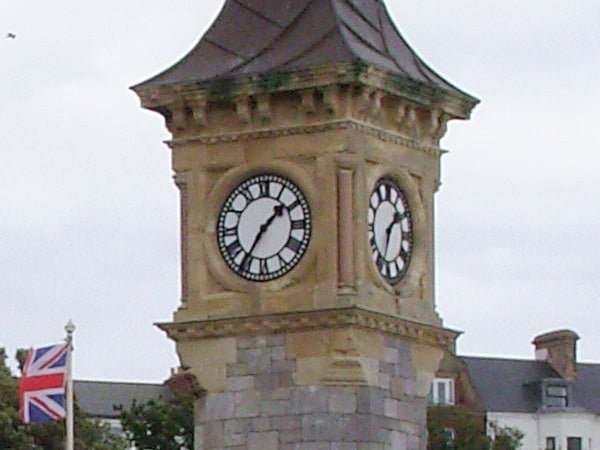 …but at least there’s no purple fringing. 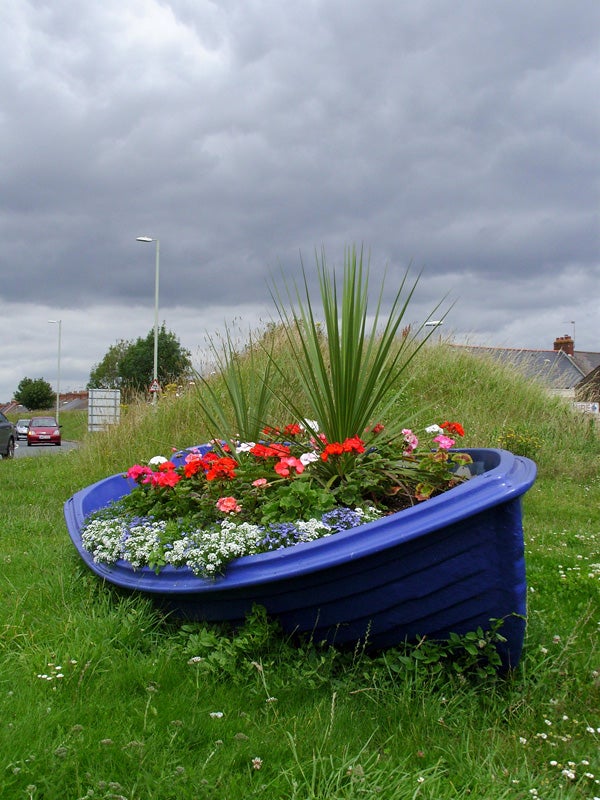