Despite a sleek design, high-quality video processing and very low input lag, the Samsung UE49NU8000 is handicapped by suboptimal motion and HDR performance.

Samsung’s Quantum-Dot-equipped ‘QLED’ TVs can be amazing – look at the new Samsung Q9FN – but they’re also expensive. For most folk looking to buy a 4K TV, the step-down NU series of LED LCD TVs are more within reach, such as the UE49NU8000, yours for £1199 in the UK.

You can expect good sharpness and colour, but inevitably for an LCD TV, there are compromises on dark performance. The sizes 55 inches and above are the best versions of this TV: the 49-inch version uses a 60Hz panel, which has some motion issues, hence the 7/10 score. The bigger sizes don’t have that problem and would score 8/10. 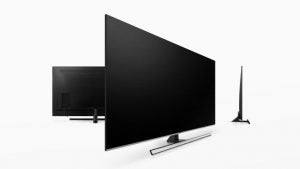 Its build quality can feel a little ropey in places, but the Samsung UE49NU8000 cuts a handsome profile. The thin black bezel transitions to dark silver along the bottom edge. The central open stand creates that sought-after “floating” appearance. The stand’s plastic finish is well-disguised by the brushed metallic along the front T-bar.

The bezel and the chassis are thicker than those found on Samsung’s edge LED TVs from last year. This is presumably because the ports are now located on the TV itself, rather than farmed out to an external box.

There are two USB sockets and four HDMI inputs, all of which are compatible with HDMI 2.0b (to support 4K HDR at a higher frame rate, chroma or bit depth) and the HDCP 2.2 copy protection protocol. Cables can be routed through the pedestal stem at the rear of the television for a tidier look. 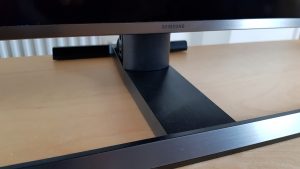 Two remote controls are supplied with the Samsung 49NU8000. One is a traditional remote with far too many rubbery buttons crammed onto a small wand. The other is an elegant Smart remote with minimal buttons and built-in microphone for Bixby-assisted voice commands.

The smart TV interface is fairly intuitive, on our review unit it was slightly laggier than previous efforts from Samsung. Also, at the time of review, the pre-installed Amazon Prime Video app didn’t support UHD HDR (although Netflix and YouTube did), while the major UK catch-up TV apps – BBC iPlayer, ITV Hub and others – weren’t available to download from the app store. Samsung tells us this will change with a future update.

Supported HDR formats include the standard HDR10, the broadcast-friendly HLG (Hybrid Log-Gamma) and the new HDR10+. Those last two aren’t particularly exciting at the moment due to a lack of content, but consider them to be a sort of futureproofing. 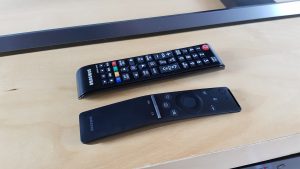 The Samsung NU8000 is a mixed bag, but we’ll start with the good.

While not as explosively vibrant as its QLED brethren, the Samsung UE49NU8000’s colour rendition looks very natural. It infuses an immersive sense of realism to skin tones, foliage and other memory colours.

Clarity and definition are great too, really making the most of the Ultra HD resolution. The TV also upscales standard- and high-definition material very well to fit on its UHD screen, incurring very little fizziness while retaining detail in a comparatively sharp manner. That’s a big deal considering the vast majority of content out there is still not in 4K. We’d say that Samsung’s up-conversion algorithm is arguably the most forgiving on the market, providing pleasing results.

Samsung UE49NU8000 excels at gaming responsiveness: we measured input lag at a record-low 14ms in Game mode, regardless of whether the incoming video signal was 1080p SDR or 2160p HDR. This will make reflex-based games such as arcades and racers a joy to play on the television. 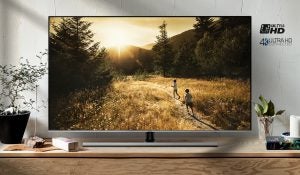 Another bonus is that you can play to your heart’s content for as long as you want without fear of causing permanent screenburn. The jury is still out on the issue of screenburn, but the consensus is that OLED TVs are more likely to suffer from it. If you’re the type to leave a static image on your TV for hours at a time, Samsung has you covered.

You also get deep blacks by LED LCD standards. That’s because Samsung generally employs VA-type LCD panels, which prioritise contrast over viewing angles. The VA LCD panel is illuminated through a single strip of LED modules along the bottom of the TV, whose light is then distributed across the entire screen via light guide plates. This approach allows for a slimmer design and lower production costs than full-array direct-lit LED televisions. 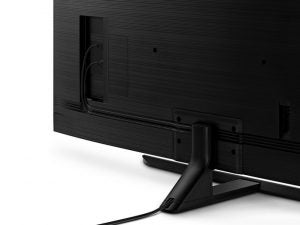 There are compromises with that approach, though. For starters, the top and bottom black bars in wider aspect ratio films can never be completely darkened whenever light is needed to depict content on-screen. It’s fine in a lit room, but they’ll look a bit grey in pitch-black rooms, especially in HDR mode.

There is also noticeable haloing, which goes all the way from the top to the bottom of the screen when bright objects overlay a black background. Deploying a small dose of ambient lighting in the room can mask these issues, although the lighting issues are amplified by HDR.

First, since backlight has to be cranked up to maximum to satisfy HDR’s high peak brightness demands, low-light sequences can take on a misty, greyish appearance, plus black uniformity issues such as clouding become more evident. Also, bright objects against a black backdrop can exhibit significant blooming that spans the whole height of the screen. Shadow detail can also look indistinct on the UE49NU8000 because Samsung’s tone-mapping philosophy favours retaining all specular highlight detail over maintaining overall brightness or APL (Average Picture Level).

That being said, bright performance isn’t an issue. Peak brightness reached 800 nits on a 10% window, and 535 nits full-field on our review sample. It’s excellent for lighter pictures that don’t need to juggle dark areas, such as live sports. 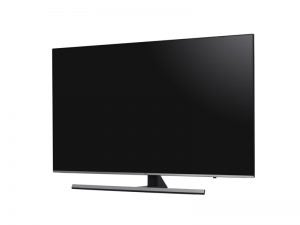 Motion performance is underwhelming on the 49-inch NU8000, owing mostly to the use of a 60Hz LCD panel instead of a 120Hz one found on larger screen sizes. The onboard frame interpolation does not affect 50Hz or 60Hz content, and so can’t be used to reduce motion blurring in fast-action sports. Engaging backlight scanning in the form of LED Clear Motion can increase motion resolution, but it results in duplicate ghost images.

Also, in 50Hz content – such as football on BBC or Sky Q in the UK – judder reduction is forced to the maximum value of ’10’ if you enable LED Clear Motion. This introduces visible interpolation artefacts, so we’d rather not turn on LED Clear Motion at all.

As for sound, the down-firing stereo speakers produce decent sound (the TV goes reasonably loud before distorting, and dialogue is clear) for run-of-the-mill viewing. However, as is almost always the case with flat-screen TVs, an external soundbar or home theatre system will provide a better audio experience if you take your movies seriously. 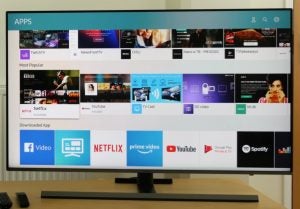 There are many things to like about the Samsung NU8000. It’s a sharp TV with good colours, with excellent video processing and a gamer-friendly super-low input lag. It’s still an edge-lit LCD model, and if lighting uniformity and contrast is important to you, you’ll want to check out the Sony XF90.

Then there’s the motion issue with the 49-inch version of the NU8000: it is let down by its native 60Hz LCD panel, which severely handicaps the television’s motion performance in a couple of key areas. If you’d still like to plump for a Samsung NU8000, then go with the 55-inch at the very least. It and bigger models will at least have a native 120Hz panel for higher motion clarity and smoother 24fps playback.

Despite a sleek design, high-quality video processing and very low input lag, the Samsung UE49NU8000 is handicapped by suboptimal motion and HDR performance.