—
This is a preview. Read our full Samsung Galaxy Note review here.
—

Admit it, you didn’t realise we needed a new category of portable touchscreen device, did you? No, nor did we. But apparently we were wrong. Samsung has just introduced the Samsung Note, a 5.5in smartphone with pen input. Unsurprisingly Samsung thinks this new category should be called the note. Either way, we got hands on to see how it performs.

Like the Samsung Galaxy Tab 7.7, this is an impressively slim and stylish device. In fact, it actually sits quite well in the hand despite its large footprint, though it is certainly too big to be a primary phone – just look at it compared to a Galaxy S II in our shots below. 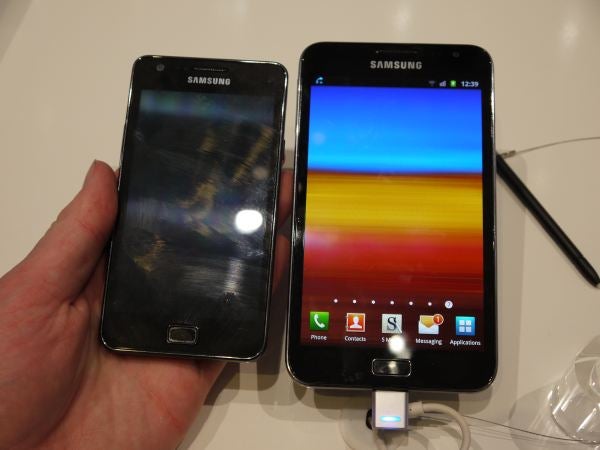 Like the Samsung Galaxy S II it has a checkered texture to the plastic back while the front is almost all glass screen, with a surprisingly slim bezel. Moreover, when the screen is locked it disappears satisfyingly into the blackness of the front glass panel. It even uses touch Menu and Back buttons that only illuminate when activated, just to keep everything as clean and black as possible. Only the Home button is a real button. 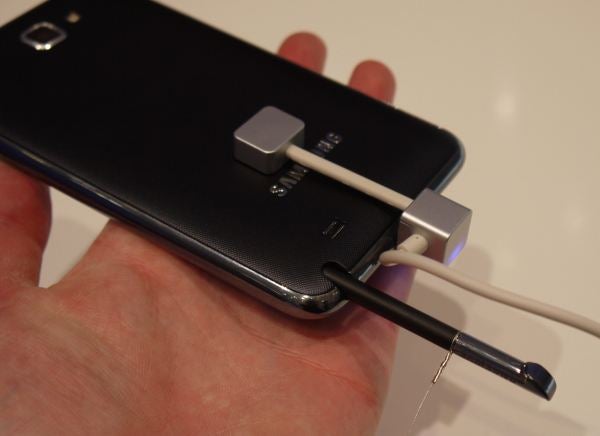 Looking round the edges, there’s a volume rocker, power button, headphone jack, microUSB socket and… a stylus. This can be used in place of a finger to doodle, take notes, or input text using inbuilt handwriting recognition software. Unlike that on the HTC Flyer it interacts with the whole phone so you’re not left having to constantly switch between finger and pointer. However, it isn’t technically as good as that of the Flyer with it offering even less pressure sensitivity – it feels like there are about three levels. Accuracy also seemed a bit off though this is quite possibly down to how it was calibrated – we couldn’t find a caibration tool. Most importantly, though, is the fact the stylus can be stored in the device, making it a convenient tool when needed but never an annoying burden. 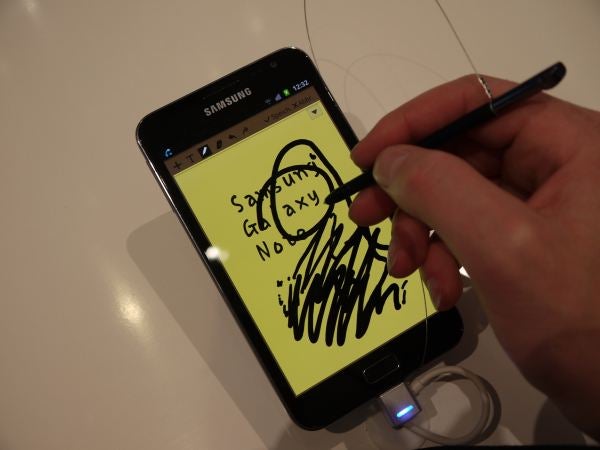 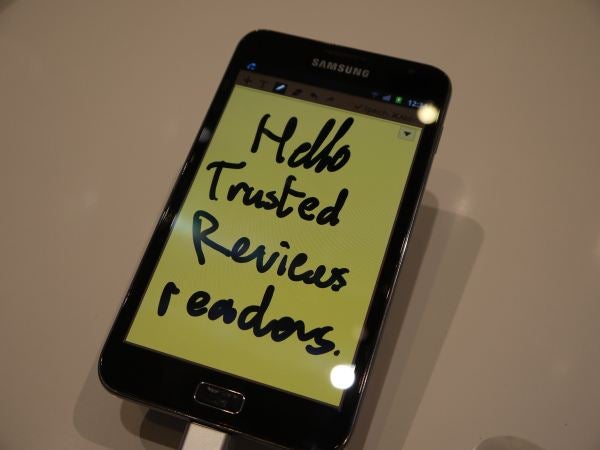 Accompanying the stylus is a dedicated app for note taking for which there’s a shortcut on the homepage. It has comprehensive tools for changing the ink size and colour and is optimised for quick and easy note taking. Indeed Samsung are marketing this as a device to replace your conventional notepad. However we simply didn’t feel it was quite up to the task, feeling just a bit laggy and inaccurate. Enough for the most basic of note taking and doodling but not as a serious tool.

—
This is a preview. Read our full
Samsung Galaxy Note review here.
—

What will interest those of an artistic pursuasion, though, is the
quality of the display. It packs in quite jaw dropping 1,280 x 800
pixels – the same as on many laptops – making for incredibly sharp
images. It’s actually still not quite as sharp as the iPhone 4 but it
offers a much larger screen and more pixels in total, and it still beats
most of the competition for pixel density. It’s also an OLED panel so
colours are incredibly bright and punchy, and viewing angles are
essentially infinite. Frankly, it’s stunning.


This of course lends itself well to all tasks but allows the Note to
excel at video playback (for which there’s extensive format support) and
gaming, both of which the 1.4GHz dual core processor rips through with
ease. That said, we did encounter a few skips and pauses here and there,
as on the Tab 7.7, so we do hope Samsung hasn’t mucked things up by
messing around with Android too much and making it bloated. 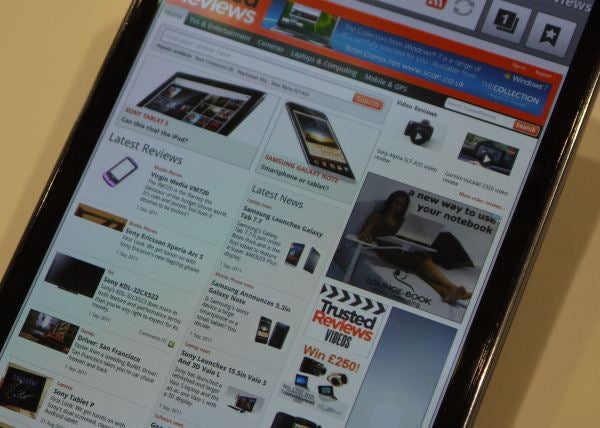 Samsung has of course also put its TouchWiz interface on this device,
which runs the 2.4 version of Android. The changes are numerous but
largely cosmetic with the addition of the note taking extras, being the
most notable. There are some neat gesture additions though. Swipe your
palm across the screen and it will take a screenshot or hover your hand
over a video and it will pause. 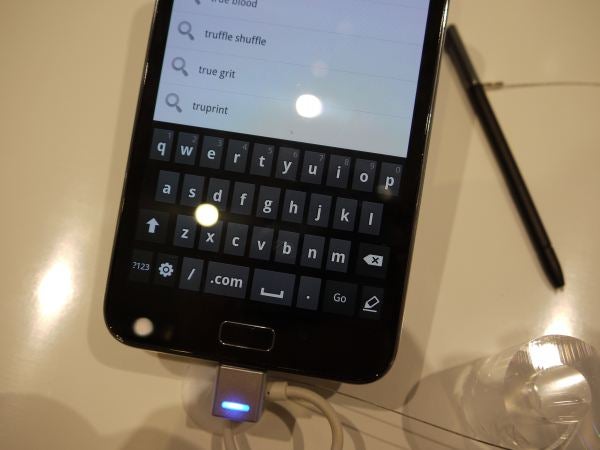 Other key stats include the choice of 16GB or 32GB of internal storage,
and a microSD slot for expanding this. This is also a proper phone so
you get all the requisite mobile connections along with Wi-Fi and
Bluetooth. Most intriguingly, though, you also get a 2,500mAh battery –
nearly double many other phones. Whether this results in double the
battery life or if it’s simply needed to compensate for the size of the
screen, we’ll have to wait for a full review to find out. 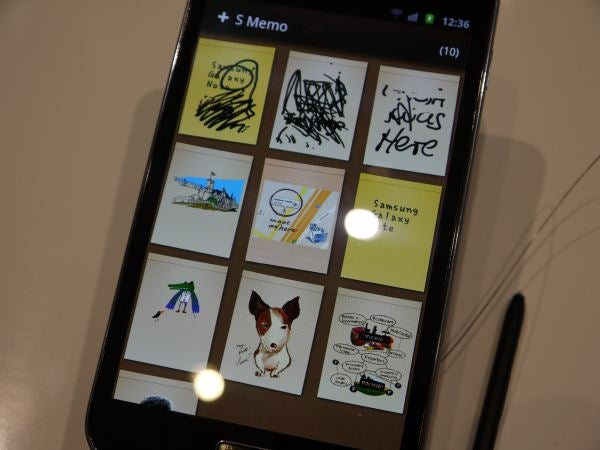 In conclusion for the time being, we’re impressed with the Samsung Note
but aren’t necessarily yet convinced it’s something we’d want to buy.
It’s patently ridiculously large to use as a standard phone and the note
taking extras seem of debatable benefit. But with such a superb screen
and impressive other hardware, it’s definitely one to look out for if
video and gaming on the move is important to you.

—
This is a preview. Read our full
Samsung Galaxy Note review here.
—