When we get a printer in for review, we usually read through its specifications from the manufacturer’s website and check typical street prices through a price comparator, like Kelkoo or PriceRunner. We were impressed to see the ML-2250, a printer with an RRP of £159 inc VAT, coming through at under £80 from a couple of discount sites.


We were further impressed when we read on the Samsung site that the printer has duplex ‘built-in’, a ‘500-sheet’ main paper tray and ‘PostScript 3 emulation’ in its controller. It was only later we discovered that these specs referred to a different printer…


The ML-2250 is a very attractive looking printer, dressed out in shiny white plastic on front and top, with the sides and back a very pale grey. There’s a slightly odd bulge running the full width of the back, enclosing the power supply and input circuitry, so the printer has a larger footprint than appears at first sight.


An A4 paper tray sitting under the printer can actually take 250 sheets of 80gsm paper, and printed sheets roll out, face down, to the top surface. A multi-purpose tray unfolds from the front panel to take envelopes, card or a further 50 sheets of paper. 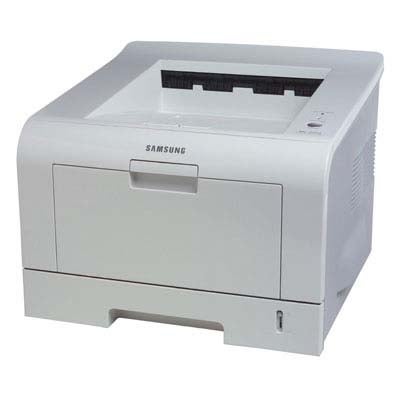 To the right of the output tray are two indicators, one to show when the toner save function is engaged and the other, a dual red-green led, to indicate on-line and error conditions. A single button is used to engage toner save and this is a useful addition for internal documents, rather than having to root around in the printer driver. At the back are parallel and USB 2.0 sockets and an extension socket for the optional second feed tray, which can again take 250 sheets. Other options include network adapters, for Ethernet or Ethernet and wireless connection.


The combined toner and drum unit slides in very easily, once you’ve raised the cover at the top of the front panel. This is the only consumable, making the ML-2250 a low-maintenance device.


The Windows GDI driver installs by default from the software CD, but there are also drivers for PCL. If you need to print PostScript files, PostScript 3 is available as an optional extra on a plug-in DIMM.

The GDI driver includes multi-page per sheet, watermarks and overlays, but there’s no reference to duplexing, other than printing only-odd or only-even pages. This is an aid to manual duplexing, but is something virtually every laser printer can do. Very oddly, the user guide shows a duplexing option in the Linux driver, but when you load it up, this remains permanently greyed out.


Test times from this printer depend very much on whether the machine is sleeping or not. For example, the high resolution photographic print took a fairly lethargic 46 seconds the first time the waking ML-2250 printed it, but only 16 seconds on each of the subsequent prints, made in quick succession. The five page text print took 26 seconds, giving the printer an actual page rate of 11.5ppm, some way short of the quoted 24ppm, though that quote is for draft print. 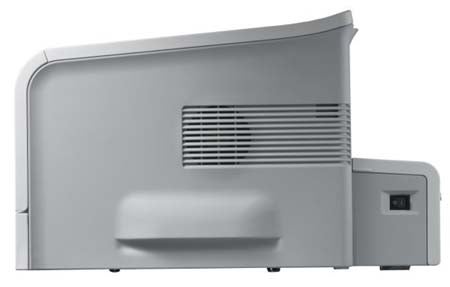 Print quality, for a personal laser in this class, is very good. Text comes through clean and sharp at the default 600dpi and is more than adequate for personal or office documents. When we moved to the text and business graphics page, we were just as impressed, as areas of tint were generally smooth, with only slight banding in the darker shades.


Even photographic reproduction, not the primary task of a mono laser, was well handled, though some shading was a little more noticeable than expected, given the printer’s top resolution of 1200dpi.


Samsung quotes a cartridge rated at 10,000 pages on its website and one of its main dealers puts a price of around £130 on it. However, this is more than the price of two 5,000 page cartridges at discount prices so, unusually, we used the smaller cartridge to calculate running costs. The printer comes with this 5,000 page consumable, which Samsung refers to as a starter cartridge.


Using the discount price in calculation gives a cost per page of 1.49p, reasonable for the class of printer. If the 10,000 page cartridge becomes more generally available at discount prices, you could well improve on the cost, too.


So, how does the ML-2250 compare with Samsung’s description? Even with its smaller paper tray, lack of a built-in PostScript interpreter and missing duplex facility, it’s still very good value at around £80. It’s just a shame the company didn’t check its own website a bit better. On the other hand, if it had had PostScript and duplex as standard, it would have been a 10/10.