A Samsung representative described the ML-1630W as based on the design of a Steinway piano. That’s a new model of Steinway piano about the size of a vinyl record deck, cased in black plastic and containing a mono laser printer engine rather than all those outmoded strings and hammers, then… but it’s true they’re both glossy and black.


This is from the latest round of Samsung designer printers, for those who want to bring their peripherals out of the office under the stairs and onto the drawing room workstation or high street office desk. Looks are a big part of the appeal of the machine and it’s certainly a stylish design. 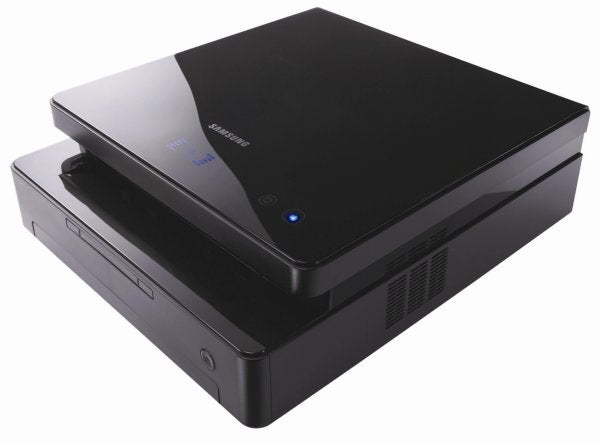 Its gloss black case has a distinct step at the front, down to the ‘keyboard’, which is actually where the paper comes out. This is a very low-profile machine, but has a rather bigger footprint than at first appears. Unless you want your documents to end up on the desk or floor, you need to attach a clear plastic paper support to the front of the printer, which alters its looks enough to be excluded from any of the publicity shots.


Controls are reduced to power and job-cancel buttons, which are touch buttons on the ML-1630W’s top surface. The status display is a matrix of 13 x 5 blue LEDs, supplemented by four, purpose-designed icons for error, paper, toner and paper jam. As well as displaying large, animated symbols and arrows, the blue LEDs show simple messages, such as ‘OPEN’ when the top cover is opened. The printer also emits a series of ringtone-style beeps when issues are resolved or print jobs finish.


A push button on the front face of the printer releases a spring-loaded paper tray. Samsung refers to this as a 100-sheet tray, but this is only for 75gsm paper, lighter than normal multipurpose office stationery. We reckon 90 sheets is a more realistic figure. Either way, it’s a low capacity for a mono laser, unless your needs are very modest. 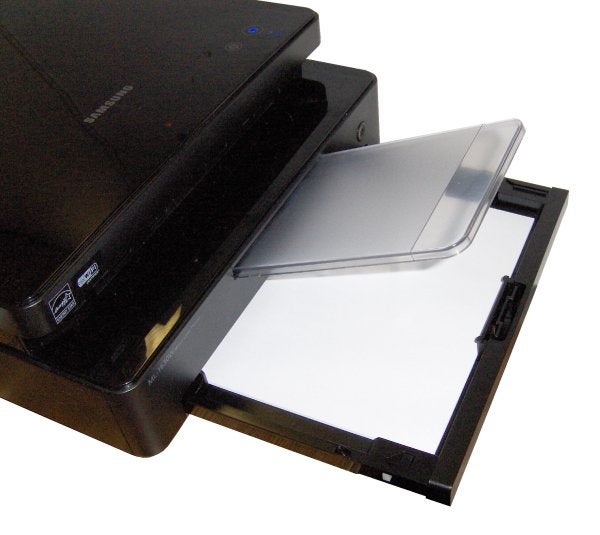 At the back are sockets for USB, Ethernet and Wi-Fi – it’s unusual to find these three as standard on a printer costing around £100. Wireless connection is easy to achieve, as the setup routine provides for both local and network connections.


Physical setup is also straightforward. Lift the top half of the printer up and the combined drum and toner cartridge slots into the bottom section of the printer from above. This is simpler than having to locate a cartridge from the front and slide it into place.

Once everything is installed, printing is quick and quiet. Samsung claims a top speed of 16ppm for the ML-1630W, but our five-page text print completed in 32 seconds, equating to 9.38ppm. With longer documents, like our 20-page document, it gets closer to the claimed speed – taking 1:33 for a speed of 12.9ppm.


Even with this reasonable turn of speed, the printer is generally much quieter than most entry-level lasers and although the quoted 45dBA is rather optimistic – we measured peaks of 54dBA during paper feeds – the sounds are not intrusive and we’d be quite happy to have this machine printing alongside us while we worked.


With all the focus on style, you might expect print quality to be something of a secondary consideration, but that’s not so. Text print is sharp and precise and even at the default 600dpi resolution, there are no signs of jagged edges or curves. 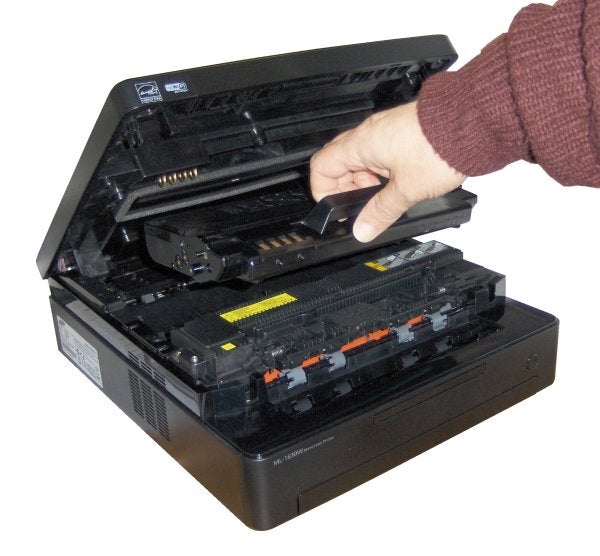 Greyscale prints are well engineered and give smooth fill patterns, with the tones we printed proving easily distinguishable from one to another. Indeed, the printer produces remarkably little in the way of banding or other irregularities that can sometimes make mono laser prints look less than professional.


Even the test photo print, often a challenge for a mono laser, reproduced well, again with little banding and smooth transitions from dark to light tones. There was even a commendable amount of shadow detail, which can often blend to black in mono prints.


There’s only one consumable in this printer, a 2,000-page combined drum and toner cartridge – though Samsung includes a 1,000-page (s)cheapskate(/s) starter cartridge in the box with the machine. We couldn’t find a standard cartridge for less than £56, which gives a cost per page of 3.6p. This is the highest page cost we’ve seen in a mono laser for a year or more and is obviously one way Samsung is recovering the low asking price of the machine.

There’s little doubt this is about as smart, neat and stylish as a mono laser printer gets. It’s not all about style, though and the print quality from the ML-6130W is as good as from any entry-level laser we’ve tested. It prints quite quickly, too and is commendably quiet. Having networking, both cable and wireless, in a laser printer at this price point is a bonus.


It’s not all good news, though, as running costs are higher than for most of its competitors and the limit to 90 or so sheets of paper in the feed tray could well make it fiddly to run, unless you only print occasionally. On balance, though, it’s still worth our recommendation, particularly if the look of the technology you buy is particularly important to you.