There’s little doubting that Samsung produces some great mobile phones and a huge range of them. It has pushed at the megapixels envelope, been one of the leaders in producing touchscreen handsets, and, for the more business-minded, produces a fair few smartphones, too.


However, the company also tries its hand at other kinds of innovation, and the Beat DJ, is an example. This is a mobile aimed unashamedly at music fans. Not exactly a novelty in itself, but the innovation/gimmick comes in the presence of a virtual turntable for scratching and adding effects. 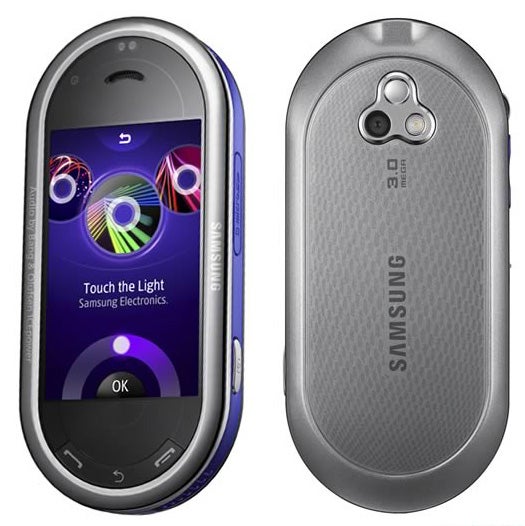 Lozenge shaped and with nicely rounded corners, the handset’s quite severe curves make it look smaller than it really is, but it is still pretty tidy for a fully touchscreen mobile at 112mm tall, 51mm wide and 13.9mm thick. It is light, too, at 98g. There is a silver frame all around the front of the phone, the backplate is silver, and the edge is a band of brilliant, bright blue.


There is no physical keyboard. Call, End and Back buttons sit in the bottom curve of the frame. At 2.8in across the screen is a little on the small side for a fully touch-reliant phone. It delivers 400 x 240 pixels, making it quite sharp, and the AMOLED technology makes the screen eminently readable.


The user interface will be familiar to anyone who has seen a touchscreen Samsung mobile recently. The widgets system is brought into play – you drag these onto the main screen from a side bar and they give access to things like contacts, music playback control, date and time, Facebook and YouTube Web links, and so on.


I’ve said before that I find the widgets idea clever but the icons too large. On this relatively small screen that’s more apparent than usual and generally just three will fill the available space. You can stroke upwards to get another screen’s worth of widget space, though.

Flick a finger horizontally across the main screen right to left and you’ll get to the main menu, grid style. Flick left to right and you get to contacts. This is not a circular system. You have to flick the right way for the right menu.


The small screen makes entering text a challenge. The screen is an unusual format being considerably wider than it is tall. There is an accelerometer that automatically rotates the screen as you turn the handset around, but it doesn’t work when you are entering text. 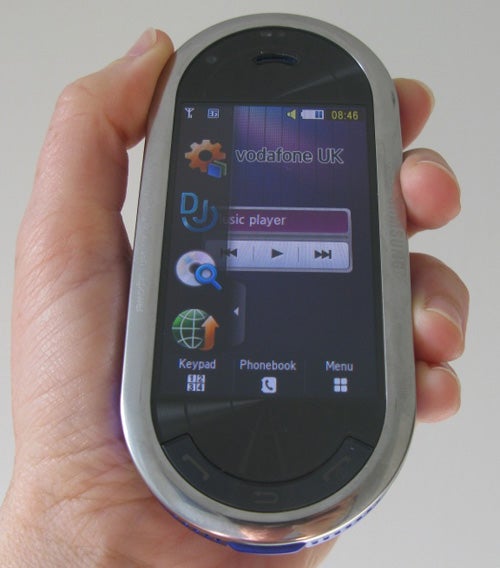 There is no wide format QWERTY keyboard, so text entry relies on a smallish keypad that takes a standard phone format. T9 text entry is okay and I found it responsive enough, but if you are a fast or frequent texter, or have stubby fingers, you may find it frustrating.


Fortunately the accelerometer does work with the web browser. There’s no pinch zooming here, but you can call up a slightly fiddly slider for zooming and the accelerometer gives you a wide view that makes good use of those 400 pixels of screen width. As this is a handset with HSDPA support to 7.2Mbps, web pages load fairly quickly.


The handset has no front camera for video calling. The back-mounted lens shoots stills at 3.2 megapixels. There is an LED flash, but it’s only good for fairly close work indoors. Our usual test subject, the coloured dish photographed under ordinary household lighting, is fairly clear and sharp. The chair, photographed with some high sun and shadow running across it is also fairly sharp, though overexposed where the sun has hit. The flowers are clear and their colour reproduction is spot on. 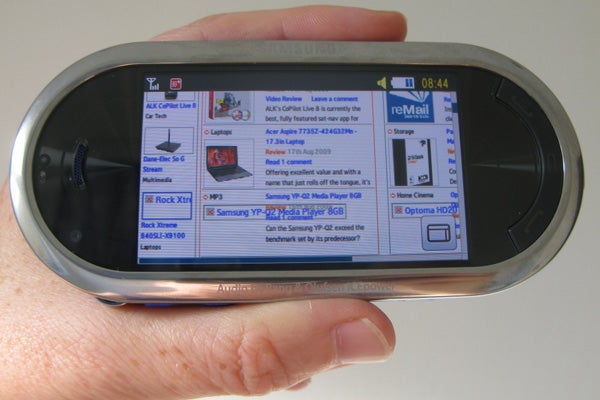 There is GPS built-in and Google Maps is included to take advantage, but you can’t geotag photos and I found the two-stage focus-shoot side button less positive than I’d like.

Then we come to the USP of this phone, its music features and particularly the Bang and Olufson’s ICEpower technology. When it comes to storage, of music or anything else, the 50MB built-in is a start, but you’ll want to make use of the microSD card slot on one edge for adding more memory.


Music playback is loud through the handset speaker, though not especially wonderful in quality terms. The Bang and Olufsen ICEpower technology comes into its own when you use the headphones. Here both equaliser and sound effects work well, allowing you to find a sound that suits your palette.


The two-piece headset is 3.5mm at the phone end, with the jack top mounted where it can’t snag your pocket. Round in-ear buds provide for good sound isolation from the outside world, and the 3.5mm jack past the mike means you can substitute a better headset if you choose. All of which proves Samsung can get the technicalities of headphones right on all counts when it wants to. 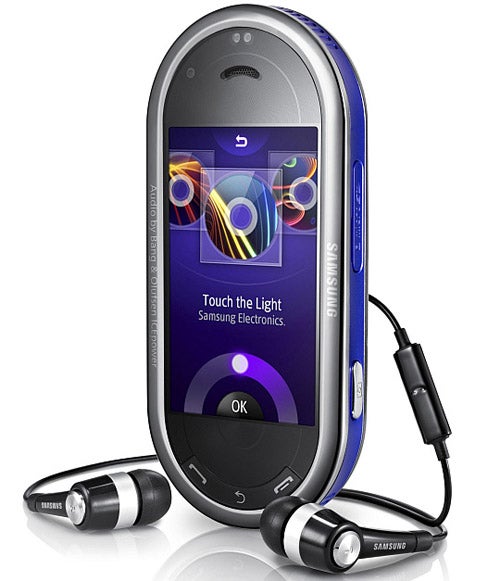 From the music player there is a touch icon that links you into the music editing/scratching suite. This sits in wide screen mode. You scratch your track by dragging a turntable clockwise and anti-clockwise. You add samples choosing from a list then dropping them in where you want. You can also add filters to the music by choosing them from a menu then dragging around the turntable to apply them at the rate or speed you want.


It is fun. For about five minutes. You can’t upload your own samples, fiddle with how the pre-installed ones work, or even merge two songs into one. Some people have complained about slow touch-screen response on this aspect of the phone in particular, but I found it fine and it’s not as if you’ll use it often enough to care.


A handset like this really needs good battery life and here Samsung has hit a snag. I did my usual battery rundown test, asking the phone to play music non-stop from a full charge through the loudspeaker. Total life was fairly impressive at 10 and a half hours, but music playback stopped after just a shade over 6 hours, which is pretty average. Probably not surprising, though, given the 960mAh battery Samsung has chosen.


There’s another plus in DivX and XviD support. I played a couple of movie trailers smoothly and with good sound reproduction. The accelerometer lets you switch readily to wide screen mode and functions full screen.


Samsung’s music editing/scratching idea is quite well implemented, but it is a bit of a five-minute-wonder. Battery life is too short and for a music centric handset, too, but the quirky physical design will win it some friends. 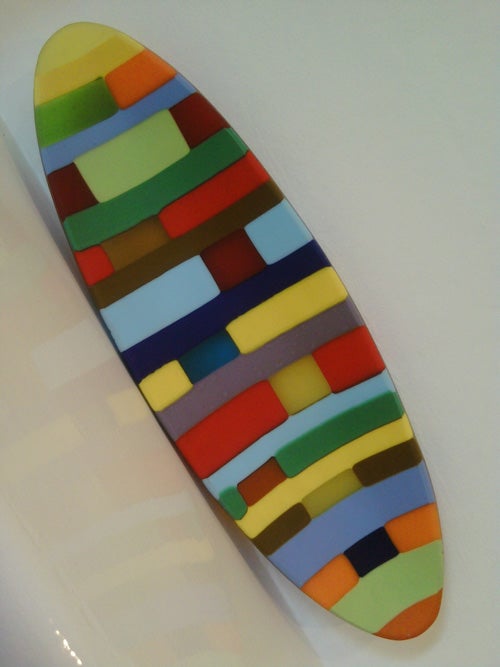 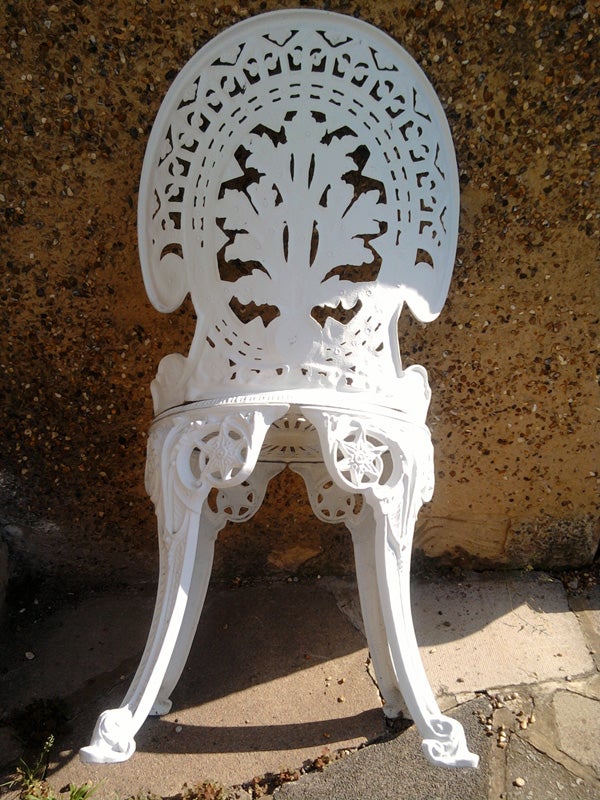 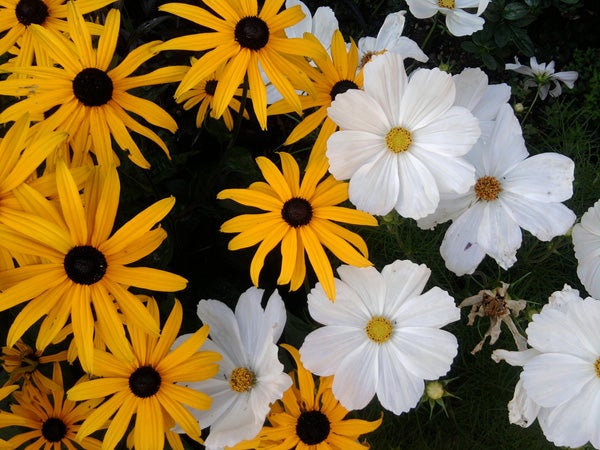