Towards the end of last year I reviewed some cameras from Samsung’s NV (New Vision) range of digital compact cameras, including the NV3 and the NV10. I was pretty impressed by their combination of stylish design and technical innovation, especially considering the sometimes rather boring and ungainly cameras with which the Samsung brand had previously been associated. Lovely though the NV range is, it makes up only a small part of Samsung’s enormous product range, which now includes no fewer than 36 different digital camera models. Compare this with Fujifilm and Nikon who both have 24 models, or Canon who have 23. 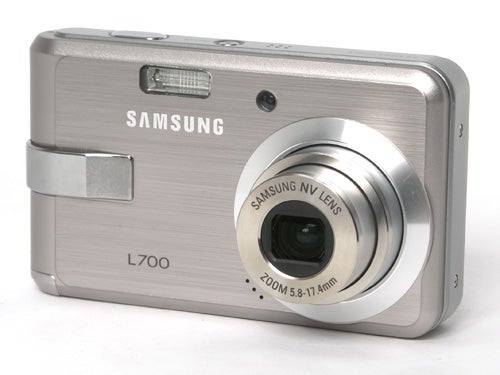 This huge range is divided into six categories; SLR, Advanced, NV, Slim, Premium and Point-and-shoot. Today’s review camera is from the middle of the Premium range, the 7-megapixel 3x zoom L700. 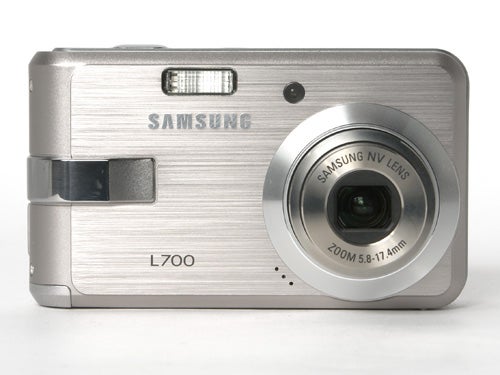 While it’s nowhere near as ugly as some older Samsung models, such as the Digimax V40 or V50 from 2004, the L700 lacks the visual impact of the NV range models. It is housed in a fairly plain metallic aluminium body with a brushed finish on the front, although it is also available in black. The shape is a plain rectangle, with the right-hand end rounded off. It is quite slim, measuring 96.9 X 56.8 X 20.5 mm, and at 130g it is light enough to carry in a shirt pocket. The 3x zoom lens retracts fully into the camera body, and there are no protruding controls to snag on pocket linings. The fit and finish of the body and controls are very good, and while the camera feels light it doesn’t feel flimsy. There are one or two styling touches carried over from the NV line, such as the textured strap lug that doubles as a thumb grip.

In terms of competition, although it is part of Samsung’s Premium range the L700 doesn’t quite match up to the benchmarks of premium compact cameras, Canon’s IXUS range or Panasonic’s FX series. It is closer in specification to some of the mid-range models, such as the Olympus FE-230 (£129), the Casio Exilim EX-Z75 (£149) or the Pentax Optio M30 (£149). Since the L700 costs around £125 this makes it pretty good value for money. 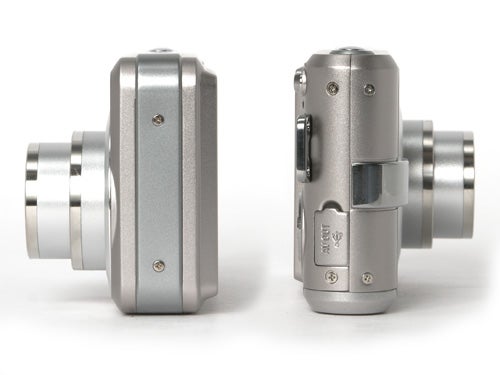 The L700’s specification is pretty basic. It has none of the bells and whistles found on many modern compacts, such as image stabilisation or face detection. What it does have is ISO 1600 sensitivity, spot metering, adjustable colour balance and sharpness, and 11 scene modes. It also has a reasonably sophisticated video mode, with MPEG4 file compression giving 44 minutes of recording on a 1GB card at VGA resolution and 30fps. Unusually for a pocket compact it also allows the use of the optical zoom while shooting, although the zoom motor can be clearly heard on the soundtrack. There are a number of other options in playback mode, including a slideshow with three different selections of bland elevator muzak.


The menu and control system is versatile, but remains easy to use. Pressing the adjustment button brings up a small mini-menu for adjusting ISO, white balance, RGB colour balance and exposure compensation. The main menu is also straightforward, with the various options scrolling across the top of the screen and the menu choices arrayed below. There is also a mode button which allows quick selection of movie mode, full auto, program or scene modes. It’s not as quick or as clever as the Smart Touch control system on the NV10, but it isn’t at all bad. 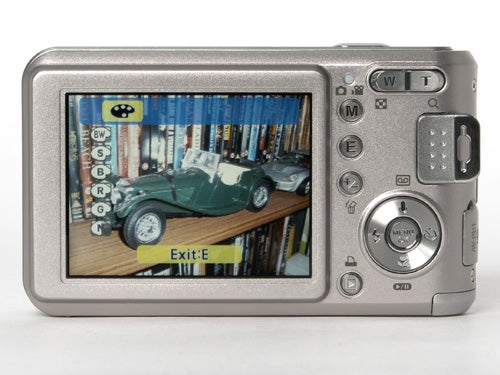 The camera’s performance is adequate, but not particularly brilliant. It starts up in just under two seconds, which is acceptable for a camera in this class, and the autofocus is reasonably quick in good light. Despite the presence of a seemingly adequate AF assist lamp however, focusing in even slightly low light is very unreliable, usually simply announcing “Low Light!” with a big banner across the monitor. It will still take a picture in this situation, but it may not be focused correctly.

In continuous shooting mode it can only manage a frame every 1.3 seconds, although it will keep this up until the memory card is full. Unfortunately it only focuses on the first exposure, so if you’re trying to keep up with a moving subject then some of the subsequent shots may be out of focus. 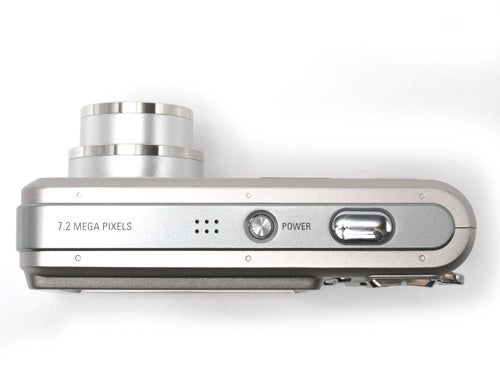 The camera is powered by the same 860mAh Li-ion rechargeable battery as the NV3. Samsung makes no particular claims for its durability, but I took well over 300 shots on a first charge and the charge meter was still reading two-thirds full, which does indicate exceptionally good battery duration.


The L700 uses fairly heavy file compression, producing maximum-quality JPEG files averaging around 2.6MB, which is quite small for a 7MP camera, but does mean that a 1GB SD card is enough for around 307 shots. 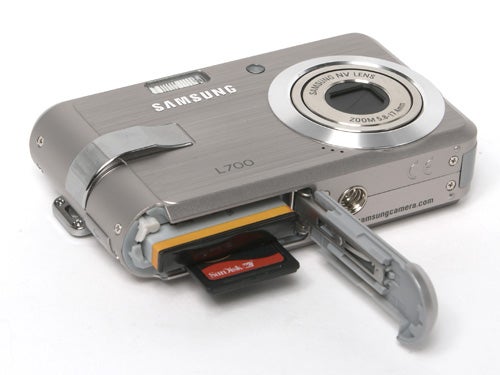 Picture quality is, unfortunately, one area where the L700 is rather below average. I took it out for a test shoot on a bright sunny spring day, exactly the sort of conditions under which a camera like this would be used for holiday snaps, and I found the results to be disappointing. Almost every shot was over-exposed, colours were under-saturated and highlights blown out. As well as this colour reproduction was inaccurate, with reds looking very orange. Setting exposure compensation to -2 helped a bit, which indicates that the exposure meter was possibly wrongly calibrated. I also found image noise increasingly problematic from 400 ISO upwards, with the maximum 1600 ISO being unusable for anything but low-grade snapshots, but then this is nothing unusual for cameras in this class.

With the L700 Samsung has produced the very definition of an average 3x zoom digital compact camera. It has no real weak points apart from its poor low-light focusing and over-exposure in bright light, but little about it stands out either. It is well made, performs adequately, has all the features and options you really need and takes reasonably good pictures. It is also reasonably good value for money, but it lacks the style or innovation of some other recent Samsung models. 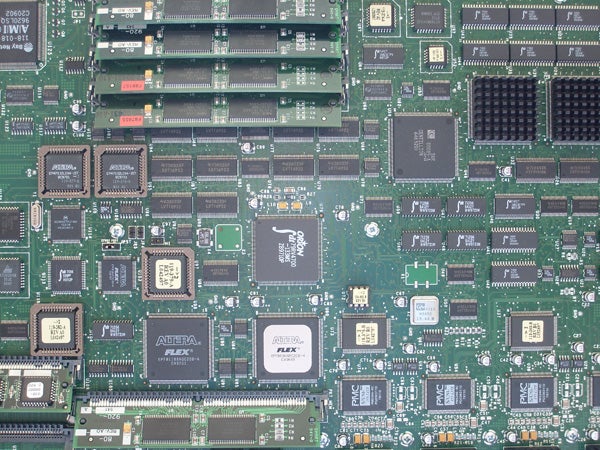 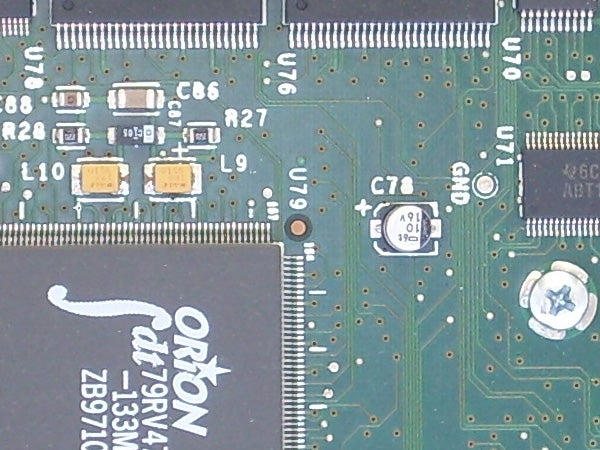 At 50 ISO the image is clean and free from noise, but it is over-exposed and lacks contrast. 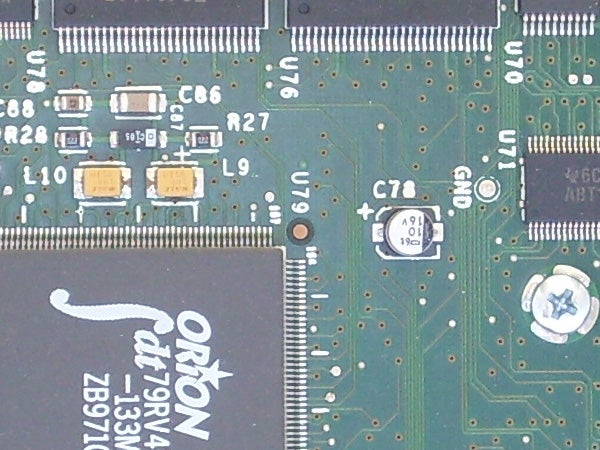 At 100 ISO the results are very similar to the previous shot. 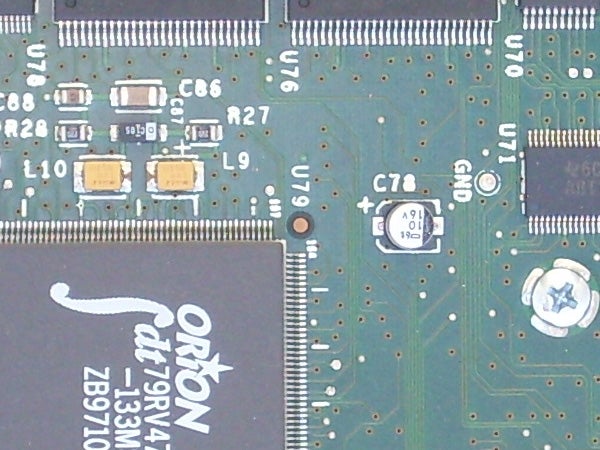 Some slight colour speckling at 200 ISO, but the noise level remains low. 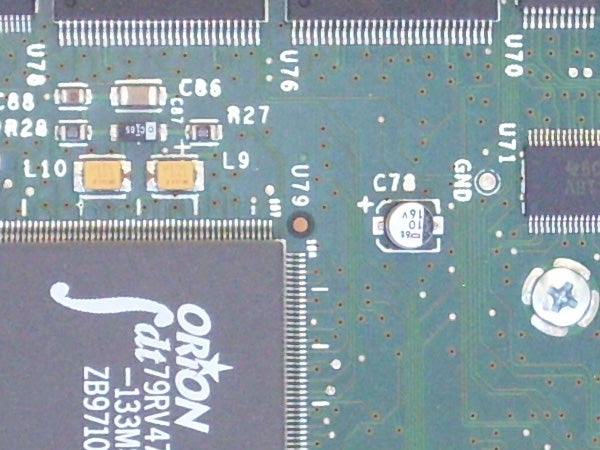 At 400 ISO some noise is visible in the darker areas of the image. 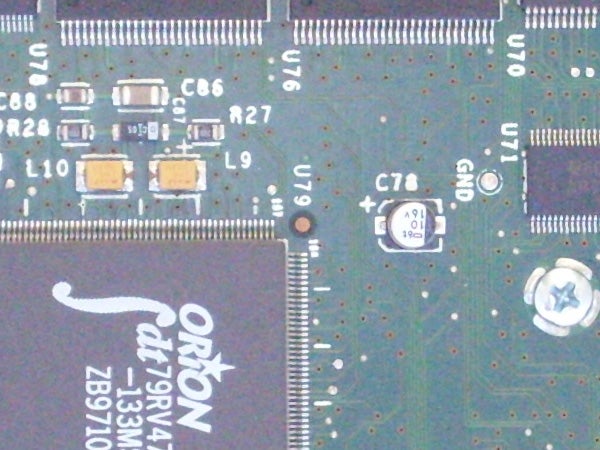 At 800 ISO the noise has wiped out quite a lot of fine detail. 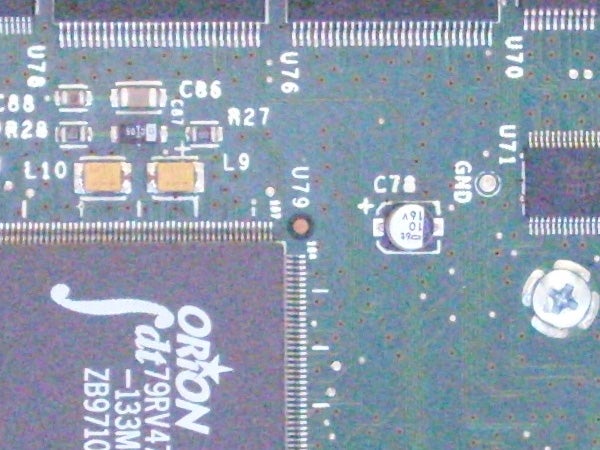 At the maximum 1600 ISO the noise is now quite severe and image quality is greatly reduced. 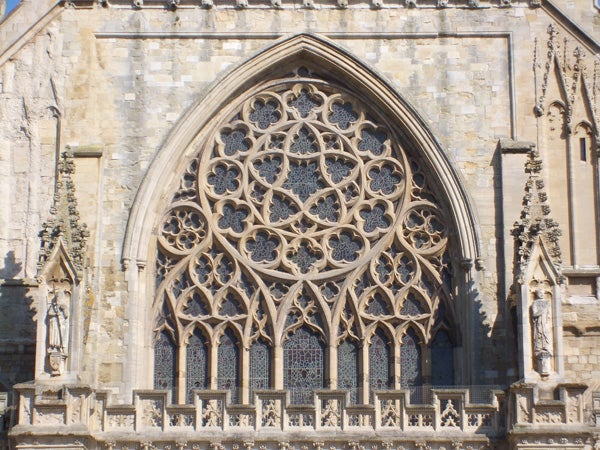 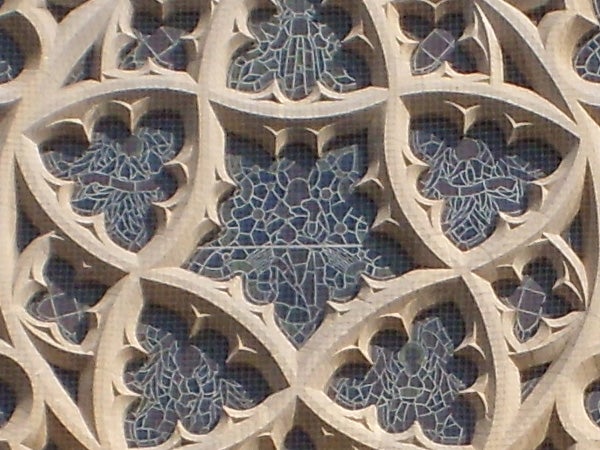 This is a full-res crop from near the centre of the above image. Compare this with the same shot from other reviews. 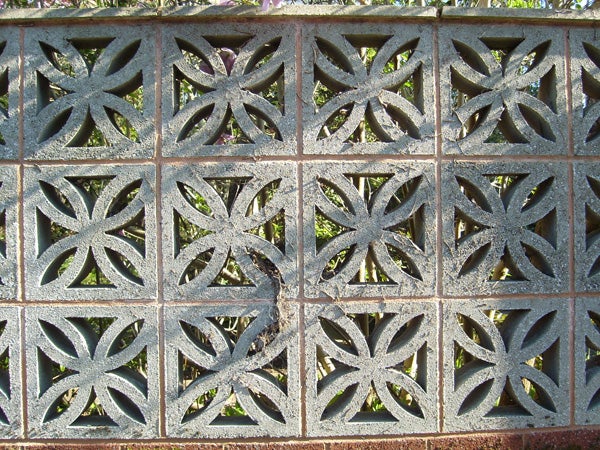 The L700’s lens isn’t up to the standard of some other recent Samsung cameras, and produces significant barrel distortion at wide angle. 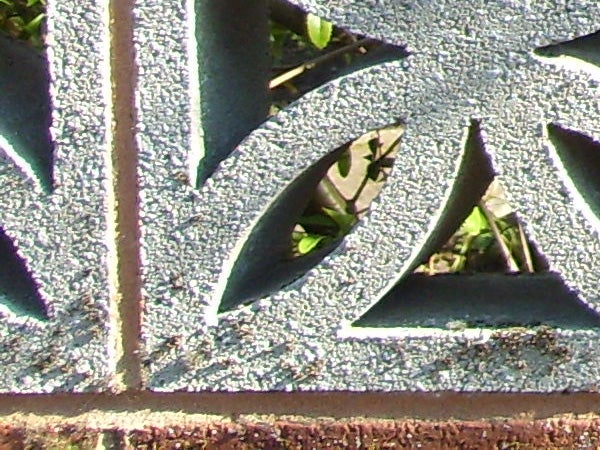 This is a full-res crop from the corner of the above image. Corner sharpness isn’t too bad, but the highlights are blown out from over-exposure. 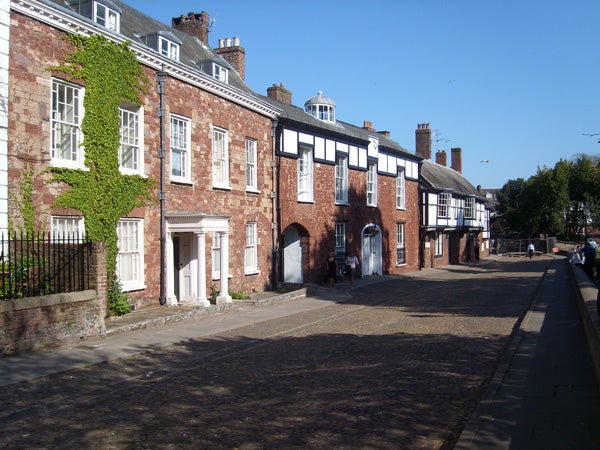 This was taken at the wide end of the zoom range, equivalent to 35mm. 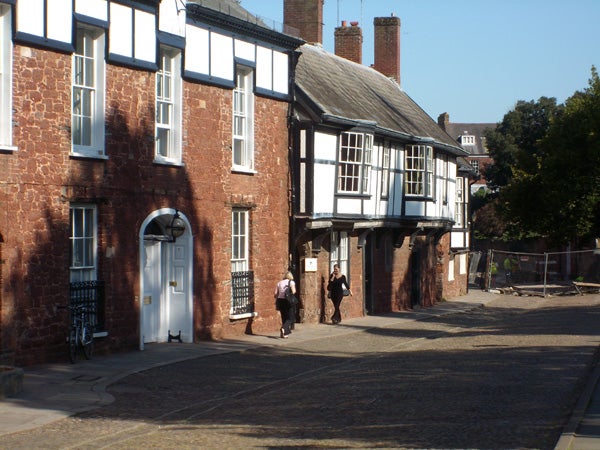 Zooming in to the 105mm-equivalent telephoto end looks like this. 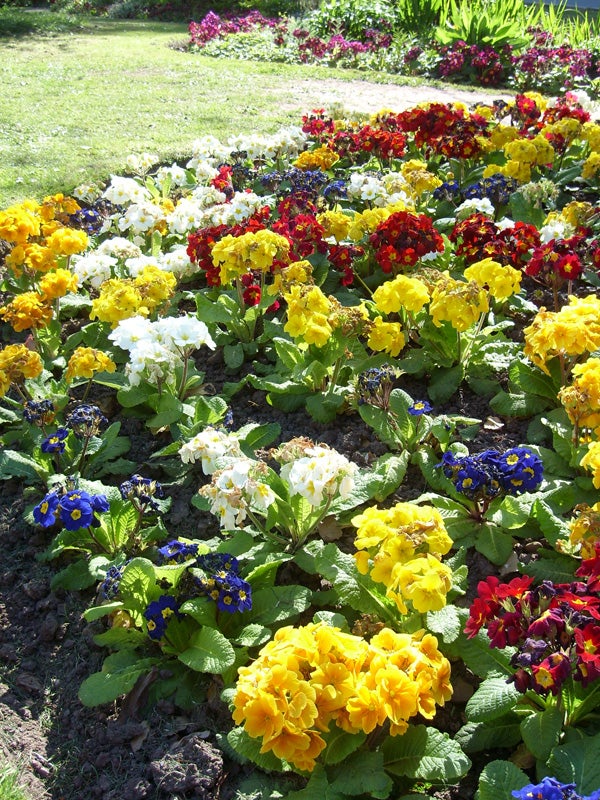 The colour reproduction would be a lot better if the shot wasn’t badly over-exposed. 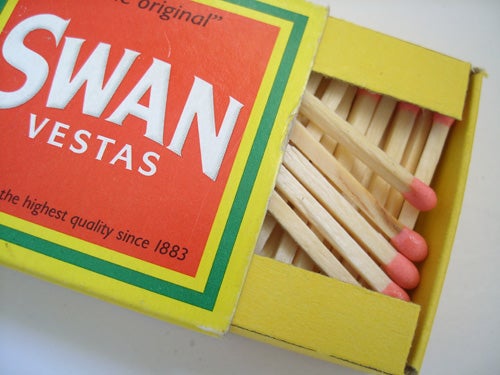 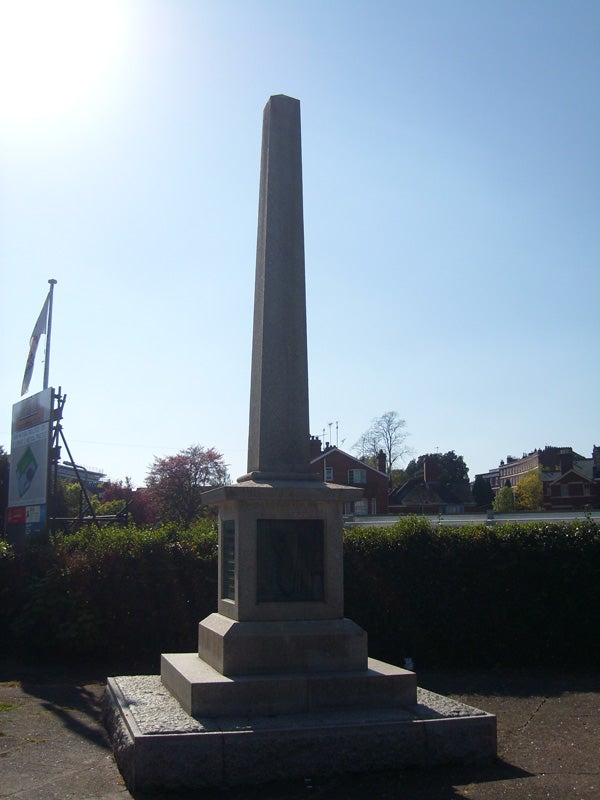 Shooting into the light, the chronic over-exposure of the metering system actually works to our advantage, brightening up the shadows.