Well, here it is. The first 8-megapixel cameraphone to make it to the UK. Samsung, with its i8510 (also known as the Innov8 outside the UK), has pipped Sony Ericsson to the post.


I should say right at the outset that my review sample was not a final boxed unit but a very late pre-release sample. I should also say that it boasted 16GB of internal memory and is available from Orange and O2. The 8GB version is exclusive to Carphone Warehouse.


I’ll get to the camera later on, but first it is worth looking at what else is going on here.


You might have thought S60 was the domain of Nokia and Nokia alone, but it pops up here in its 3rd Edition with Feature Pack 2. Outwardly, the software looks rather different to that on a Nokia phone thanks to a custom user interface, but as you dig around the menus and applications you see that it is S60 to the core. 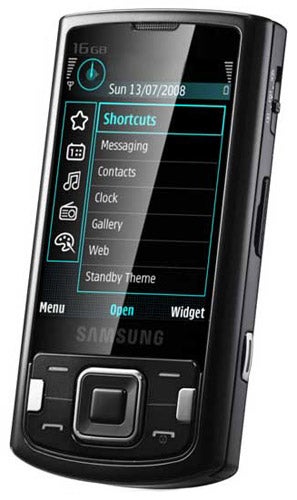 Essentially, the presence of S60 makes this both a multimedia capable phone and a competent smartphone. Both factors are enhanced by all that built-in memory for storing stuff and by the large screen. At 2.8 inches, you won’t beat it for size on an ordinary mobile and it is clear, sharp and crisp, though I think it would have benefited from more than its 320 x 240 pixels.


It is perhaps no surprise that the i8510 is being compared to Nokia’s N95. Not so much the original version but the improved 8GB one.


But I reviewed the N95 8GB late last year, and a whole heap of stuff has happened in the mobile phone world since then, which the i8510 reflects nicely. 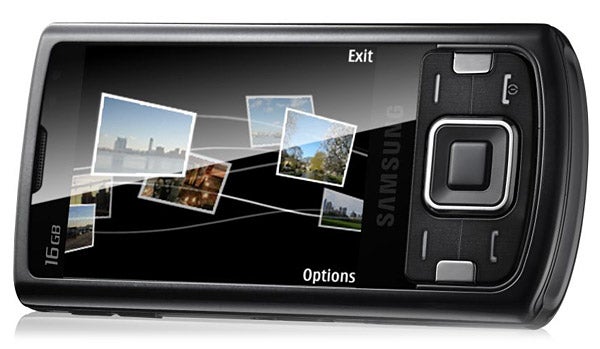 This is a quad-band GSM phone with GPRS and EDGE as well as 3G to the illusive speed of 7.2Mbps. GPS, Wi-Fi and Bluetooth are all here too, and the Web browser is competent – there’s even an accelerometer for flicking the screen into wide mode for better browsing (and other stuff). The 16GB (or 8GB) of memory can be augmented by microSD cards, and the slot is under a cover on the right edge of the phone. There’s a TV-Out feature too, though I didn’t get a cable with which to test this.

The phone is a slider and it is a bit chunky in the hand and pocket. Indeed, it rivals my HTC TyTN II for size. For the record, it is 106.5mm tall, 53.9mm wide, 17.2mm thick and 136g. It grows to about 147mm when the slide is opened. The slide mechanism is smooth, but if you’ve smaller hands you might find, as I did, that the phone is a bit unwieldy for one-handed use.


The slide hides a very usable flat numberpad, clear key and two programmable shortcut keys. Presets are present to link you into the music player and RealPlayer. 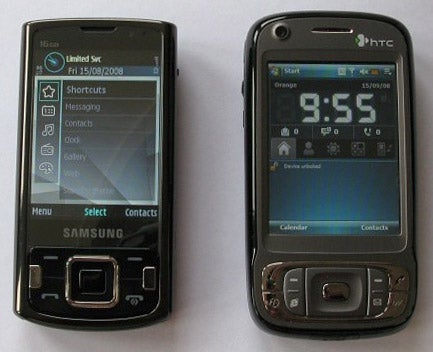 With the slide closed, two softmenu keys and Call and End keys are supplemented by a pair of keys, one of which takes you to the handset menu and the other to the S60 Gallery where you can view images and video clips, get to streaming links and drop into the music player.


With the slide closed or opened the D-pad can be used in the usual way or swept with a fingertip for fast scrolling. It is quite an effective system once you get used to it, and particularly good for Web browsing. 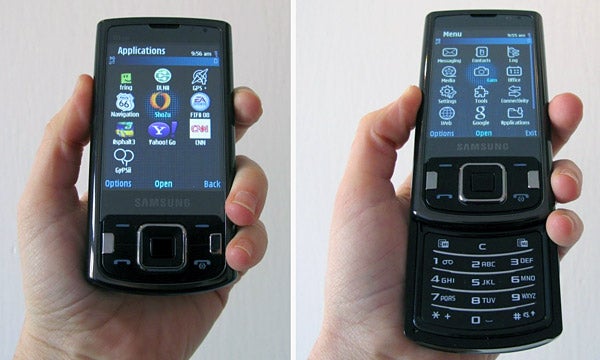 I’ve mentioned music now. The player is competent and there is a 3.5mm headset jack on the left edge of the phone. I’d have preferred it to be on the top, but at least it is 3.5mm. As a fan of classical music, I’m really happy that the Composer tag is supported. An FM radio caters for those times when your own music doesn’t meet your needs.


This not being a final handset I didn’t think it fair to do a full battery rundown test on music playback. Samsung reckons you’ll get 8.5 hours of GSM talk, 310 on standby, which is an amazing claim for a mobile. I must have spent half an hour on the Wi-Fi and a couple of hours listening to music and got to the end of a full day with plenty of juice remaining. This phone should easily see you through a day between charges unless you are really heavy on it.

So, what about the camera, then?


Well, its 8-megapixel sensor is only part of the story. There is no optical zoom, which is a pity, and the flash is dual LED rather than Xenon.


When you start the camera software running by pressing a side button, the lens cover snaps aside. It pops back when you stop using the camera. This is a small touch but it gives the i8510 an air of quality. 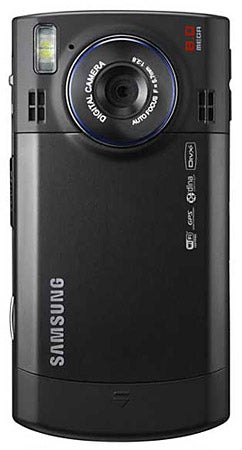 There’s a macro mode, and the ”Sempervivum” plant was taken using this at a range of about 5cm, with the result being rather good. As for my other standard test shots, the coloured dish is sharp and accurate and the chair is uniformly white with well-captured detail.


I took the opportunity to grab some shots of the latest feline addition to the household, Angus. These photos display nicely the camera’s sharpness, and his colouring is spot on. However, I had to discard more photos than I kept thanks to considerable shutter lag. 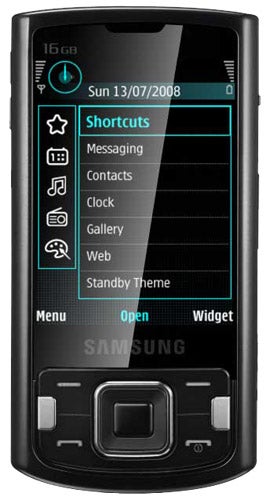 Smile detection, face detection and blink detection should help with portraits, and you can geotag images. Panorama mode lets you move the phone round while it shoots a sequence of photos automatically. It is very clever and I’d like to see it on more phones, but it only works at 640 x 480 and 320 x 240. A side button flicks you between camera, movie and gallery modes, and you can edit both movies and stills.


The i8510 is certainly packed with features and it handles well. It is large for the pocket, but the image quality of its camera is splendid. That said, shots aren’t exponentially better than you’d get with a top-grade 5-megapxiel cameraphone, so don’t be lured in purely by the headline-grabbing 8-megapixels. 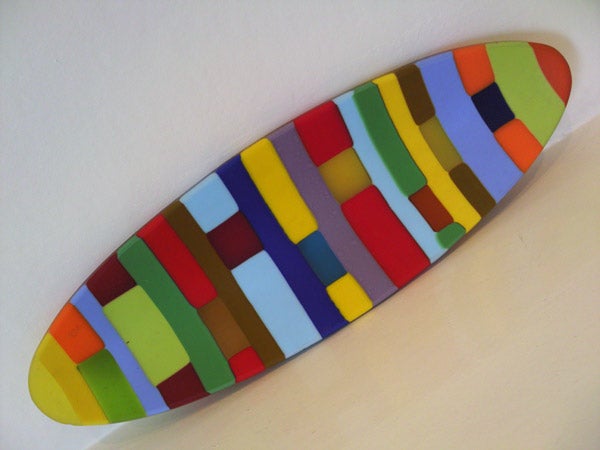 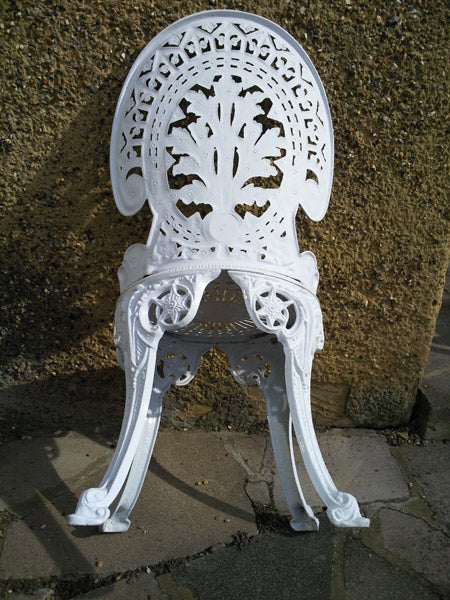 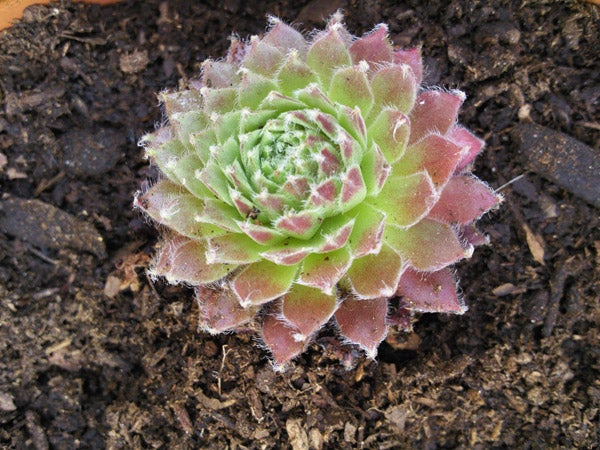 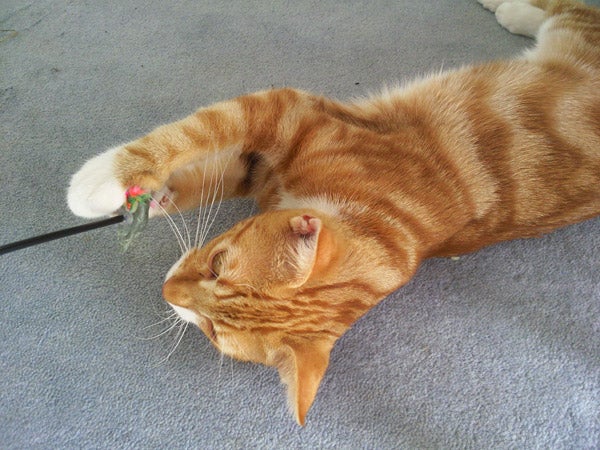 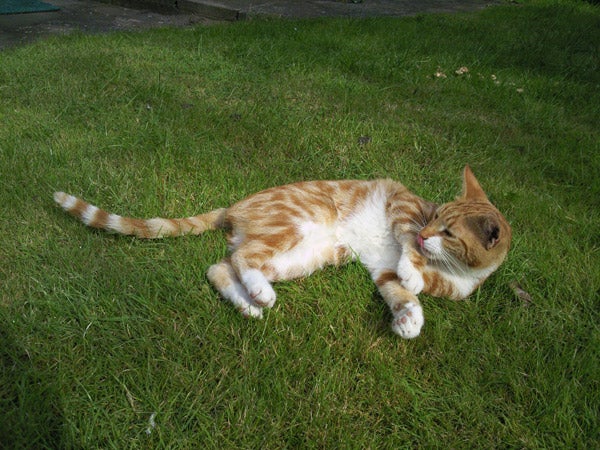 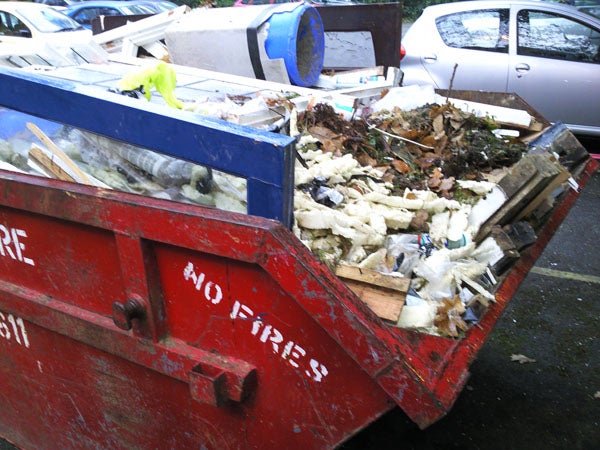 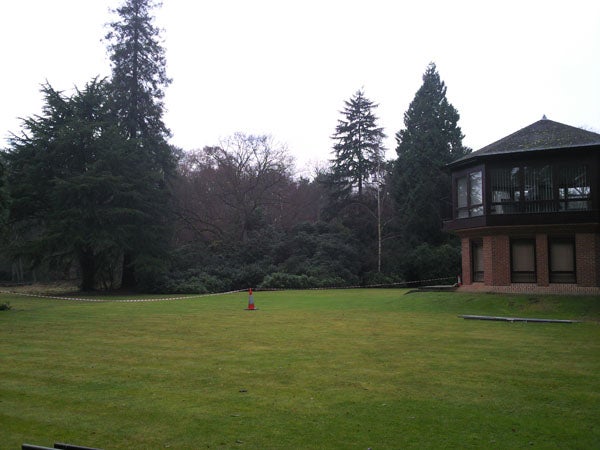 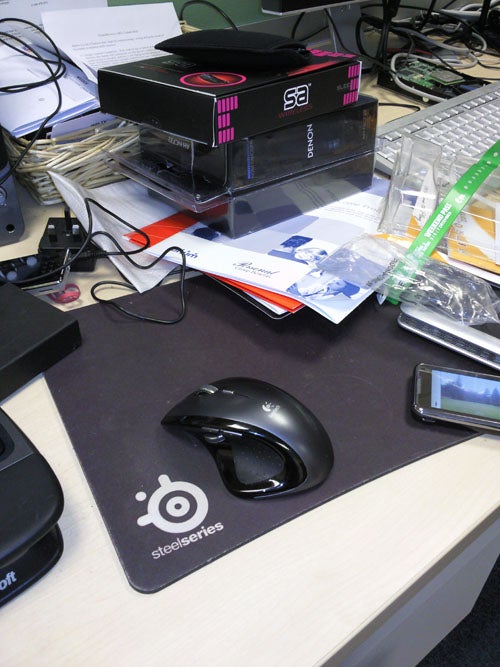