Samsung’s HW-D570 is a stylish 2.1-channel soundbar that offers 310W of audio power without cluttering up your living room with boxes and wires. But unlike some soundbars, such as the Roth Bar 1 we reviewed recently, this is not a simple TV speaker upgrade – Samsung’s effort comes equipped with a wider range of connections and sound features, making it more of a hub for all your equipment (although there’s no disc drive on board).

Naturally for a Samsung product, looks are high on the agenda. The HW-D570 is beautifully styled in a glimmering brushed silver finish, which looks elegant and glamorous. The front panel, which measures just 80mm high, sports exposed drivers – two midrange woofers and a tweeter at either end – but the piece de resistance is the central control panel. The dot matrix display shines through from behind, showing the current input and volume when altered, plus there’s a row of touch-sensitive buttons above it, which is very cool indeed and ensures that the front surface is completely flush.

What’s also pleasing is how slim this soundbar is. The 45mm depth is perfect for wall mounting beneath a similarly wall-mounted TV (there’s a bracket in the box). It’s 1056mm wide, which is ideal for TVs of around 40-46in.

Accompanying the soundbar is a wireless subwoofer, that can be placed anywhere in the room and anonymously beefs up bass output with its 150W amplifier. The only limitation is that it needs to be near a power supply. It’s a stylish unit too, with a sleek gloss black finish, but couldn’t be less matched to the soundbar so it might be wise to tuck it away out of sight.

There’s a useful array of sockets housed in two recesses on the back. You get two HDMI inputs and one output, with 3D video pass-through capability – great news if you have a couple HD sources you want to channel through the soundbar, and with Audio Return Channel support, it’s simple to enjoy sound from your TV. The HDMIs are all mini sockets and there’s a compatible cable in the box, but you’ll have to buy an extra mini HDMI cable for a second device. 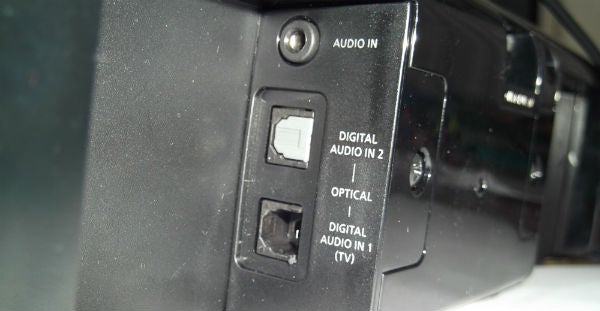 You’ll also find two optical digital audio inputs for non-HDMI sources and an analogue stereo minijack input, which is useful for MP3 players and the like. There’s a USB port too, but it’s only for software updates and not to play digital media – Samsung has missed a trick here.

The HW-D570 is supplied with a wireless cradle for iPod and iPhone, which beams music to the soundbar – a very appealing feature.

The HW-D570’s audio decoding capabilities haven’t been designed with Blu-ray in mind, however. It can only handle regular Dolby Digital and DTS and not True HD or Master Audio. But you won’t miss out on the extra sonic resolution these formats deliver because the unit can handle multichannel PCM – you’ll just need to set your Blu-ray deck to decode the formats beforehand though.

Samsung has piled loads of DSP sound modes into the unit, including Sports, Game, Music, News, Drama, Cinema, as well as Samsung’s proprietary 3D Sound Plus processing, which improves the depth and width of the soundstage to heighten the impact of 3D pictures. Power Bass does what it says on the tin.

Additionally, Virtual Surround is on hand to mimic real surround sound from the two speakers, while Smart Sound levels off audio peaks and troughs to prevent big jumps in volume. An AV Sync function allows you to sort out dialogue discrepancies – the delay can be set from 25 to 300ms, increasing in 25ms increments.

Setup and operation is blissfully simple. Sure, it’s a tad tricky get your HDMI lead into the sideways-facing sockets, but once you’ve plugged it all in the rest of the setup process is hassle free. Pairing between the soundbar and sub is done automatically, with a small blue light indicating a connection has been made.

A lot of the credit for this simple operation goes to the remote, which boasts a compact, ergonomic shape and large chunky rubber buttons. It’s complete child’s play to use, whether you’re toggling through inputs and sound modes or tweaking the levels. There are dedicated controls for the subwoofer volume and AV Sync, plus buttons for 3D Sound and Smart Volume. Excellent labelling eliminates confusion.

Without onscreen menus, all audio tweaking is carried out on the front panel but that’s not a problem as the informative display makes everything crystal clear.

What most people are looking for when they upgrade to a soundbar is sound quality that’s powerful, dynamic and detailed enough to put their TV’s speakers to shame, and the HW-D570 certainly fulfils that brief. With Return of the Jedi on Blu-ray, the two-way driver array produces a vigorous sound. The rebels’ attack on the Death Star is a cavalcade of feisty cannon blasts, screaming spacecraft and hearty explosions.

Throughout the movie, dialogue is clear and open despite the lack of a dedicated centre channel, and Darth Vader’s voice booms with the requisite depth and authority. The subwoofer does a reasonable job of controlling low-frequency effects, although it could do with more punch and power – we had to crank up the level to make it heard. Another positive is that the stereo soundstage boasts decent width and openness.

However, it’s a shame to hear the sound getting a little sharp and strident when the action hots up. Yes it’s dynamic and gratifying at first, but prolonged listening can get a little fatiguing at higher volumes. Certain effects sound too bright, like the roar of the Millennium Falcon, crackle of clashing lightsabers and blasting Scout Walkers. It’s not unlistenable, but does prevent its performance reaching the levels of the best soundbars on the market. The problem doesn’t seem to affect music playback quite as intensely, with a nice tone and more sympathetic balance to the sound.

Verdict
The HW-D570 is by no means the best soundbar on the market, but there’s much to like. First up, its brushed silver styling is stunning, bringing a bit of bling to your living room, while the inclusion of two HDMI inputs and two digital audio inputs gives it an advantage over many rival soundbars. Throw in a wireless subwoofer, wireless iPod dock, touch sensitive controls and an array of DSP modes and the HW-D570 looks like a decent proposition on paper.

Sadly, the strident edge to its sound doesn’t quite cut the mustard, there’s no USB media playback and the lack of HD audio decoding is a minor grumble. But if you want a stylish sound upgrade that won’t impact on your living space it might be worth investigating.