AV receivers aren’t high on the list of things you’d associate with Samsung, but the Korean giant has been turning out a nice line in home cinema amps for quite some time. Its latest range includes this entry-level 5.1-channel model, which is designed to provide a basic introduction to the world of surround sound – a fact reflected by its low price tag.


Aesthetically the HW-C500 is a break from the norm. It’s slimmer than most AV amps and Samsung keeps the front panel free from dials and physical buttons, opting instead for a minimal gloss-black design. It’s possibly one of the best-looking AV receivers we’ve clapped eyes on, but then again what else would you expect from Samsung?

But look closely and the front panel is busier then you might think. A silver strip on the right lets you adjust the volume, while a bank of touch-sensitive controls on the left lets you navigate menus and switch between the various sound modes. They’re so discreet you might not notice them from a distance.


An LED panel in the centre displays key info like the selected input, while a flap at the bottom drops down to reveal a further smattering of buttons, none of which seem important enough to earn pride of place on the front of the unit. We’d rather this space was used to provide a decent array of auxiliary AV inputs for on-the-fly device connection, but disappointingly there are none.

(centre)Version pictured uses binding posts, not spring-clips as on review unit and as stated in review(/centre)


All of the sockets are therefore confined to the rear, and although the selection covers most bases it’s hardly the sort of generous selection Onkyo, Yamaha or Denon would offer at this price. Taking pride of place are four HDMI inputs and one output, and thankfully all of these are specified as v1.4, which will please anyone hoping to bag themselves a 3D Blu-ray deck and TV in the near future.


On the video side, the HDMIs are backed up by two sets of component inputs and one output plus three composite inputs, while audio sockets include four digital audio inputs (three optical, one coaxial), four sets of analogue stereo inputs and 5.1-channel inputs, which will come in useful for Blu-ray decks with built-in HD audio decoding and analogue outputs. In the box, you also get an iPod/iPhone dock that plugs into the terminal on the back.


Also on the back, you’ll find spring-clip speaker terminals in place of more robust binding posts, which is the clearest indication of the Samsung’s budget nature and lack of audiophile ambition. One minor upside to this is that the speaker cables are easier to plug in, which inexperienced (or impatient) users might appreciate.

Internally the HW-C500 features a discrete digital amplifier design, which explains why it feels so much lighter than many other AV receivers. It musters 100W per channel, while the Crystal Amplifier Pro technology includes Multi Variable Feedback to keep unwanted noise at bay, and Intelligence Power boosts power when the volume peaks in order to avoid clipping.

But the rest of the spec sheet is disappointing. It’s unable to decode any of the HD audio formats found on Blu-ray discs, such as Dolby TrueHD, DTS HD Master Audio, DTS HD or Dolby Digital Plus – clearly a way of driving the price down. Thankfully, the HW-C500 can handle multichannel LPCM fed into any of the HDMI inputs, which means you have to tell your Blu-ray player to decode the soundtrack beforehand. The sound quality should be similar, but for people who prefer their AV receiver to do the decoding – or those who simply like seeing the name of the format pop-up on the display panel – this could be a turn-off.


Elsewhere you get the same sound modes found on Samsung’s all-in-one systems – Power Bass boosts low frequencies, Smart Volume keeps sound at a constant level and MP3 Enhancer augments MP3s. There are also 12 DSP modes to further tailor the sound to your taste. 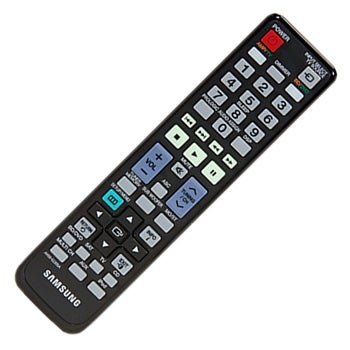 The setup process would have been helped immeasurably by the inclusion of onscreen menus, which are found on several other budget AV receivers, but again that would have meant extra cost. Still, the front panel menu makes things fairly easy to understand, using a logical structure to make up for the lack of onscreen visuals. You can assign inputs and adjust the audio parameters with minimal fuss.


But thanks to the Auto Sound Calibration mode, you don’t have to set the levels manually. Using the supplied microphone and a repeated blast of music (which could send you insane), it measures the acoustic properties of your room and sets the levels automatically. Given the intended audience for this product, this could end up being one of the more significant features.


The remote also helps to keep things nice and simple. The responsiveness and helpful layout of the buttons cause no stumbling blocks and all of the keys are clearly labelled, so you can quickly find functions you don’t use very often.

Onto performance, and although the HW-C500 does a passable job with Blu-ray soundtracks, it simply isn’t in the same league as entry-level models from the likes of Onkyo, Denon or Pioneer. It lacks the control, presence and finesse needed to steal your breath away, a fact exposed by ”Avatar’s” DTS HD Master Audio soundtrack – decoded into PCM by our Blu-ray player first, of course.

Yes, it’s feisty and dynamic, with deep bass and impressive surround channel performance – the HW-C500 conjures up a wide and absorbing soundstage, helped greatly by crisp reproduction of rear effects and smooth steering. But when the action really hots up (during the Battle for Pandora for example) high frequencies begin to strain with the tell-tale signs of harshness, and with the volume approaching maximum there’s an edge to the sound that makes it uncomfortable to listen to for prolonged periods.


We’re painting a negative picture here, and it’s worth reiterating that the HW-C500 is by no means a disaster. For the most part its movie performance is actually quite enjoyable. But when you can pick up a receiver from a dedicated audio brand for around the same price, offering more assured sound quality and lots more features, this Samsung doesn’t really stand a chance.


If you own a Samsung TV and Blu-ray player and want a matching AV receiver, then the HW-C500 might be an appealing option. It’s a highly stylish piece of kit with a decent amount of sockets, plus the supplied iPod dock and support for 3D signals is not to be sniffed at for this sort of money. But that’s where the praise ends – its sound quality isn’t up to the standards of similarly-priced rivals like the Onkyo TX-SR308, which also decodes HD audio signals and throw lots of other features and connections into the mix.