If you were seduced by the swanky looks of the 2.1-channel HT-X810R system but would prefer the full 5.1-channel experience then the HT-X715 could be right up your alley. It shares many of the same features and design characteristics as the 810, but adds those all-important centre and rear channels to deliver home cinema sound as it was meant to be heard.


The point of a system like this is to remove the hassle that comes with piecing together a separates system, and its affordable price tag allows you to bring good quality cinema sound into your home without breaking the bank.


As is the norm with Samsung kit, this system is absolutely stunning. All of the components are decked out in the gently red-tinted ‘rose black’ finish found on some of the company’s TVs, without an angle or straight line in sight. There aren’t many companies producing systems with this much style and originality, and for that Samsung should be applauded.

The slim main unit houses a DVD/CD player, all the relevant decoding and 800W of amplification, and its dual layout means you can either place it vertically or horizontally on a table top. When turned off its featureless face gives it an appealingly mysterious air, but fire it up and a display panel appears in the centre, plus there’s a row of touch-sensitive buttons and a discreet disc slot along the top edge.


The HT-X715 comes with a pair of fairly tall front speakers (which can be perched on circular stands or mounted on the wall), a pair of smaller rears (also wall-mountable) and a horizontally shaped centre speaker, all of which require no assembly – just take them out of the box and plonk them in place. All of the speakers compliment the main unit beautifully and although their slightly plasticky feel betrays their budget origins, they feel sturdy enough to stay the course.


Also in the box is a passive subwoofer that on first glance looks uncannily like a big toaster. Unusually, one half is covered in speaker cloth while the other is gloss black, and the whole thing is propped up on four chunky feet.

On the back of the main unit is an HDMI output (for outputting DVDs in 1080p, 1080i, 720p or 576p) alongside component and composite video outputs, while the analogue stereo and optical digital audio inputs enable you to play other kit through the system. It’s also pleasing to discover that the system supports wireless rear speakers using the optional SWA-3000 wireless receiver module and TX card, which plugs into the slot on the rear. 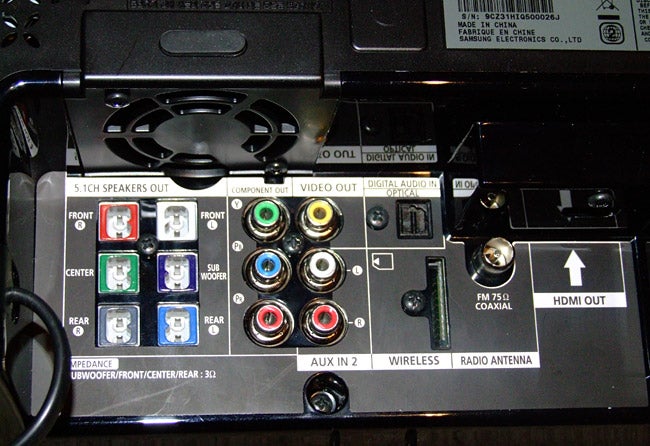 The wireless shenanigans continue with the system’s Bluetooth support, which was one of the things we loved about the HT-X810R. That means you can stream audio to the system from a compatible device (such as a mobile phone, MP3 player or laptop) located up to 10 metres away. It’s a great way to enjoy music on the fly and is an unusual feature to find on such an affordable one-box system, adding yet another string to its bow.


Under a flap on the left hand side is a USB port, which provides another way of playing back your media content. You can plug in memory sticks, flash drives, card readers, MP3 players and digital cameras and play DivX, MP3, WMA, WMV, XviD and JPEG files – which is a very impressive roster by anyone’s standards. Among the supported disc formats is DVD-Audio, which is also found on the 2.1-channel HT-X810R but multichannel material will find a more natural home on this 5.1-channel setup. 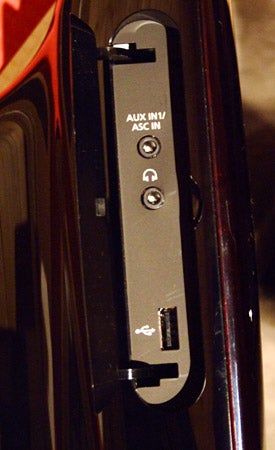 The system’s Auto Sound Calibration (ASC) mode makes it blissfully simple to optimise the sound for your room. The system measures test tones using the supplied microphone and automatically sets the appropriate channel levels and distances between speakers. It’s the sort of feature normally reserved for pricier systems and receivers and its appearance on such an affordable setup earns Samsung some serious kudos.


Also on the feature list is Dolby Pro Logic II processing, P. Bass (which boosts low frequency effects) Audio Upscaling (which aims to improve compressed audio playback), a range of EQ effects, virtual headphone and an FM radio tuner. You can even change the player’s wallpaper setting to a JPEG or DVD frame of your choice. 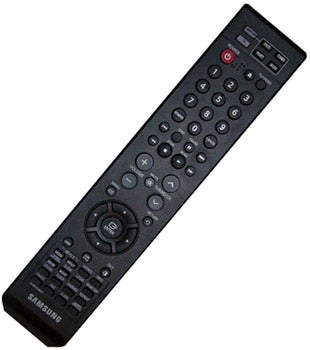 Operating the unit is a piece of cake thanks to the player’s responsive software, straightforward menus and the intuitive remote, which is a bit cluttered at the bottom but otherwise easy to master. We like the fact that it boasts dedicated buttons for all the main functions (such as the various sound modes, channel levels and inputs) so you rarely have to enter the setup menu.

To test the Samsung’s performance we jumped straight to the ”King Kong” DVD and we’re pleased to report that its sound quality is noticeably better than the HT-X810R. It handles the movie’s frenetic soundtrack with a lot more balance and authority, and unlike many one-box jobs it packs enough punch to get the pulse racing without doing damage to your ears in the process.


What impressed us most is the quality of the subwoofer’s bass output, which is intense and menacing but not as overbearing or flabby as the X810’s bass box. During the crunching Kong/T-Rex face-off or the brontosaurus stampede (still the most ridiculous scene in film history) it underpins the action with deep, solid low-end rumble but politely gives the rear effects, voices and score plenty of room for manoeuvre. It’s all the more pleasing that this sympathetic balance is achieved after using the ASC mode.


The other speakers do a good job too, glossing over their obvious lack of refinement with sheer effort and elbow grease. The fronts and rears go about their business with exhilarating gusto, generating a snappy, expansive soundstage, and they’re surprisingly deft when it comes to conveying delicate treble – the sound of insects scuttling over Naomi Watts as she hides inside the log are delivered with skin-crawling clarity. The centre channel has a good stab at dialogue but it’s more muffled than it would be on a good separates system.

We’re not saying that the Samsung is any sort of match for a good separates system, as there’s a slightly boxed-in feel to the sound that a more competent amp and speakers would avoid, but as one-box systems go this isn’t bad at all.


Sadly it all falls apart with music playback, with hi-res DVD-Audio material, CDs and MP3s sounding disappointingly flat, clumsy and lacking in detail, while the subwoofer suddenly becomes too eager to stamp its authority on proceedings and smothers stereo playback.


Picture quality is impressive though, with the system’s 1080p upscaling showing no serious artefacts. The system delivers pure and natural colours, proving itself able to show subtlety and strength within the same frame, while the high amount of detail in the picture lends satisfying clarity to Skull Island’s busy scenery.


When buying an affordable one-box system instead of separates, you have to be prepared to compromise on quality, and while that’s certainly the case with the HT-X715T, its fantastic feature list should help you to forgive its sonic shortcomings. There aren’t many systems at this price that offer Bluetooth support, auto calibration, DVD-Audio playback and such generous format compatibility.


But taking its astonishingly low online price into consideration, it does a much better job with films than you may expect. Music playback isn’t great, but in all other respects the HT-X715T is a terrific proposition – and that’s before we’ve even mentioned its lovely, show-stopping design.