Anyone looking for an affordable all-in-one home cinema system would do well to check out the latest range from Samsung. The Korean company’s one-box systems consistently offer a generous features-to-price ratio that makes them irresistible to budget buyers, regardless of how good their AV performance is.


The HT-X30 is a fine example of this. For under £200, you get a full 5.1-channel DVD system that pumps out a mighty 800W of audio power and comes equipped with an HDMI output with video upscaling, a USB port, DVD-Audio playback and even the option to make the rear speakers wireless.

The other thing that’s guaranteed when you buy a Samsung system is an eye-catching design, and this system is no exception – although it’s nowhere near as stylish or distinctive as the 2.1-channel HT-X200 reviewed here. The HT-X30 uses a more conventional set-top box style main unit, which at first glance looks uncannily like one of Samsung’s recorders with its inward-sloping front panel.


In the box are five satellite speakers, which are compact enough to sit comfortably on shelves or window sills, and a slim passive subwoofer that handles 135W of bass muscle passed on from the main unit’s built-in amplifier.

All of the cables are plugged into the back of the main unit, including the colour-coded speaker wires. The deck also features a healthy selection of video connections, including HDMI, component, SCART and composite outputs. The HDMI output supports Samsung’s Anynet+ feature, which lets you control the system and a Samsung TV with the same remote. The video sockets are joined by optical digital and analogue stereo audio inputs for connecting external sources and an input for the FM radio antenna.


If you don’t like the thought of running cables to the back of your living room, then you can add the SWA-3000 wireless rear stereo amplifier (available for just under £100) and make the rear speakers wireless. The device comes with a TX card that slots into the rear of the main unit and allows it to communicate with the SWA-3000.


As mentioned, the HT-X30 is packed with features. It will upscale DVDs to 720p and 1080i, but not 1080p, and plays DVD-Audio discs (if you can still find any to play, that is) and because it’s a 5.1-channel system you can listen to them in all their multi-channel glory.

Like any home cinema system worth its salt, the HT-X30 lets you play digital media files including DivX, MP3, WMA and JPEGs. You can play these from recordable DVDs or CDs, or load them onto a flash memory drive and plug it into the USB port on the front panel. Alongside the USB port is a 3.5mm minijack for playing back music from an MP3 player.


Tweaking the sound to suit your taste is simple thanks to the dedicated Sound Edit button on the remote, which lets you alter channel levels and the left/right balance. There’s also a test tone to check your settings, a range of DSP/EQ effects that mimic different environments and Dolby Pro-Logic II processing with Music, Cinema and Matrix modes. 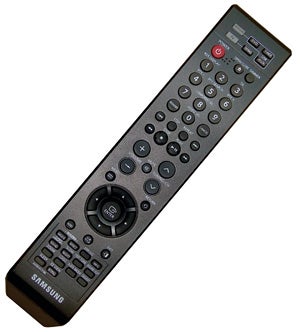 Setup is a quick and convenient procedure, and the system is generally easy to operate. Menu controls and DVD playback commands are carried out with minimum delay and the main menu, although very basic, is clearly laid out. The remote lets the side down with a cluster of buttons which are too small and too close to the bottom to press comfortably.


For a run-through of the system’s sound capabilities, we pulled Paul Verhoeven’s ultra-violent ”Starship Troopers” off the shelf and let it rip with the disc’s bustling 5.1-channel Dolby Digital soundtrack. Zipping straight to the exhilarating bug battle scene on Klendathu, our first impressions aren’t great; cranked up to a loud volume, the output is certainly powerful but lacks finesse, resulting in a harsh sound that makes big action scenes hard to enjoy. The constant gun shots, explosions and shrieking bugs aren’t given enough room to breathe by the front channels, resulting in a barrage of noise that’ll have you reaching for the volume down button in seconds.

But at lower volumes the satellites are easier to tolerate and there are actually some positives to be taken from the HT-X30’s performance. The rear satellites do a decent job at immersing you in the action, with sharply reproduced and smoothly steered surround effects. Credit also goes to the subwoofer for delivering tight and potent bass without overpowering the other speakers. The likes of REL or Velodyne won’t be having any sleepless nights but as all-in-one passive subs go it’s not a bad example.

The limited capabilities of the speakers means you won’t get the best out of DVD-Audio discs, with the extra sonic detail proving a bit of a stretch for them, particularly at loud volumes. However the overall quality is streets ahead of CD playback and simply having DVD-A playback at all is a real bonus at this price, so I guess we should be grateful. 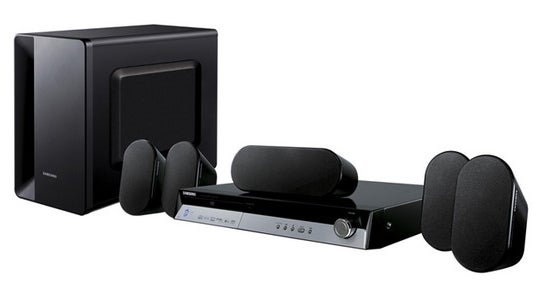 As for picture quality, Verhoeven’s lurid CG-heavy visuals scrub up well with the deck’s upscaling set to 1080i. It handles the schlocky, blood-splattered colour palette with consummate ease, while the scene where thousands of bugs pour across the planet terrain reveals some decent detail handling. There’s very little evidence of MPEG block noise, jaggies or other unwanted video artefacts, which results in notably clean and sharp images.


On paper, Samsung’s HT-X30 is a really tempting package. The feature list is tremendous for a system under £200, giving you plenty of value-adding extras to fiddle with between films. And there are elements of its performance that will give you reason to smile, such as the solid picture quality. But the system’s playback of movie soundtracks leaves a lot to be desired, at times delivering an uncomfortably abrasive sound that cruelly exposes its budget blueprint. Good value then, but approach with caution.