They might make audiophiles wince, but all-in-one systems provide
the perfect way for buyers on tight budgets to bring a full home cinema system
into their home for a fraction of the price of separates. And when you buy a
Samsung system, you’re guaranteed to get a plethora of cutting-edge features
into the bargain. The 5.1-channel HT-D5500 is no exception, boasting a
tantalising spec sheet (including 3D Blu-ray support) and a stylish design
that’ll bring a touch of hi-tech pizzazz into your living room.

When choosing an all-in-one system, one of the main
considerations is the size of the supplied speakers. Where the HT-D6750W was
designed for larger rooms with its four huge tallboy towers, this system comes
with a set of five compact bookshelf satellites and subwoofer, all of which are
considerably easier to accommodate on and around your existing furniture.

The satellites for the front channels measure a diddy 90(w)
x 207.5(h) x 68.5(d)mm, while the rear pair is slightly shorter at 141.5mm high
and the sub stands just 350mm tall. Not only are they compact, they are also easy
on the eye – the gloss black finish so synonymous with Samsung’s home cinema
kit is again used to delightful effect, and their boxy shape works well.
Unusually, there are no table-top stands, you just plonk them down as they are.
You also get a 360mm-wide centre speaker styled identically to the other
satellites.

As for the Blu-ray player/receiver unit, the design is the
same as that of the HT-D6750W. It’s an all-black affair with fairly slim
dimensions (60mm high), but it’s the little embellishments that really catch
the eye. The display panel at the front features built-in touch sensitive
controls and a neatly integrated disc slot. On the right are touch-sensitive
volume controls placed on a little hump, with a USB port and setup mic input
under the flap below. All-in-all, this is a great-looking system.

It’s also well-stocked on the connections front. Being a
3D-capable system, the HDMI output is specified as v1.4, but even more welcome
are the two HDMI inputs, which allow you to channel other AV kit through the
system and listen to them in surround sound if you like.

The rear panel is packed with other intriguing sockets – there’s
a slot for Samsung’s transmitter card, which means this system supports
‘wireless’ rear speakers, but you’ll need to buy the optional £100 kit (the SWA-5000,
which is supplied with the HT-D6750W). There’s an interface for the supplied
iPod cradle – another example of Samsung’s generosity – plus optical digital
and analogue stereo audio inputs. On the networking front, there’s no built-in
Wi-Fi like the HT-D6750W but there is a second USB port on the back that lets
you connect Samsung’s optional wireless LAN dongle, as well as an Ethernet port
for those who’d rather go down the wired route.

Few companies manage a better price-to-features ratio than Samsung, and once again the HT-D5500 is like a showcase for everything that’s currently cool in the world of home cinema. You want to stream media files from your PC? You got it. The system is DLNA certified and supports a wide range of formats including DivX HD, MKV, WMA, WMV, AVCHD and JPEG (which it can also play from USB devices connected to the front port).

The system also grants you access to Smart Hub, its fresh new internet portal for 2011. This boasts a bevy of features not found on the previous Internet@TV service, including a clever Search All function that pulls up content from web apps and other devices, plus Your Video, which recommends movies to watch based on ratings and your viewing history, as well as providing detailed information about them.

There’s a newly-improved range of apps on board, including BBC iPlayer, Facebook, YouTube, LoveFilm and Picasa, plus loads of games, puzzles and stories for younger members of the family. In fact, the family theme continues with Smart Hub’s ability to group apps into different folders and rename them, letting you create a specific area for the kids. The layout is flashy and sophisticated but always easy to use, laying out app icons in a grid and allowing you to add new content from the Samsung Apps section.

On the 3D side, the HT-D5500 features 2D-to-3D conversion, which has filtered down from Samsung’s TVs and is a potentially useful feature for those who have already splashed out on a 3D TV without that technology.

Want more? How about the wide range of sound modes, including the new 3D Sound processing, which joins Samsung’s familiar DSP line-up of Smart Volume, Power Bass, MP3 Enhance and Virtual 7.1. Also returning is Samsung’s range of bonkers-sounding Sound Effect modes (Philharmonic Hall in Bratislava, anyone?) and Dolby Pro Logic II processing. The on-board Crystal Amplifier Plus musters a total of 1000W and the system can decode both Dolby True HD and DTS HD Master Audio. 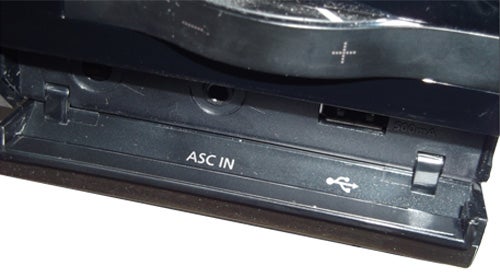 Add to that full BD Live support with 2GB of built-in memory and you have a very well-specced home cinema system for the money. You have to fork out a little more for some of the juicier stuff like Wi-Fi and wireless rears, but even with these added extras it’s still better value than some systems on the market.

What’s more, it’s a cinch to install and use. All the cables are in the box and the colour coding of the plugs shows you where to stick them in the rear panel. There’s an ASC (Auto Sound Calibration) mode that selects the appropriate settings for your room using a setup mic and test tones, removing what’s arguably the trickiest bit of the setup procedure.

Once that’s done, finding content requires zero brain power thanks to the gorgeous-looking onscreen menus, also new for 2011. Colourful animated icons and large text dominate the Home menu, and although it’s a touch hesitant to move from one option to the next it’s not too frustrating. Controlling these slick menus is a breeze too thanks to the remote’s thoughtful button arrangement. Everything is exactly where you expect it to be, plus the large rubber buttons and clear labelling will keep your brow positively unfurrowed.

As we discovered with the HT-D6750W, Samsung’s disc loading speeds are among the best on the market, and that continues with the HT-D5500, which fires up the stubborn Terminator Salvation Blu-ray disc in 39 seconds. Just as well, as you’ll want to get start watching its high-definition pictures as quickly as possible. 2D pictures are sharp as a tack and reproduced with deep, radiant colours. And with the HDMI output set to 24Hz, motion tracking is smooth and judder free.

After loading up our trusty promotional 3D copy of Avatar, we’re rewarded with richly immersive pictures. The HT-D5500 supplies our Panasonic test TV with immaculately-rendered pictures, with no artefacts or errors to speak of. The depth and separation of elements within the 3D image makes it utterly entrancing – our absolute favourite scene is the ‘First Sortie’ chapter, which shows a helicopter zooming alongside a flock of flying creatures, dipping over a waterfall and touching down deep in the forest. It’s pure, jaw-dropping spectacle, with the crisp and composed layers of scenery giving a convincing sense of depth while keeping foreground objects looking sharp and blur-free.

However, after comparing it with the latest Panasonic systems, its Japanese rival adds an even greater sense of texture and sharpness, with shading and colour blends looking fractionally more convincing. It’s minor, but might make all the difference if you’re particular about your pictures. What’s more, we’re not overly keen on the Samsung’s 3D conversion, which has its moments but its lacklustre layering falls some way short of genuine 3D.

On the audio side, the HT-D5500 is an impressive performer for a budget all-in-one system. Skipping to Avatar’s ‘Assault On Home Tree’ chapter, the opening helicopter effects are smoothly steered around the soundstage and when Quaritch launches the attack the action gets suitably boisterous. It drives home explosions with a punch, and the tapestry of other effects, such as whizzing arrows and scattering debris, are crisp and appropriately sharp. There’s also plenty of detail seeping through the speakers, from the delicate crackle of fires to the distant tweeting of forest animals during the movie’s quiet moments.

This lively, powerful performance is likely to push most listeners’ buttons, but compared with a more proficient receiver/speaker combo you can hear where the Samsung falls short. For example, better quality speakers will deliver a more open sound with greater clarity in the high frequencies, and while the passive subwoofer makes the room rumble it doesn’t handle bass tones with the same tautness and control as a decent active model. But those are the sort of sacrifices you make when buying a one-box system, and as long as you’re OK with that then this system is not likely to disappoint.

Despite lacking some of the luxuries that made the HT-D6750W such a compelling proposition (such as built-in Wi-Fi and wireless rears), the HT-D5500 still manages to impress. Features-wise, Smart Hub is the highlight, but it’s great to find DLNA media streaming, a supplied iPod cradle and HDMI inputs on-board at this price, all of which makes it terrific value for money.

What’s more, it’s attractive, easy to use (thanks to the gorgeous onscreen menus and automatic calibration) and offers extensive format support. Sound and picture quality are solid, although some buyers might be after a slightly more mature sound, in which case they’d better start saving up for separates – everyone else will be happy with what this system has to offer.