Another day, another Samsung Blu-ray all-in-one system, but this time it’s a 3.1-channel affair aimed at those who don’t fancy a full-on surround setup but want to avoid the ignominy of listening to movies through TV speakers. Just because the speaker count is lower, that doesn’t mean the feature count is too – a glance at the spec sheet reveals that the HT-C7300 boasts all of the tricks found on the company’s larger systems.

And as ever, this system is a stunner. Never one to rest on its laurels, Samsung has dreamed up yet another funky new design for the HT-C7300’s Blu-ray player/receiver unit, this time a futuristic-looking table-top console that slopes downwards towards the front. The front panel is mostly decorated in Samsung’s time-honoured black finish, and shining through the transparent strip at the bottom is a row of illuminated icons for the touch sensitive controls just above them, alongside a dot matrix display on the left. But the real wow factor comes when you hit the open/close button, as the entire front panel slides across to reveal the disc tray. Not as exuberant as the HT-C9950W perhaps, but a very modern and distinctive design that’ll be a talking point wherever it’s placed. 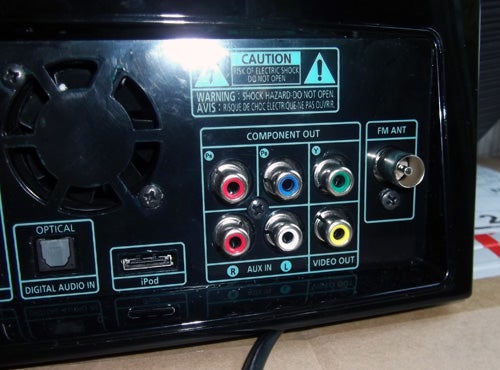 Tucked down the right-hand side is a USB port, while on the back is a surprisingly generous amount of sockets for plugging in external sources. Joining the HDMI output are two inputs that make it possible to switch between HD devices using a single HDMI input on your TV – not to mention boosting the sound quality of games consoles or TV programmes. Non HDMI sources can be connected to the optical digital audio input or the analogue stereo ports, while component and composite video outs provide connection methods for old-school displays. On the networking side, you get an Ethernet port and a second USB port designed to house a Samsung Wi-Fi dongle, which is included in the box (but not with our review sample, sadly). 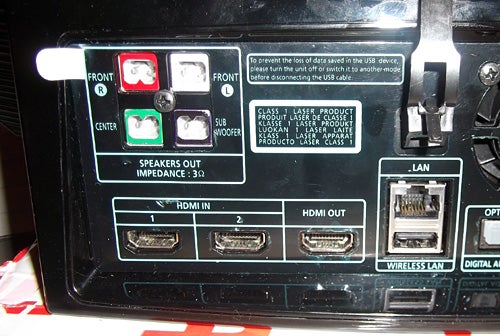 The HT-C7300 also allows you to plug an iPod dock into the dedicated port on the rear and enjoy music and video from iPods and iPhones. An FM radio is also on board so you’ll find an aerial input for that too, as well as a bank of terminals for the colour coded speaker cable plugs, which makes the system a cinch to install.


The system’s bookshelf front speakers look rather classy with their gloss-black façade, exposed brush-effect cones and silver stands, but pick them up and they’re fairly light and plasticky, which may be par for the course with systems at this sort of price but doesn’t fill us with confidence. As well as these front speakers you get a slim, similarly-styled centre speaker and a compact passive subwoofer. All of the speakers sport springclip terminals on the back.

In terms of features there’s plenty to get your teeth into. The line-up is pretty much the same as other Samsung systems like the HT-C9950W and HT-C5530 so we won’t go into any great detail, but the highlights include Allshare, which lets you stream multimedia content wirelessly from devices on your home network, and Internet@TV, which offers a range of web applications such as Facebook, Twitter, YouTube, Picasa, Rovi and LoveFilm, plus new ones can be added when available. Both features work smoothly and are presented with eye-catching graphics and a logical layout.


Of course, being a Profile 2.0 system you can also download bonus movie content from the internet. Samsung’s systems normally support a wide range of digital media codecs and containers and this one is no exception. DivX Plus HD, WMV HD, MKV, MP3, WMA and JPEG can all be played from USB sticks connected to the side port or streamed from networked PCs. As for Blu-ray, the onboard decoders for Dolby TrueHD and DTS HD Master Audio mean all HD audio bases are covered, even though you don’t have the benefit of rear channels. 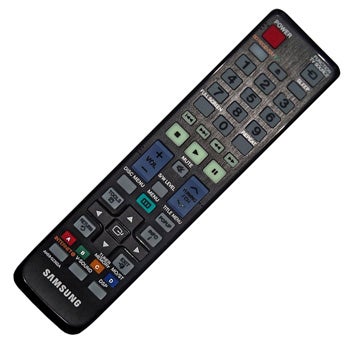 A range of sound modes are also provided. Smart Sound levels out the differences in volume between sources and programmes, while MP3 Enhancer improves the fidelity of compressed music and Power Bass boosts low-end output. These can be toggled through using the DSP button on the remote, and only one mode can be applied at a time. Samsung’s V.Sound aims to expand the three-channel soundfield to emulate surround sound. A dedicated subwoofer level control allows you to tweak bass as required.


Like most Samsung systems, the HT-C7300 is incredibly easy to set up and use, even more so in this case without rear speakers to rig up. The brightly coloured onscreen menus look terrific and the cursor is responsive. It’s all controlled by a thoughtfully designed remote, which achieves a Panasonic-esque level of simplicity and user-friendliness with its chunky buttons, no-nonsense labelling and intuitive button layout.


We tried out a few Blu-ray discs and loading times are quick overall, taking 34 seconds to load Iron Man 2 and just 46 seconds to get the tricky Terminator Salvation disc up and running. On screen performance is also impressive – Iron Man 2’s dazzling 1080p transfer is reproduced with intense sharpness, bringing out the subtle detail in close ups of Stark’s goateed face, which look beautifully crisp and textured. Panoramic shots of the Malibu cliff tops surrounding Stark’s home and Monaco look similarly stunning.


The HT-C7300 also paints bright, accurate colours with all the subtle shading intact, which brings an engrossing depth and complexity to the picture, plus at 1080/24p it handles the fast-paced action of the Monaco Grand Prix scene without any distracting judder or stepping artefacts.

Moving to sound quality, the same scene is reproduced with a surprising amount of power and drive. As Whiplash slices through F1 cars they come crashing to the ground with a meaty thud, loud explosions have a rich and forceful bottom end, while the crack and snap of Vanko’s DIY whips is crisp and cutting.


Elsewhere, AC/DC’s high-octane rock soundtrack sounds suitably upfront and energetic, although with this and other bass-heavy moments the passive subwoofer is a little overzealous, offering a resonant sound that lacks the punch of a good powered sub, but it’s by no means a disaster.

Aside from that the HT-C7300 is a very competent performer. When the action hots up, high frequencies are sharp and attacking without sounding overly harsh, which lends an exciting dynamic to the showdown between Iron Man and War Machine. And during quiet scenes the system manages to dig out plenty of gentle detail and background ambience, plus dialogue is conveyed clearly. V.Sound doesn’t adequately spread the sound as much as we’d hoped, and you can forget about surround sound.


Samsung’s combination of cutting-edge features, living-room friendly looks and decent AV performance once again does the trick, making the HT-C7300 a great solution for those who can’t accommodate rear speakers. Sure, there are reminders of its budget approach in the plasticky speaker design and crude subwoofer performance, but when you consider everything else you get for the money – wireless media streaming, internet and BD Live access, HDMI inputs, all-encompassing format support and eye-popping Blu-ray pictures – it really is hard to judge the HT-C7300 too harshly for these relatively minor flaws, and as such it certainly warrants further investigation.