The HT-BD1252 is a variation on the HT-BD1250 Blu-ray system we reviewed last year, which we actually quite liked despite its slightly uncouth sound quality. Whereas that system came equipped with a set of four compact bookshelf-style speakers for the front and rear channels, the HT-BD1252 boasts a pair of tallboys for the fronts and bookshelf speakers for the rear, so we’re curious to find out how this new configuration impacts on the overall audio quality. The HT-BD1255 offers another variation on the theme, with four tallboy satellite speakers in the box.


Thankfully the 1252 is every bit as attractive as its stable mates, particularly the main unit, which plays Blu-ray/DVD discs, processes the sound and supplies 1000W of audio amplification. Its design is Samsung through and through, decorated in a deep gloss black finish that gets covered in dust and fingerprints quicker than you can say Mr Sheen. The inwardly sloping sides and curved corners also give it that distinctive Samsung allure, but it’s the touch sensitive buttons and blue-lit volume dial along the top that’ll draw the most “oohs” and “aahs” from visitors. 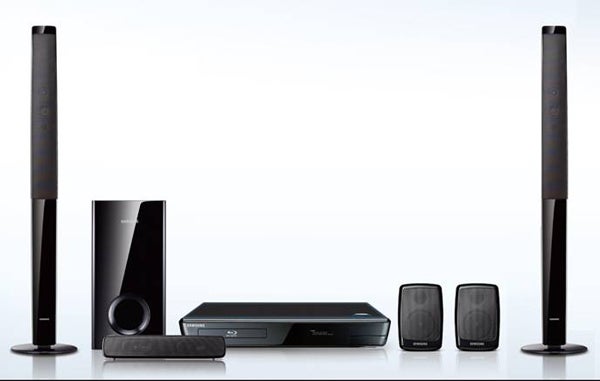 The tallboy front speakers come in two pieces that slot into each other, with a recess running up the spine to conceal the cable. The top section houses the actual speaker while the lower section is hollow, and the whole thing sits on a circular base. On the inside the cones are fashioned from Bio Kelp, which Samsung claims can deliver a more detailed sound than conventional speaker cone materials.


As we joined them together, we were taken aback by the poor build quality of the components. It’s not a great surprise at this sort of price but nevertheless it doesn’t suggest amazing sound quality is on the cards. The speakers are light, plasticky and not completely rigid, while the tiny springclips on the back don’t offer the tightest or most reliable cable connection possible.


That said, take a step back and these thin glossy columns look quite dashing. Although they’re more imposing than the bookshelf speakers, we doubt you’ll mind them taking centre stage in your living room – just don’t let anyone touch them…

The bargain basement build quality continues with the rear satellites, which are also light and hollow but perfectly attractive. At 150mm tall you can pop them discreetly on a shelf or cabinet, or mount them on the wall. As for the centre speaker, it’s the same one that accompanies the 1250 system, and once again we’re weirdly impressed by its compact shape, which isn’t a great deal bigger than the remote.


Completing the line up is the subwoofer, a passive affair crafted from the finest MDF, and like the head of Nicola T from Celebrity Big Brother it’s worryingly hollow. Being passive (i.e. doesn’t require its own power source) you don’t get any controls on the back, just a pair of springclip terminals.


Samsung makes up for this shonky build quality with a cracking set of features. Naturally the system is BD Live capable over a wired or wireless connection (see below) plus you can access YouTube and stream music, video or photos from PCs on your home network. It also decodes all the key Blu-ray audio formats and plays MP3, DivX and JPEG files via USB ports on the front and rear. It also upscales DVDs to 1080p and features an FM radio tuner.

The main unit is also equipped with a generous set of sockets on the back. The usual suspects are present and correct – HDMI v1.3a, Component, composite video and analogue stereo outputs – but it’s the array of other unusual connections that really catches the eye.


First, there are two optical digital audio inputs for hooking up external sources like a digital TV receiver, as well as a slot for the supplied iPod dock (which supports all of the main models, including the iPhone). The USB port can be used to connect a memory device for storing BD Live downloads and playing back MP3, JPEG and DivX files, or to plug in a Samsung Wi-Fi dongle and connect to the web wirelessly – although this gizmo will set you back around £50. If that’s too steep, then you’ll have to use the Ethernet port.


Finally there’s a slot for a TX card, which enables the unit to transmit rear-channel signals to the optional SWA-4000 wireless receiver (available for around £70). Although this and the wireless LAN adapter could add over £100 to the overall price, it’s good that Samsung has at least given you the option – after all, wireless is definitely the way to go.


As for installation, you get all the necessary speaker cables in the box, including longer runs for the rears, and the use of colour-coded terminals on the rear panel means there’s no confusion over where they all go.

The onscreen menus are blissfully simple to follow and look terrific, boasting a radiant colour palette and a logical left-to-right structure. The main menu makes it easy to find features like YouTube – simply hit the red button on the main splash screen and away you go, while PC streaming is grouped under the ‘e-Contents’ option in the main menu.


Setting up a network is easy if you have a DHCP router, and the system can search for available PCs and the relevant shared folders automatically. But if this doesn’t work for any reason (the folder name being more than 12 characters being one) then you’ll need to use the manual search, which is a real chore as you have to enter the IP address, the exact name of the folder and your Windows password using the onscreen virtual keyboard. Also the Auto mode is a bit of a misnomer as you still have to enter some of this information for it to work. It’s a shame it’s such a hassle as it’s otherwise potentially one of the system’s most impressive features. 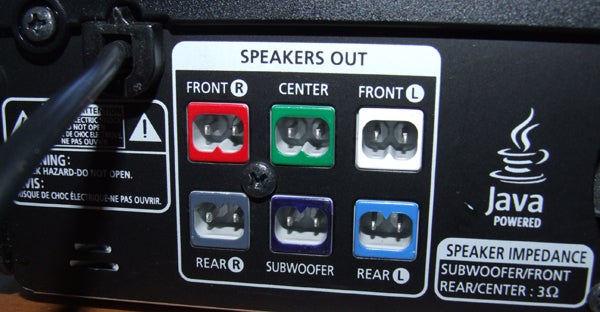 You’ll also find a basic array of audio adjustments in the setup menu, allowing you to adjust the speaker distances, the delay and the volume of the front, rear and centre channels, although changing the front and rear levels affects both speakers.


Samsung has included a range of SFE Modes primarily for music playback. With bizarre names like ‘Symphony Hall in Boston’, ‘Philharmonic Hall in Bratislava’ and ‘Jazz Club in Seoul’, they’re over-specific but convincingly evoke the surroundings they describe (or what we imagine they’d sound like anyway). The trouble is, why anyone would enjoy prefer these strange echoing effects to straight up stereo is beyond us. You also get Dolby Pro Logic II, which is a lot more useful.


As for pictures, the unit will output in 24Hz ‘Movie Frame’ mode and there’s a choice of Movie, Dynamic and User picture presets, the latter offering sharpness and noise reduction settings. But for the best results set it to ‘Normal’ – that way you get to enjoy the HT-BD1252’s impressive pictures in all their glory.


Inglourious Basterds on Blu-ray looks incredible. The system perfectly conveys the lustrous, cinematic quality of Tarantino’s visuals through the use of rich, natural-looking colours and emphatic detail reproduction. Checking out the shot of Colonel Landa arriving at Monsieur LaPadite’s home, surrounded by the verdant French countryside the system resolves the trees, bushes and grass with stunning ‘through-the-window’ clarity. It’s a trait that runs throughout the movie, with miniscule details being sharply resolved during brightly lit and dark scenes. Chuck crisp edges, a lack of unwanted noise and smooth motion tracking into the mix and you’ve got yourself one impressive picture performer.

Sonically the system is much better than expected too, and certainly improves on the HT-BD1250’s performance. Basterds’ DTS HD Master Audio track is sharp and detailed, and the system’s ‘Crystal’ amplifier packs a punch – when the Nazi soldiers shoot up the floor of Monsieur LaPadite’s house, the gunfire is ferocious.


During the movie’s outrageous climax inside the cinema, the flurry of rapid machine gun fire, screaming voices and explosions is conveyed with a decent amount of energy and detail. The nimble interplay between the speakers and clear effect placement creates a spacious, enveloping soundstage that draws you right in.


But while our impressions are generally positive, the sound quality is far from perfect. The overall sound is a little too resonant, but of greatest concern is dialogue. Its bright and frequently over sibilant reproduction is a far cry from the smooth, life-like vocal tones produced by some of the other speaker systems we’ve tested recently.

It’s not always comfortable at loud volumes either, pushing high-frequencies into harshness, and our final criticism concerns the subwoofer, which performs well for a passive unit but ultimately lacks the depth and punch needed to really get the room rocking.


As for music, the system’s CD and MP3 playback is very enjoyable thanks to its sympathetic balance across the frequencies, although the sub is a little loose and half-hearted when it comes to the driving kick drums of dance tracks.


When buying a one-box system at this sort of price, you should expect to make sacrifices, and in the case of the HT-BD1252 build quality and sound performance take the biggest hits. However, lower your expectations and you might just be surprised by what it can do – action set pieces are a hoot and there’s a decent amount of sonic detail to be heard.


And there are other reasons why you shouldn’t dismiss the Samsung out of hand – its feature list is impressive even if you don’t go for the wireless options, it’s easy to use (apart from network setup), loads Blu-ray discs in under 30 seconds and displays them with all the panache of a dedicated player. So if your budget is tight and you’re willing to accept its shortcomings go for it – otherwise we suggest you keep saving for a decent separates system.