Samsung was the first company to unleash a one-box Blu-ray system with last year’s HT-BD2, a 7.1 setup with a Profile 1.0 player at its core. Fast forward a year and the Korean company has followed it up with a range of systems based on its latest Profile 2.0 decks, whose Wi-Fi BD Live support, lightning-quick loading times and built-in memory make them arguably the best on the market.


Among these new systems is the HT-BD1250, a 5.1-channel affair that offers all the above features and more. It looks pretty special on paper, but faces stiff competition from the LG HB954PB and Panasonic SC-BT205, both of which impressed us with stellar AV performance and a tasty range of features. So how does the HT-BD1250 measure up?

One thing’s for sure – Samsung trumps them both on the looks front. The combined Blu-ray spinner and 5.1-channel receiver looks like a slightly bigger version of the BD-P3600, with its slanted edges and touch-sensitive buttons along the top. It’s also decked out in the same gloss black finish that adorns 99% of home cinema kit out there at the moment (would it hurt someone to use multicoloured stripes once in a while?) but it does make the unit look undeniably sleek and sophisticated.


Both the Panasonic and LG systems use spouse-bothering tallboy speakers, but the BD1250’s use a more modest bookshelf design. Their compact shape makes them much easier to place around the room if space is tight, and although they’re not a patch on LG’s champagne flutes, their gloss-black finish makes them an attractive feature. They’re light but sturdy, and each one is perched on a plastic stand that clips on the bottom.


The speaker line-up is completed by one of the smallest centres we’ve ever encountered – it’s about the same size as the remote – and a passive subwoofer remarkable only for its glossy front panel and compact size. All of the speaker cones are made from Bio Kelp, which uses the sonic properties of seaweed (obviously) to deliver what Samsung describes as ‘higher resolution sound’. It’s good for the environment too.

Although the rear connections are relatively generous for a one-box system, we can’t help but bemoan the lack of HDMI inputs, which prevents you from looping other hi-def sources through to your TV. There are, however, two optical digital audio inputs and analogue stereo input. Pictures can be piped to your display using the HDMI, component or composite video outputs, and an Ethernet port is provided for BD Live downloads and firmware updates.

But if you’re on a wireless network, you can side-step the cumbersome Ethernet connection and hook up to the Internet by plugging an optional Wi-Fi dongle into the USB port on the rear. It’s not limited to BD Live downloads though – you can also stream music, video and photo files from a PC on your network, which is a very nifty feature for anyone with a wealth of content on their PC hard-drive. We weren’t given a USB dongle to try this feature out, but if it’s anything like the BD-P3600 then it’ll be tricky to set up but a lot of fun once it’s up and running.


The rear speakers can also be connected wirelessly if you pick up the optional SWA-4000 transmitter/receiver kit, which we found online for just under £60. But one peripheral you don’t have to fork out for is an iPod dock, which comes in the box and supports most types from 1st generation right the way up to the iPhone 3GS. 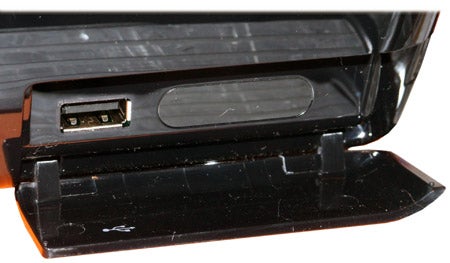 Elsewhere the feature list is generous. On the front panel is another USB port that lets you play MP3, DivX and JPEG from a flash drive, and on the Blu-ray side the system happily decodes Dolby TrueHD, Dolby Digital Plus and DTS HD Master Audio. Discs can be output in 1080/24p and your DVDs can be given a near-HD makeover using the 1080p upscaling feature. And if radio’s your bag, then there’s an FM tuner on board.


A one-box system wouldn’t be a one-box system without a range of gimmicky sound modes, and sure enough Samsung obliges. Pro Logic II processing turns stereo sources into 5.1-channel surround, while the EQ modes magically whisk you away to different environments like a Hall or a Church – at least that’s the idea. There’s also a Smart Sound function that prevents sudden changes in volume from making you jump. 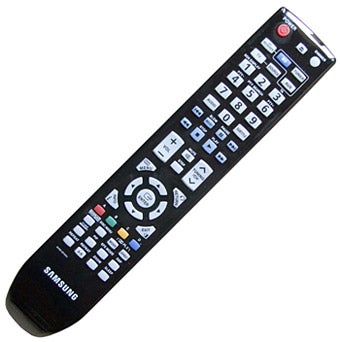 Like Samsung’s Blu-ray standalone decks, the BD1250 is simple to use, thanks to the cute, logically arranged onscreen menus and excellent remote, which is styled in the same gloss-black finish as the rest of the system and features intuitive button placement.


The system also provides a range of useful speaker setup options that let you set the distance, delay and volume of individual channels, and in every area of the GUI the system is slick and cooperative (including disc scanning and chapter skipping). Not only that but it also loads ”Spider-Man 3’s” first video screen in just 26 seconds.

In action we were highly impressed by the system’s picture performance. It delivers ”Spider-Man 3’s” lively 1080p transfer with mesmerising sharpness, scalpel-sharp edges, rich, balanced colours and punchy blacks, all of which give the picture a three dimensional look, even during dark scenes. The scrap between Sandman and Spidey is a cascade of dazzling colours, finely-rendered detail and smooth motion tracking. The Panasonic SC-BT205 offers slightly better detail retrieval but considering the Samsung’s lower price it’s still a very respectable performance.

We’re also impressed by the HT-BD1250’s sound performance. Those Bio Kelp speakers turn in a much better performance than they did on the HT-X720G system, admirably conveying the sparkling sonic detail of ”Spider-Man 3’s” Dolby TrueHD track. The system delivers key action scenes with impressive scale and bags of energy, firing effects around the soundstage with an open, expansive feel. Some effects have a hard, steely edge when pushed too loud, but mostly high frequencies sound smooth and detailed.


The sub can muster well rounded, hefty bass notes, but lacks a little discipline and control when the going gets tough. Dialogue also feels a bit boxed in. These aren’t deal breakers but they do put the Samsung below the LG and Panasonic in terms of performance.


It also does a better job with music than anticipated. Hard-hitting dance beats are delivered with plenty of gusto, and the system is able to tease out subtleties in jazz material. Instruments sound a bit brash in places but unless you’re a staunch audiophile the sound is more than adequate.


While its performance isn’t up to the standards of its immediate rivals from LG and Panasonic, the Samsung HT-BD1250 is still a fine one-box Blu-ray system. With Wi-Fi support, PC streaming and loads more, its feature list is better than its competitors and at this sort of money that makes it an absolute bargain, despite its sonic shortcomings.