Not long ago, Samsung camcorders were famous more for their low cost than anything else. Their features and video quality were no match for the main brands. But with the VP-HMX20, Samsung began to put up a serious fight, and subsequent models have continued the trend of respectable performance coupled with value. The HMX-R10 is very much a case in point. It’s no high-end prosumer powerhouse, but it does pack a lot into a small, keenly priced package.


Despite weighing under 250g and with the dimensions of a really fat mobile phone, the R10 still manages to incorporate an impressively large 1/2.33in CMOS sensor with a native 9-megapixels. This makes it quite accomplished as a digital stills camera, perfectly adequate to stand in for a compact, so you won’t need to bring one of these with you at the same time. Samsung adds a little interpolation to provide 12-megapixel images. There’s also a modest flash built in, although its range is not very great.


However, only 5.3-megapixels are used when shooting video. That’s still more than is required for Full HD, and enables a Smart zoom. The R10 only offers a 5x optical zoom natively, so Samsung calls upon the extra sensor pixels to boost this to 8x. This is not the same as a digital zoom, which interpolates missing data. Instead, there is no loss in detail as there will still be enough pixels for Full HD, although a smaller area of the CMOS will be used so light sensitivity will be reduced. 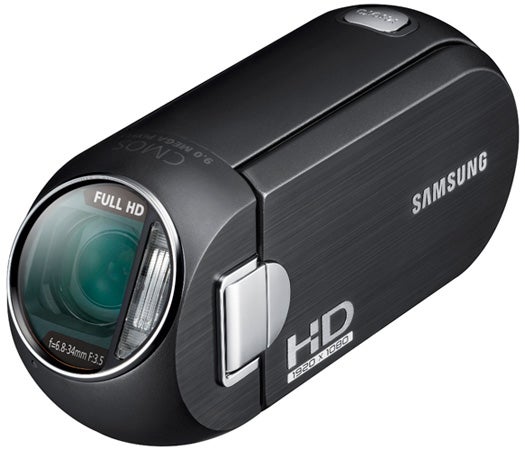 The R10 has quite a range of shooting modes on offer. At the top of the list are the Full HD options, of which there are three. Two interlaced 50i modes provide a pair of compressions levels, but there is only one setting for 25p Full HD. The remaining quality options are only specified by resolutions. There are 720p and 576p modes, both of which run at 50 frames/sec, and a low-resolution Web-friendly option.


There are also Time Lapse and Slow Motion options. The Time Lapse mode lets you set intervals of 1 to 30 seconds, and can record for a fixed period of 24, 48, or 72 hours, or until your storage card is full. The Time Lapse function also lets you specify the recording format to use, although only the progressive options are available. For slow motion, the R10 can shoot at 250 or 500 frames per second, which are played back at the regular 25 frames/sec, so you get 10 or 20 times slow-down respectively, for silky smooth motion.

Footage is recorded to flash memory, with no storage built in. An SDHC slot is located on the bottom of the device under the same flap as the battery, but this will make it hard to swap over memory cards when the R10 is attached to a tripod. However, as you can fit just under two hours of footage on a 16GB card even at the top video quality settings, you probably won’t need to swap out cards that frequently. 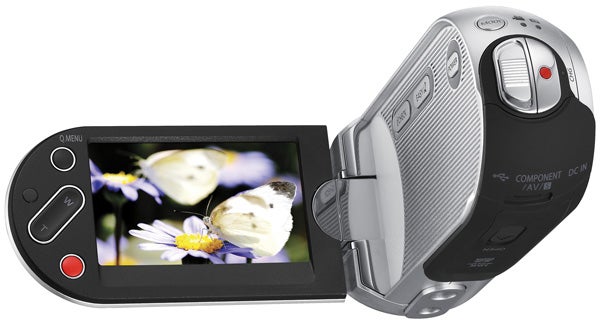 There are few physical features for the enthusiast user, with no accessory shoe nor minijacks for an external microphone or headphones. But the range of manual settings is reasonable, even if these are exclusively available via the touch-screen LCD. A quick menu provides access to a basic EV exposure control, but if you delve further into the main menu, aperture and shutter priority modes can be found. You can’t configure shutter and iris independently, but the EV setting remains available.


Manual focusing can also be found buried in the main menu. This is operated via a fiddly onscreen slider, or by touching a point on the screen. No touch-operated exposure control is provided, however. The menu also includes options to toggle the R10’s face detection system and backlight compensation, which like the manual focusing is somewhat buried here, considering how frequently it can be needed. There is also the usual array of preset scene modes. 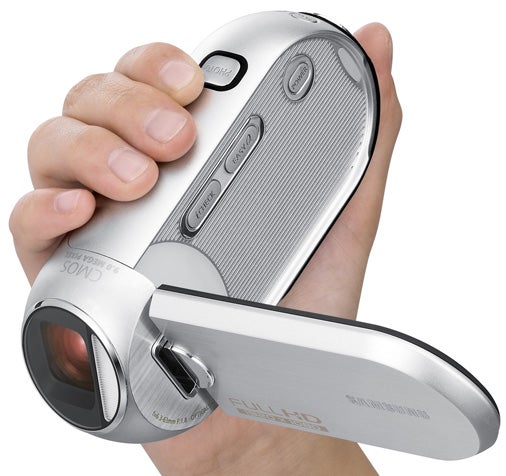 The 1/2.33in CMOS sensor is not quite as large as the 1/1.8in unit in the VP-HMX20, which impressed us so much with its image quality. But the R10 still achieves decent video quality in most lighting conditions. In bright sunlight, it tends to over-saturate colours and slightly blow out highlights, but this can be dialled back using the exposure controls. Low light performance is also very credible. There is quite a lot of noise visible, but colours remain bright to a low level of illumination. The Normal Super C. Nite mode can help here, as it allows the shutter speed to drop to 1/25th of a second. This does reduce noise, but doesn’t entirely eradicate it. Overall, though, the R10 performs well in low light, considering its price.


Image stabilisation performance isn’t quite so impressive. The R10 only offers an electronic system, rather than optical, and doesn’t incorporate any of the advanced modes now starting to appear on camcorders from Canon, Panasonic and JVC. As a result, only very mild shakiness can be compensated for, and the image will be quite jerky at maximum telephoto when shooting handheld. The zoom is also one of the slowest we’ve ever encountered, taking many seconds to travel from 1x to 8x.

The R10 follows the trend set by many pocket internet camcorders, as its editing software is built into the device itself. The Intelli-studio app loads onto your desktop computer when you plug the camcorder in via USB. Compared to some built-in editing apps, the features are quite extensive. Not only do you get the requisite abilities to upload files to YouTube and Flickr, or email video, but there is also a reasonable selection of editing capabilities on offer. 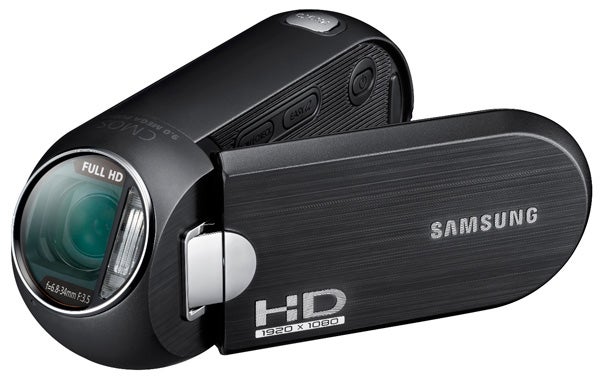 You can trim and apply filters to your clips, and add transitions between them. The latter can be customised and their duration varied, which is more control than usually found with this sort of software. You can also add titles and soundtracks. For many occasional video users, Intelli-studio could be all the video editing software they ever need.


The USB port also doubles as an AV output, providing both component and composite analogue video connectivity. The same component cable provides the two signals, with one of the RCA video plugs also carrying the composite output. There’s a mini HDMI connection available, too, but no cable is supplied.


The Samsung HMX-R10 boasts decent image quality and some useful manual features to lift it above the level of other pocket internet camcorders. But, most amazingly, it can be purchased for just £230. At this price, all of its shortcomings can be forgiven. In fact, this low cost makes it an absolute bargain. If you’re on a tight budget and are currently wondering whether you can afford a fully featured HD camcorder, wonder no more.