Until last year, Samsung was firmly targeting the budget end of the camcorder market. Then it released the VP-HMX20 and showed us that it had the technology to vie with the top names. Now the company has launched a new H series range, with which it hopes to build on the ground it gained in 2008. This week, we put the entry-level HMX-H104 through its paces.


The first batch of H series camcorders are separated only by the amount of flash memory they have on board. The H104 has 16GB, the H105 has 32GB, and the range-topping H106 incorporates a whopping 64GB. Despite its impressive specification, the VP-HMX20 only comes with 8GB. However, although the new models share a similarity of design with their predecessor, what’s inside is markedly different. 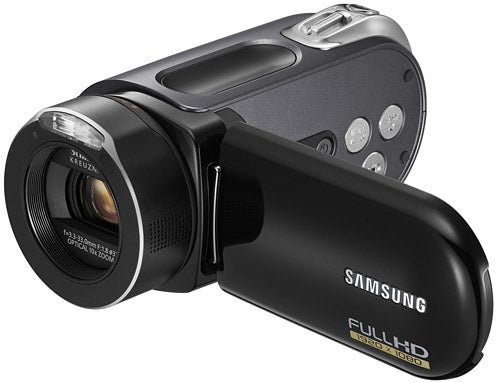 The most surprising aspect of the HMX20 was its massive CMOS sensor. At 1/1.8in, it’s still the largest in any consumer camcorder, and the 6.4-megapixel resolution was also market leading at the time of release. In contrast, the H104 and its siblings sport a much more modest 1/4.5in CMOS sensor with just 2.2-megapixels. Samsung still promises 4.7-megapixel still images, at 2,880 x 1,620, but this is clearly with a hefty dollop of interpolation, even if the end results are satisfactory for a camcorder.

A similar array of shooting resolutions and qualities are available to the HMX20. The top resolution is 1,920 x 1,080 Full HD, operating at 25 interlaced frames per second. But you can also record at 1,280 x 720 and 720 x 576 with 50 progressive frames per second. You can shoot time lapse footage, too, with one frame recorded every 1, 3 or 5 seconds for up to 72 hours at a resolution of 1,280 x 720. However, the slow motion options offered by the HMX20 have been left out. There are three quality settings, with the top Super Fine mode allowing around two hours of Full HD footage within the 16GB storage. There’s also an SDHC slot if you need a bit more capacity.

Although Samsung has bumped up the specifications for its latest camcorders, it hasn’t made many concessions for the videomaking enthusiast. The H104 has no lens ring, no accessory shoe, nor minijacks for headphones or an external microphone. The Quick Menu button on the LCD provides access to a few frequently used functions, including switching shooting resolution, plus manual configuration of white balance, exposure and focus. There are two white balance presets each for indoor and outdoor conditions, plus the usual auto and custom modes.

The exposure control has nine levels, and there are two options for manual focusing. You can either use an onscreen slider, or a one-touch system. However, we found the latter one of the least effective versions we’ve used, having regular difficulty locking to the points we indicated on the LCD.


There are yet more settings available in the full menu, in particular direct adjustment of aperture and shutter. The iris can be set from F1.8 to F16, and the shutter speed from 1/50th to 1/10,000th, but configuring one returns the other to auto mode, so you can’t set them independently. Samsung has also annoyingly placed backlight compensation and the telemacro controls deep within the full menu, making them a pain to enable.

Samsung is clearly aiming this model at point-and-shoot consumers. To this end, the H104 also offers an Easy Q mode which disables both the Quick Menu and full menu. There is also a curious rotating grip, which appears to be designed so you can hold the camcorder like a torch, although you will then need to use your other hand to toggle recording. If you’re shooting from the hip, this configuration does prove more comfortable than simply gripping the camcorder between thumb and forefinger, and you won’t risk dropping it either.

Thanks to its market-leading sensor specification, the HMX20 managed to put Samsung up with the big brands for image quality once and for all. The H104 is a bit more of a sober performer, however. It still shoots decent footage in good light. Colours are faithful, but not as heavily saturated as with some consumer models, particularly Sony’s. Detail levels are also more than acceptable. 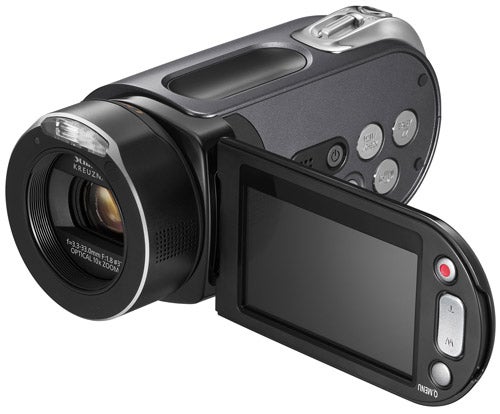 The image is surprisingly bright in poor lighting, too, considering the size of the CMOS sensor, and has commendable white balancing. However, colours become very washed out as illumination drops, so most of the detail nuances are lost. Unfortunately, the H104 is not such an exceptional low-light performer as the HMX20, and ranks below other pocket point-and-shoot HD camcorders in this area, particularly JVC’s Everio GZ-HD300 and Sony’s HDR-CX105E.


Flip off a cover at the rear, and a relatively comprehensive selection of AV ports is revealed. A small proprietary socket hooks up to a breakout cable offering component analog video and RCA audio connections. There’s also HDMI available, but as always it’s of the mini variety and no adapter is supplied in the box. The mini-USB connection resides here as well. 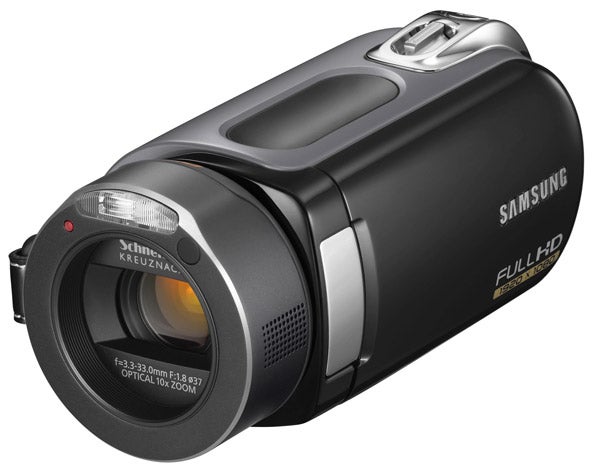 Unlike most other mainstream manufacturers, Samsung doesn’t use the AVCHD format for its camcorders. Instead, it relies on MPEG-4 AVC H.264 with an MP4 file format, which is allegedly more standards-compliant than AVCHD but in reality we found it caused problems with Adobe video editing software. Fortunately, Samsung has taken a leaf out of the current trend towards video sharing camcorders, and has bundled an app called intelli-studio, which installs from the camcorder itself. This provides some very basic editing capabilities, plus one-step upload to YouTube.


The Samsung HMX-H104 doesn’t quite live up to the expectations created by the VP-HMX20. But that isn’t to say it’s a bad camcorder. Costing just over £400, it’s actually rather good value, considering that Sony’s HDR-CX105E is priced around the same with just 8GB of built-in memory, and JVC’s Everio GZ-HD300 over £100 more, but with a 60GB hard disk. However, of these three the Sony’s superior low-light performance still makes it the best overall choice.