Samsung currently has four handsets in its line-up of Android-based Galaxy phones. There’s the high-end highly rated Galaxy S, the entry-level Galaxy Europa, above which sits the Galaxy Portal. Sliding in between the Portal and the S you’ll find this handset, the Apollo.


There are two versions of the handset available at the moment. The first is the standard Galaxy Apollo GT-i5800, which can be picked up on a number of networks, while the second is the Galaxy Apollo GT-i5801 which is exclusive to Orange. Both phones are functionally identical, but the Orange version has a sexier mirrored chrome finish and triangular home button on the front, while the standard i5800 model has a black finish and a squarer home button.

In terms of design, the Apollo is a tale of two halves as the front looks pretty classy thanks to its glossy finish, but the matt black battery cover looks a bit cheap and the phone is a little bit on the chunky side measuring 13mm thick.


As with the majority of Android devices, this model has a standard micro-USB port that’s called into play both for both charging the device and syncing it with a PC. This is located at the top of the phone behind a hard plastic flap. Next to it on the right hand side is a standard 3.5mm headphone jack while to the right you’ll find a dedicated power button. 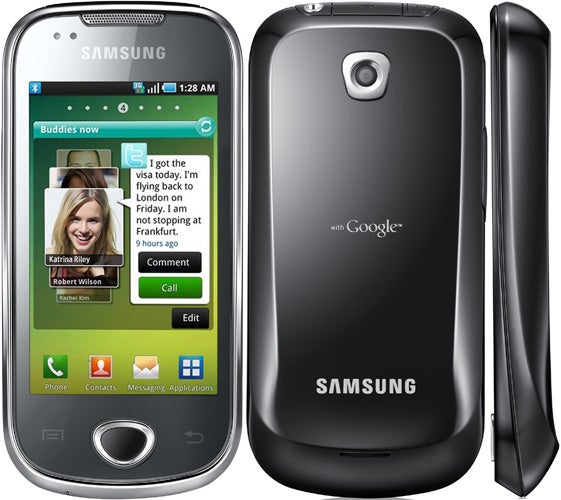 There’s also a volume rocker switch on the left hand side and two soft buttons for the standard Android Options and Back controls as well as the central Home button. However, the handset lacks the Search button you find on many Android phones and perhaps more annoyingly it doesn’t include a camera button. The rear phone can be prised off with a fingernail to give you access to both the SIM card and microSD slots, both of which can be accessed without having to remove the battery.


Although the Apollo sits just above the Portal in the Galaxy line-up, its 3.2in screen is slightly narrower than the one that the Portal uses. This is reflected in its resolution too, as while the Portal’s display has a resolution of 480×320, the Apollo’s screen tops out at 240 x 400 pixels.


However, the display does have one big advantage over the Portal’s one in that it uses capacitive rather than resistive technology. As a result, not only is it very sensitive to touch input, but it also supports multi-touch gestures such as pinch-to-zoom in the web browser and Google Maps application. That said, the display’s limited resolution does mean that you have to do a lot of zooming when viewing web pages, as you pretty much always have to zoom in to be able to read any text on a page.

Currently the phone runs Android 2.1 although Samsung UK has said on its Twitter feed that that the handset is likely to receive an update to v2.2 once the Galaxy S update is finished rolling out. Over the top of the standard Android interface Samsung has added it’s own Touchwiz launcher to give it a look and feel that’s a bit closer to Samsung’s other touchscreen phones. 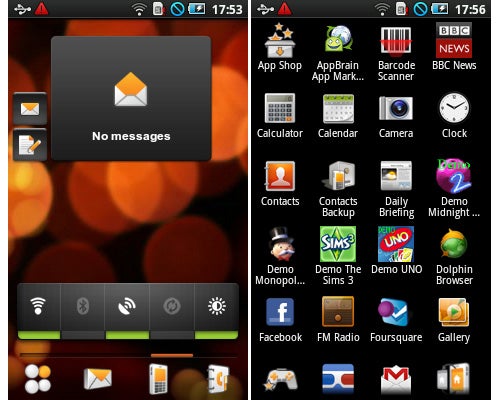 
The Orange (GT-i58001) version of the phone that we had in for review also has an extra Orange themed launcher. This only really differs from the Touchwiz one in that the main menu is presented as a list of scrollable icons whereas on Touchwiz they’re presented as pages of 16 icons that you swipe back and forth through. There’s also a few extra widgets here and there, but none of them are especially useful and overall we preferred to stick with the Touchwiz launcher as it looked crisper and cleaner. You can switch between the two via a shortcut on the home screen and thankfully the process is quick and painless as there’s no reboot needed. 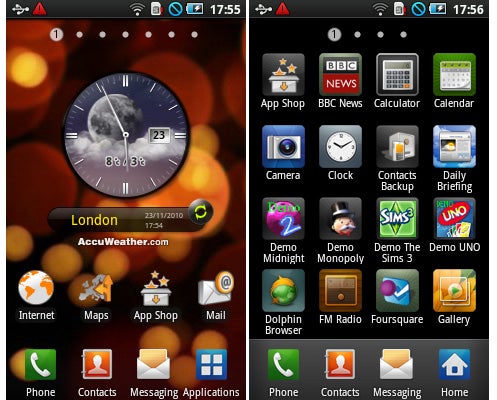 
Samsung has built the Apollo around an SEC S5P6422 processor, which is an Arm11 based design that’s clocked at 667MHz. Obviously it’s not as speedy as it’s bigger, more expensive brother, the Galaxy S, but it does feel quite responsive for day to day use and even when you have multiple applications open it’s quick to jump between them. The phone naturally has Wi-Fi and Bluetooth onboard, as well as GPS. It also supports HSDPA at speeds of up to 3.6Mbps, so browsing the web or picking up email while you’re on the move is very speedy. We had no problems with call quality either during out test period and battery life was good by smartphone standards as we managed to get around two days from it before it needed to be topped up with juice.


The Apollo also puts in a good performance when it comes to multimedia. Rather than rely on the standard Android music player, Samsung has instead opted for its own music-playing app, which looks slicker and includes some useful effects, including a pseudo 5.1 mode that adds a bit of extra space to the sound when you’re listening via headphones. The supplied cans are also a cut above the norm, as not only do they produce warm full-bodied sound, but also their in-ear design makes them comfy to wear and helps block out background noise. 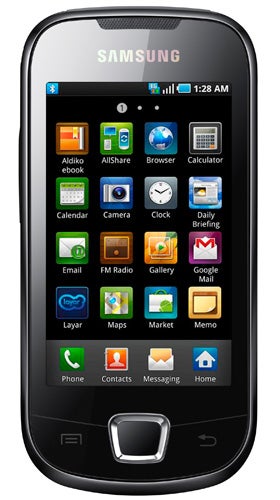 As well as the music player, the phone also has an FM tuner built-in, which is handy when you want to tune in and pick up the latest footy scores. As with most of Samsung’s Android handsets, the company has also added its own video player that supports DivX and Xvid files at resolutions of up to 720×480. As a result, it’ll play your collection of standard definition Xvid files without you having to first re-encode them to a lower resolution.


On the camera front, the Apollo is equipped with a 3.2-megapixel snapper. It’s a bit of a pain that there’s no hardware camera button, as instead you need to use the shortcut to the camera app that’s found on the home screen. The camera takes a few seconds to load so it’s not ideal for capturing quick one-off shots, but once it’s started up there’s actually not all that much shutter lag. The camera application is also very good as it has a number of built-in scene modes such as Portrait, Sports and Landscape that quickly configure the camera for the types of shots you’re trying to take. There’s also a neat panoramic snitcher.


Pictures generally have bright vivid colours and the camera does a good job of capturing finer detail. Perhaps predictably, though, given the lack of a flash, indoor photos don’t look so hot. Unless there’s a lot of light in the room colours tend to be darker and muddier than outdoor photos and indoor images suffer from a lot of noise too.


The Apollo has a lot going for it thanks to its speedy performance, multi-touch support, and good battery life. However, the small screen means that it can feel a little bit fiddly to use for web browsing and although it’s not exactly priced to an excessive level, it does look expensive next to the cheaper Orange San Francisco that we’ll be looking at soon. 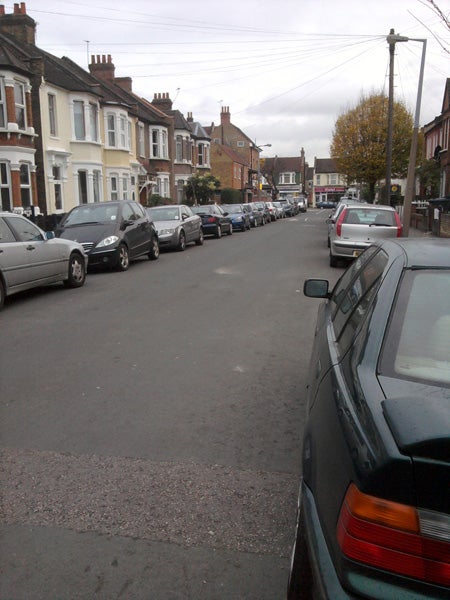 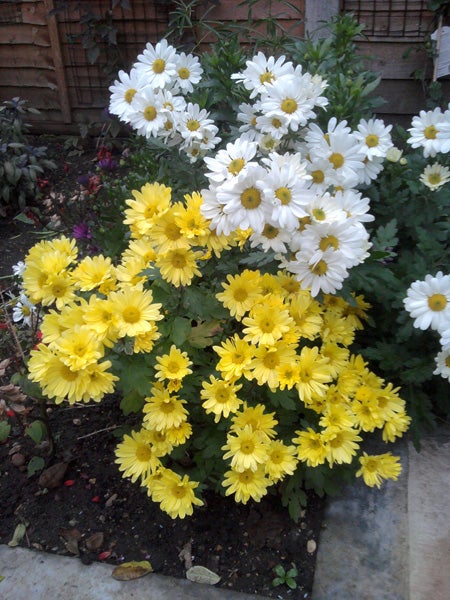 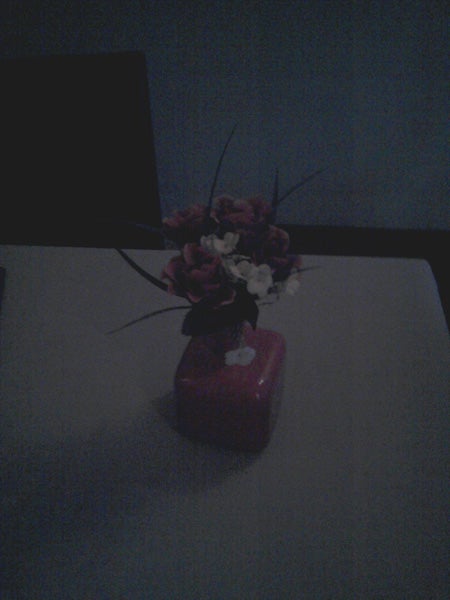